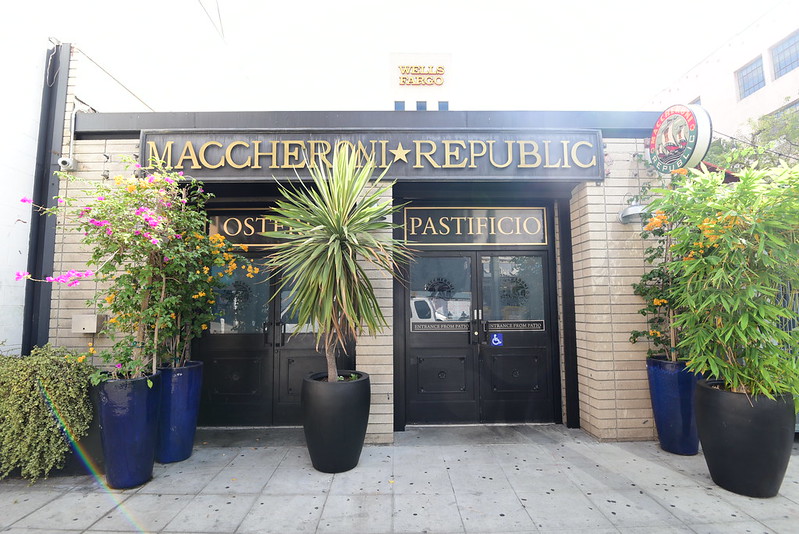 Maccheroni Republic specializes in "artisan handmade fresh organic pasta" at an affordable price point, and is quite popular in the city, having long waits (now made more convenient, with a Yelp waitlist feature). We decided to check it out for lunch during their DineLA week earlier this year. 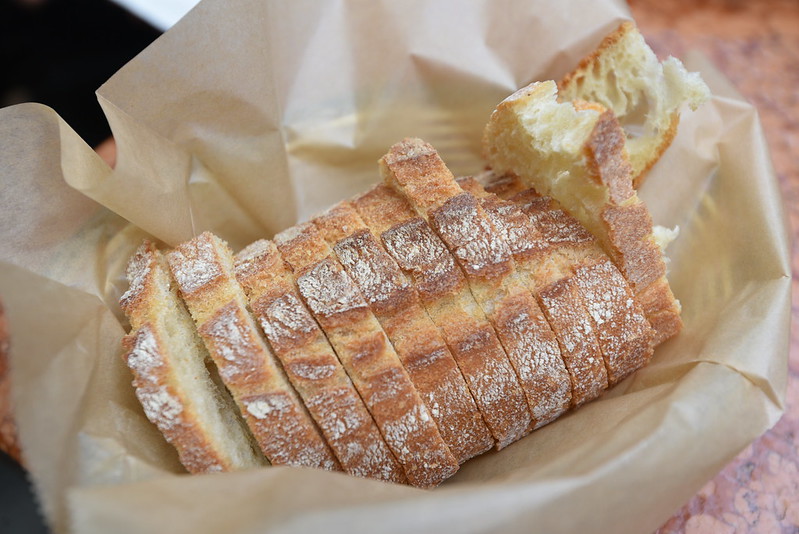 Stopping by at its opening time for lunch (11 AM), we didn't need to wait long for a table, as the waiters quickly brought a small queue of customers waiting outside to their seats both inside and outside of the restaurants. The interior was rather cozy with tables located quite close to each other, so we opted to sit outside, which was kept warm in a rather cool morning with several heaters.

Alongside each table was bottles of oil (both olive and chili) and vinegar to accompany the bread, which was crusty outside and soft inside.

We all decided to order from the DineLA menu (15 USD per person), which is replicated below:

Given that some of the individual pasta dishes featured on this menu could over 15 USD by themselves on the regular menu, this was quite a good deal. Our waiter placed through our orders via his iPad--quite a nice touch. 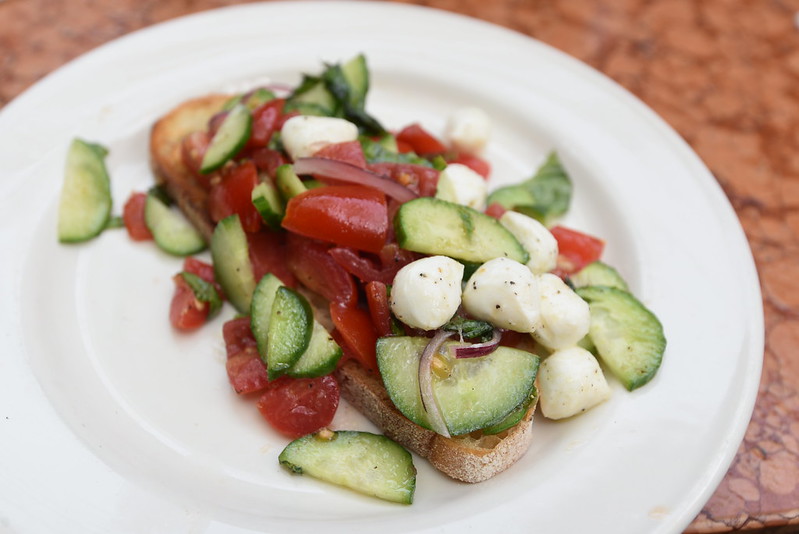 The first course of bruschetta di panzanella was quite refreshing, with the mix of small pearls of fresh mozarella with vibrant tomato, cucumber, basil, and onion on a lightly grilled piece of ciabatta that was still soft in the interior. Light on the seasoning, the flavors of the veggies really shone through. 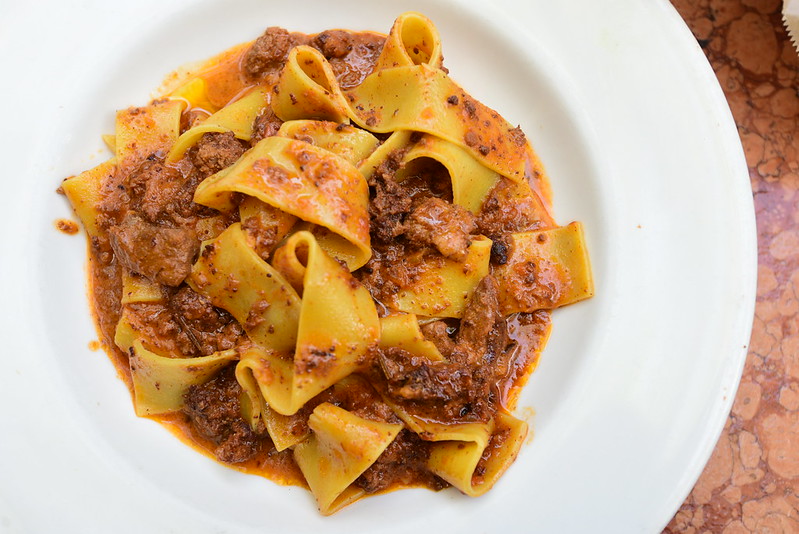 Moving onto our second course, my pappardelle al cinghiale felt quite robust, with thick, chewy, wide pappardelle and substantial pieces of wild boar in the ragout. Rougher textures and meaty flavors were the highlight of this dish. 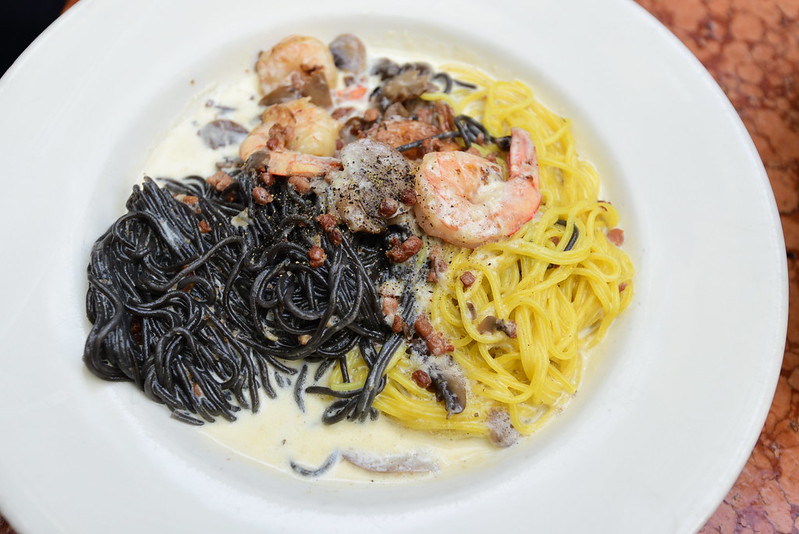 In contrast, the bianchi & neri felt smooth and refined, with thin yet chewy black and white verimcelli pasta and shrimp, mushrooms, and pancetta combined in a creamy bisque sauce. The sauce coated the noodles just right, and soaked up the flavors from the other ingredients. We really liked this course; it happens to  be one of the most popular pasta dishes here. 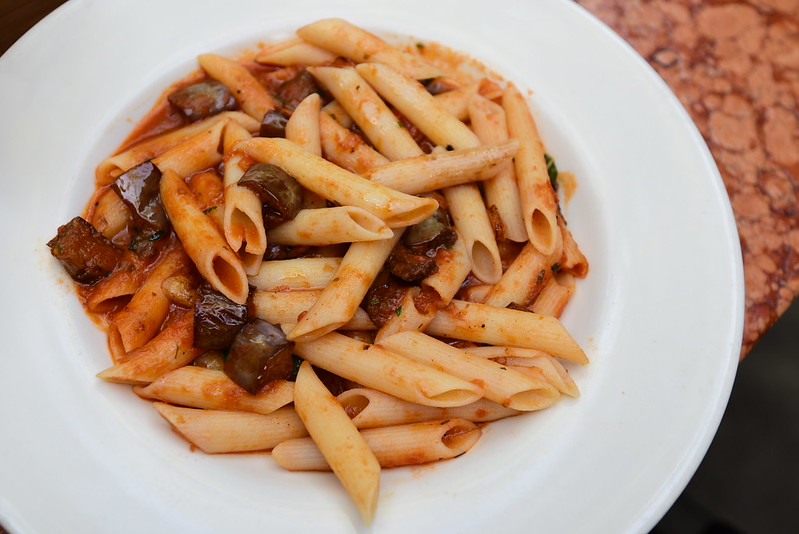 The penne di mais alle melazane was meant to be a healthier gluten free option, and that motivation definitely showed in the dish itself. It was rather light, with the tomatoes and veggies (eggplant, garlic, tomato) ever so lightly coating the gluten free pasta, which felt much less substantial than the regular grain based pasta. 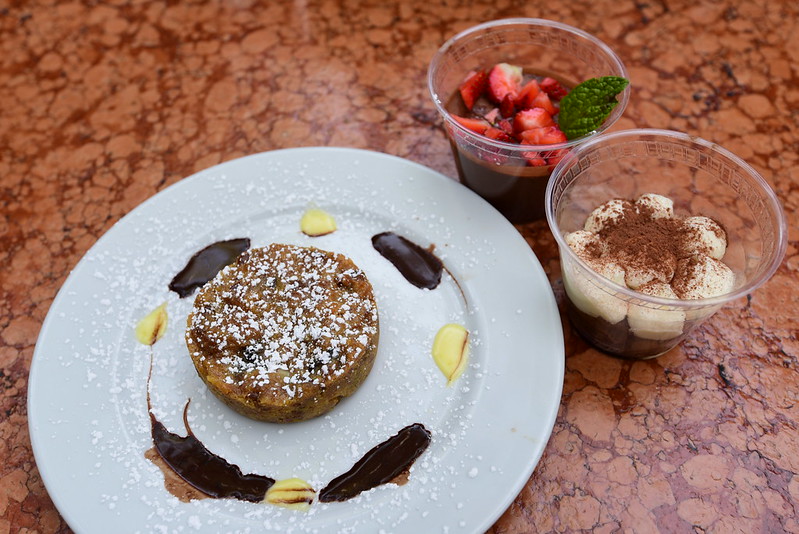 Interestingly enough, two of the three desserts were plated in plastic cups and lids; we were even given plastic spoons and forks to enjoy the dessert! Nontheless the convenient packaging (we ended up taking some of the mousse and tiramisu to go), the desserts were all quite decent.

If you hadn't told me the chocolate mousse was gluten free and vegan, I wouldn't have known, for it was quite creamy and chocolate-y. The tiramisu was a solid rendition with espresso soaked ladyfingers and marscapone and cocoa topping.  And the panetonne pudding was like a bread pudding, but with the bread substituted for sweet, fruity panetonne that was pleasantly accented by the chocolate sauces and powdered sugar.

Overall, a well-priced and tasty meal, especially with the dineLA deal. Maccheroni Republic also has many other creative creations on their menu, so I'll likely be back to try other items.

(The iPad came back for billing too, only to glitch out at the very end, not allowing us to give tips. Make sure to have some cash, just in case.)

P.S. Parking validation is available for the large structure behind the restaurant, reducing the parking charge to 9 USD.

©2008-2022 Eat. Travel. Eat! All rights reserved. No reproduction of any media and text without prior consent is allowed. Please read the Attribution and Copyright Rules if you want to reproduce content on this site, and contact me at eattraveleat (at) gmail.com. Privacy Policy.