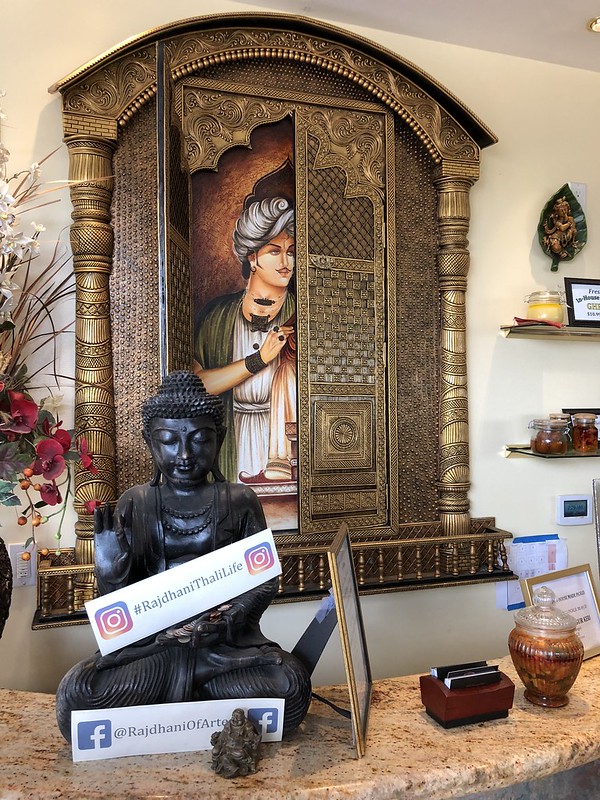 Recently brought to my attention was thali. Literally, it describes a metal plate in which is used to serve food. But, it also be an eating experience--where food comes in an all-you-can-eat format. Unlike a buffet however, the employees at thali restaurants serve the food directly at your table, refilling your thali as you progress through your meal.

A friend of mine noted Rajdhani Restaurant in Artesia, CA as a good example of such experience in the Los Angeles area. Known for its vegetarian thali, the restaurant is quite popular. Indeed, we waited for around 10 minutes before getting a seat.


The menu on our visit was as follows (check their website prior to visiting to see the menu for the day):

Meanwhile, the restaurant was quite active, with servers walking around with various breads, entrees, soups, and desserts. But soon enough, we were brought to our table, where very quickly, our thali experience started. 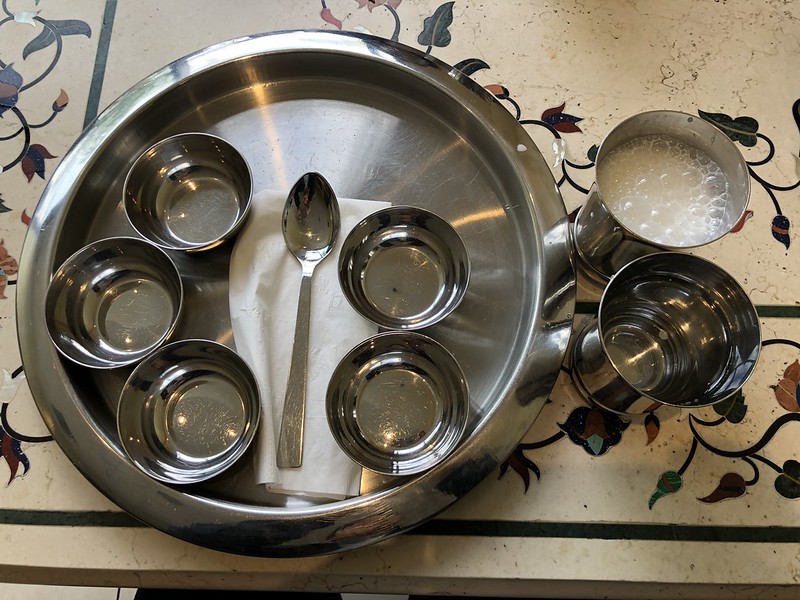 Our visit started with water and chaas, a butter milk drink that tasted like salted and spiced yogurt. As we were first timers, our server told us what to expect and introduced the three containers already on our table-- a sweet tamarind sauce, mild mint chutney, and spicy pickles. 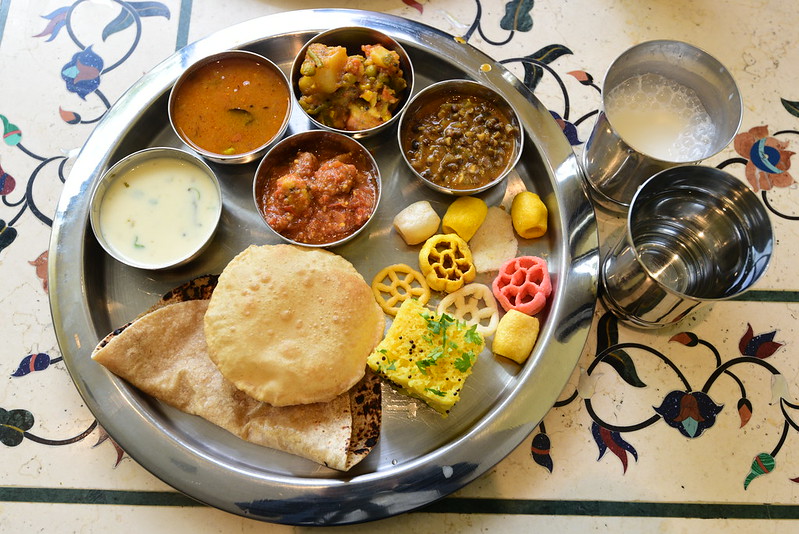 (Thali: Items Prior to Rice Courses (except for the potato bhajiya)

The next item that arrived was fryums, which is a fried snack (here, shaped like wheels, tubes, and chips) that were light and crisp, like shrimp or cassava crisps.

Next came three vegetable entrees: potato and mix vegetable, tomato muthiya (described as a tomato and dumpling entree), and dal makhani. Eaten on their own, these were extremely flavorful and savory dishes.

We next got some potato bhajiya, potato slices dipped in batter and fried (these were quite tasty), and puri, a puffy bread. Roti, available plain as well as lightly brushed with ghee, was noted as the main bread to go with the entrees. It served its purpose, being a good carrier to the flavorful entrees.

Dhokla, a rice and chickpeas based cake, topped with jalepenos and mustard seeds, came served from its own platter. Slightly sweet, this went well in between the entrees. 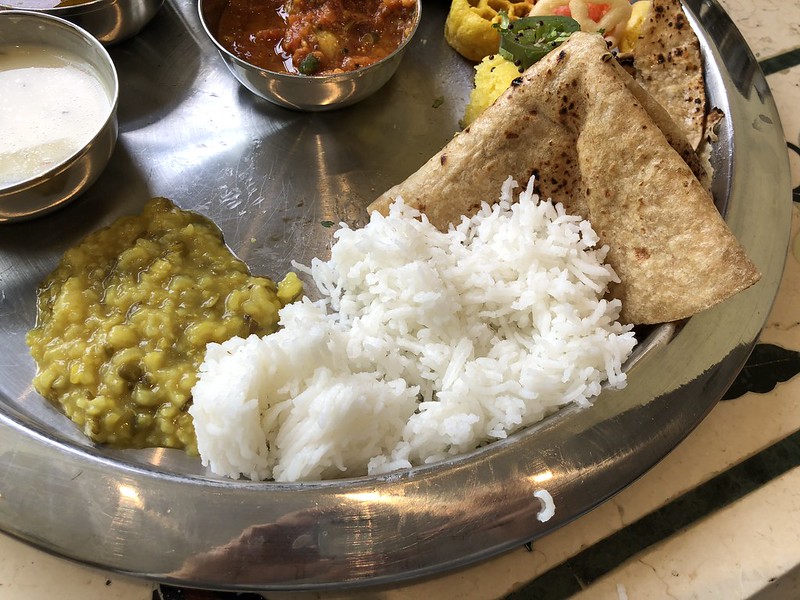 After a few refills on everything listed before (except for the fryums, which somehow only came once), we were asked if we were ready for rice dishes. which consisted of rice and khichdi. The khichdi is a green lentil and rice porridge, commonly eaten when people are sick. These also served as good palate cleansers and sides. 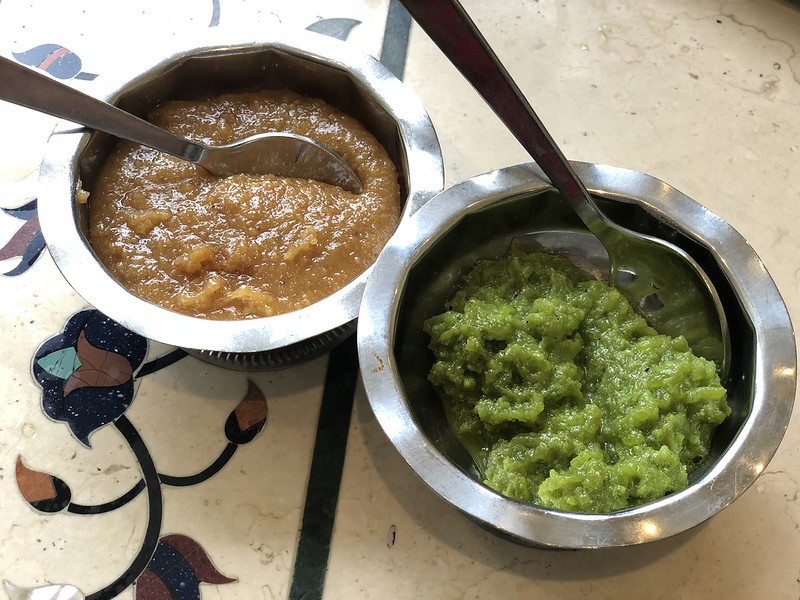 We closed with dessert, which unlike everything else, is not unlimited. We chose the dudhi ka halwa and the mohanthal. The halwa is typically made with carrots, but on our visit, it was made with squash and hence green colored. The mohanthal, made with roasted gram flour simmered in milk, sugar and cardamom, was extremely rich, thick and gooey. 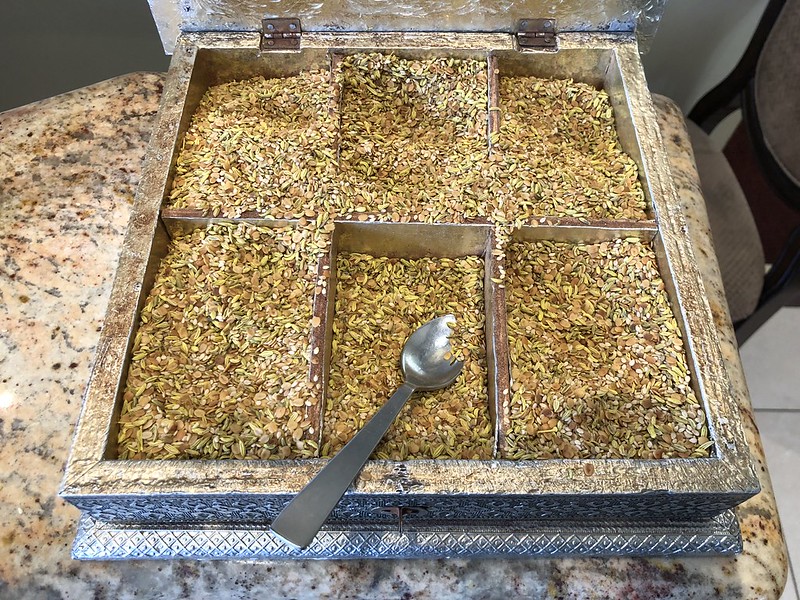 Overall, Rajdhani provided quite an pleasant experience with the service and range of dishes we tried. The only qualm? Some of the servers could be more careful with serving their food. We noticed that occassionally, their serving utensils would touch our existing food/plates. This could potentially be a health hazard if anyone they served happened to be ill.

©2008-2022 Eat. Travel. Eat! All rights reserved. No reproduction of any media and text without prior consent is allowed. Please read the Attribution and Copyright Rules if you want to reproduce content on this site, and contact me at eattraveleat (at) gmail.com. Privacy Policy.