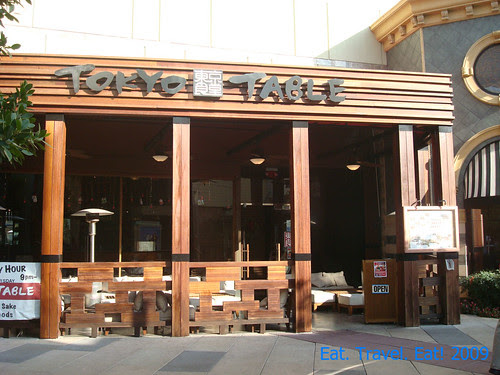 Tried something new and unexpected today. Although my friends have all been here at least once or more, I however, have never came here before. Yesterday was my day! Finally tried this place and was pretty intrigued by this restaurant. 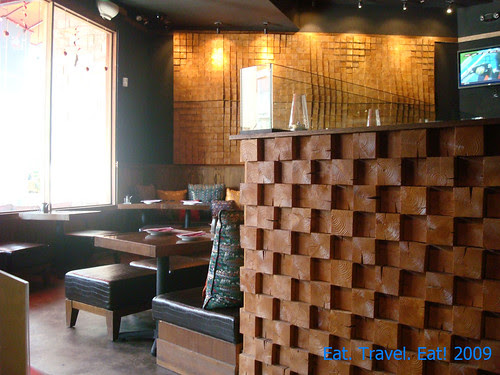 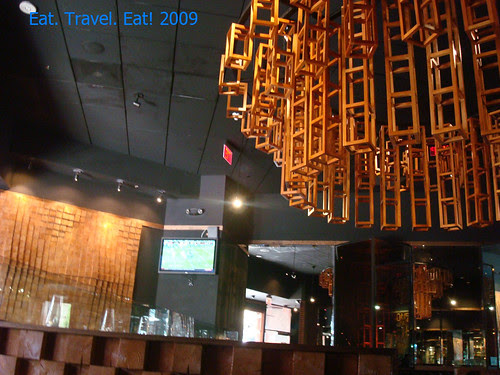 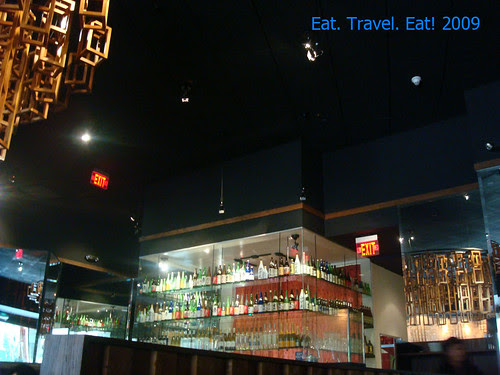 Near the back of the restaurant 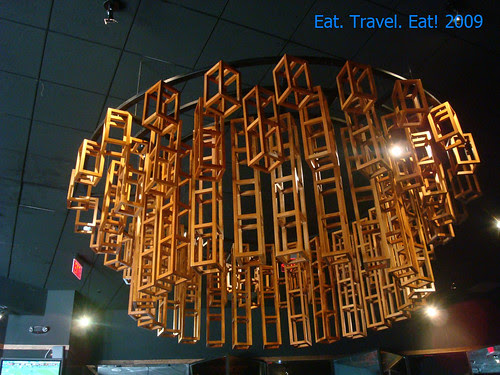 I found the interior of Tokyo Table to be pretty small, and also very dark. The old restaurant that used to have this space, Woomi Sushi, seemed to be larger. It's probably because Tokyo Table used a ton of dark colored things with touches of light colored items like this giant wooden chandelier on the top of this paragraph. We were seated at a round booster table. 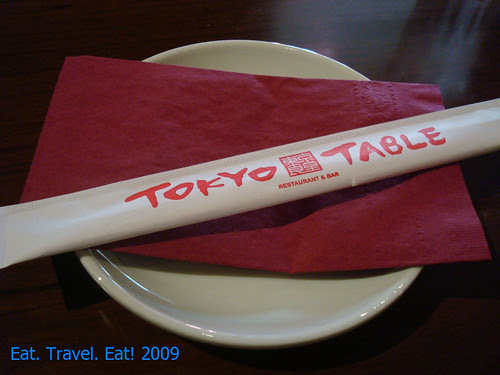 Each person got a table setting which looked like the photo above. This had a pair of wooden chopsticks (disposable), a red paper napkin, and a plate. 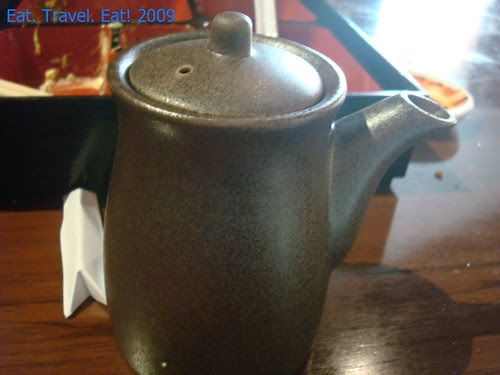 After a short while, a male server came to take our drink order. He ended up to be our server for today. Very friendly person, and very polite as well. He is also the person who stirred up our Sukiyaki Bibimbap rice later on. We ordered some green tea as well as some ice water in which about a minute or so was on our table. 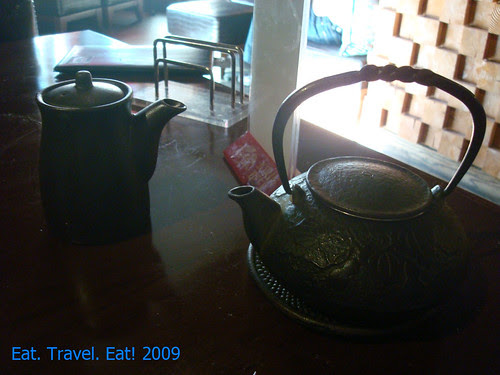 Together! The Soy Sauce Container and the Cast Iron Teapot on its stand 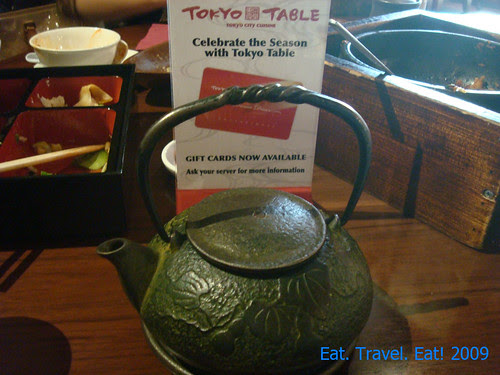 The green tea came in a cast iron teapot which wasn't really big, but very heavy! Our server constantly filled the pot for us. Green tea was very flavorful and not off tasting. I accidentally opened the lid and I found a ton of green tea leaves!
Shortly after that we ordered our dishes: a Tofu Salad, Healthy Bento Box, and a Sukiyaki Beef Bibimbap. 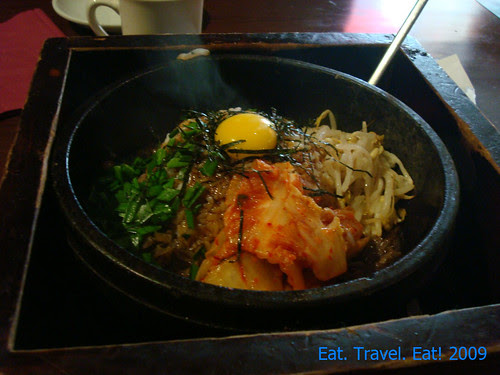 Our first item that came to our table was the Sukiyaki Beef Bibimbap rice. It was served in a sizzling stone pot and also in a wooden box. This helped as this way, it would be very hard to accidentally touch the pot and burn your hands. The description from the Tokyo Table menu says:"Korean-style mixed rice with sukiyaki beef, kimchee, bean sprouts, and Chinese chives served in a sizzling stone bowl" $9.95

It pretty much did taste like the description! The sukiyaki beef didn't feel like anything special, but it was slightly sweet. The rice seemed to also already have some sukiyaki broth as you can see in the photo,so that is maybe why they label this dish as so; but it really just felt like a regular bibimbap that was sizzling hot (which doesn't happen all the time). Our server also helped us add some of the hot bean paste while mixing.

Above is a video of our waiter stirring the bibimbap. 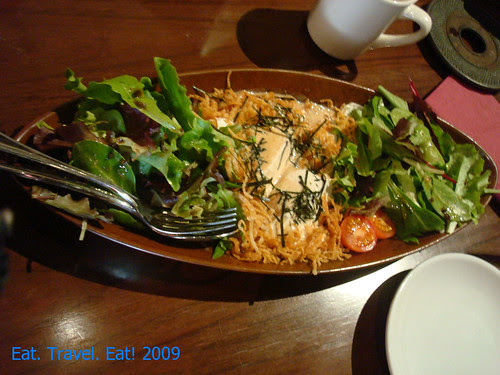 Tofu Salad
The next item to arrive was the Tofu Salad which was served in a long elliptical shaped plate. It was a great item! The family member that was ordering this wasn't sure about what salad that they liked last time, and this salad wasn't that salad though. That salad was actually the Cobb salad after asking our server several times. After a few bites though, we agreed that this salad was just as good! The fried wonton strips added lots of great texture, and the tofu was so soft and slightly warm. When all combined together it was a great flavor sensation!

Sesame dressing gave some great flavor as well, as well as some tang. We didn't taste much of the nori though, but as you can see it was in the salad! 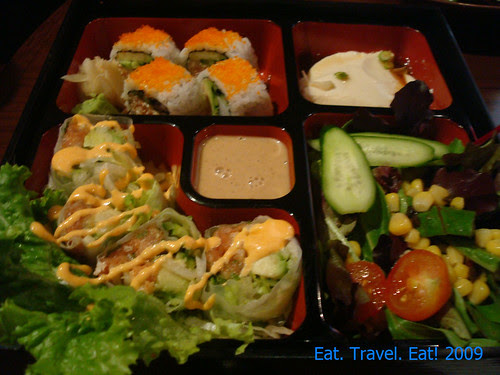 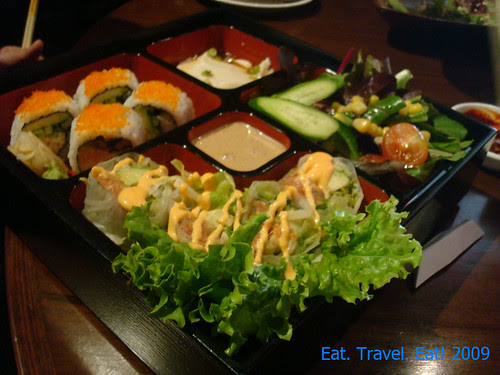 The last item to arrive was the Healthy Bento Box. The description from the menu reads:"California Roll, Spicy Tuna Summer Roll, Homemade Tofu, and Salad Served with Tofu Miso Soup." $9.95

Only problem though was that we didn't get the miso soup! It never came. I tried a California Roll, Spicy Tuna Summer Roll, and the Homemade tofu and they were all good. The homemade tofu was again very soft and silky. California rolls were very big, and actually had real crab, not imitation crab. You could taste the slight saltiness and the sea from the crab which was a nice touch though. One family member said the masago wasn't fresh though. Lastly, the summer rolls were pretty spicy. Lots of contrasting textures- the chewy rice paper, crisp lettuce, and many other components- made this a pretty interesting item. The tuna was spicy by itself though, but with the other items it wasn't that intense.

Overall a great restuarant! I finally went there for the first time and I was pretty satisfied. It is a little bit fusion like/ modern style though to me, but at least it tastes good! Some restaurants try to do fusion, but then they mix it up too much and label their things wrong which then makes the customer don't like the food. This restaurant though did a pretty good job with their fusion items. I'll be back!

Tokyo Table (located in the first expansion part of the Westfield Santa Anita Mall, nearby the old Robinson's May. Parking is at the back of the this expansion building near JcPenny- very big and tall parking structure- as well as other areas outside, and the new (not open but parking open) expansion part nearby Nordstroms and Macys)
400 S. Baldwin Ave.
Arcadia, CA 91007
(626) 445-4000