January 01, 2009
UPDATE January 23, 2011: I have flew on Cathay Pacific yet again during December 2010- for a much more descriptive and updated view on how Cathay Pacific's service from Los Angeles to Hong Kong please visit this post: http://eattraveleat.blogspot.com/2011/01/cathay-pacific-flight-cx883-lax-hkg.html

Below is the original post in its entirety:
____
I flew Cathay Pacific this summer with the new economy product and would like to give out my opinion about it...and plus since some people are asking about it online, I decided to make a post on it! (Please make note when I say HKG flight I mean flying out of HKG, and when I say LAX flight it is flying out of LAX) 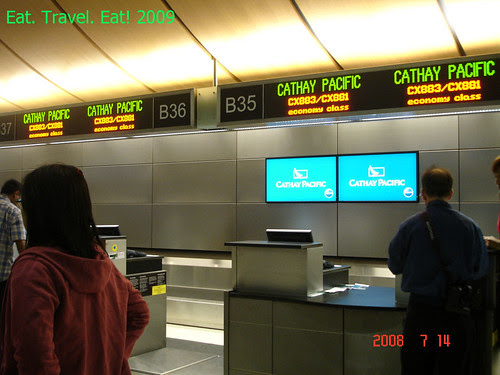 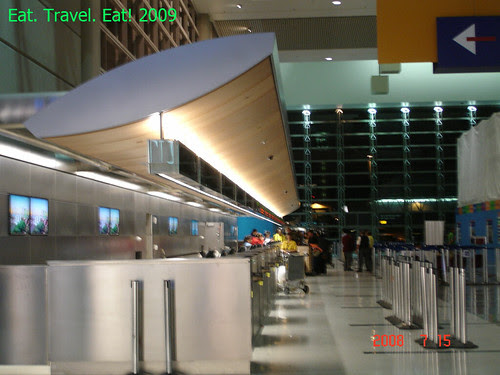 Anyway, we flew a overnight flight for the Cathay Pacific flight to Hong Kong. Check in at LAX was very easy and smooth. Staff and LAX people were very nice and helped us take a photo. Note- Cathay Pacific was the only carrier who used the new renovated part of TBIT. Pretty interesting. 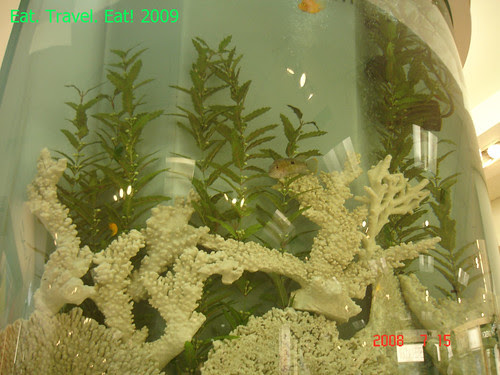 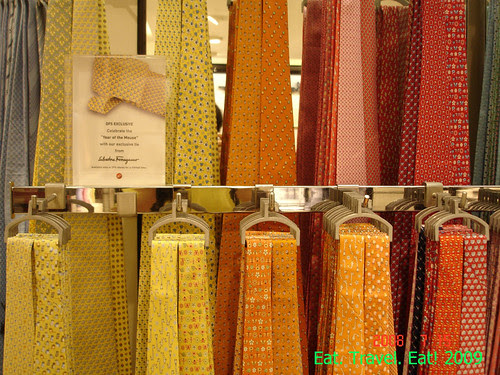 
Shopped around LAX, which was a pretty good experience, and sat around in the waiting area for some time. Cathay Pacific ground staff was very nice- at the check in to flight at gate area, one person helped us switch seats so two people could sit in three seats. That helped! 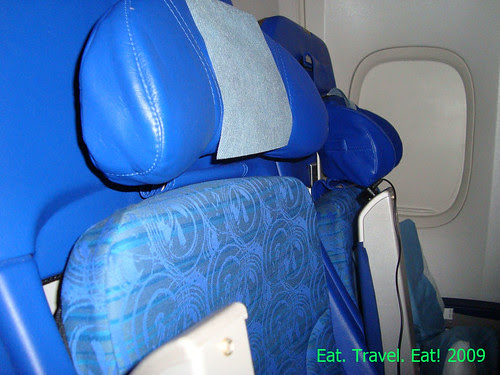 Seat. Notice the space between the seatback and the seat cushion- that is where the recline is! The seat goes down and forward which creates the so called recline.


Seats: Very nice. Haven't flown economy ever long haul (typically fly premium economy/business) and I was not disappointed! The seat doesn't recline backward ( no disputes about the reclining thing in one topic in the Air Travel forum right now), but actually downward and forward. The bottom cushion moves forward and the back cushion moves downward and more of an angle, creating the recline. They were designed in a green/teal and blue design, and the head rest is leather or maybe fake. The lumbar I didn't particularly like as it was mainly a piece of plastic that curved- you could feel it. 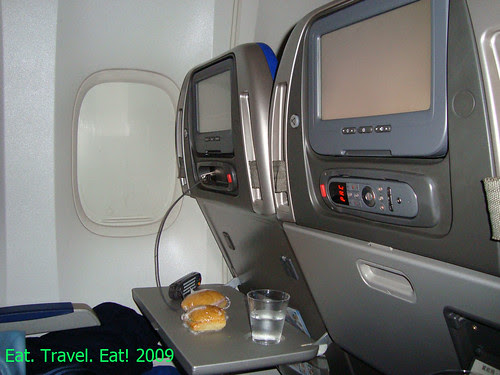 Sandwiches and Water. There's a plug in port (black square near top of water cup) too.
10:34PM 1/1/2008: P.S. I was looking at this photo and this was actually during a reboot section! If you look carefully the far screen has loading and a bar while the closer screen is white- about to start up. This type of situation happened several times on both of the flights!
Tables were a interesting way to open. There's a lever and you pull down on it and it releases the table. And then you pull the lever up to secure it back to the seatback. I didn't like this as it wasn't very secure, and I splashed some soda onto myself once when using the cupholder, in which comes out from the backside (the part that faces you) of the table.


TV/Entertainment System: Very nice! Lots of shows to watch and I never got bored. Tons of TV episodes, movies, music, games, and more. Also background info about destinations too. Airshow was also of a different quality. 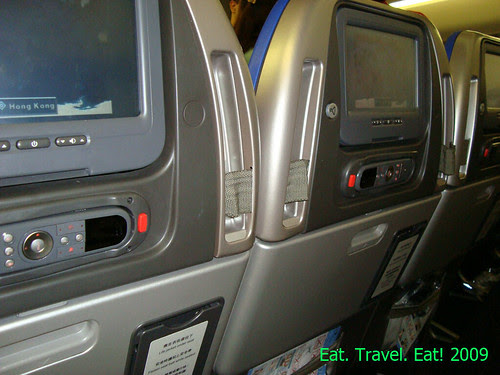 Seatbacks- showing the Airshow right now.
Food: Sort of disappointing for Cathay Pacific. I've flown their business way back then and the food back then was way better (but yes...one shouldn't be comparing between classes, right?). But this was BAD! The entrees were so-so and it seemed like things had chemicals added to it or were not fresh. Salmon had a fishy taste, and the beef was unrealistically tender (not good). However, the cheesecake was really good- firm and creamy. It was however, extremely fluffy on going back from HKG to LAX. Fruit was well, and the salad was pretty good.
Instant noodles were Nissin and were good as always (from HK). Night snacks were also delicious, but the sandwiches from LAX to HKG was not great. Also got ice cream, in which from LAX was Haagen Daz while HKG was Nestle. Sometimes the staff don't like giving out ice cream- so you have to ask them multiple times.
Breakfast was okay- much improved. Congee on one flight was delicious, but the rice noodle roll on the other flight did not taste as great (but it has been sitting for 13 hours on the flight- and that is pretty good for rice noodles to taste chewy still after so many hours after production). High quality yogurts too- if I remember correctly they used the "Emmi" brand. 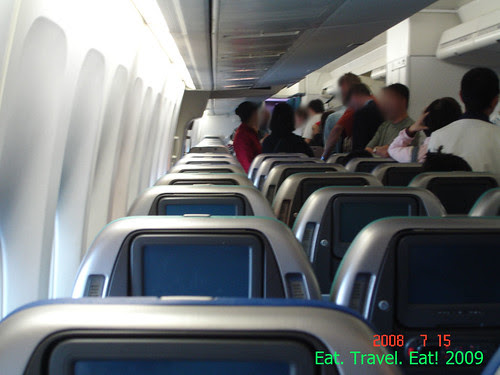 Leaving the 747! People leaving the plane at HKG.


Service: The LAX staff didn't worry about things as much, and the HKG staff were more worried as it was a full flight. HKG staff was also a little too pushed and demanding.
LAX staff on the plane was not really worth of Cathay Pacific service- it was worse than domestic airline Jetblue!!! Jetblue service people gave out water throughout the whole flight. But on Cathay Pacific for the LAX flight, you grab it yourself or very rarely get it from a flight attendant. HKG staff however did make rounds throughout the flight, but not often compared to Jetblue.
Somehow we received menu cards on the HKG flight, but didn't get one on the LAX flight. We found a old card though on the LAX flight but it wasn't what we were having!
Overall it was okay. Hope my experience helps! Here's some other pictures from Hong Kong International, and on the plane. 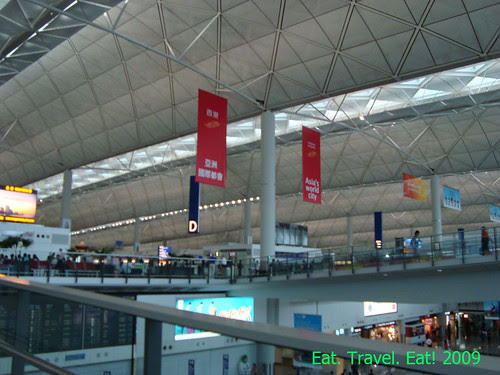 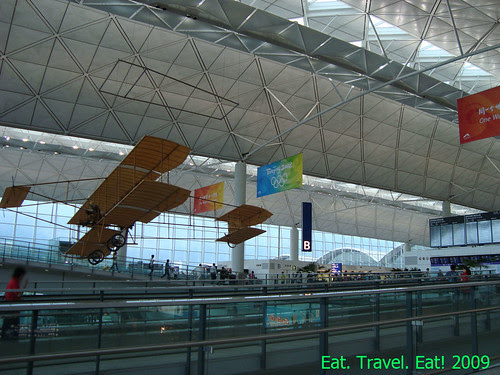 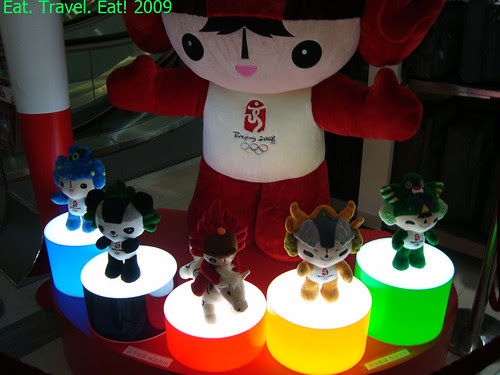 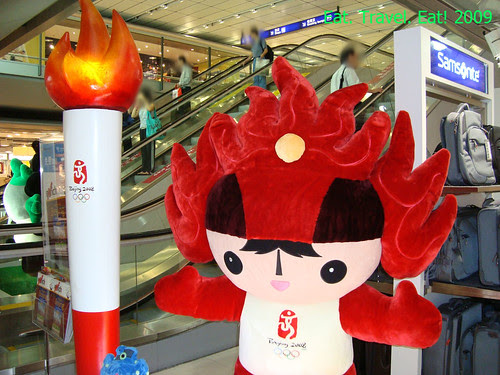 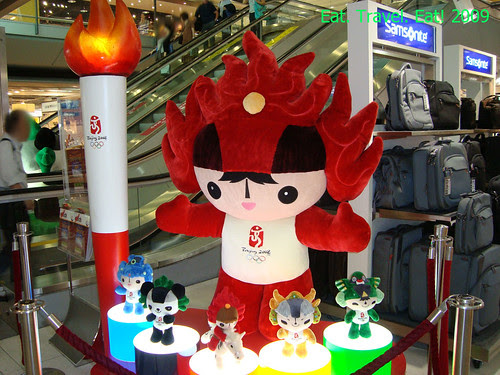 Wing Views during the LAX-HKG Flight (none going back as we were in the middle seats): 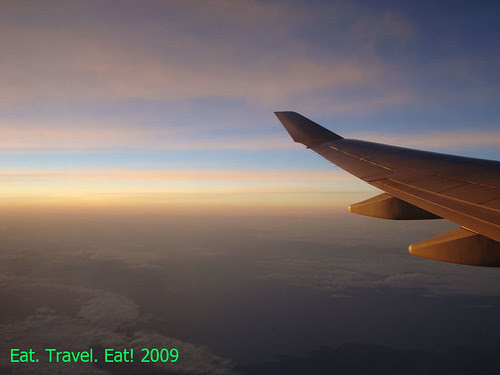 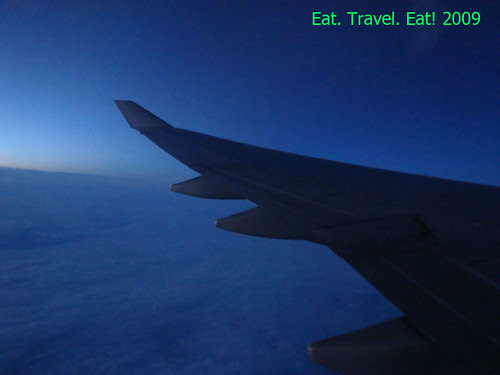 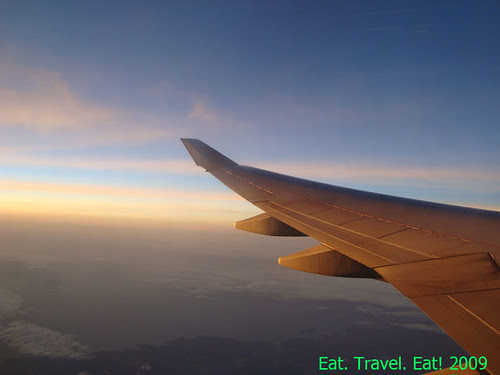 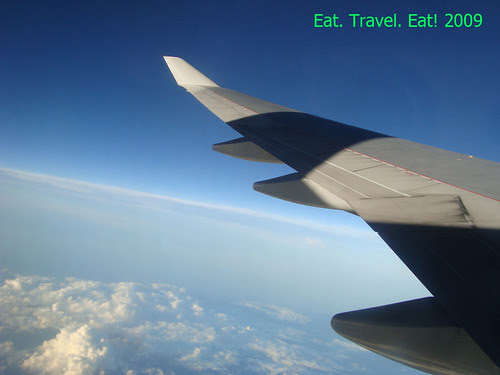 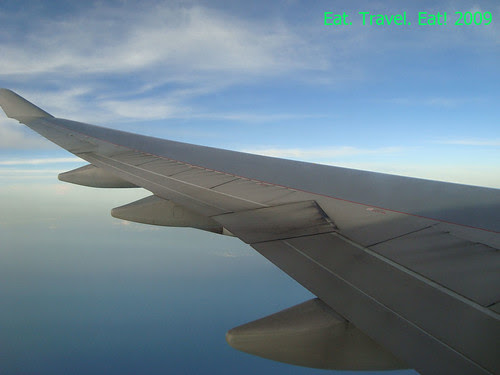 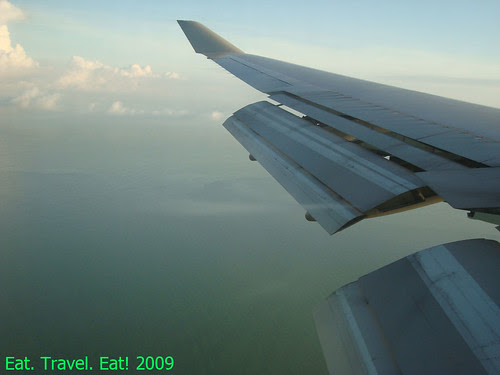 Takeoffs and other views: 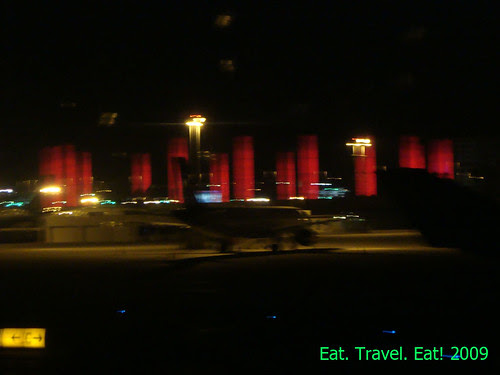 LAX Takeoff- trying to take a photo of the lights! 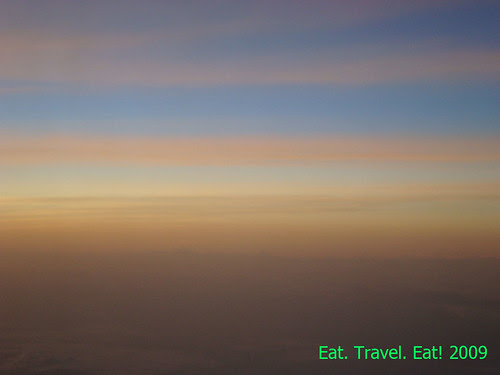 food makes me happy said…
I like a serious of airplane pics!
Everytime I tried to pull out my camera to shoot a picture on the airplane,
The people next to me always look at me like I'm a weirdo, oh well, they don't understand!
January 01, 2009

EatTravelEat said…
Thanks for the comment and thank you Cindy for visiting! Did you know you were the first food blog I read in my life? And then later on I started to read other blogs and then finally start commenting.
Anyway, I agree about those people! They do sometimes look at me like that when I take a photo but that happened once and once only. One guy even teased me for doing so! Since I am young he thinks I am crazy for doing so but he didn't understand why I was doing so (airline complaint!).
Some flight attendants sometimes even ask people why they take photos...Like you I think these people do not understand what we are going to do with these photos! They can be helpful to people at times especially on some airlines when they don't talk much about their classes.

BDK said…
Thanks a bunch for the info. I'm flying Cathay Pacific LAX - HKG next week and was relieved when I read your blog. Much appreciated. Great pics too. Cheers.
June 27, 2009

EatTravelEat said…
BDK,
You're welcome! Good luck on your trip. You'll find the LAX to HKG leg to be just a bit more empty compared when coming back.
June 29, 2009

©2008-2021 Eat. Travel. Eat! All rights reserved. No reproduction of any media and text without prior consent is allowed. Please read the Attribution and Copyright Rules if you want to reproduce content on this site, and contact me at eattraveleat (at) gmail.com. Privacy Policy.