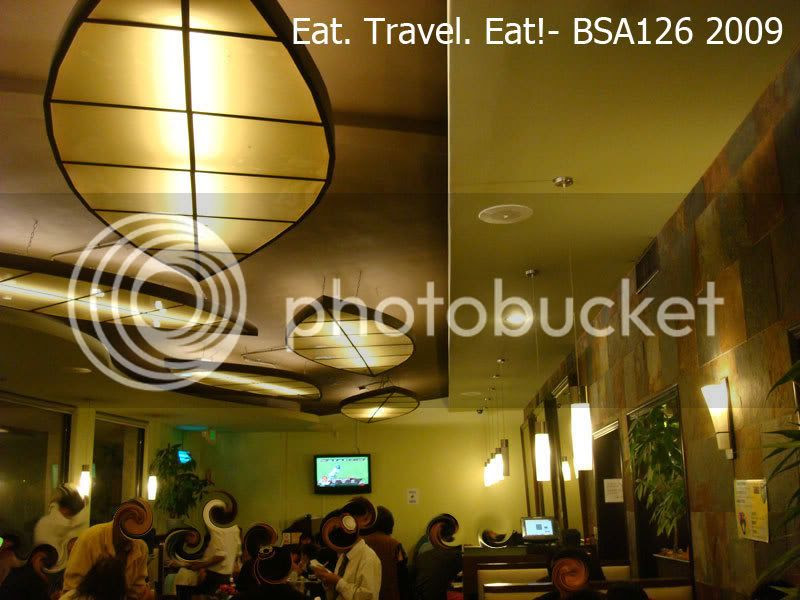 It's not everyday we go for afternoon tea. It's only when we are in a situation where we have to eat lunch late or dinner early. And this visit was one of the days we needed to eat dinner early.

Why here? We didn't even know if Garden Cafe had a afternoon tea menu; Tasty Garden does however. But while driving, we did not get a chance so that we could turn into Tasty Garden. So, not wanting to make a U turn, we headed up to Garden Cafe which was on the route. 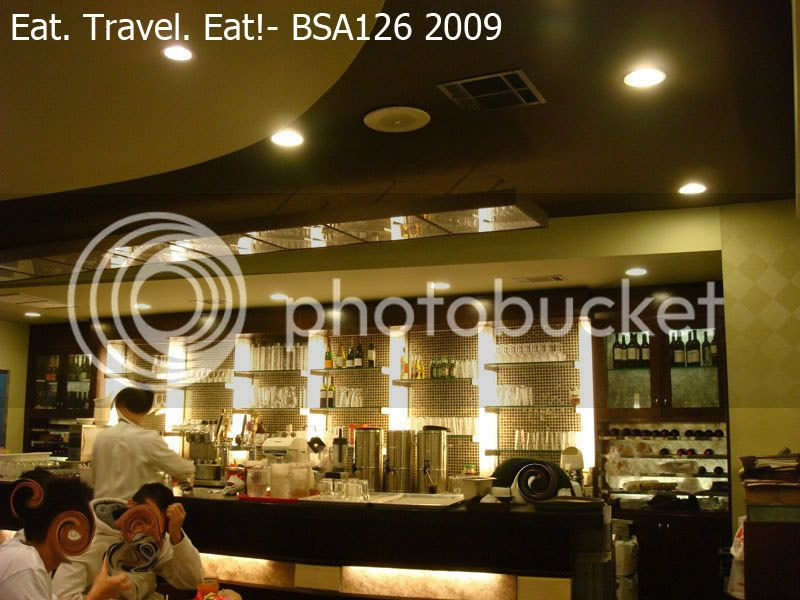 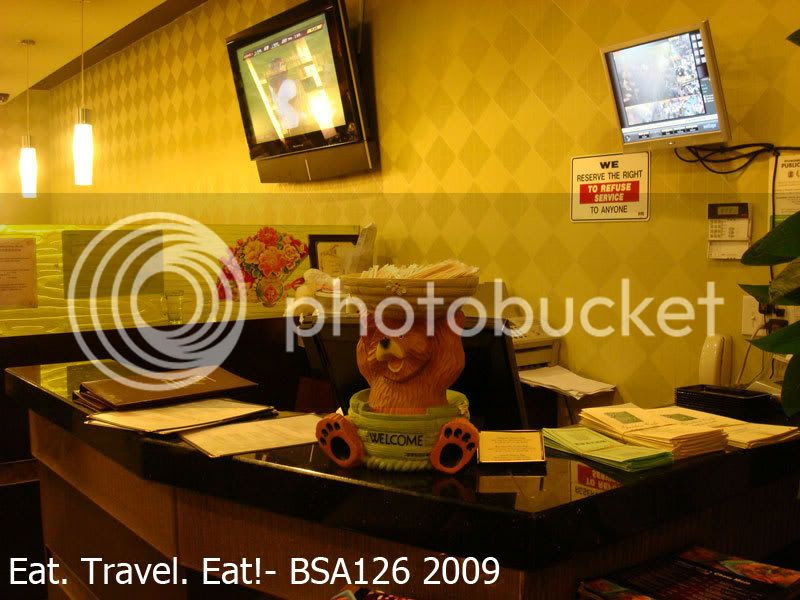 The interior obviously, inline with the other Garden Cafes, is very modern. When I first went here for the first time, I thought WOW. This design was not very familiar; it was instead striking and very intriguing. However, as time past, we got used to it, but it definitely feels very contemporary. The Arcadia location seems to be the one who started the new design language- the other locations of Garden Cafe then played copycat and renovated to look like the Arcadia location. 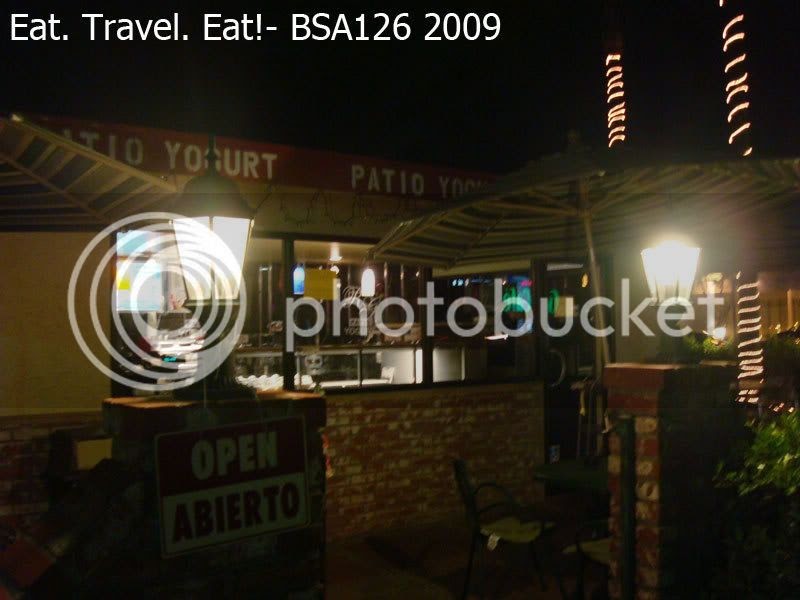 (Frozen Yogurt that they own. A lonely place!)

And besides the Garden cafe itself, there is also a Frozen Yogurt place, obviously to attract people who love froyo. The charge is the same as Pinkberry, or almost. 3 toppings is 4.95, 2 toppings is 3.95. I've only seen one customer eat this though, and the final product didn't look like what you would get at Pinkberry or some place which you don't serve yourself. It was more...messy and not as nicely decorated/swirled.

And before we get off topic towards froyo....

The afternoon tea menu was GREAT! There were many selections; you could make a HK noodle soup and pick from two toppings (including things like wontons,etc.). Items like Roti Paratha with curry sauce were on the menu, as well as chicken with E-Fu noodle and many other items. I would come here again for afternoon tea as the items are more interesting compared to Tasty Garden. But Tasty Garden has its HK Egg Waffle for its advantage. Plus, Garden Cafe charges 50 cents more for a iced drink, but you can get hot tea or coffee for free. 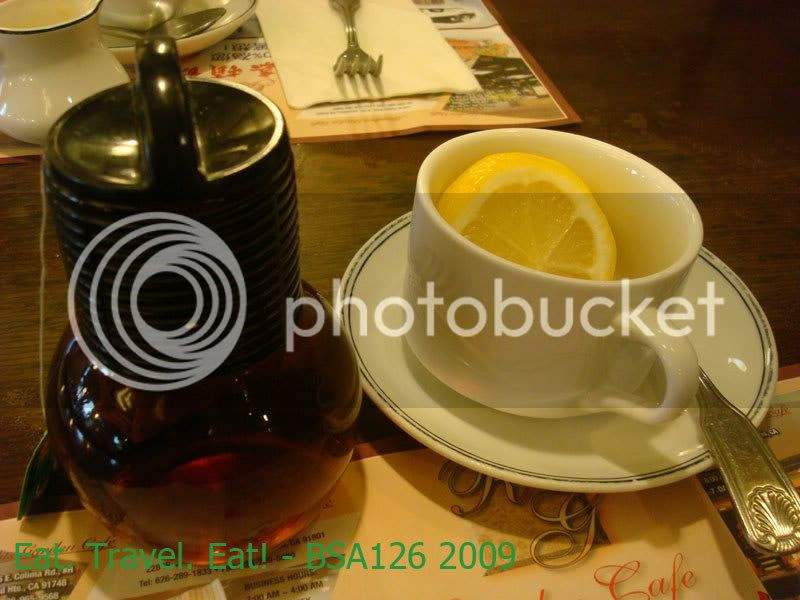 And here is the hot lemon tea. Mash the lemon and the sugar together, and then adding the tea makes a great lemony breverage. 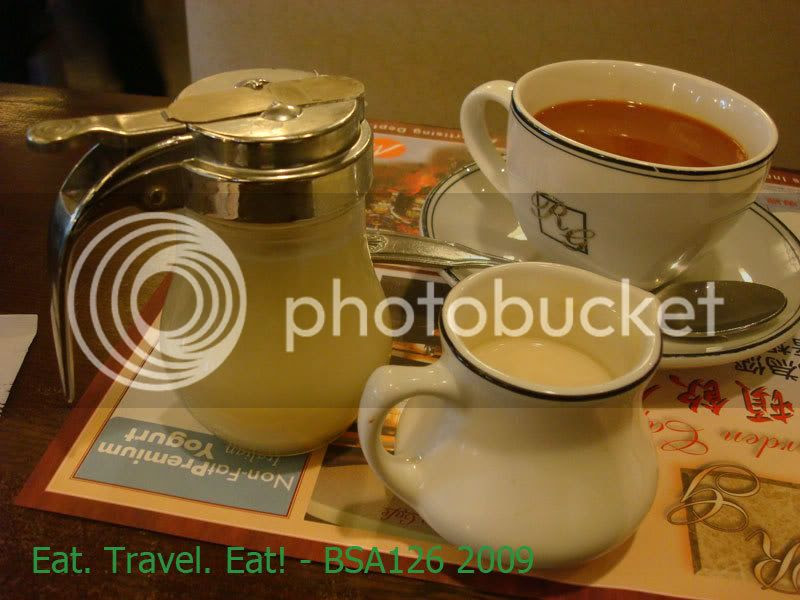 And here is the hot milk tea, which was also free. It came with some evaporated milk as well as condensed milk. The milk tea was very smooth, and had a very bold tea flavor. Very good! We also liked the addition of evaporated milk; it's better for the people who don't want their milk tea to be too rich (by the condensed milk). 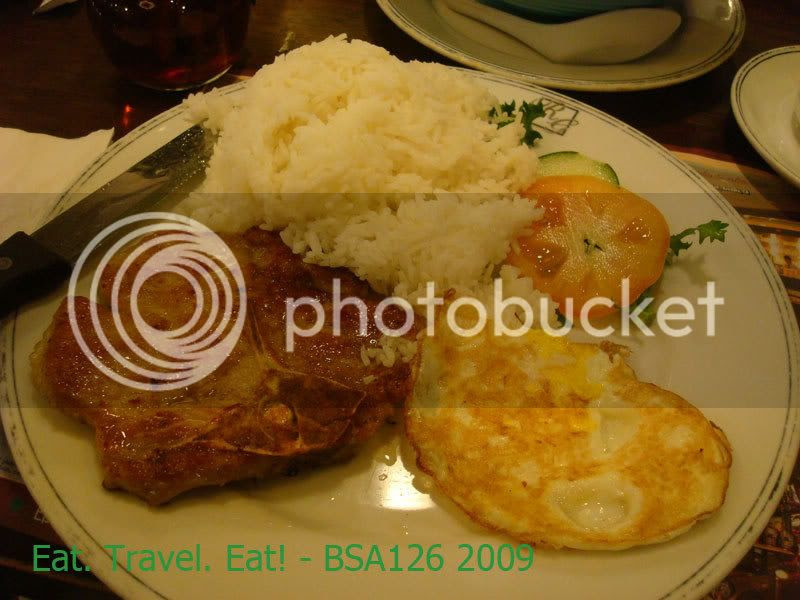 My dish was the lemongrass pork chop with egg and rice. This dish seemed like a copycat of the Vietnamese grilled meat on rice dishes, but without the nuoc cham on the side and no pickled carrots. The pork chop was similar to the Vietnamese grilled meats, but not as bold as those meats, and you could also get some lemongrass flavor, but not a whole lot. The egg was crispy, slightly greasy, and cooked just right. Pretty good dish in general! 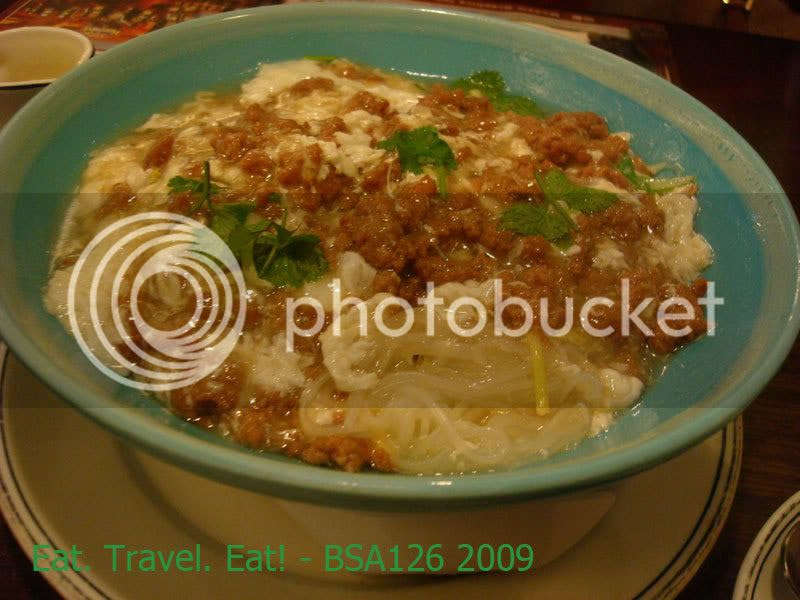 We also ordered a Beef with Egg white on rice noodle soup. As you can see, there is almost NO soup on this! The beef and egg mixture tasted like West Lake Beef and Egg white soup; slightly peppery. Cilantro also was again a copy of West Lake Beef and Egg White soup. Slippery rice noodles with a good chew were also added in a big mound. In the end, we asked for some soup, and they gave us some soup; and they didn't charge extra! The soup is a simple meat stock. 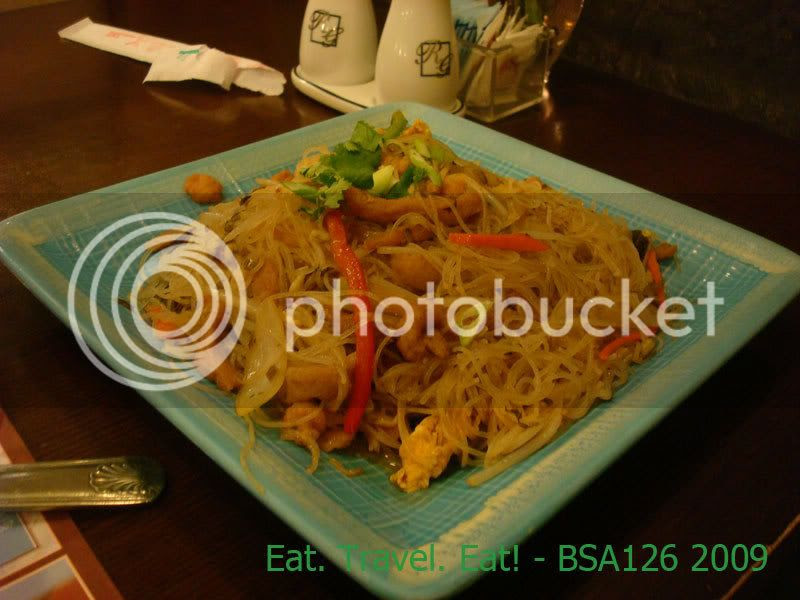 And we also got this regular priced chicken rice noodle, which came with egg, vegetables, and some preserved vegetables. The rice noodles were just as good as the beef and egg rice noodle soup even after microwaving later on at home.

And as promised, here are some extra photos to look at. They are on Tripadvisor too :). 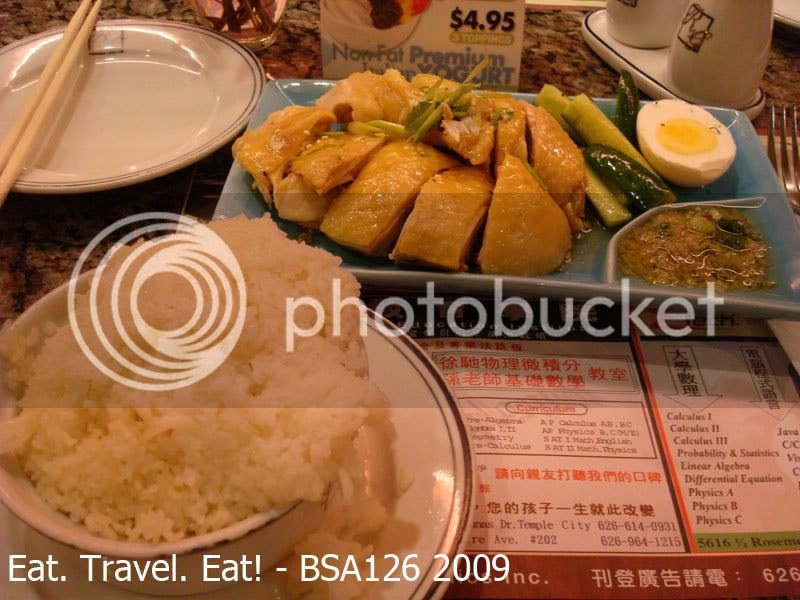 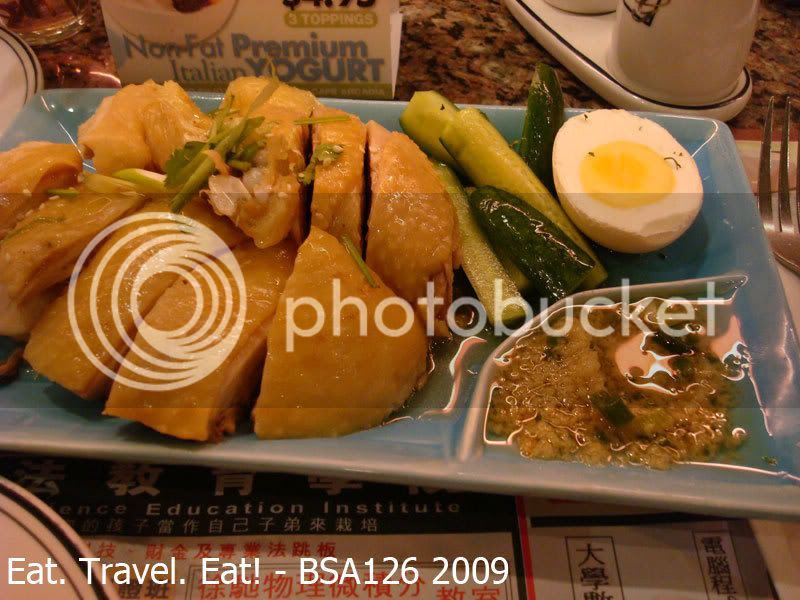 Hainan Chicken Rice. This dish is pretty good; the meat is flavorful, and the rice has a very good chicken flavor. Cucumbers have sesame oil on them and the ginger and green onion oil is great on rice. 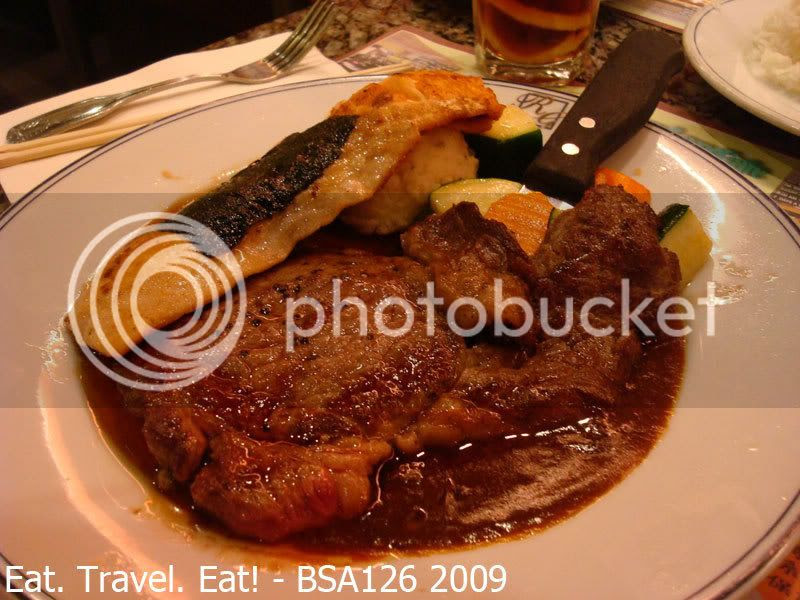 Surf and Turf- two different meats on one plate. 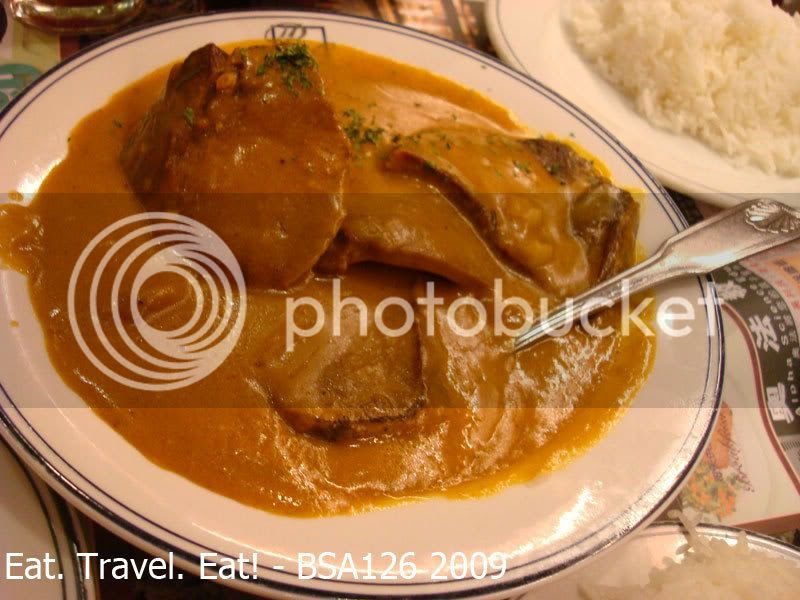 If I remember correctly this was the beef tounge curry. 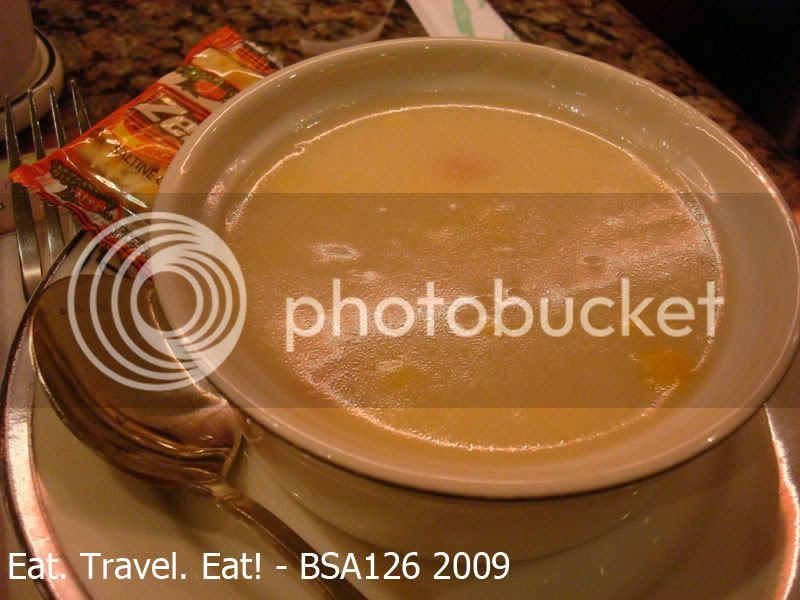 And lastly, here is some complimentary soup with saltine crackers. You can chose from a "Loh Shun Tong" (like a milestrone) or the cream soup (corn and ham). This is obviously the cream soup.

shavedicesundays said…
I never knew these places had afternoon teas. Thanks for the info! This is great news for my girlfriends and me.
January 26, 2009

EatTravelEat said…
Same for me here! Although most HK style cafes have some sort of afternoon menu, not many really advertise it. We were lucky to find this out or no one would know!

And since no one really knows about it...only about 4 tables were filled during our visit. The rest of the restaurant was empty!
January 27, 2009