January 11, 2009
After reading great posts about Lotus of Siam, we decided to go there for this trip. Talks about the great pad thai and the crispy mussel omelet seemed so intriguing. And so, we reserved a table for 5:30.
...

It's 5:30. You drive to what looks like an empty mall. Are you sure this is it? It doesn't look like it. However, a photo from one food blogger shows that this place is it; but, the lights are closed! Look carefully though, and you see people waiting outside the door to enter the restaurant. It's like at Din Tai Fung in Arcadia where people wait outside before it opens.

2 minutes later, the lights open, the doors get unlocked, and you go in. One look tells you that you are in the right place. Like what the food bloggers have said, this place doesn't try to act "cool". The decor is simple, and somewhat outdated. Photos of famous people, including Tyler Florence, were all over the walls. Some oil paintings were also put up.

You walk to the table guided by one of the servers, and as you walk by, one table is put just for ice water. Why is this??? You'll notice later, when one of the members of the party gets spiced by an especially spicy chili.

People have said that this place can give you really spicy food. And it is really true. And you know it is authentic. You just know. One bite of anything shall make you interested.

As for what you shall eat, you aren't sure. There are so many intriguing items. You decide to stay with normal items and ask what is best according to your server. And the server says the crispy mussel omelet is nothing spectacular; it's pretty much normal. "Are you sure?" you ask. And he replies yes. No one else ordered it as you can see. But the food blogs have said so much about it. But Mr. Server's opinion has taken over. The decision is no :(. 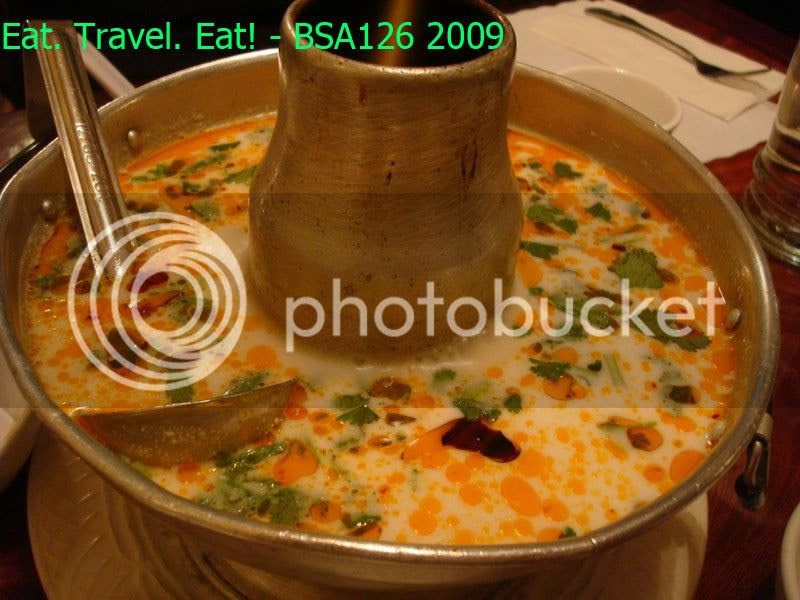 So, the starter for this visit will be Tom Kah Chicken Soup. Being a very cold night in Vegas, you suspect this will warm you up and make you want to eat more, and it is true. The flavors were intense, spicy, and creamy. It had a great coconut flavor, but was also very spicy (we ordered medium). So spicy to the fact it would spike one member of your party and make him not want to eat anything for 10 minutes. So spicy, to the fact that he lost his taste and hunger for about two days. This is what can happen if one accidentally bites into a chili. However, that chili was green. And miniscule. You won't see it. Be careful when eating this!

Only negative about this dish? The chicken. It was dry and not flavorful at all. The server was surprised; he was wondering why we weren't eating it. But we ate it later on. 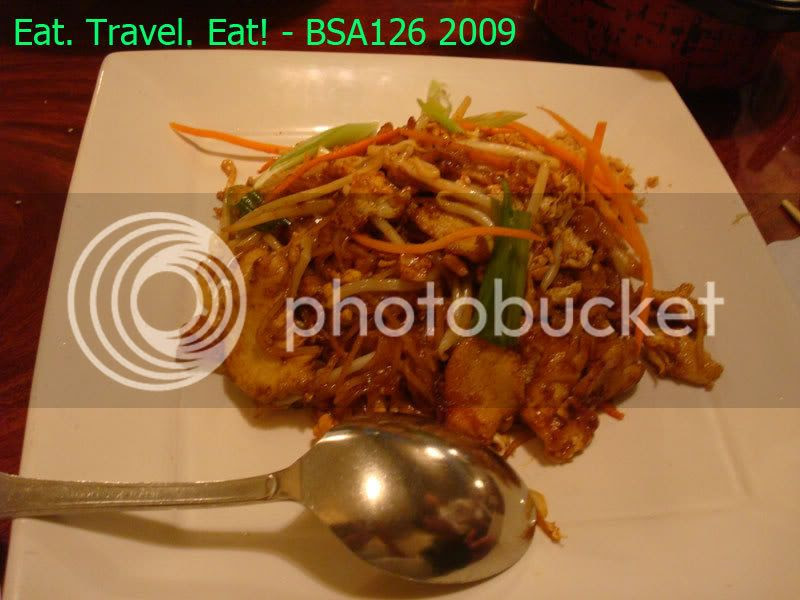 Pad Thai. This was pretty interesting, but the serving size? Small. Very small. Smaller than what some food bloggers took pictures of. But the taste? Pretty good. Would have liked some lime or lemon, but if the authentic way to eat it is without we'll take that. The flavors were intense; the noodles sucked all the sauce, and they were pretty thin compared to one's usual Pad Thai in California. Everything was mixed in for you; you didn't need to cover anything this time around. The noodles were chewy, and not too saucy at all. 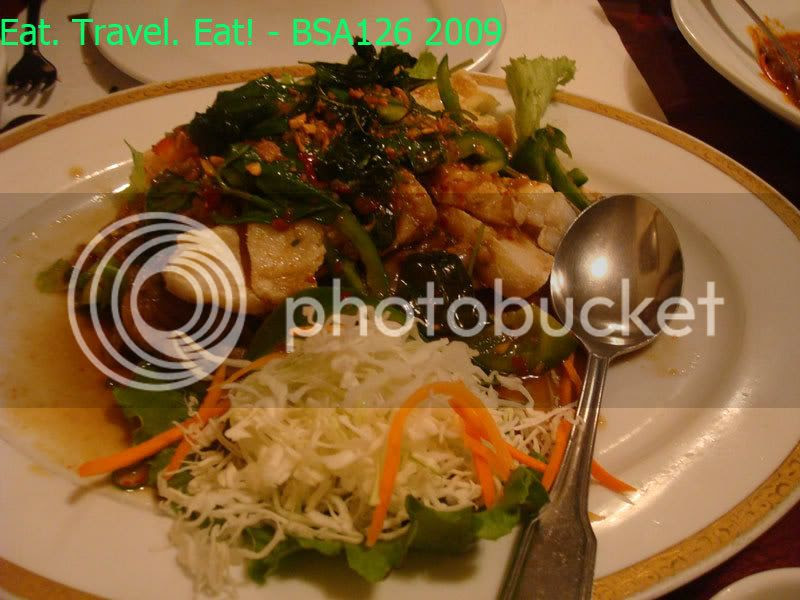 Drunken noodles Seabass was recommended by your server. "It is fresh," he says. And it tastes really good. The seabass is lightly coated and fried not to a crisp, but just enough so the outside is crispy, but not hard or dry. Interior of every piece was tender, succulent, and simply delectable. Sauce added on the side gave it some great flavor, and pan fried rice noodle sheets were on the bottom. Basil and the spices gave the dish much flavor, and you sopped up everything. 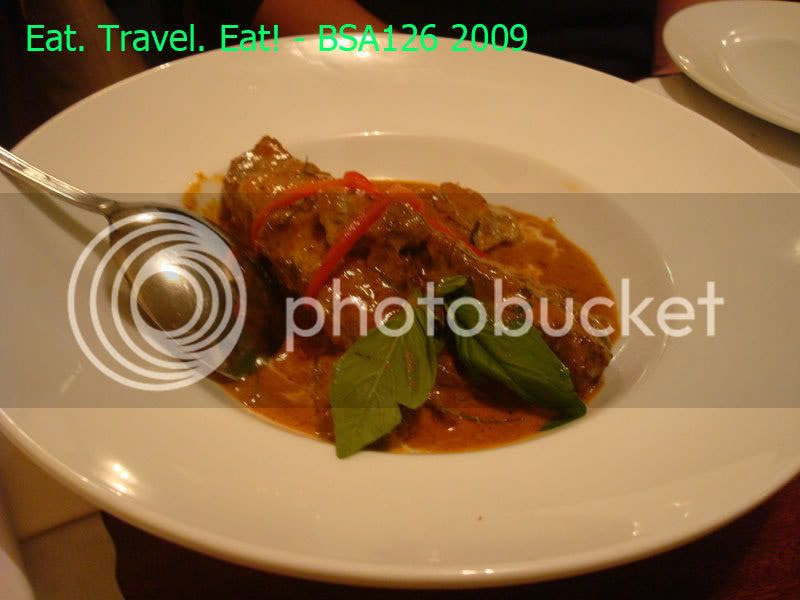 Another recommendation by the server was the short rib curry. This was pretty good; you knew it was authentic when tasting the curry. No, it was not a simple curry paste mixed with some coconut milk. It was pounded spices with coconut milk. You have tried this style of curry in HK where they pounded the spices, but it has never happened in the U.S. The pounded spices gave this a great textures, and the short rib was very tender. Unfortunately, it was too small of a serving, but it was good. And so, it is worth it. After all, better than Woo, right? Two tuna tartares which were just okay would cover this cost. 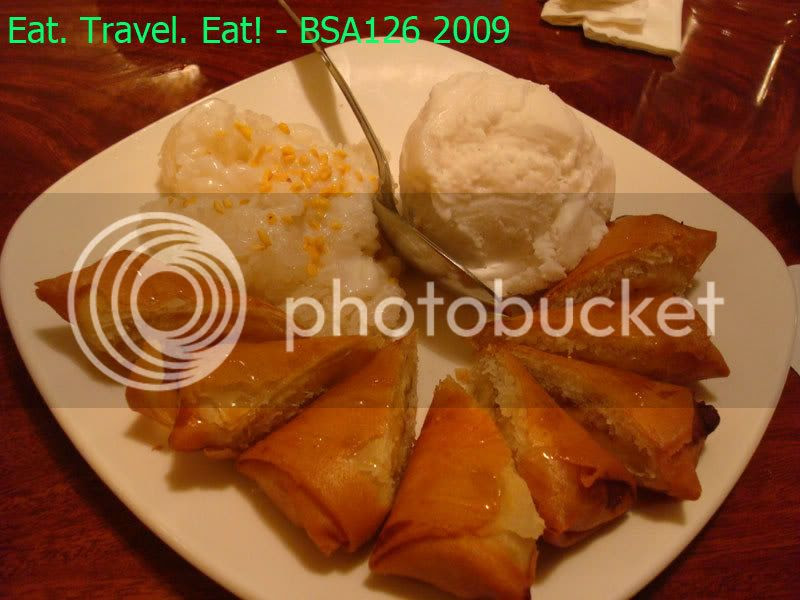 One review on Yelp said you must not miss dessert. Your party had a 90 percent chance of missing it. After all, you had to leave early to go to a show that we had booked. The service was slow; it didn't come fast enough. You said to the server, "If the order hasn't been done yet, cancel it." However, it came. And like what Yelp said, it was GREAT! You must not miss it. To simply say it, it was scrumptious. It was unlike any dessert or similar dessert that you have had before.

Sticky rice had a fragrance to it; the coconut milk did not overpower that scent, but accompanied it. The Coconut Ice Cream had huge chunks of coconut, and was creamy and coconuty, but not too sweet. And the banana rolls? Divine. A crispy exterior meets a warm, flavorful banana, and shredded coconut. You remind yourself; you hate shredded coconut. But this though, was scrumptious. The shredding was fine, and it added great texture. It was not ultra sweet; everything else though, including the addition of honey, gave just enough sweetness; not too much. One bite in, and you would want more. Yum, yum, yum!

As you drive onward to visit the show, the members of your party deliberate about the experience which you have hyped so much about. If it hadn't been for the dessert, our experience would have felt just normal; nothing really that "special". But the dessert, it was just a burst of flavor. Definitely would return for dessert, and to try some more items. You are not done with just one visit.

shavedicesundays said…
I am so going here next time. Those banana rolls sound heavenly, and I really, really want a spicy bowl of soup right now.
January 12, 2009

EatTravelEat said…
Those banana rolls really were great! It is what I remember most about this visit which is now almost 2 weeks ago. The spicy soup would be perfect for any cold weather like it is at night these days. Brr..
January 12, 2009

EatTravelEat said…
Hahaha, I think I would go there again just for that :), as our other items didn't seem much special to us but did taste good. Ah...need more poking around that menu.

Same here with the coconut. I used to not eat anything that had shredded coconut because of the weird dry texture that most places do as well as that gristly texture.

This though was moist, not dry, and was tender. Completely different than usual :), and so I liked it.
January 14, 2009