January 31, 2009
There aren't many places that serve sushi in Arcadia, after you subtract the supermarkets and buffets that offer sushi in Arcadia. And this place is one of the restaurants that has a sushi bar. By no means, it is not as great compared to sushi restaurants in LA (like Sushi Gen), nor as fresh, but for the location, this is a good place for your value too.

And not only that, it is also a business lunch hangout. In fact, the entire plaza which Maki and Sushi is in, which also has BJ's and Sesame Grill, is filled with cars during the lunch period. The entire parking lot is mainly filled to the brim on weekdays. You'd expect weekends to be even busier, but no, that isn't true. Lots of the businesses also in the plaza are closed during the weekend, which then means more parking spaces. But sometimes, it is like the weekday: filled to the brim. 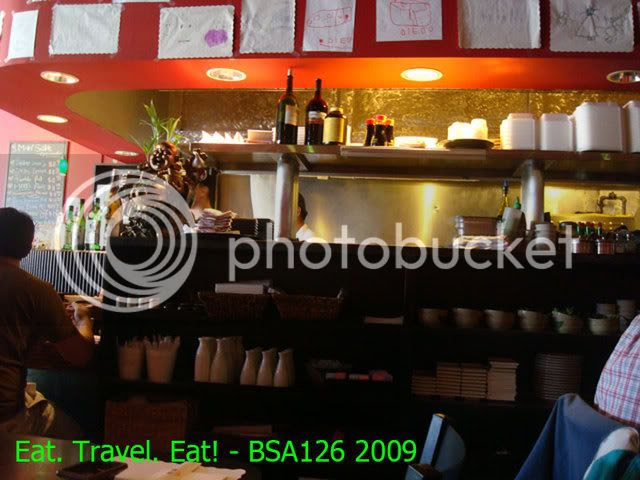 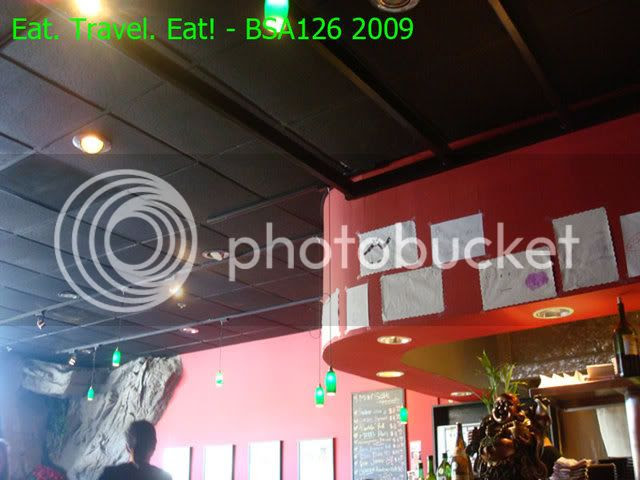 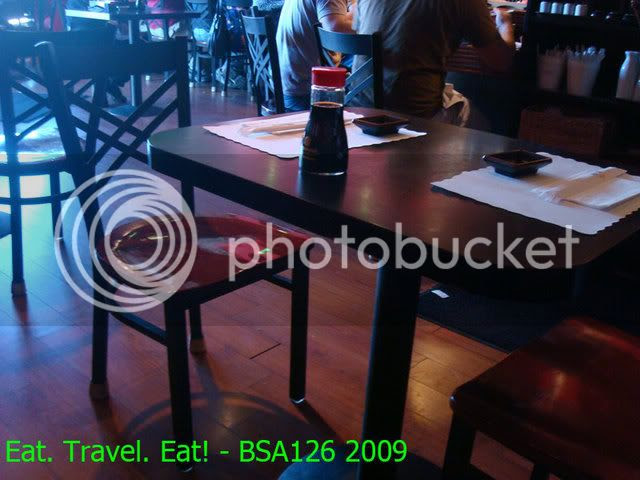 The interior is pretty dark. I didn't get that great of a shot of everything though, as obviously, the restaurant was pretty full and even if you take the picture outside, the people inside can see you very clearly. Anyways, as you can see from the pics, there is lots of dark wood as well as blacks, whites, and reds.

Overall, the space is kind of narrow. The tables are pretty close to each other, and they seat two people (put them together and it becomes a bigger table!). In addition, there is also a small TV (a big TV would not fit the space at all) near the bar (the curved area in the first interior photo), which usually is tuned to a sports channel.

Specials are also posted on the sides of the walls as well, which obviously change from time to time. Usually though, you'll see fresh oysters, which are indeed fresh. On the oysters they add some green onion and masago which is nice.

After selecting your choices, you will automatically get a bowl of miso soup. It's nothing special, just miso soup with some seaweed and tofu. You will also get edamame, which basically is basically young soybeans in the pod; and they are also salted as well. However, we didn't get any this visit, but maybe it is because it also appeared in what we ordered: a "lunch box".

Or you could call it a bento box if you wanted to. You can pick one item (6.95), or two(9.95). They kind of trick you by putting two lists of choices, which can trick people who are ordering two items to order one item from each column. However, you can actually pick anything. Some people will do this: ordering two hot dishes (ex. Chicken Teriyaki and Beef Ribs), which for some people may be a good deal as the serving sizes do not diminish anyhow. But for us, since we also like sushi together with the meal, we picked a sushi item as well as a hot item.

All of these lunch boxes come with a lightly cooked oyster which hasn't been cooked way too long, edamame, a mound of rice, a orange wedge that has also been sliced for easy removal, and a salad with a choice of peanut or ginger dressing. We like the ginger dressing, which is tangy. The oyster has a light smoke taste to it, and the sauce is also a little bit smoky too. 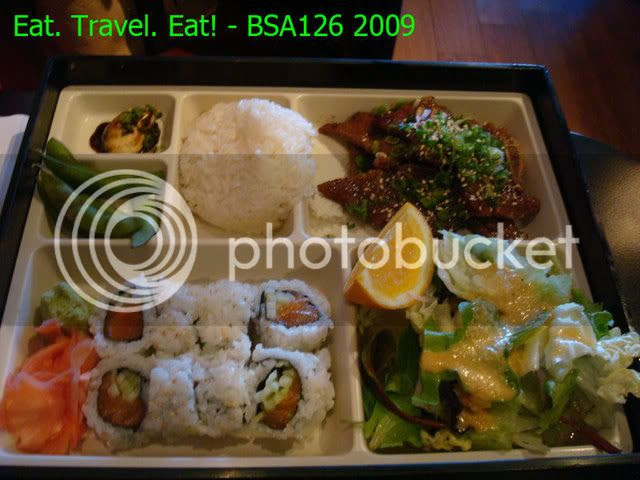 And so here we are with one of the two lunch boxes we ordered. This came with a salmon roll and beef ribs. Portion size is not small; you'll get pretty full. The beef ribs are marinated in soy and have a great flavor. And those salmon rolls are of a good size, and have cucumber in them as well. 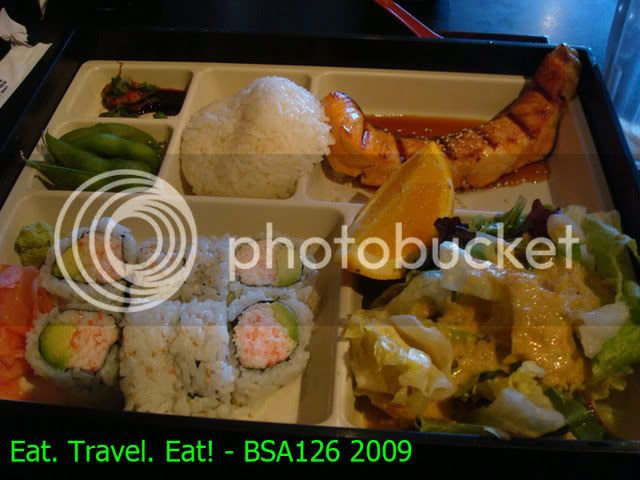 The salmon teriyaki and california rolls are also excellent as well. The California rolls are not real crab but imitation, unlike Tokyo Table which uses real crabmeat. However, it is still good, and you can taste every item put in. The advocado is also very buttery and not ultra ripe or hard, which doesn't happen all the time in sushi places.

And oh...the salmon teriyaki! Teriyaki sauce isn't the ultra sweet type but is slightly sweet, and the salmon is cooked very nicely. It's not fully cooked, and the inside is still very moist, buttery, and tender. The outside though has a crispy skin (yum!) and the fatty part tastes well, fatty with the fish oils...

Besides these lunch boxes though, we also like the vegetable udon and sushi combo, which is yet again another great deal. The udon broth isn't ultra salty, and there are lots of vegetables inside. You pick which sushi you want, and the serving size for those are just as big as the lunch box servings, and they are even plated very nicely too.

Maki and Sushi is our auto choice when eating sushi in Arcadia; it's a good deal, and the food is fresh and yummy. The servers are efficient and friendly, which just makes the experience better.