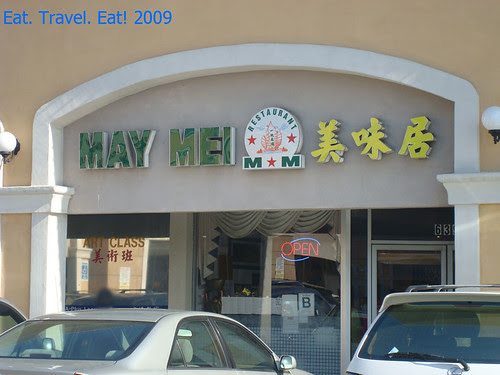 Exterior
It's been a favorite for us for years. All the items are good; randomly pick and you'll find each dish to be pretty good for the least part. I've never encountered anything bad even after coming here more than 5 years. It is truely a great restaurant! It's located in the center where Bin Bin Konjac, Arcadia Supermarket, Genki Living, Sinbala, Chang's Garden, and a future Yogurtland is. In other words to make it easy to find for people who aren't in the SGV, it's on the same block as Din Tai Fung. Remember Life Plaza that is next to Din Tai Fung? If you go back of it, that is where this center is. 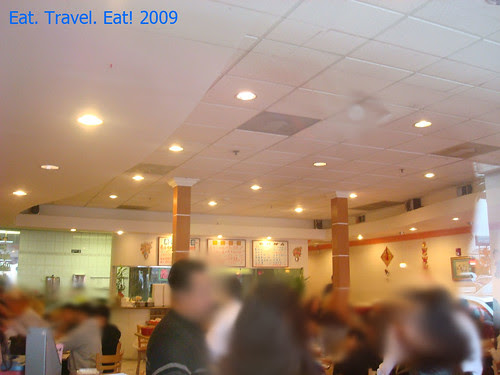 Interior (taken outside the restaurant...)
As you can see, it's a very simple restaurant that isn't high end. You can see through the kitchen, but you really can't see all the food prep and cooking that is done though. Simple wooden chairs are all over, and booster tables are to the right. But nothing really expensive. It doesn't try to be the new, modern style HK cafe like Tasty Garden or Garden Cafe which are only about 1-2 blocks away.

This report will be a combo of our most recent visit at lunchtime as well as another visit at night. I think you'll see the difference between each visit due to a different color for my watermark text. 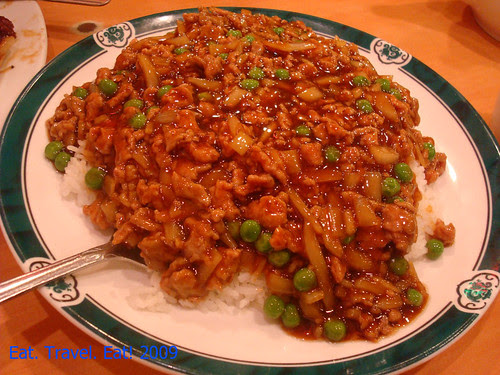 This is one of our family member's favorite plate rice dish! We haven't found a place that serves a minced meat rice as good as this. It's simple. No egg mixed into the rice like Tasty Garden and Garden Cafe do. It's just regular steamed rice with a very beefy and flavorful sauce, as well as pieces of onion that are just about to get soft and peas that are sweet. Put it all together and it is a simple, but very flavorful dish. 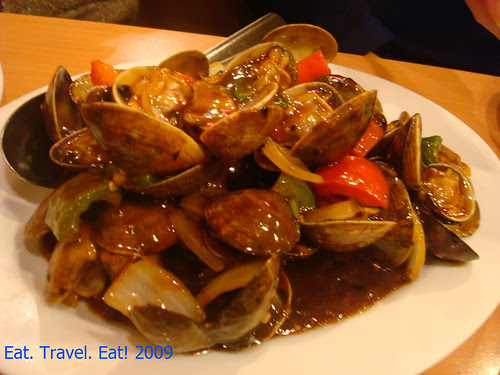 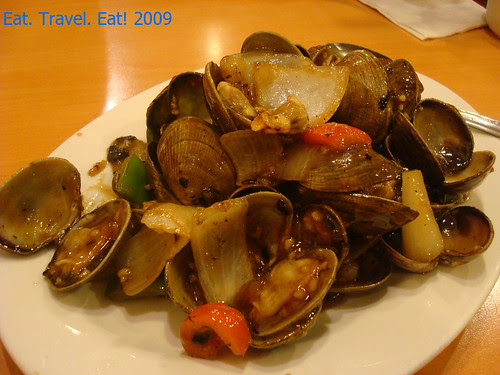 May Mei is one of the two places we will go in the area to eat clams. The only other area is Sesame Grill. These two places have very fresh clams. But for the juicier, even better one, May Mei is the one! You can taste the slight saltiness from the sea and the clam flavor- there is no off putting fishy taste. The black bean sauce is pungent, but doesn't ruin the flavor of the clam. Onions and bell peppers cut the richness of everything, and eat it in sequence and it is a great experience. If you have a rice dish, I strongly recommend putting some plain rice with the leftover sauce. It is just great! 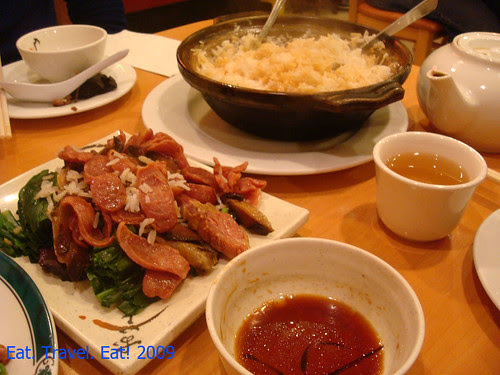 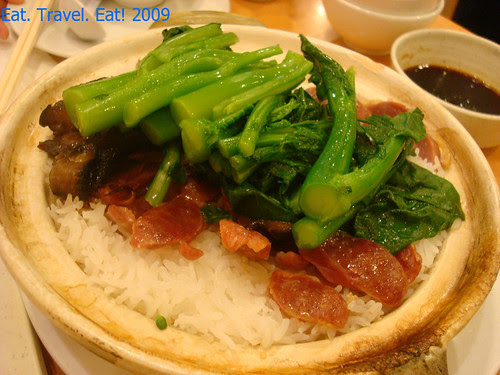 This is another great item, and it is great to eat in the winter and any cold days. The rice comes out screaming hot and is scented with the meats on top. Unlike other places, May Mei doesn't use the electric cooker, but uses fire. Fire in return gives a great rice crust when cooked slightly longer and also gives the rice some great flavor as well. This time though there wasn't much crisp rice as they took it out early, and the server who did it for us didn't put in a lot of soy sauce (which is easily burned...). Pot rice cooking also gives the rice a different feeling in the mouth than in steamed rice.

Fun fact- This visit's pot was actually made in Japan (the bottom photo of the 2 on top). It's not everyday you see that! Most of the ones available nearby are made in China, including the ones in the nearby supermarket, 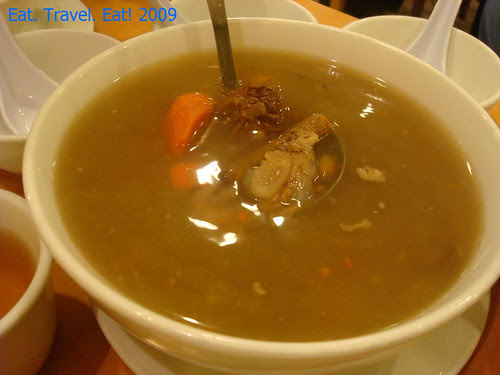 This comes complimentary when you come at lunch. If you are coming with less than four people you'll get a small bowl the size of a rice bowl, but if you are a party of four of more you are most likely to get something like the photo above which is a big as a regular sized wonton noodle bowl. Today's soup was slightly sweet with the addition of something I have eaten before but do not know the name of it (!), and there were many peanuts and carrots, as well as lots of beefy flavor. 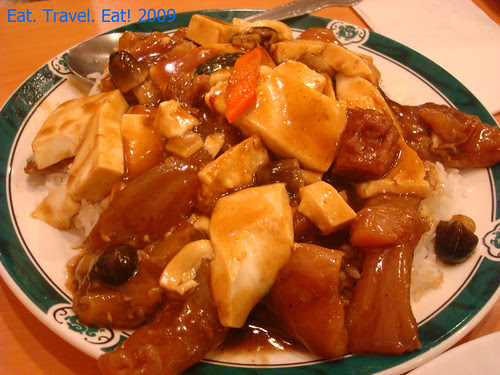 *note- we substituted the beef brisket for tendons instead* Anyways, the tendon was pulled out from what you have put into things like beef brisket noodle soup, and some of that broth was taken out, and some starch was added to create a sauce. The sauce was not enough for our tastes- we would have liked a little bit more. However, everything else was okay. The tofu was pretty firm and there was not much done to it. Tendons were very tender and rich due to the long cooking process, which is a good thing! Mushrooms were nothing special though (probably from a can), and there was very little carrot. 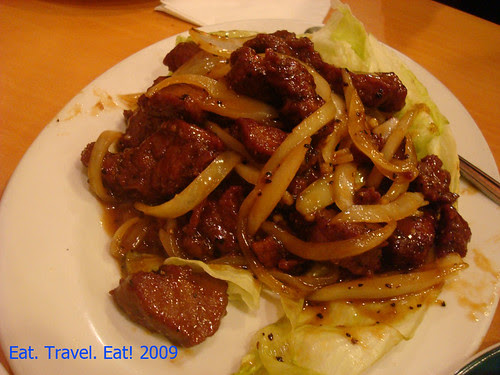 May Mei serves up a great rendition of this. Do not mind this "French style" term; many restaurants use it and I am very sure it's not "French Style". It's probably just used to give some expensive feel to it. Anyway, the meat is very tender; the server said they do come vaccum packed for them and they don't add things like baking soda to it which shows quality! Onions are sweet and the sauce has some honey flavor as well as some black pepper. It is an excellent combo and again, good with rice! 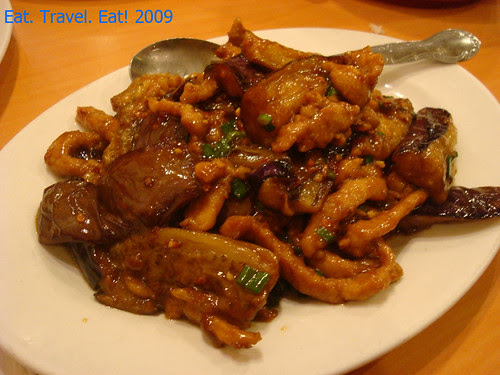 Somehow this wasn't hot enough (at least when you take your first bite of it). You couldn't taste the hotness right away- it was in the red pepper flakes they put in! It took some time and then the heat came in. The eggplant wasn't too oily but was slightly fried, and there were many meat strips which doesn't happen very often. Good with rice again, but I would have liked just a bit more flavor. Otherwise it was great!
We'll be back like usual, although we usually order take out from this place and not eat in during the weekdays.