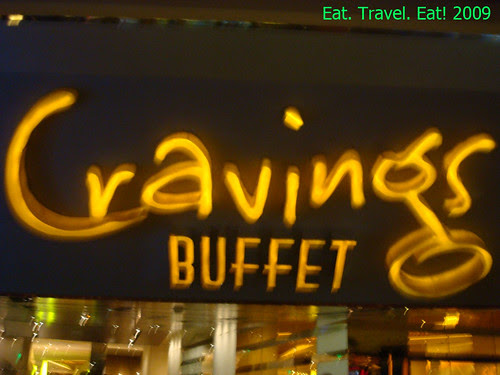 What should we eat after driving 4 hours to get there (and it was nighttime when we arrived)? Why drive more to eat somewhere else when there are many restaurants in your hotel? And so, the decision was made. Mirage Cravings Buffet would be our first meal in Vegas for this trip. What else? We'll use up a total of 100 dollars worth in credit (2 50 dollars) for this meal due to your room rate (79+89=168 168-50=118 per room for 2 nights! What a deal!) that we snatched online. Basically means, we are paying only for tax tonight for this dinner after this 100 dollars goes down. That's a pretty good deal in the book!

On this coupon situation. We were able to use BOTH coupons and still eat together. We just split up into 2 groups, and then used one room's credit per group so that we could use both. They accepted unlike Woo, and we still were sitting in the same table! Way friendlier in the restrictions compared to Woo.

There are many features in the interior of this place. However, I took less of food shots as most of the places I already captured in the videos (which I was a little bit too fast in moving around...again!). Anyway, some interior shots of everything as well as explanations. 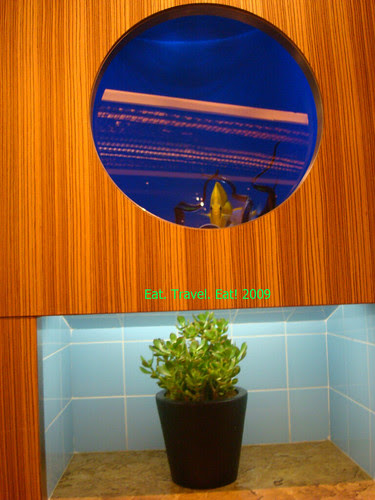 Taken in the raw bar section. Yellow colored fish inside the circle. The fish must be unhappy seeing so many of its friends from the sea right under being taken away and being munched on by us. And he/she must be seeing a vast amount of people everyday! Lucky or unlucky, I do not know. 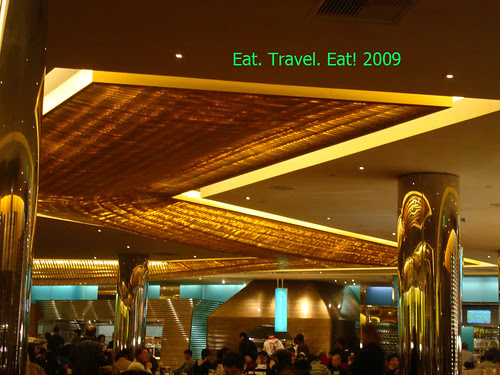 Interior shot with the Noodles, Fishmonger, and bar area. The interior this time was much darker than last time (less lights). Probably it's because people thought Cravings looked too "Cafeteria" like and too bright (orange colored tables, bright colors...). The ceiling is an intriguing part as you can see with that thing that looks like bamboo woven something??? 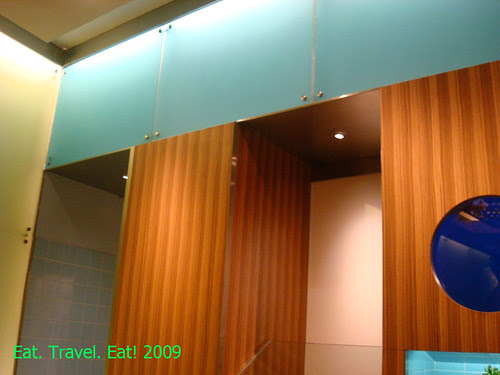 Raw Bar area, at the end. This is a blue theme, and it was so hard to take video and photos here after I ate some food. There were so many people who were trying to eat crab legs! 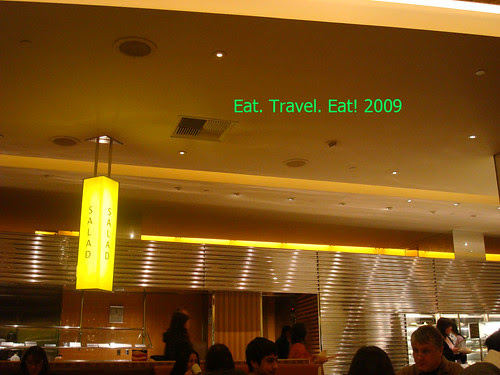 Salad Section. One part of it is a make your own salad- but the worker tosses the salad for you which is nice, and fills up whatever you want for you. 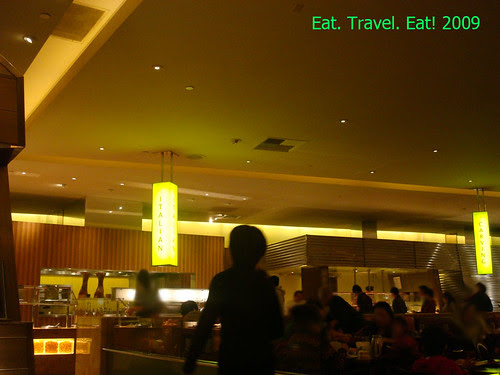 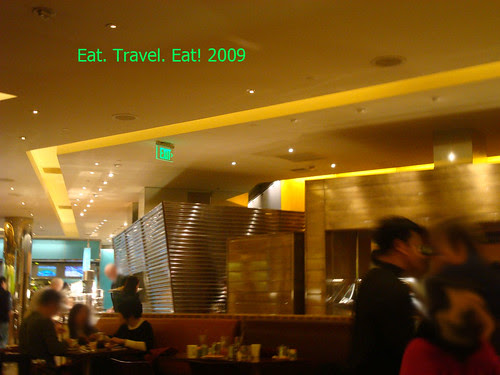 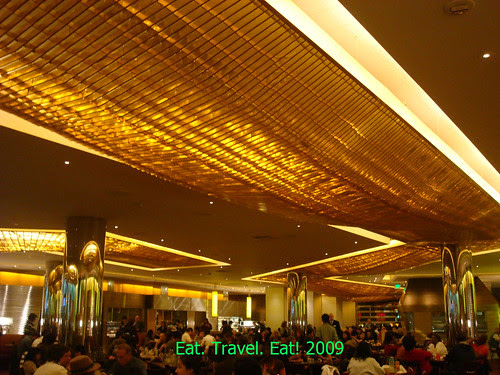 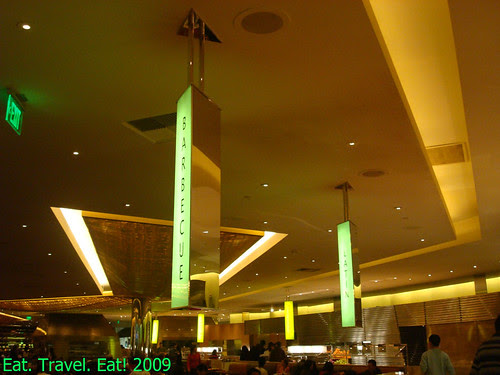 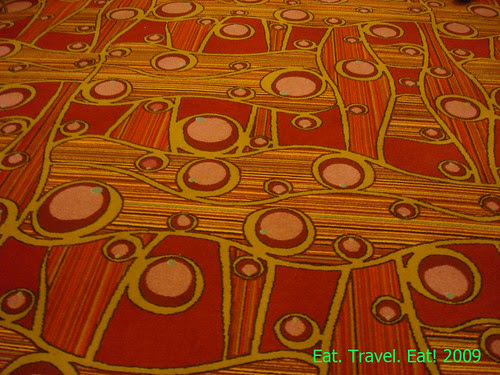 Carpet. Very interesting look, and it's kind of wavy and circle like. Never have seen such a wacky carpet before, especially in an dining establishment! 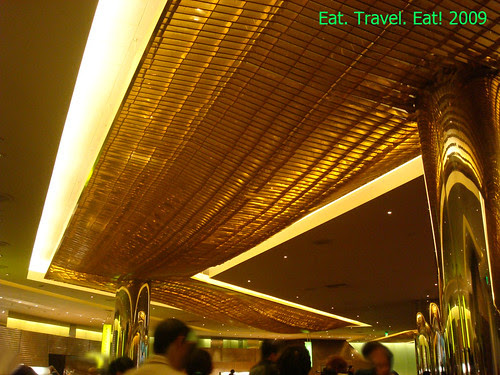 Ceiling. Again... look at the bamboo thing that is going so far! 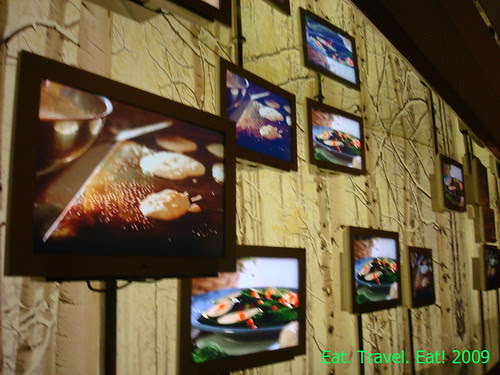 Televisions at the outside waiting area for payment. It's on the left, and there are scenes of baking and cooking which are fast forwarded to make it look really quick- like cooking bread... I guess this will make people more hungry as they wait. But this can also make people get angry if they wait so long and then get really hungry due to these TV's! 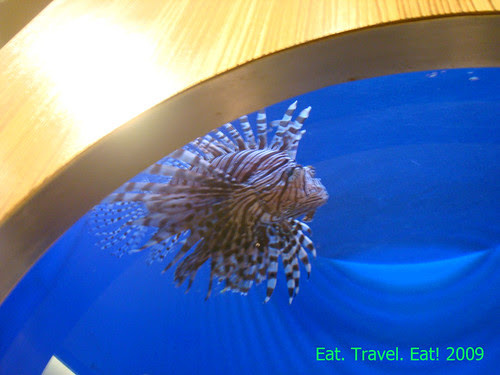 Another fish at the Raw Bar area. I didn't notice that lip looking shape though until I looked at this photo I took! Looks like they made that in the fish tank as a decoration maybe. 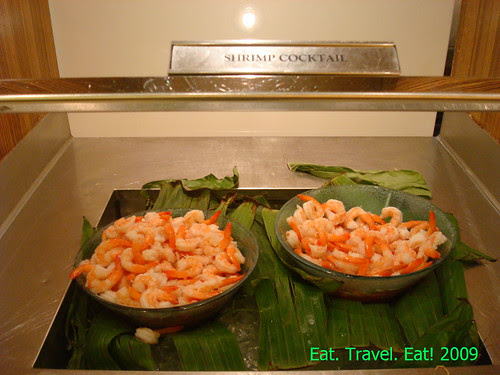 Shrimp Cocktail. But this is basically just peeled shrimp. It was good though! Very fresh, crisp, and flavorful. Better than Sam Woo and Riviera's shrimp, but after all, the cost of this meal is more! (24.95 adult dinner, which is around the middle for buffets in Vegas) 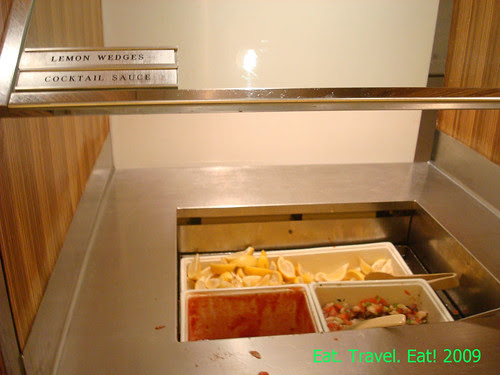 Cocktail Sauce and Lemon Wedges. I did not try the item to the bottom right so I do not know or remember what it is! 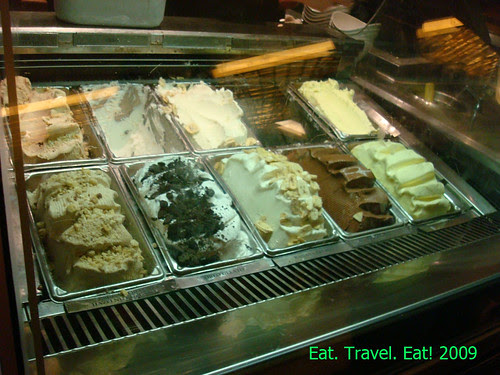 Gelato. Very smooth and actually kept pretty cold too! There were many flavors and they gave you 2 scoops everytime you went (of course you can ask for less or more). I tried the vanilla and it was pretty nice. Cold and firm, but also smooth. I added some chocolate sauce drizzle at another part of the dessert section and some whipped cream also at the dessert section to make a yummy sundae. And it was good!

There were several dishes that were excellent here, and they were:
Clam Chowder- It's so creamy that if you leave it out and don't touch it for several minutes there will be a skin on top of it! Very clammy tasting, fresh potatoes, and not extra salty like some places. This was good.
King Crab- depended on when you got it. Somehow, they didn't let one batch defrost enough, and so one of our family members got a lot of crab, but then noticed that it was still too cold and not ready to eat! If you used a fork to eat it, water would spew out, making it taste weird. And there was ice on the outside. But I went to get crab earlier and it tasted nice. It was fresh, and not yellowy or greenish like some places.
Prime Rib- This was truly excellent! The carver actually for our visit had just came back from New York a day ago (someone was asking him due to his name badge which says where he is from). He likes Las Vegas very much and doesn't miss New York a lot. Anyway...on the food. Even when I got a fully cooked prime rib (no pink color!), the meat was very tender and yummy. Au jus was poured right on top (no direct taste), and it definitely wasn't from a mix (like Riviera's). The outer crust was peppery and had plenty of seasoning; they put a rub on the prime rib. I would have gotten another piece but I wanted to try some other items.
Mango Mousse- This was excellent! It was served in a dark chocolate cup which was nice to munch on, and the mousse was thick and tasted like fresh mango. Good dessert.

Bad items?:
Sushi wasn't that nice. Imitation crab was used (the OLD Mirage Buffet used real crab), and they were skimpy with the items- like the salmon was randomly cut and was small.
Potstickers- do not get this! It wasn't crisp on the edges and was very oily. I would recommend going to a Chinese place to eat this or don't eat it at all.
---

Everything else looked pretty good. They also had gyros and actually had a rotating thing where the gyros meat was on! However, it is a big serving, and I didn't want that much food anymore.

Desserts though is this buffet's weak point. Other than fruit, 2 puddings, gelato, and only a few cakes and other sweets, the choice available is less than many other buffets. But if you really like gelato/ice cream I think you will be satisfied. Overall a good experience here, and it basically was for free due to the 2 50 dollar credits!

EatTravelEat said…
Thanks Wandering Chopsticks! I tried my best with fiddling around and everything. Somehow, my photos in all of the other themes got cut off (even when the size shown is the same as your blog), and so I am using this one.
Certainly enjoying doing the blogging :). I like the photo and text mix that you have when blogging, whereas in Tripadvisor they are pretty much separated.
January 07, 2009

Unknown said…
The unknown item next to the cocktail sauce is ceviche.

And I agree with what you said about the sushi. Not really high-grade ingredients. The noodle lady told me the people who make the sushi are Chinese, not Japanese.
May 25, 2009

Thanks for the answer to the "unknown item"! I wasn't too sure after a while since it looked just like salsa to me- but yes, it definitely looks like ceviche. I'll update it now.
May 25, 2009