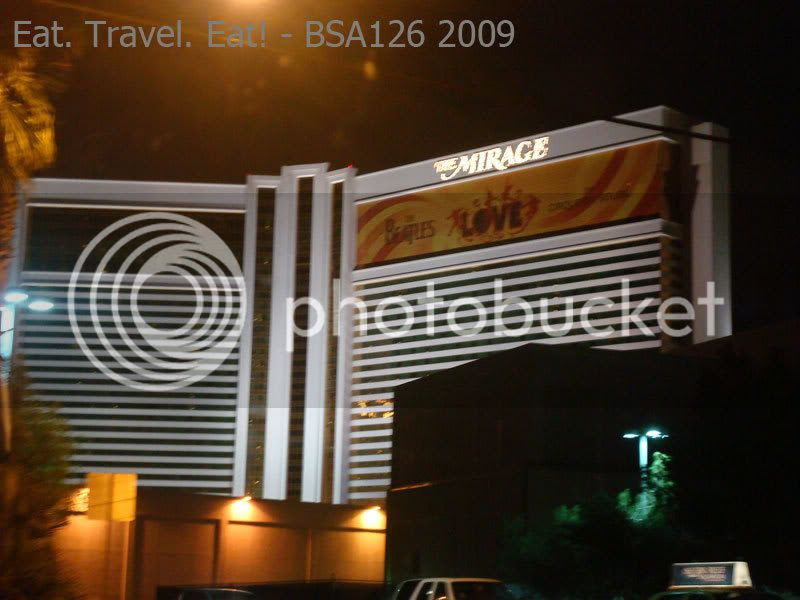 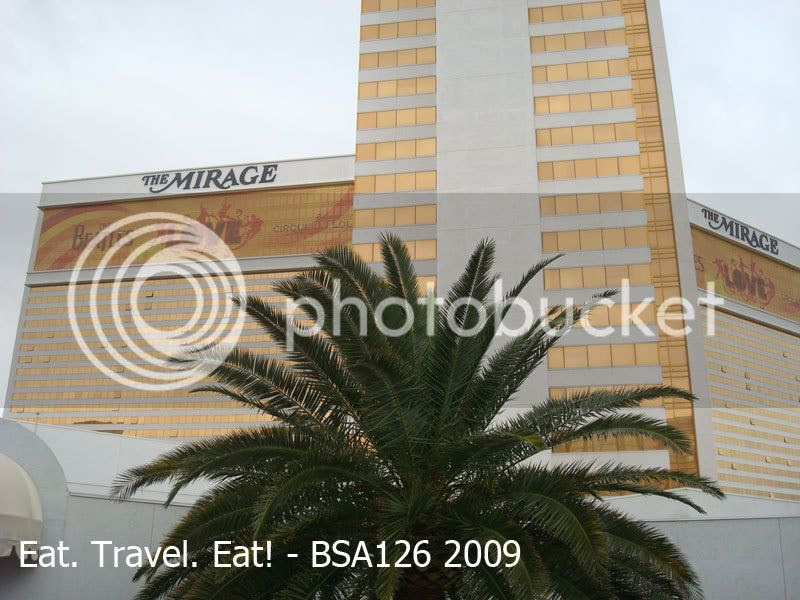 Welcome to the first hotel review on Eat. Travel. Eat! This portion of my review will be looking at the some of the public spaces, the parking structure, and our check in experience. Hope you enjoy it!

And for people questioning the title "Old and new combined", you'll find out in some of the photos I took! They haven't renovated everything to flow into one exact theme, and so there is some old theme, and some really modern new theme. Treasure Island also has this problem too. Is it because both may be sold soon? Treasure Island has been sold already.

Some accompaniments to this review:

Well, they were offering 79 dollars and then 89 dollars per night. Plus, they also had a 50 dollar credit per room, which makes it into: 29+89=118 total plus tax per room for 2 nights. It was a great deal and we snatched it about a week from departure...
However, things were changing. Thinking about what show to see, we thought about Mystere at ti (Treasure Island), and found out they were offering 2 nights free (one room only) when you buy 4 tickets. This fit us, but it was too late to switch. So we went here!
--

-was near 5P.M., and so we tried to check in ASAP so we could get a better room if possible. We parked at the parking structure, and then went in.

For those who do not know the parking structure, you will go up the ramp and then it will go straight up. This ramp will then have entries where you can enter each level. I think the entry to the hotel level is level four but I am not sure. But anyways, there is also an elevator too if you are not parking at that level. At the level for the hotel entrance, you'll pass a bridge (which has great views), and then go down an escalator. The escalator even has ads for the Mirage. What a nice way to enter a hotel...or not so. 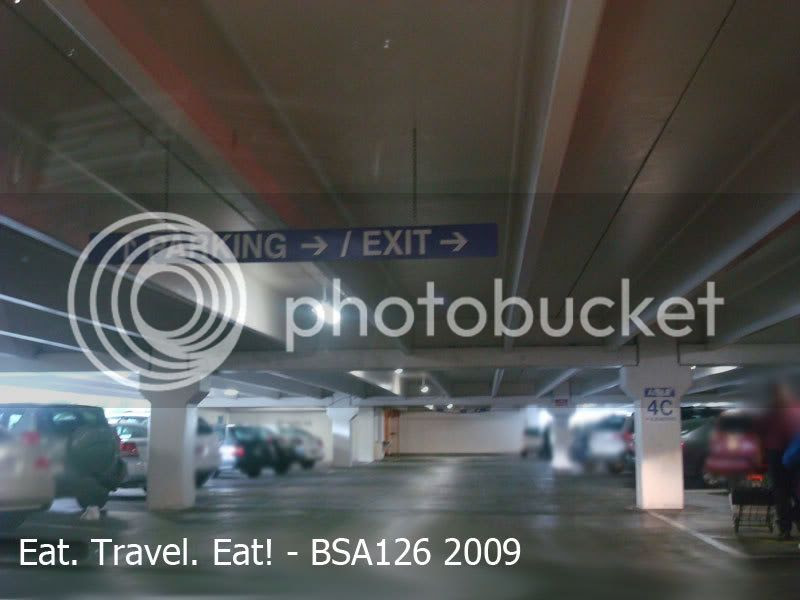 After going down the escalator(did you enjoy the ad ride?), you would go right and move forward, and then the check in area would appear. A CityCenter promo area is also there (no pic on that). The check in area is very large and rectangular, but the real "check in area" is actually very small. Mainly the largeness is due to the aquarium, which is VERY long and very beautiful!

Being winter, there were also numerous winter style decorations all over the place, which added some festivities to the hotel. 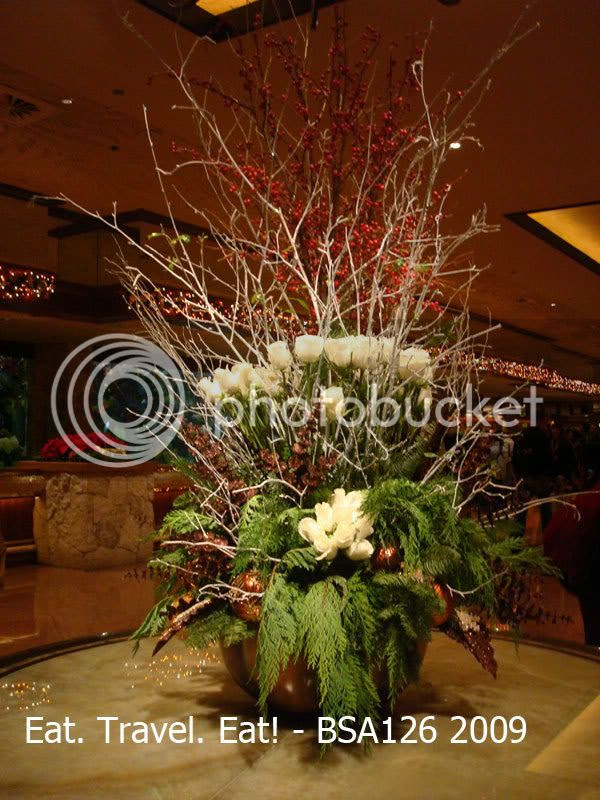 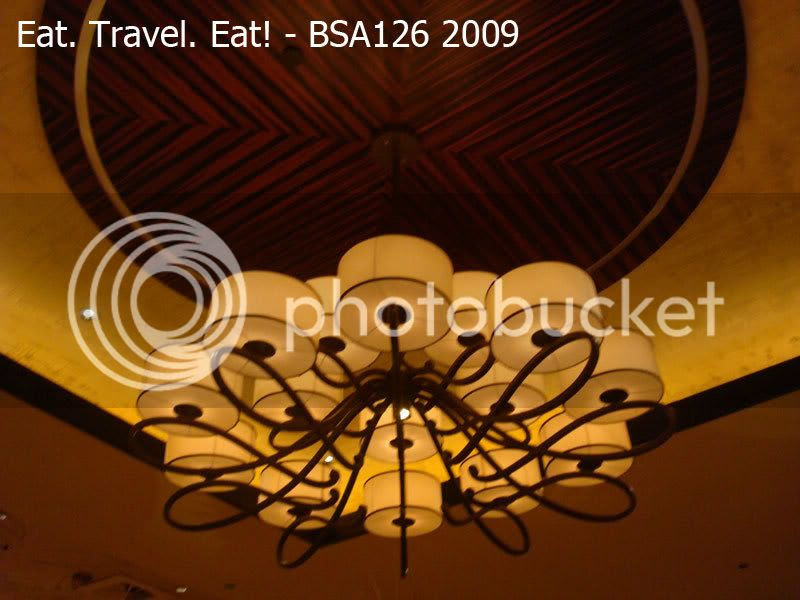 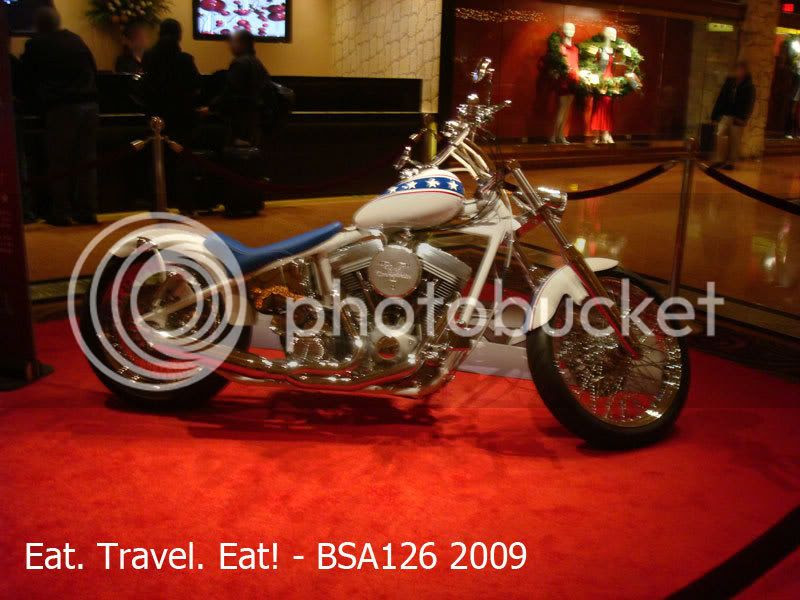 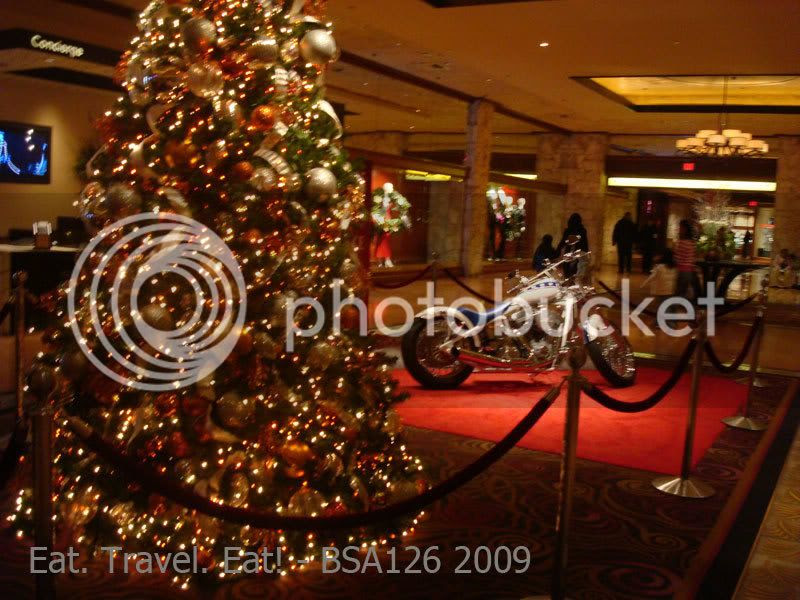 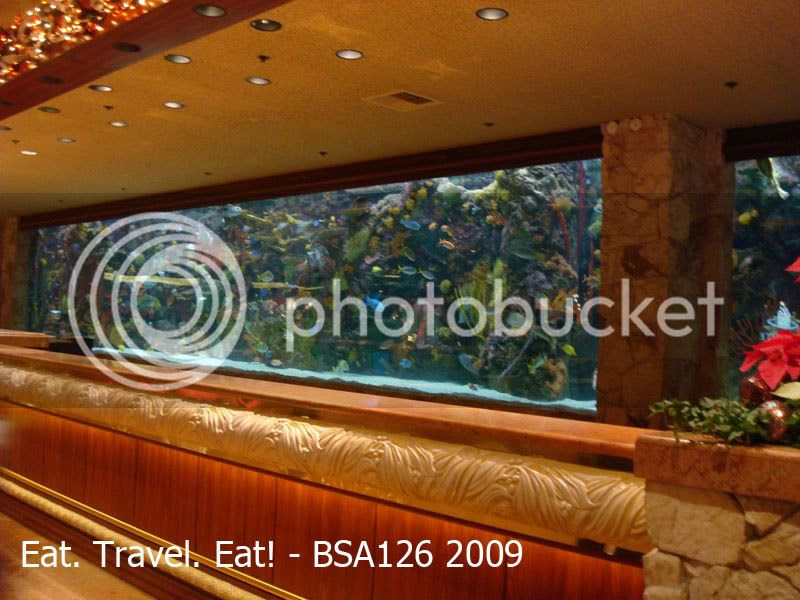 Aquarium tank and what used to be check in (now a area for people to watch fish; check in is MINI and crowded). Many people were looking at this, but I was able to take a photo with no people as no one was leaning against the counter, which is not really "modern". 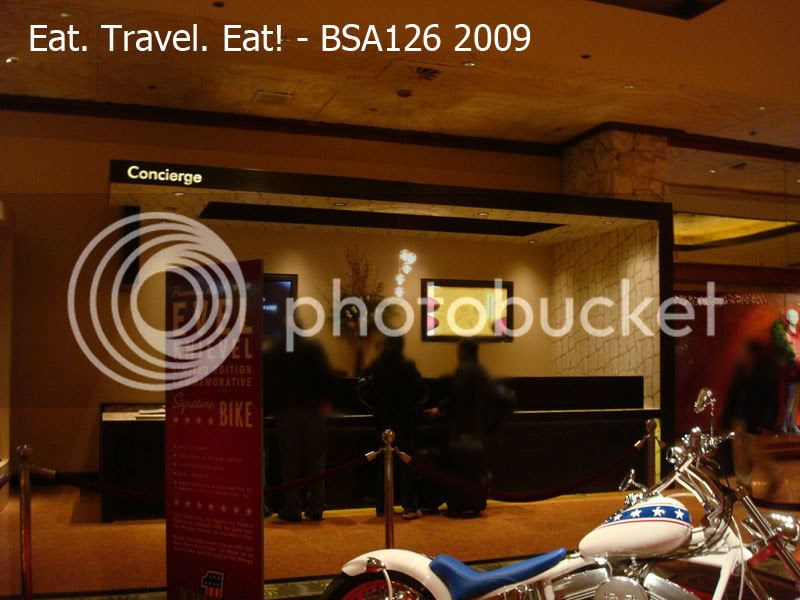 Concierge (Very modern!)
Our check-in experience was great. Accidentally, we had ordered two rooms of the same type, but we wanted a room that had a king and then a room with 2 queens. The check-in agent looked at her screen and examined, and was able to find a connecting room for us. She was even so thoughtful enough that she gave us 2 different types of room keys (one promoting a salon, the other promoting a spa) so that we wouldn't mess up the room keys. But what was more amazing? She actually gave us a room that had a great view of not only the volcano, but the Las Vegas Strip too! I guess it was a low floor and so that is why. But that view...was EXCELLENT, even if we were not up high. 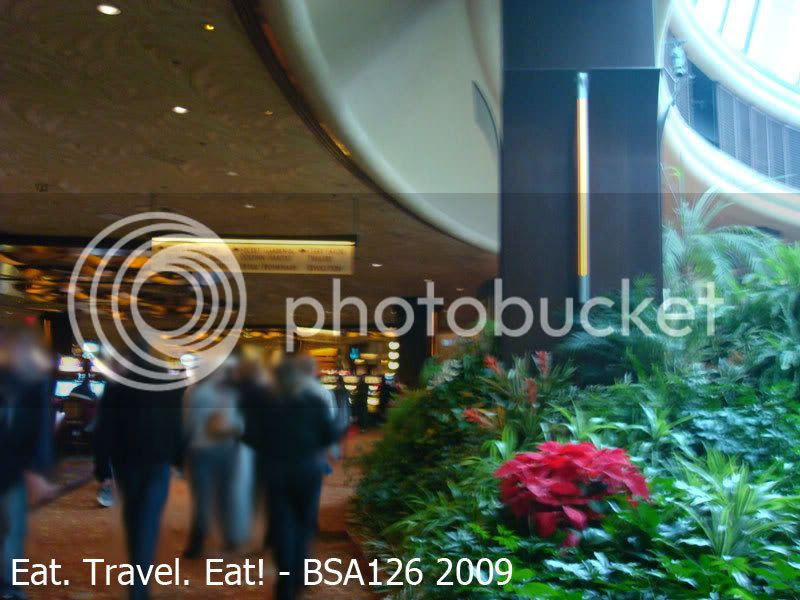 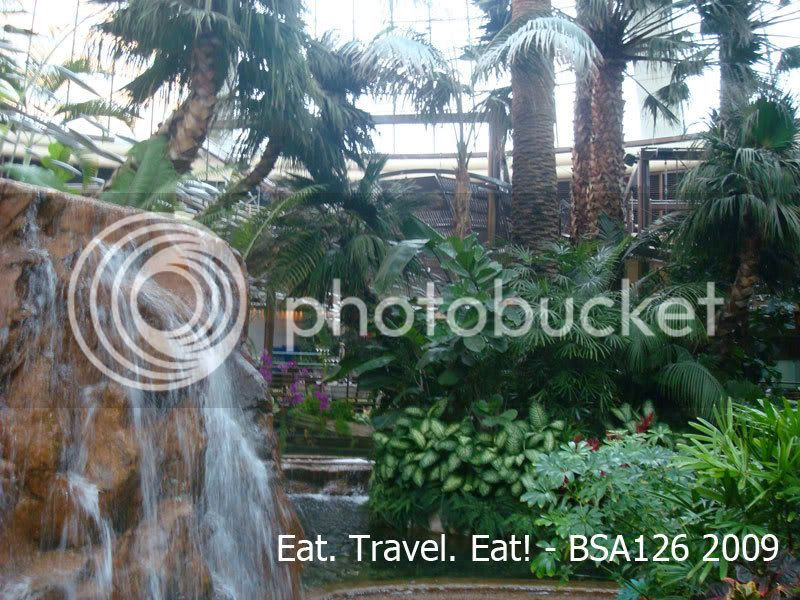 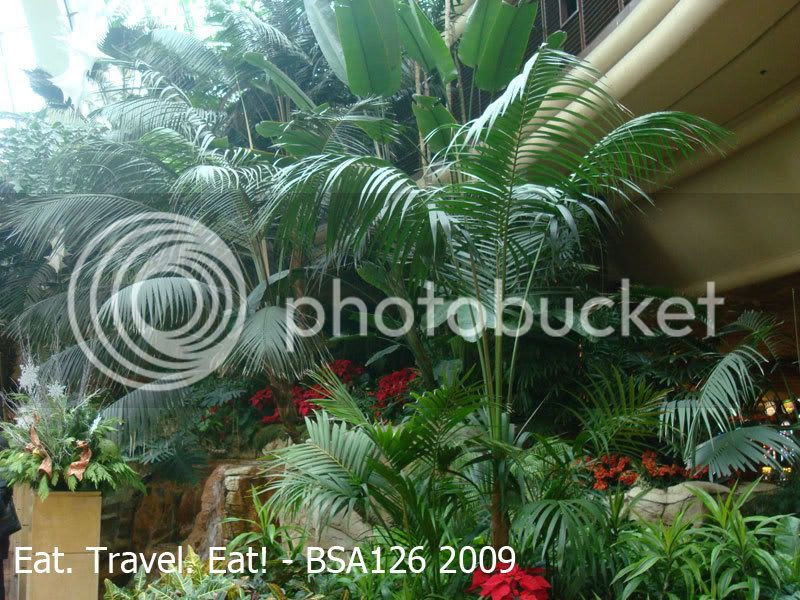 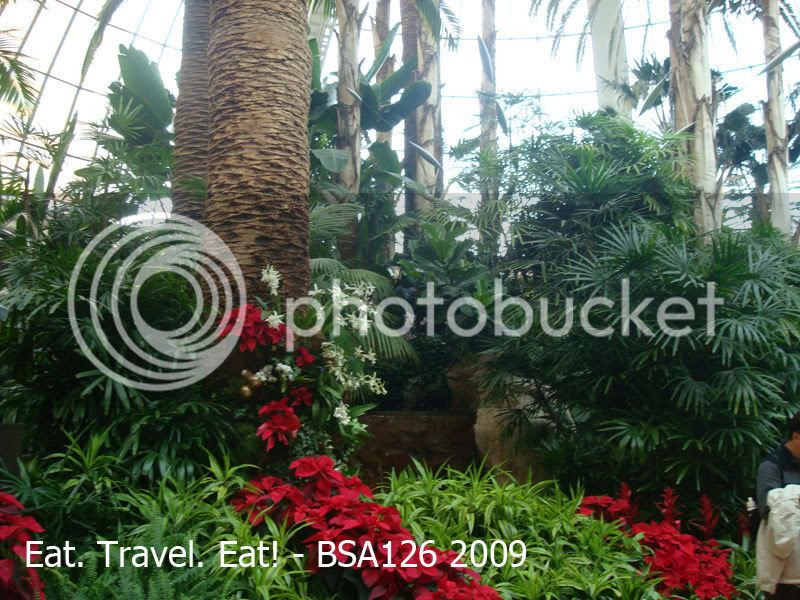 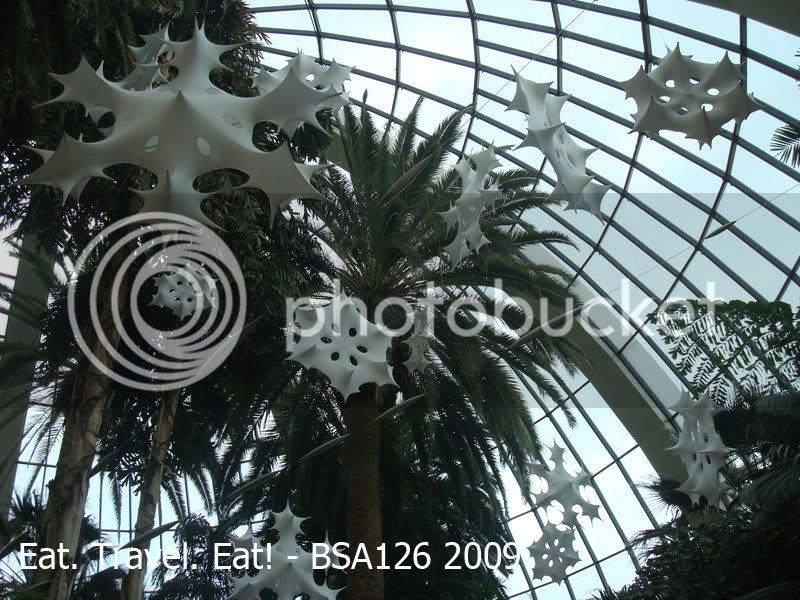 Winter snowflakes! (and the glass dome!) 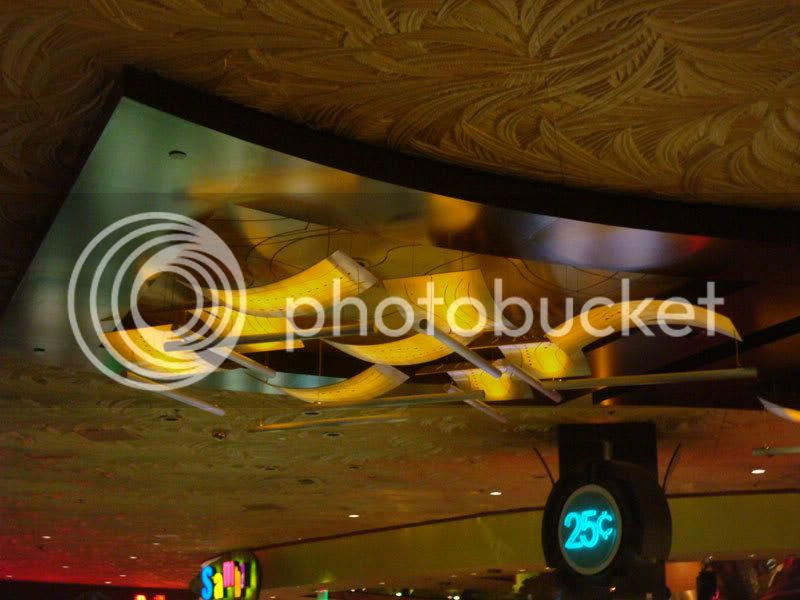 Decoration on the ceilings ( and see the old ceiling?)
As part of their layout, the walkways are very, very wavy. You'll go through the glass dome, and then through the casino, almost reaching Craving Buffet. The elevators are close to the Revolution lounge, which is very interesting. The signage is tall- from floor to ceiling. Some areas are available to sit- such as the U's- in the bottom part they would have created a bench seat to sit on. 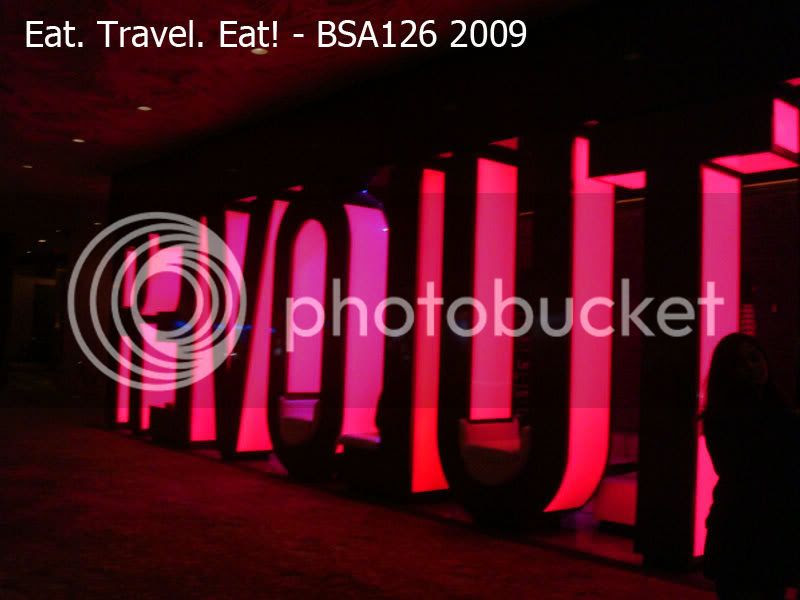 Here is part of the writing/signage. Do you see the seats at the U?
Go further down the walkway, and the hallway splits to a shopping area/theatre and also to the elevators. The elevators are also then connected to a gift shop which has many souvenirs, eats, et cetera. You'll also see how outrageously expensive the items for sale are! The bedding set for one bed (mainly white sheets and then a big colored pillow and throw) costs 100 bucks! 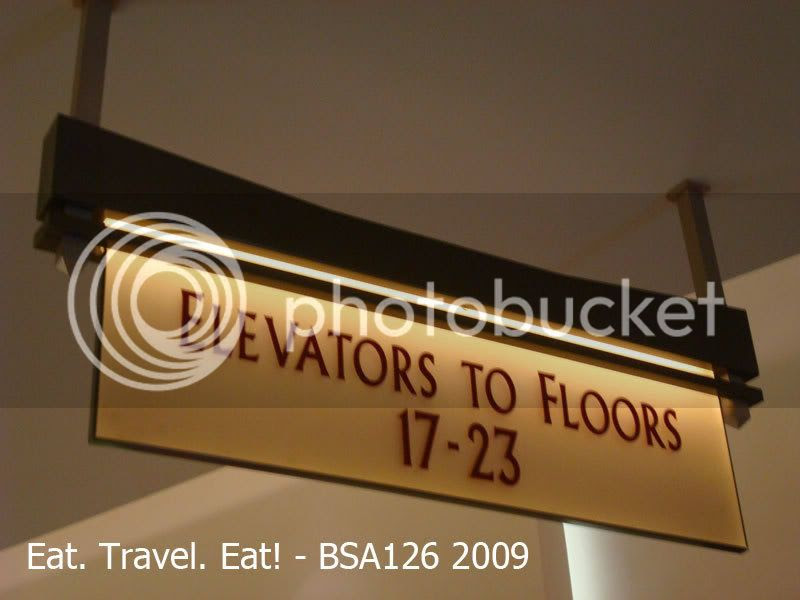 Elevator Signs-there are several of these to direct traffic to which elevator lobby.

At night they will also do key checks. All the hotels I stayed at during this trip did this! The Mirage people though look more friendly as they are not wearing a security uniform (which our other hotel, the Palazzo, did), and they were very "welcoming" and "amicable", compared to Palazzo security which was like- show me this. Ok. Bye!
---