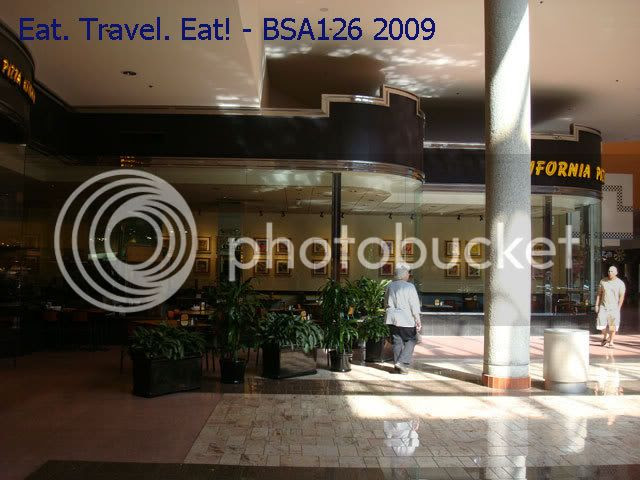 If you have ever been to the Arcadia Westfield Mall in....well, Arcadia, chances are, you probably have seen at least for one the restaurant and also probably someone or several people holding a bag or pizza box with the California Pizza Kitchen logo. It's a busy hotspot in the weekends; if you don't arrive by 7 PM for dinner (or probably earlier), there is a very high chance of waiting for a table. But, the food is so worth the wait. 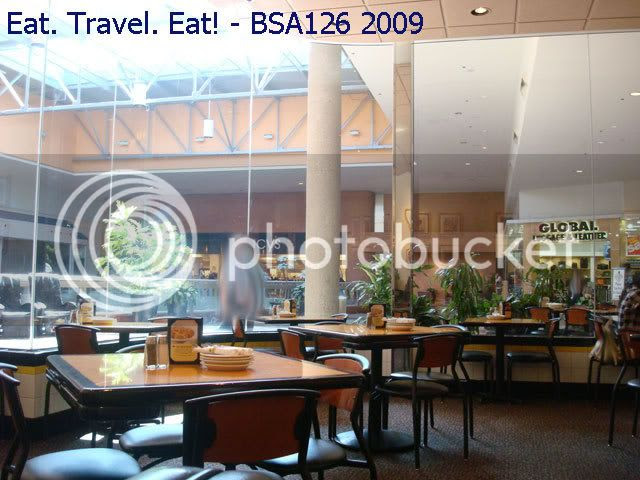 The interior affords a great view of the mall, but that also means the people can see you too. This location has a sit up bar as well for people who might not want a table. In addition, the restaurant space is very vast, and there is open kitchen where employees prepare pizza and other foods for cooking.

If you looked carefully at the top photo, you probably can see some CPK pizza boxes that have been decorated. These boxes are all over the restaurant and each one is different in its own way. It's not every restaurant which has this feature. Always a great sight to see as each boxes was meticulously decorated and each one well looks great. You can definitely see the effort made to each pizza box.

We went here several times, and so yes, we have some different photos. Photos that have 2 items are from different visits; the left is the newest, while the right photo is older. You can see a slight difference in each visit!

Our server for this time was Jacqueline which was a great server. Very enthusiastic and also treated us very well. It was a great visit and she gave us lots of extra stuff like honey and lemon (which we rarely get at CPK; it's been like almost 3 or more years since we have gotten a honey packet (which they used to give out) for hot water). Constant refills were made, and she even decorated some things, such as putting 4 lemons on the side of a water pot. It's not everyday that we get such a great server; for one of our visits, we got a lady which was very unenthusiastic about her job and treated us really bad.

There was a slight downfall though and that was she accidentally charged us an extra beverage which we didn't order. After we notified her though she put it off and was very clear when showing the new check from the old check. 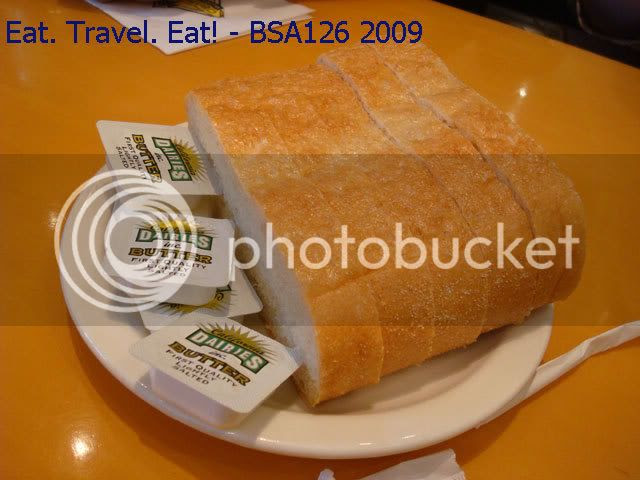 With every visit comes a plate of bread and butter. Or not. Last year they tried to skimp by not giving bread at all, but if you asked you got it for free. This time, we got it without any asking, but the bread!!! What happened? It was different from the usual bread. Crumbly and dry, with no good chew like the old bread used to be which had lots of air bubbles. This was dense and dry. 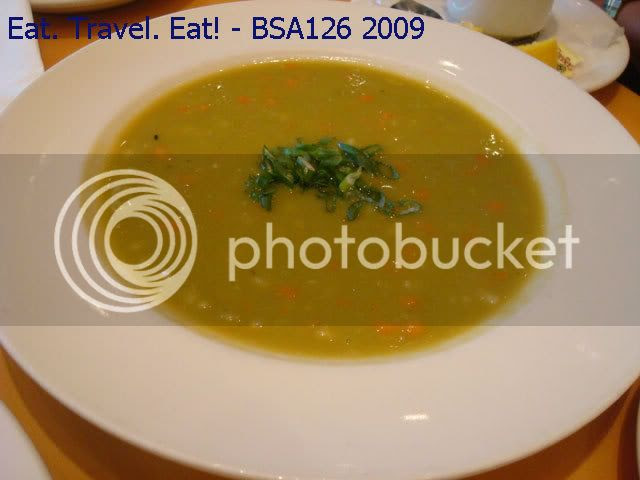 One of our favorite appetizers are the soups. This one in particular is the Dakota Smashed Pea and Barley soup, which tastes great. It has cooked for a long time, and so everything is very tender. Great pea flavor in this and the barley adds a nice slight chew. This must be a pretty hearty and healthy soup! 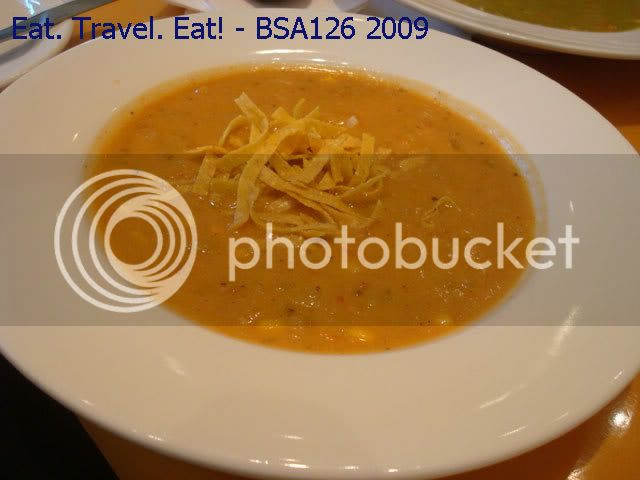 Another favorite soup is the Sedona Tortilla Soup which has tomatoes, corn, tomatillos, green chilies, and spices. This one has a much bolder flavor compared to the pea soup, and the tomato and chili flavor comes out really well. The corn adds a good amount of sweetness and the torillas add a nice crunch.

We really like the pizza here, and it is all because of the crust. There is a flavor in the crust that we have never tasted in any other pizza restaurant, and the crust is pillowy, soft, and yummy. It is not a crust that need to be thrown away (which some people do) or need to be dipped in some sauce. And that is good!

One great pizza at California Pizza Kitchen is the Wild Mushroom Pizza. It has a wide variety of mushrooms, including the cremini, shiitake, portobello and white mushrooms, as well as Fontina and Mozzarella cheeses. There is also a wild mushroom walnut pesto as well as some chopped parsley. With so many mushrooms all over the pizza, it is definite that this pizza has a lot of mushroom flavors. And very intense mushroom flavor indeed. 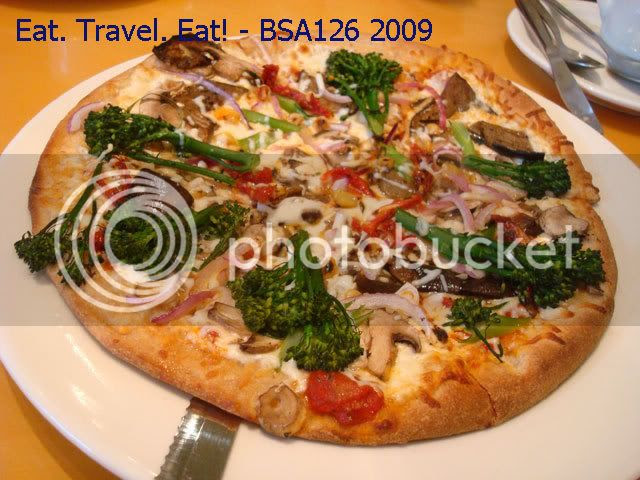 We ordered this for the first time ever, and it tasted great! It is the vegeterian pizza with Japanese eggplant. When it arrived, I truly was amazed by the look; it was just so colorful! The pizza that I got looks WAY better than the one online at CPK's website.

There was mozzarella cheese, baby broccoli, grilled Japanese eggplant, roasted corn, sliced red onions, mushrooms, sun-dried tomatoes and tomato sauce in this pizza, which is a lot of ingredients! However, each vegetable really stood out and was very flavorful, but somehow it tasted really good together! The eggplant, corn, and the sundried tomatoes were the three flavors that particularly stood out. Somehow they managed to get the eggplant still to have a good firm chew and still be really flavorful.

We ordered this pizza with the honey wheat crust and it added another dimension of flavor to the pizza. The texture was virtually the same as the regular crust, but the flavor was sweet and you could taste a little bit of the wheat. Nice touch to a pizza. 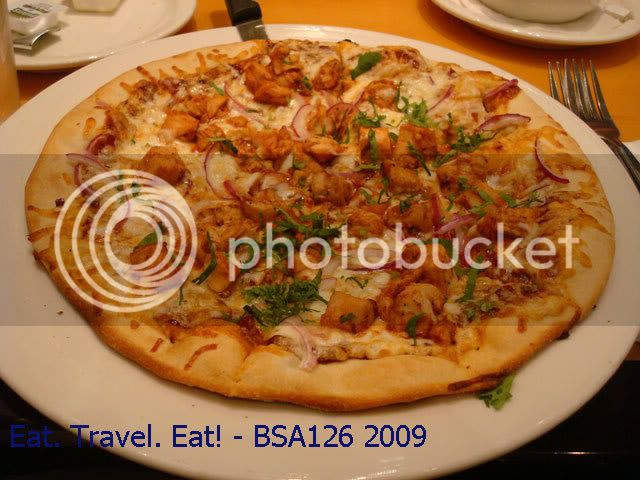 Although there are a ton of pizzas available on offer, this pizza is what made CPK go on the map. It is the Barbeque Chicken Pizza. According to their website and menu, this is their most popular pizza. The BBQ sauce is not ultra sweet, and the chicken is very moist. Red onion adds a good crisp and sweetness, and the basil makes this more "fresh". There may be different barbeque chicken pizzas around town, but this one tastes really, really good.

Now, this is one of the "Neapolitan" pizzas, which have a very thin and very flavorful crust (due to the browning all over). This pizza is the margherita pizza which is fairly simple with tomatoes, mozzarella cheese, and some basil. The tomato flavor is very intense and the basil adds some freshness. Together with the crisp, flavorful browned crust and the cheese, it tastes awesome!

The Sicilan pizza is also good, and that one has a lot of sausages and meats.

And for salads, we get the Barbeque Chicken pizza, which tastes excellent! I would have never imagined putting barbeque sauce in a salad, but with all the ingredients it actually works.

There is chopped lettuce, black beans, sweet corn, jicama, cilantro, basil, crispy corn tortilla strips and Monterey Jack cheese in this salad which is then tossed in a herb ranch dressing. Then, the salad is topped with chopped BBQ chicken breast, diced tomatoes, green onions, crispy corn tortilla strips, and a swiggle of barbeque sauce. So many flavors, but no ingredient is overpowered by another ingredient.

Their kids menu is also really good. If you have a kid, make sure to order the sundae for dessert which is a really great deal at 99 cents. The chocolate fudge sauce is so thick and yummy!

Overall, one of the good restaurants in the Westfield Mall, and there aren't really many. Four restaurants in the new expanded area of the mall have already been closed, and only two have been reoccupied. But CPK has been in Arcadia for a very long time now, and it hasn't closed its doors at all.

I also have a review on Tripadvisor on this place, which has more information on the kids menu as well as some other menu items we have tried before in the past.

The interior looks similiar with the California pizza here in one of our mall called EX.
February 03, 2009

I love pizza too! The CPKs seem to follow a design language. Many of the CPKs around California have yellows, whites, blacks, and light wood tones, and some restaurants have their own special designs such as a really big ceiling.
February 03, 2009

shavedicesundays said…
I like their spinach artichoke dip and their shrimp pizza. Delicious.
February 06, 2009

EatTravelEat said…
Shavedicesundays,
I haven't tried their shrimp pizza before. Sounds good! But I agree, the spinach artichoke dip is really good. Cheesy, rich, and flavorful from the vegetables.
February 06, 2009