Something new has happened. What used to be OK Cafe for a pretty long time turned into DJ Cafe with some renovation. After that, there were some other name changes. Then, it became Sikas, for at least a year or so. Now? It is this. Face Cafe. Driving past here for several times over the weeks, one does get interested. As you watch from the street, the moderness of Face Cafe strikes you. It is no longer the old, all beige feeling OK cafe. This well, is something definitely new!

With a problem on which restaurant to eat out, we decided to visit here. Something new should be tried out, right?

As you just enter the restaurant, the new modern interior strikes you. It almost seems like Pinkberry or Yogurtland for a second. Gray colored flooring and green tiles are very similar to Yogurtland right?

Other interesting things? Lots of light colored laminate wood, and lots of high tech stuff. TVs are placed throughout the area, and in the waiting area, there is a slideshow of foods available at Face Cafe. Just makes you even more hungry to eat... 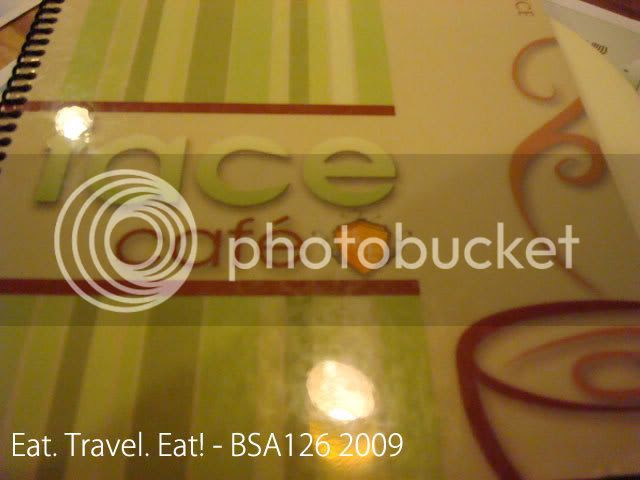 This visit, we get a booster seat table. Menus are then handed out, and the text is very modern. Some of it kind of makes you feel like you are at some special place. Looking at the menu also answers a question. They serve yogurt here (frozen? unknown)!!! Maybe that is where they got their inspiration for the design from. 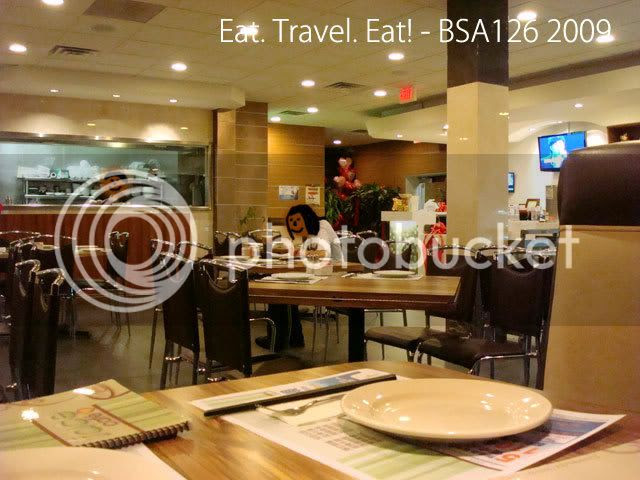 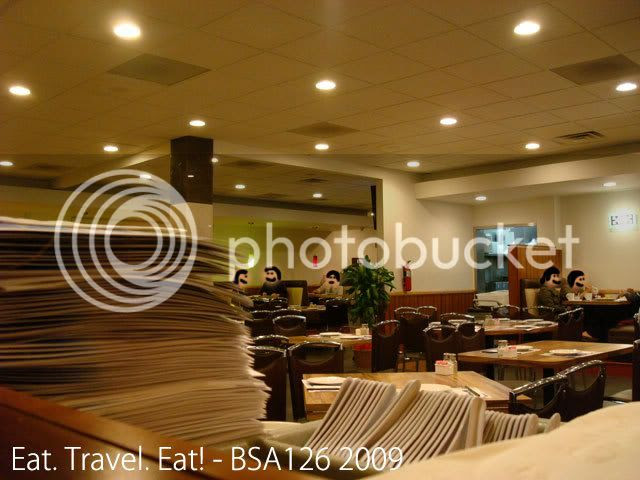 The interior has some funky lights, a la Pinkberry. Or not so. Toned down a little, but still some quirkyness in it. The second big thing you notice other than the very new chairs and design is that the wall near the back is now gone! A very good idea it is. Now, the space feels very open and large, compared to back then when it felt a bit cramped.

Walking around, we also noticed that desserts were also available, such as egg tarts and tiramisu. I also found a huge vat of red bean dessert soup in a plastic tub which was steaming. I wonder why... would we get this for free later on?

After we just sat down, the waiter asked what we would like to drink. Wow, this is some good service. It's almost like visiting a high class restaurant, you think. So, what do you want? We got lemon iced tea, which is a favorite. And this restaurant serves up a great rendition that is not too sweet and very lemony and has a bold tea flavor. The sweetness does not overpower the tea flavor at all. Yum. And, you can tell lemon juice has been added because the iced tea comes a bit cloudy. Good job.

Soon, you order after asking what the specials at Face Cafe are. Mr. Server said the stone pots are one of the specialties. Looking at the menu though, there are so many other choices. It is almost mind boggling. So many varieties of dishes, and also a bit hard to choose as there are so many! 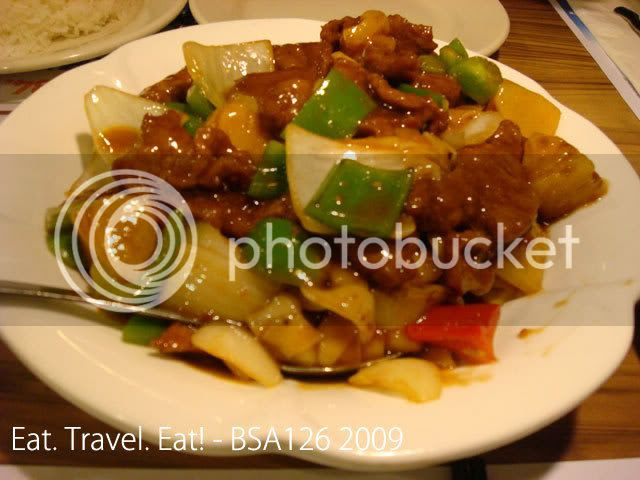 What came first? A thick rice noodle with satay beef. This was a bit oily, but the satay flavors were all there. Rice noodles were fresh and not powdery at all, and the vegetables were crisp and fresh. The meat was pretty tender, but you could tell nothing was added, like baking soda. It was served in a bowl rather than a plate, and all the sauce/oil went to the bottom. We moved the noodles, meat, and veggies away later on, as it was too oily, and we don't like oily.

There was also bits of chunky pineapple to the dish, which I liked. As pineapple should be, it added some sweetness to the dish which was nice. 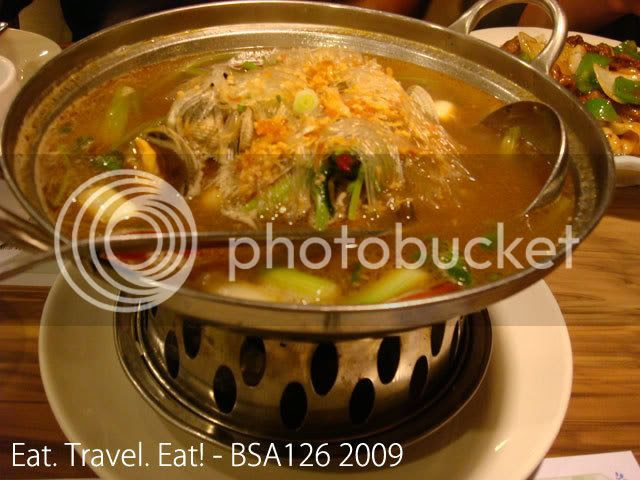 After asking how were the clams like today (they were delivered this morning according to Mr. Server), we ordered this clam/rice noodle/soup pot which was on sterno heat. As you can see by the photo, it was pretty spicy, but in the broth, you could clearly taste the clam flavor. Green onions cut roughly as well as other ingredients added more flavor to the dish. Rice noodles did their job- they soaked up the broth well and eating the rice noodle was almost like drinking the broth. Lastly, the clams were fresh, and had lots of great clam flavor. Mmm. But, again, it was a bit oily. 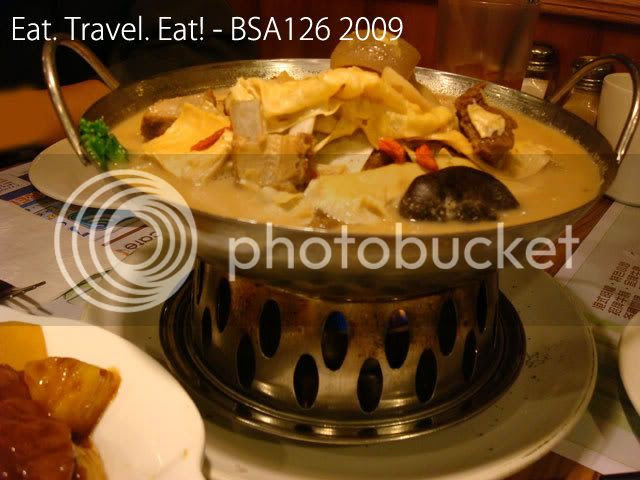 Lamb hot pot with dried bean curd sheets was also pretty good, but I have to say the lamb did have some gamey flavor. Otherwise, it was a good dish. There were also ingredients like water chestnuts which were chrunchy and delicious! It was also a bit spicy. They asked us if we wanted some feremented bean curd paste too, and we obliged. But, in reality, it didn't need it that much. 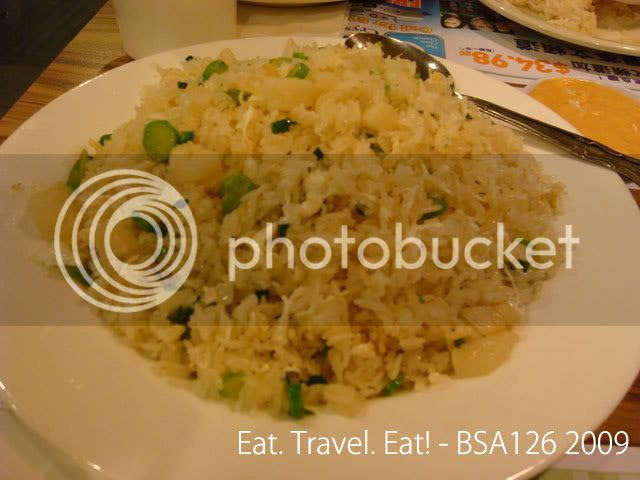 I ordered this dish. Scallops with egg whites fried rice. Boy was this good! There was a lot of fresh scallop pieces (yay, no skimping), and the gai lan wasn't bitter. Egg whites were long and thin, and pieces of shredded dried scallop were added for some great saltiness. The amounts of flavors were perfect, and it wasn't too salty. But, as one friend pointed out, it was a bit, again, oily. I think they could make it less oily if we ordered it again though and told them to use less oil. 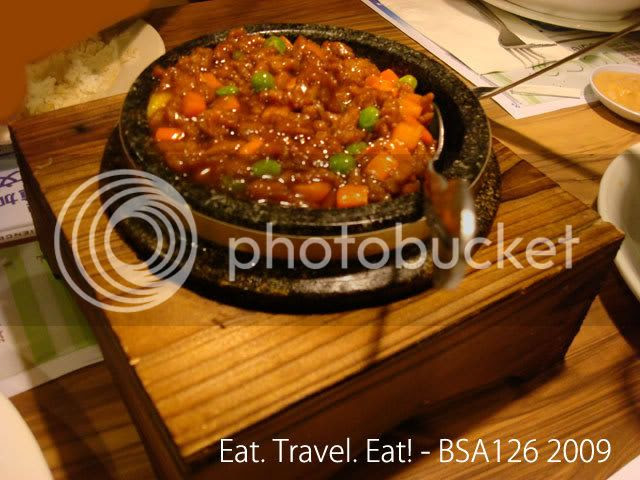 And lastly, the stone pot came! We ordered the minced meat one , and on the top was a good amount of the gravy, meats, and vegetables. They also added a raw egg which was cooking while it arrived at the table, and by the time we stirred everything together it was cooked. 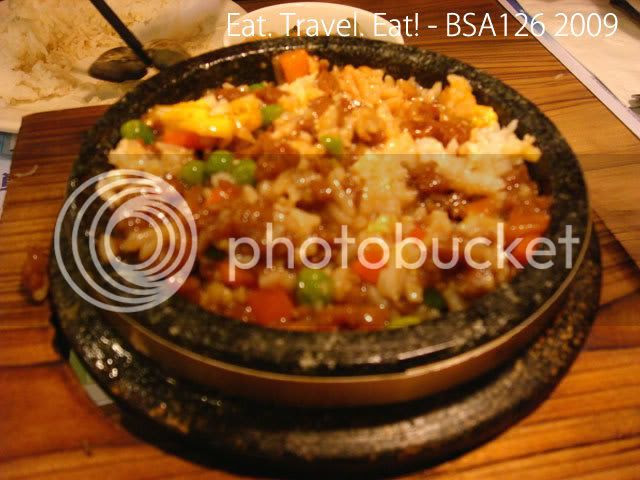 Here's how it looks stirred. Flecks of egg, meat, veggies, and rice. This didn't seem to be much special though. It was more like a regular minced meat rice except for the fact the rice was crisp like how it should be in a stone pot. The beef flavor though, was all over the dish which is nice.

Overall, a pretty good meal, but a tad oily. Our friends agree that we would come back to this place. However, if I had read the Yelp reviews in the first place, I don't think I would have even visited this place. This place on yelp only has only one and a half stars.

The red bean soup I spied was not for us. I don't know what it was even there for. No pre opening savoury soup either.

They also offer Lunch specials as well as Breakfast, which is nice. Not all places serve breakfast, and they have lots of different choices too, which is always nice.

Anonymous said…
Looks yummy! And I do like the smile faces. Very cute, and quite wise to conceal the identity of innocent by standers ; ).

I totally get what you mean! Now that I think about it, it does look a bit like people wearing masks!
February 22, 2009

shavedicesundays said…
Drove by here and wondered how it was. I'm glad you did a post on it!
February 24, 2009

We were also wondering about how it was before we tried there. Glad that you are happy that I did a post on it! Since it was new I made a bump in my queue for this post :).
February 24, 2009