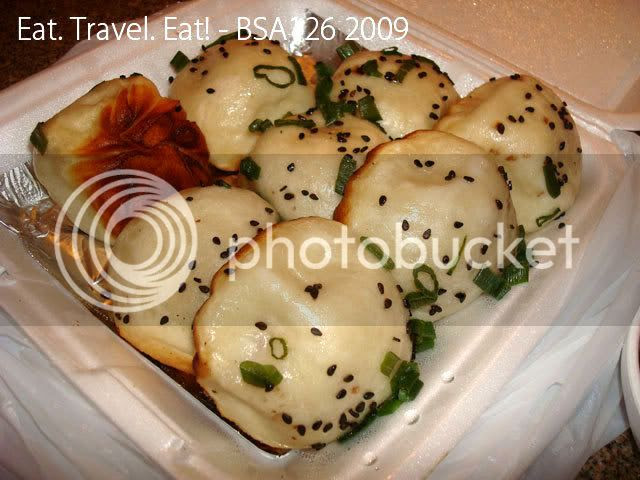 Don't these look delicious? I remember eating them from many years ago, and recently I got to try it again. And, we observed the restaurant and its business.

As you can see from the photo, we ordered these to go, and had to wait for almost 15 minutes for it. They really do make these fresh! While we waited, we saw them work, piling scoops of food for the combo plates, blending things for drinks, taking orders, and more!

This place really is huge. The steam table tray is one of the biggest ones I have ever seen before, and there are many choices. However, come early! If you come like at 7- 8 PM, the food that they serve looks terrible and dry looking. During our 15 minute wait, they never switched any of the items!

Shaved ice spans another portion of their huge counter, and they have many choices. However, their stuff seems to come from their neighboring Monterey Park location. How do we know it is even from Monterey Park? Well, the cashier was talking to a customer, and the customer was surprised she was at Kang Kang. The cashier then replied that she only worked at Kang Kang for one day of the week, and stayed at the Monterey Park location for the other days of the week. So...it is true! This place has several locations. The second reason why? Well, the "new" ingredients for later (as they were running out) came in a silver tub, but then there was a person carrying it in a plastic bag. She then left. So, it seems like they get it from their other location.

We saw people order their food, and one thing we saw a server making on the spot was the taro slush. How did she make it? Well, she took pieces of taro from the shaved ice toppings (a lot actually- about 8 pieces, and they are large!), and then took some of the liquid the taro was in for some sweetness. Then, she added a scoop of ice, and then the blender started to blend! As it was blending, about another scoop and a half of ice was added. The final product was very creamy and thick looking, and filled an entire plastic cup with a dome lid! A very good deal for the price.

After a while, we got our "Bao", which they claim to be the "best in LA". We then took it home, and after about 30 minutes or so ate it. There was some interesting things though, even before we ate the baos.

1. They actually punched holes to the styrofoam so that the steam wouldn't make the baos not crispy.
2.They put foil on the bottom of the container, as well as some vinegar on the side for the baos. Also, they gave some utensils and napkins too! 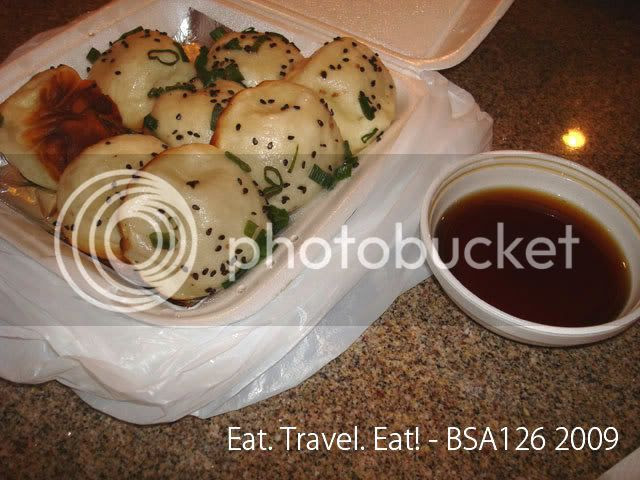 Here's how it was when everything got opened. But, I am sure you are urging to hear. How was the taste of the Shanghai Pan Fried Small Bao?

Well, the meat was slightly sweet, and had a great flavor to it. There was almost a spoonful's worth of juice when eating it! However, the dough seemed to have soaked up some of the juice, or they had too much dough for today. When I bit into the bao, the dough seemed to be more than what appeared to be in Shaved Ice Sunday's photo. The bottom had a mound of dough, which was different as the dough amount should be the same on all sides.

I guess this happened as it seems to be the bao got cooked a bit more than needed. As you can see, the bao's bottom looks really brown. So, probably the dough plumped up from the cooking or maybe from the juice as well.

Green onions and some black sesame seed were added too, but I don't think the black sesame helped at all. One of our friends thought it was more like gritty sand.

Overall? It was a pretty good product, but the slight mistakes this time made it not as memorable compared to before. The filling and the dough were all good, but it was cooked just a slight bit too long, and the black sesame seed didn't help the dish at all. If you plan to eat this, eat it ASAP! You'll really enjoy it, like us a few years ago. But, if you wait for a few hours and the bao gets cold, the baos won't be that tasty. The juice will mostly be gone, and it won't be as good as it tasted in the first place!

Who else ate here?
Shaved Ice Sundays had several of the steam table items as well as the bao and other items.

shavedicesundays said…
Yeah those ones you got look brown! How disappointing after waiting so long.
February 19, 2009

EatTravelEat said…
Shavedicesundays,
I agree! They usually are more golden brown. The funny thing is that we told them to rush it so it could come out as quick as possible, but then the product ended up being more cooked then less cooked!
February 19, 2009