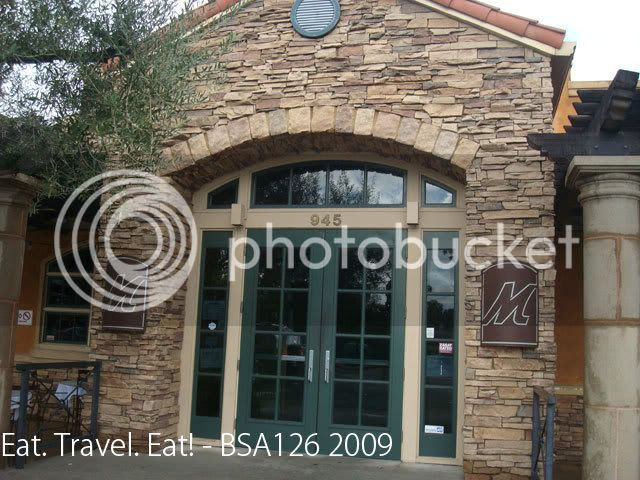 ***Update June 29, 2009: Romano's Macaroni Grill is now closed, to the surprise of me and other people. It always was pretty busy, with plenty of customers, but yet now it is closed. All the signage is gone, and it feels very empty at the intersection. There's also a huge dumpster right next to it. What will happen? We do not know.***
It stands out from the other places in its block- an oddball perhaps. No other building uses exposed brick in the block, and none look that fancy either. It catches your eye, as you pass by Huntington and Fifth. Yes, there may be other restaurants in the area which are just as fancy, but none are comparable to this for the outside architecture. 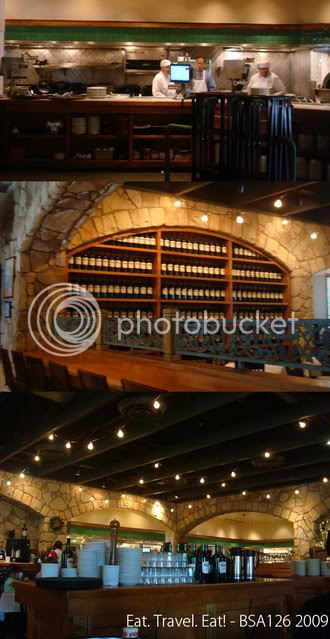 The interior is just as fancy. It seems almost if you were dining outside at a fair with the dangling lights. Each table is equipped with a huge piece of butcher paper which by the end of the meal, has been drawed all at, as well as a fine bottle of olive oil. Near the entrance, there is a kitchen, where you can watch all the action going on as you wait. It just makes you salivate while you wait. Also, there is a bar area, as well as a wine wall of their own house wine. 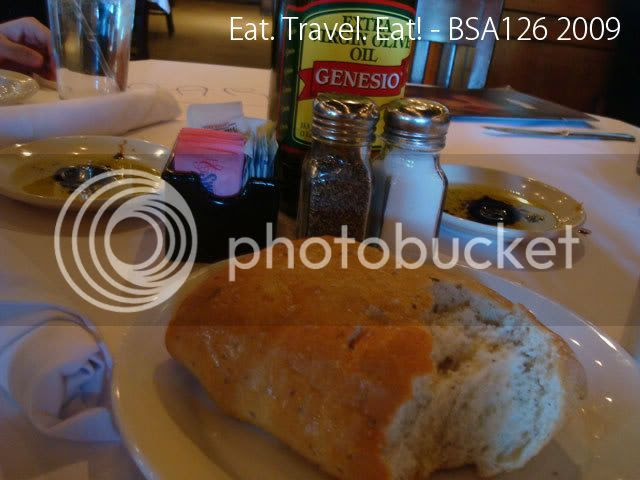 After getting seated, one gets a loaf of bread, which is tinged with some herbs and smells of olive oil. On the side is a platter of olive oil and pepper. Balsamic vinegar is optional, but at times, you may want it. While you sit in the table, servers charm you during your waiting periods for your food, writing their name in crayon. In this case, server Nate, which we had for our most recent visit, wrote his name artistically using 2 pens, and spoke 5 languages, and attempted to speak Chinese, which could be understood clearly. 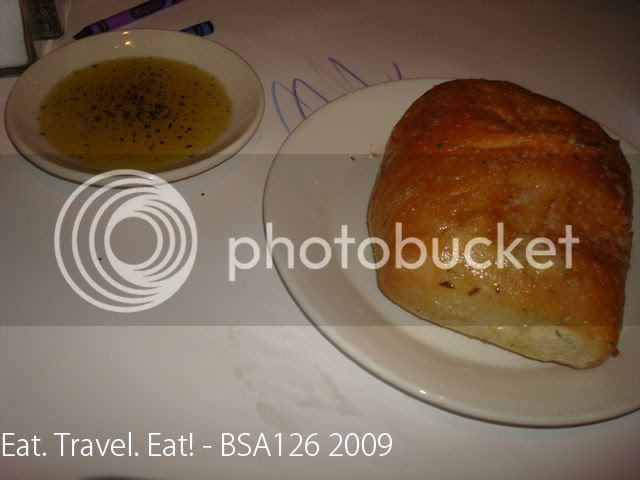 Today, there is no need for balsamic vinegar for bread. This bread today has been adorned with a hefty sprinkle of sea salt, which adds a very new dimension of flavor to the bread. Olive oil and vinegar are now no longer necessary. It is good as the way it is. Unless...if this loaf was a odd one compared to the others.

A favorite appetizer? Calamari yes please! A creamy, fresh Basil pesto aioli, wedges of acidic lemons, and a slightly spicy and very tomatoey pizzaiola sauce are serve along side. The calamari are crisp, and tender and slightly salty in the inside. For 8.49, it is a a great deal. But, the cheapskate in you remembers that a year ago, the serving was even bigger... 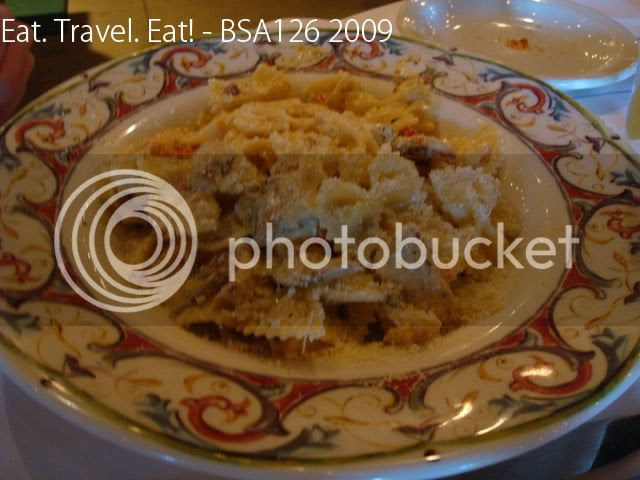 One special here is Pasta Milano, which we had at an older visit. The website describes it as:

And whenever you hear the word cream sauce, it is pretty much obvious that the dish is going to be rich. The sauce embraces everything together and is creamy. Sun dried tomatoes add a zing to the dish, and the chicken is really, in truth, tender. The pasta is al dente and soaks up the sauce nicely. Eat it here though, as if you bring it home, the oil pools up, and the whole dish doesn't taste as great as it was before.

Another great item is the grilled salmon with orzo pasta. The salmon is incredibly tender and is cooked with precision, and is slightly sweet. Orzo is tossed with some oil and spinach, and is al dente. Sorry, but no photo. 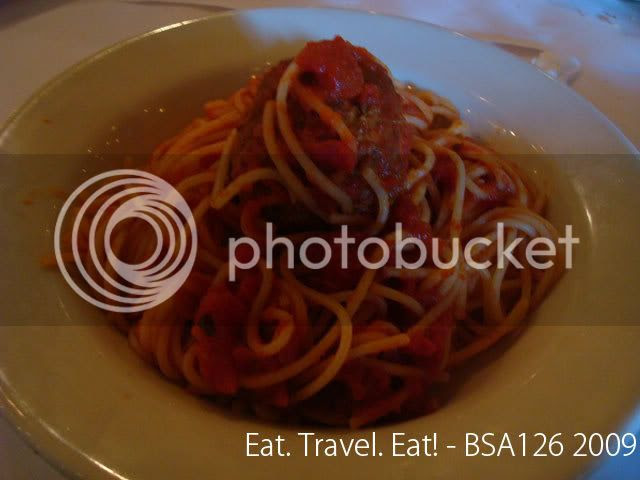 Kids Spaghetti from a previous visit is nothing special. After all, if you've been carefully watching in the kitchen, you know that the spaghetti (and probably spaghetti only as the other pastas taste freshly boiled) is precooked. Sauces are added to it only later on, and then the dish is served.

Being precooked already in the first place, this dish is well, decidedly ordinary. The tomato sauce is just tomato sauce. The spaghetti isn't that al dente either. However, the huge meatball which adorns the top of the dish is tender, meaty, and delicious.

Another kids menu item is the pizza, which the cheese is of a very high quality and stretches far compared to most pizzas. The tomato sauce is bursting with flavor in this case, and the dough has flavor from the oven it was in. Sorry, no photo, but the size is about California Pizza Kitchen's kid pizza. 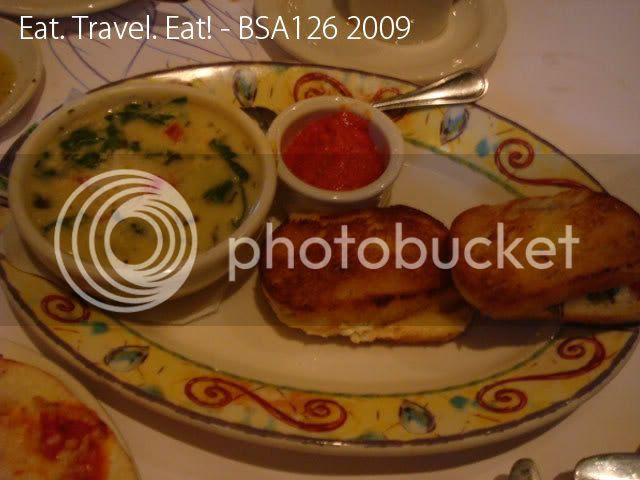 Recently, you've also have been probably hearing about their new lunch specials- the Roma Combos. At 6.99 for two items (one main course, and a soup or salad), or 8.99 for three items (one main course and two soups and/or salads), it is a pretty good deal, that does make you full enough for the day. The soups are all hearty, and although the main courses aren't that large, they are packed with flavor and are tasty. Above here is the Chicken Toscana soup with the Formaggio Melts. Chicken Toscana soup is creamy. Server Nate describes it as half cream base and half chicken stock, and filled with fresh spinach, tomato, onion, and gnocchi, and says it is his favorite soup. And it is very good too. The Formaggio melts are described as mini Italian grilled cheese melts with mozzarella, Parmesan and ricotta cheese with roasted tomatoes and fresh basil on toasted rosemary bread on their website, and the description is accurate. The small bowl of sauce next to it almost tastes just accentuates the tomato flavor even further. Slightly peppery and very tomatoey, it almost seemed similar to El Pollo Loco's house salsa times 10 in flavor. 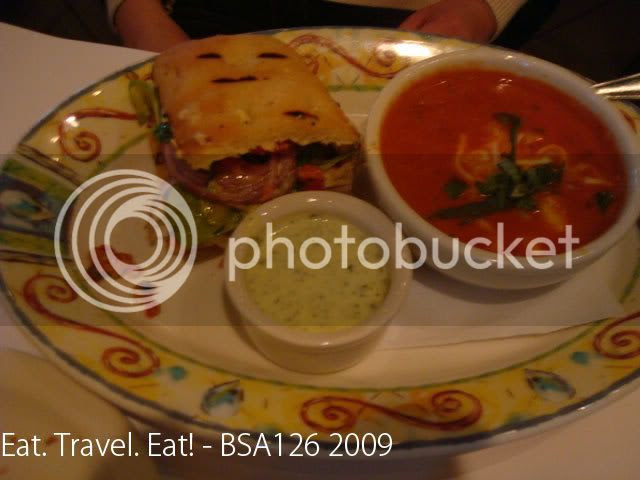 Another set of Roma Combos is here. A chicken artichoke sandwich, which is described as marinated, grilled chicken breast topped with fresh bruschetta tomatoes, arugula, red onions, Romano cheese and lemon artichoke spread on ciabatta bread, and a seasonal soup, which in this case is a very hearty, and tomatoey tomato soup with some cheese on top. Served on the side is a small bowl of basil pesto aioli. Servers from all over ask how was the chicken artichoke sandwich; after all, it is a new item. The main players, chicken and artichoke, stand out in this dish, and the other flavors are not as pronounced, but are still standing in there. 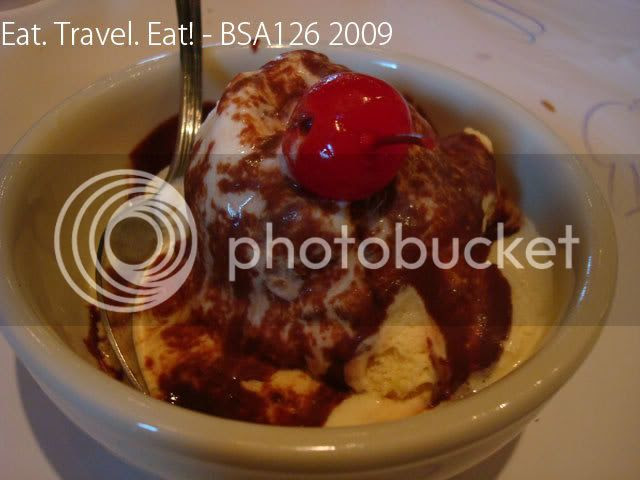 And to round things out, if you have a kids meal, you're getting this dessert to go along with it. Some ice cream, in a rich, very chocolate-y and slightly hazelnutty sauce topped with a maraschino cherry. Obviously, the thing that is special about the ice cream is the sauce on top, which almosts forms a skin of chocolate when it arrives on the table. How to replicate it? Answer as of right now, unknown.

Yep, pesto is yummy! In this application it was great!

Unknown said…
i am very interested in the Chicken Toscana soup with the Formaggio Melts...i should try doing the soup at home *grin*
February 18, 2009

I think you could easily make that soup at home! I should try too. So many dishes cooked at home can be inspired by a restaurant right? :) We have just tried one dish which we then made at home.
February 18, 2009