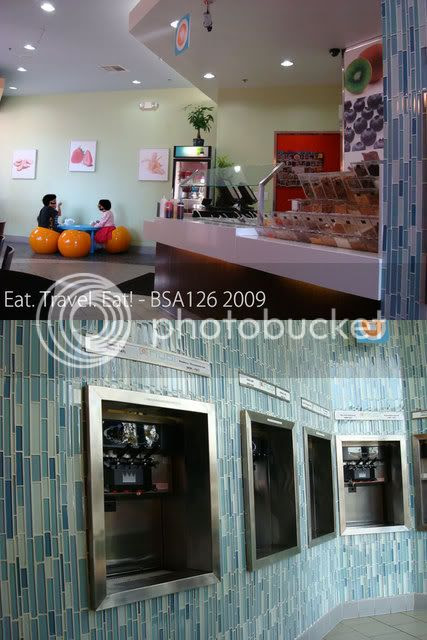 Reviews from both Wandering Chopsticks and Q from Brand Eating were both pretty much positive on this place! So, when we were recently in the area, we decided to sample out this place.

The interior is modern, with many bold colors throughout the store. Like their logo, there is lots of blues and oranges in the interior, as well as a splash of grey and green. The toppings area is different from your usual toppings bar- as for the dry items, they put them separately from the fruit in containers that are closed until you open it. There is also a seating area which has plenty of seating, as well as a cute kids table. Also, there is wifi, which isn't that common in all yogurt places.

What's great about this place is that everything is already placed right in front of you. For example, sample cups are nearby the counter, but the server doesn't need to give it to you, as it is already in your arm's reach. Same thing for the spoons. Also, there are waffle cups, which are also at hand's reach and are 89 cents.

Definitely, being somewhere we haven't tried before, we used the sample cup to try some different flavors. The flavor I didn't really like was the taro tart, which well, was a mix of tart yogurt and taro. In this case, the tart overpowered the taro, and it was a pretty bad combo in the first place. Our friend didn't like the pomegranate/raspberry yogurt.

Obviously though, there were some really good flavors at Nubi. Two of which ended up in our final cup, which was 6.4 ounces according to the scale and cost 2.28 USD. At 38 cents per ounce, it wasn't that cheap compared to Yogurtland at 30 cents an ounce. However, in the receipt, the cashier apparently only charged me for 6 ounces worth. It's nice of Nubi to take off the weight of the cup! 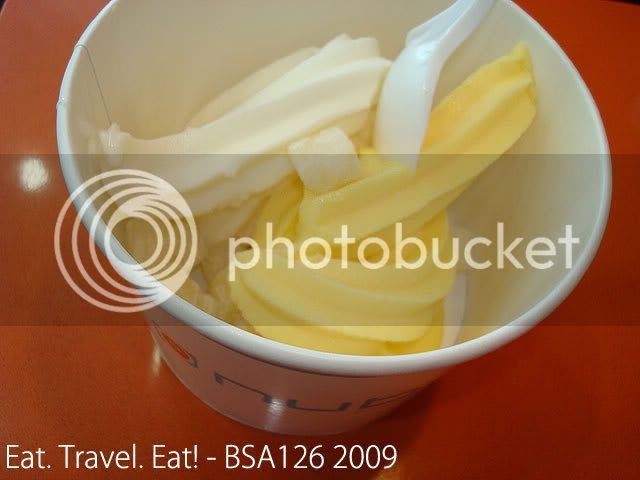 What was in the cup? (Yes, I did try to swirl it, but no, I wasn't too successful as for one part, it pumped ultra slow, and then I stopped pumping and pumped again (dole pineapple)
while the other machine (original tart) pumped so fast I couldn't control it!) Well, there was original tart yogurt, Dole Pineapple, and mochi. I didn't pump too much as my cravings were not as high. Hence less yogurt. I think next time I should just make a big swirl, but I always forget to do so!

Anyway, everything was well, great! The original yogurt was excellent. It was creamy, but not awfully creamy, and slightly tarter than Pinkberry. The first thought I had was that this was so similar to Pinkberry! No other yogurt place has got such great flavor to the yogurt.

Dole Pineapple Sorbet, the other flavor we got, was basically the most popular flavor of the all the flavors. As we saw customers come by and pump their yogurt, almost everyone had at least a bit of the Dole Pineapple. Wandering Chopsticks mentioned this flavor specifically on her blog, and so the first thing I did with my sample cup was to get a sample of Dole Pineapple, and it was excellent! The flavor was just like drinking pineapple juice, but sweeter- just like how canned Dole Pineapple is like. No wonder why so many people got this sorbet!

Mochi, which was the topping for this yogurt, did not have a lot of powder on it, and it chewy and smooth, and not grainy or dry. Good work! The other toppings were pretty fresh too.

During the sample round, we liked the Dole Pineapple over the original, but as we finished half of the cup, we seemed to like the original better. Probably because the original was less icy. At the end, I still wanted more, but a bit was enough! Portion control it is.

Good experience here. I wish Yogurtland could make their yogurt (of those same flavors we had at nubi) as good as this!

Just yesterday, I went to this mall near my house, they just opened an ice cream yogurt named "sour sally". I didn't try it because pretty amazing the queue is very long although the prize for a tiny cup (not even a scoop of ice cream) costs Rp. 30.000 which equal to 5 bowls of chicken noodles on the street, hehehe...

Sour Sally must have a lot of hype behind it to generate so much business!

I'll remember to make the BIG swirl next time. You can partially see the formation of one swirl in the photo, but then it is cut off when I pumped the second time for the dole pineapple.
March 01, 2009

tigerfish said…
The weather feels hot and humid now that I want some yogurt.
March 02, 2009

Everyone seems to agree with you too! This weekend here, people flocked all over to the yogurt and ice cream places. Yogurtland in Arcadia was packed and everyone was indoors because it was so hot outside! And more people were toting the yogurt cups compared to other weekends.
March 02, 2009

SinoSoul said…
the Dole's Pineapple Sorbet flavor tastes JUST the same as Oahu's Dole Plant. Think about saving a flight to Hawaii vs. 0.38 and it becomes a killer deal!
April 02, 2009

I never knew that! Well, that is of course, as it has been like 9 years since I went to Hawaii...

If that is so it is a killer deal. I'm waiting for Nubi to open up in the Westfield mall expansion. The frozen yogurt war rages on...
April 02, 2009

That is interesting! So many places now have italian names for yogurt now. At first I thought nubi was a name the company made up. Thanks for telling me!
June 24, 2009