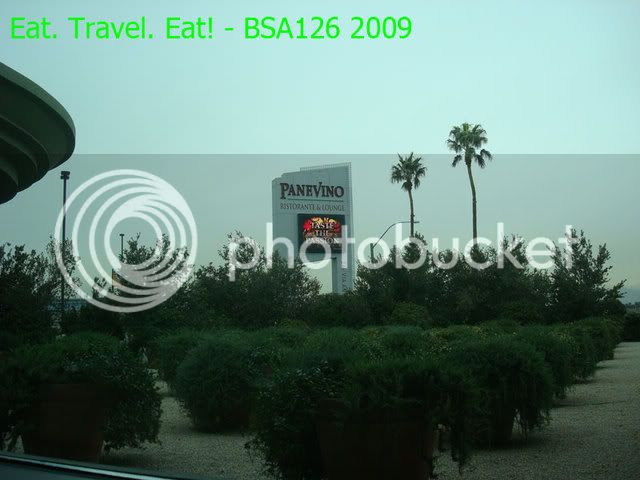 What is one way to spend your airline miles when they are soon about to expire, but you don't want to fly? Get gift certificates for restaurants! We got ours from a place called "Restaurant.com" which had this restaurant, as well as other restaurants around the country. If you haven't heard about it, it is a place that sells gift certificates for a reduced amount of money- at times only 3 dollars for a 25 dollar certificate.

Time warp. It's already almost the end of December 2008! And we are here, after using the nifty GPS to get here. Everyone else in your party thinks you are weird. Are you? Somehow you found this place which is almost steps to the airport! Restaurant near the airport= ?. Not all of them are good. Will this be? Maybe. 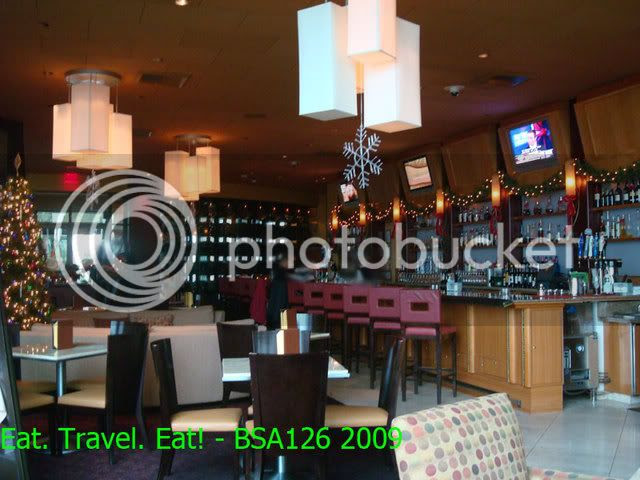 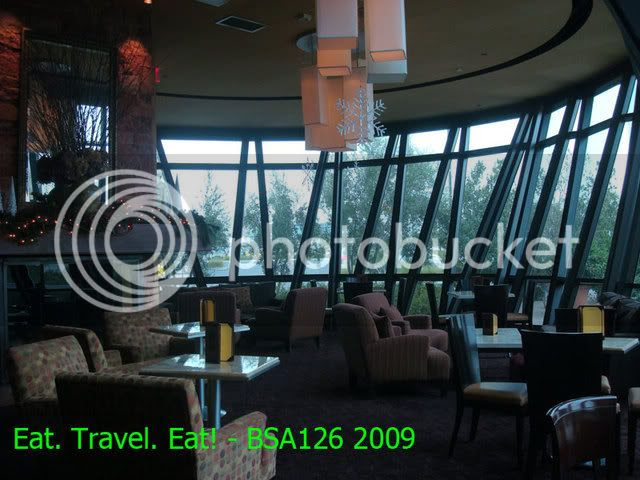 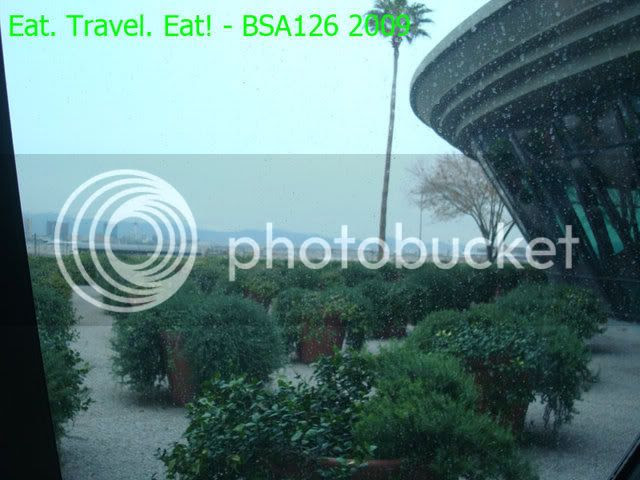 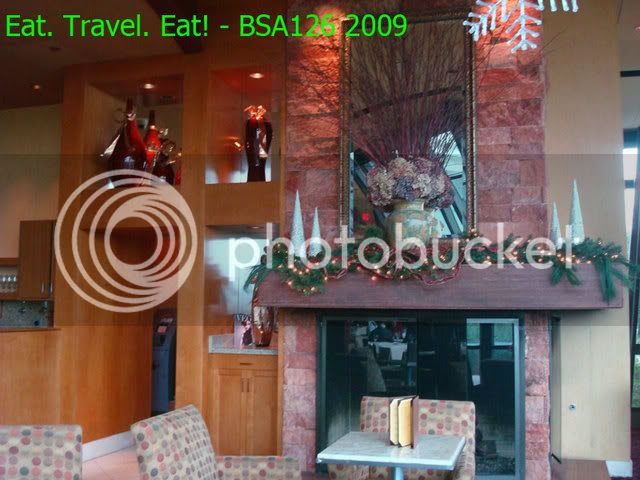 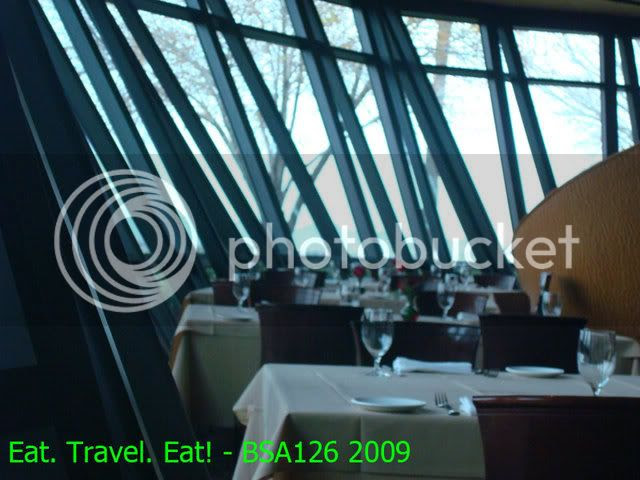 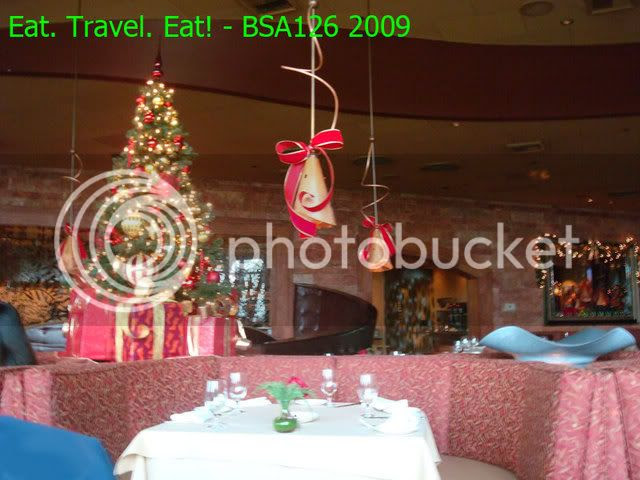 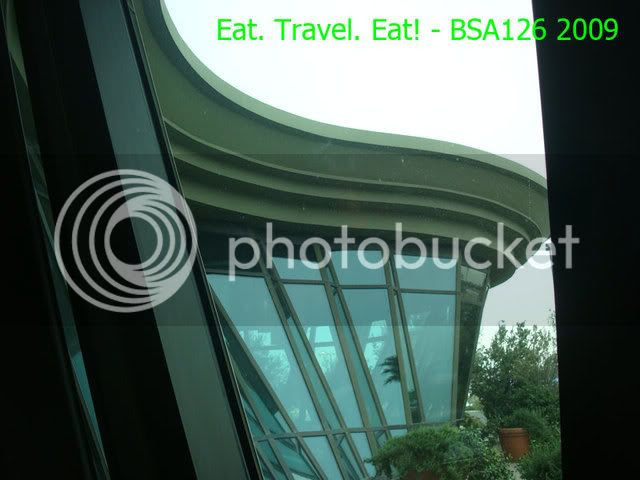 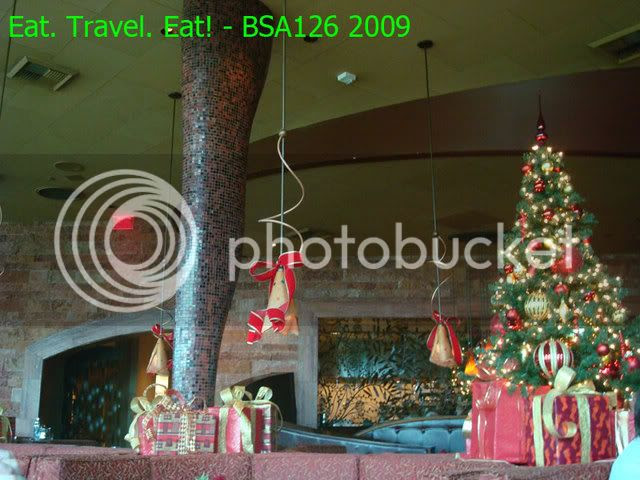 As you enter the restaurant, a lady greets your party and very nicely brings you to your table. First impression? BIG fat table for just four people. Could have sit 6 at a HK style cafe :). However, after you sit down, you start to notice the interior. As seen on the internet, the architecture of this place is simply AWESOME. The curved glass! The tile! The fabrics! All are things that you are wowed at. Everything has a warm tone to it- browns and beige.

Plus, there is also a bar and lounge area to the restaurant, but pretty much no one was there. Probably would be full at night. 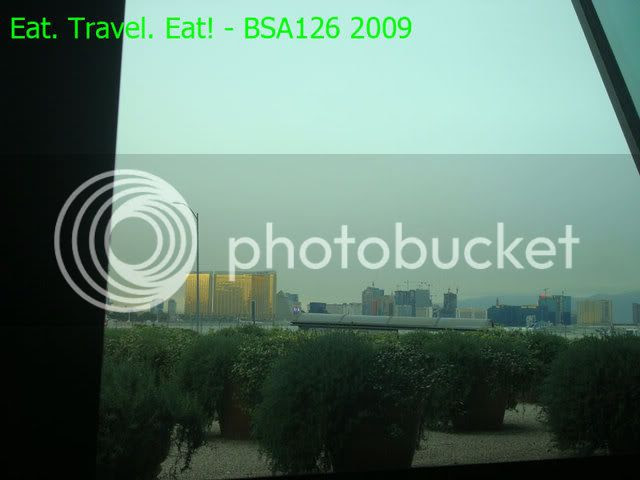 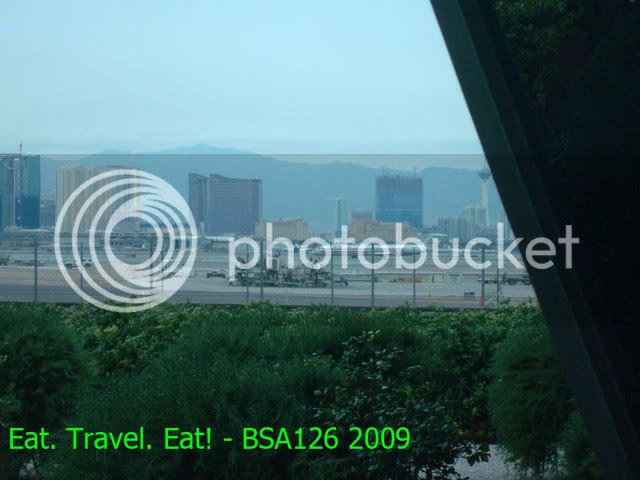 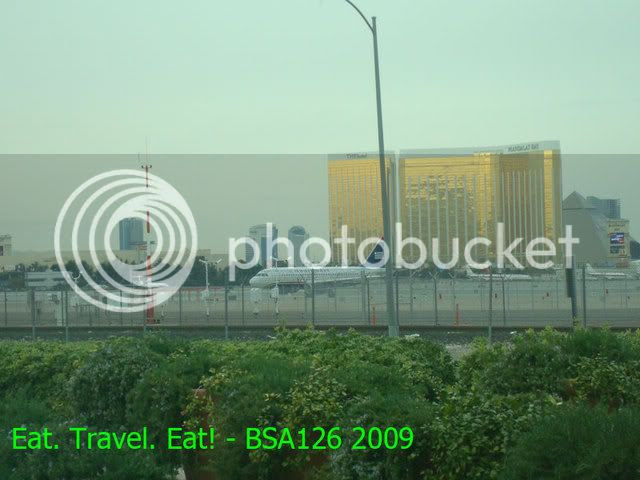 The second thing that wows you after looking at the interior is, well, the planes! And the pulchritudinous view outside. Only hampered by the cloudy weather though. Lots of special livery planes that day- a Nevada Southwest and many, many more themed Southwest aircraft. And you wonder now: is that US Airways A320 you took the one that went into the Hudson river in NY? Or not? 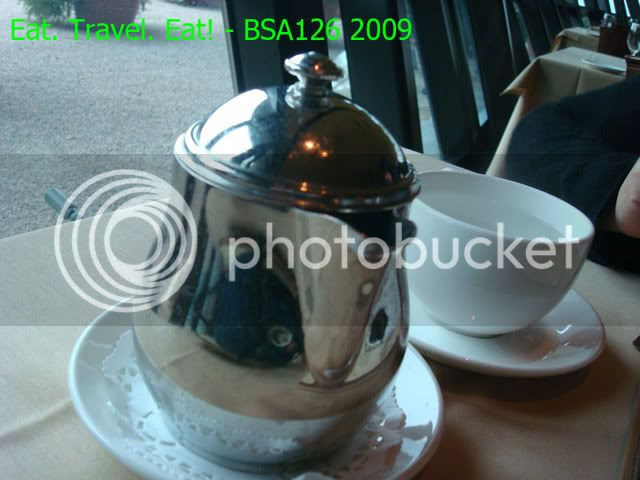 Not long after the server has given you the menu, he also comes around to take your drink order. You ask,"What is special here? What do you have?" The response? Everything and anything you like. WOW.

You see, no restaurant has done this ever. It's pretty much only in Vegas which this can happen; only places like the "Mansion @ MGM Grand" do this type of speak. You let them down: you just want some ice water and hot water. Amazingly though, the hot water then comes, in this beautiful, curved, metal pot. And every person gets one! Again, almost no where does this. California Pizza Kitchen, which was recently reviewed by me, only gave one pot for 2 people.

A few minutes later, you order. But before you do order, the server says this again: if you want to eat something that is not on the menu, we will make it for you! WOW. Again! Anything you wish, huh? Well... 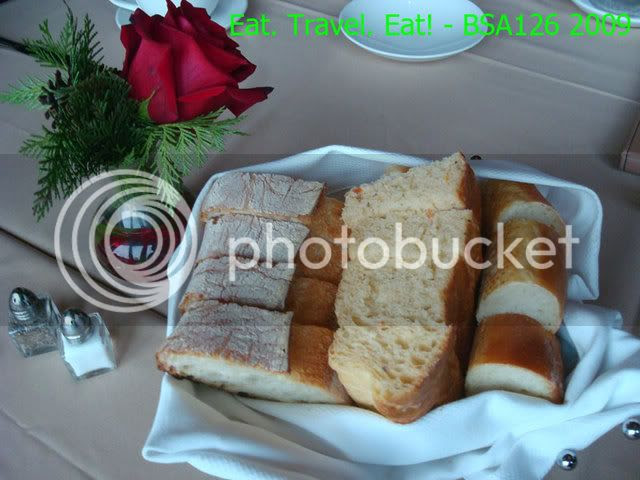 Right after you order, another server starts to prep your table for your eating enjoyment. Salt and Pepper, bread, and vinegar with olive oil is placed onto your table. But look at that bread!

It was not some low quality, ho hum bread. This bread probably was made by the next door "Panevino Deli" that they probably operate as well. And being so close to each other, it means the bread must be very fresh. The interiors of each bread are pillowy, soft, and have a good chew, while the outside crust has a great crackle and is slightly hard. Like what the movie Ratatouille said, "Only great breads tastes this way." 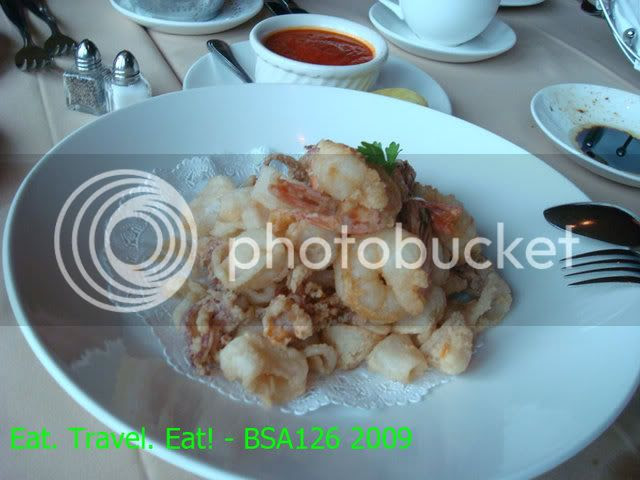 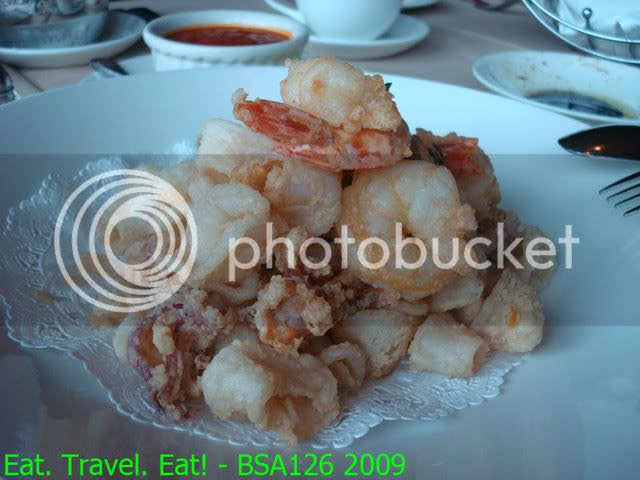 A few minutes later, your appetizer arrives: a mix of fried shrimp and calamari. Each bite is savored. The calamari, which is big compared to other restaurants, is lightly salted, and there is a slight taste of the sea. It is just cooked so it is tender, and very flavorful. No feeling of rubber at all.

The shrimp is also, just as tasty. They are plump, slightly salty, and very tender. The light crisp from the breading accentuates the taste experience.

On the side, a half of lemon in cheesecloth and a bowl of tomato sauce is served. The sauce is very intensely flavored; very tomato-y and even has a slight spiciness to it.
As you finish the appetizer, you seem to want to savor every little bit of calamari left. You fight over the small last piece, and the server is happy to see that. :)

And before you do get a main course, something unexpected happens. Somehow, your water glass slips and falls onto the table, spilling the water to almost half of the table. Within seconds, two people come to the rescue, placing 2 pieces of the cloth napkins to cover up the spilled mess. The other person then refills your water glass. That was quick- and it is a good sign of service too. After all, you never even waved them to come by- they came by themselves. 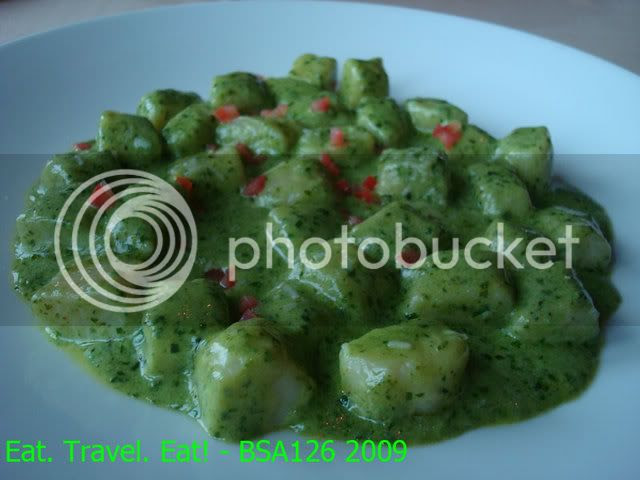 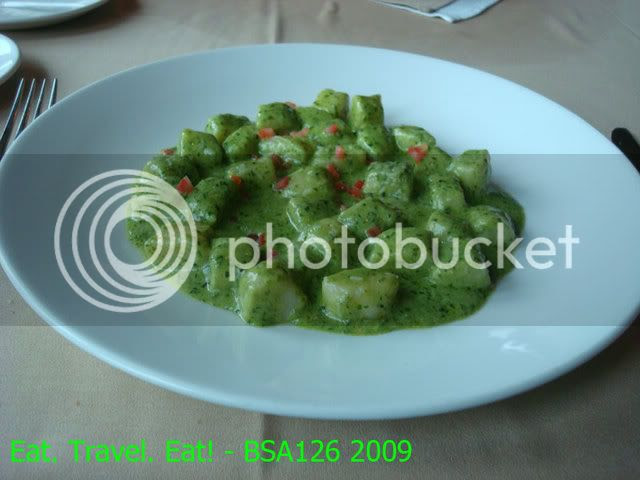 Not long after, the main courses arrive. You order a gnocchi al pesto, which has some "fresh shaved aged" ricotta cheese and diced tomato on top. The texture of the gnocchi is interesting; it is actually very pillowy, and slightly chewy. Almost like mochi, but not that sticky or chewy. The pesto sauce is just enough for the pasta, and it is bursting with flavors of basil, nuts, and cheese. And the diced tomato adds a nice zing. Good dish! 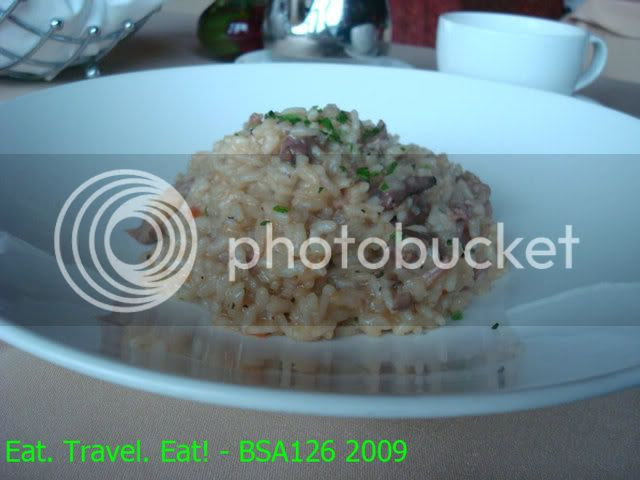 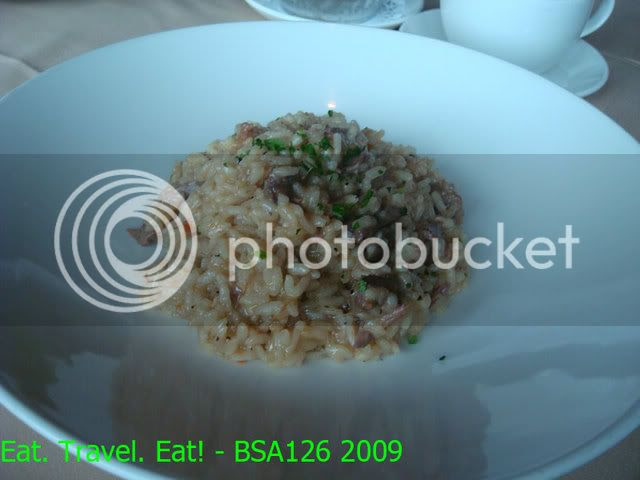 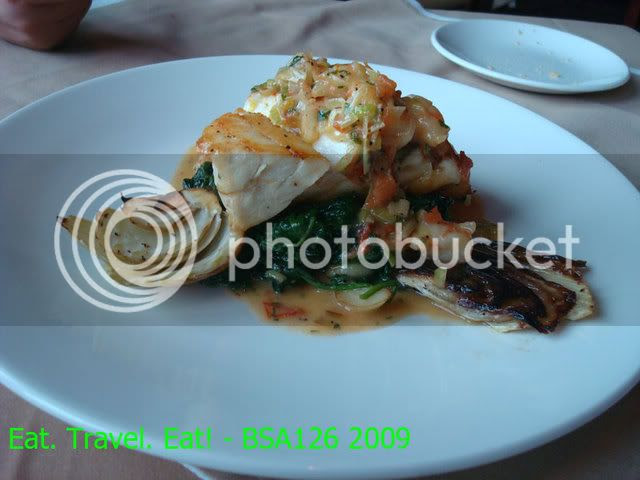 Lastly, there was a halibut dish, also a special order. It came with lots of vegetables on the side, and a large halibut steak was proudly standing in the middle. The halibut was fairly flaky. It was a bit similar to seabass which is available in CA, but not as buttery.

You also see some people order their dishes, and one of the dishes that amaze you is their pizza. It is HUGE! And fairly thin too. Kind of rustic too, as it was served on a wood platter.

Another dish that one of your friends noticed is a dessert which had multiple items. Sadly,you do not know what it is as you already asked for the check.

A satisfied meal? Yes. Happy? Yes. After all...that view was just astounding. And the service was great. And the food was, well, pretty good!

Selba said…
Wow.. how nice!!! I didn't know that you can redeem your airline miles to gift certificates for restaurant...

Call me too imaginative, but seriously, looking at the tea pot, I feel like I'm looking at a reflection of a light brown "Dinasaurus or dragon's head", LOL
February 09, 2009

Anonymous said…
I love Panevino - for the view and the food. Yummy.

Great blog! I just found you guys. What a cool gig.

EatTravelEat said…
Jules,
Hope you enjoyed your visit, and thank you for the nice compliments! I agree, Panevino is a great place not just for the view and food but also the service! They really use high quality stuff- recently, we ate calamari at another restaurant, and those calamari were pretty puny compare to Panevino.
February 10, 2009

shavedicesundays said…
How were the prices here? Affordable?
February 11, 2009

EatTravelEat said…
Shavedicesundays,
This restaurant was more on the expensive side- about 10-30 dollars an entree. However, the ambiance in here really is high end (unlike Woo which I rated lowly for the high price), and the view is great. Also, the location is in a business sector...so they might charge more for that.

You can see their menu on the clickable link I made at the address part too for the prices.
February 11, 2009