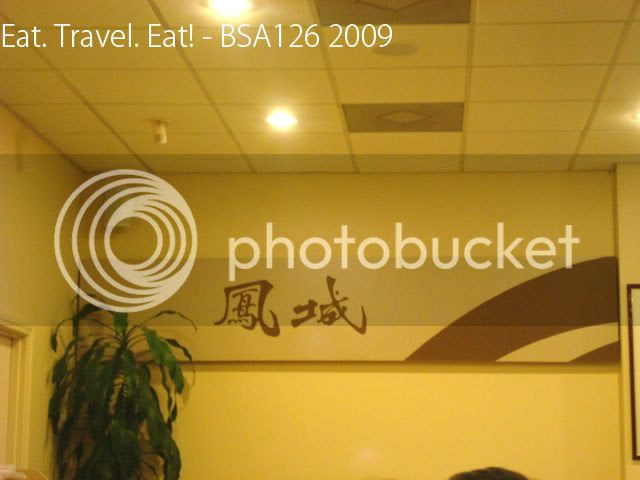 Phoenix Inn, Alhambra CA- Logo wave at back of restaurant

You know, it isn't very so often where someone would eat at two different places that are owned by the same group of people in one day. Sometimes it does happen though. Today's contenders? Arcadia's Phoenix and Alhambra's Michelin Guide "recommended" Phoenix Inn. 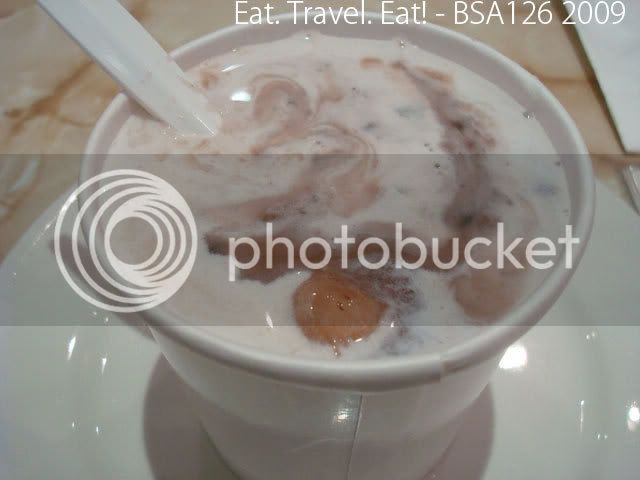 It was afternoon, and on such a nippy day, the best thing to warm you up is a hot liquid. Hungry for something sweet, we got this forbidden rice and taro dessert soup at Phoenix in Arcadia. We've had this before, and it always was of a thick consistency and before we bought it, coconut milk was mixed in for us. This time though, was different.

We got the coconut milk on top! It's fun to create swirls of the dessert soup and the coconut milk- it's also very pretty at a glance too. However, the taste wasn't really that sweet compared to before, and the soup was a bit too hot and thinned out. The taro was tender, and there was also diminutive balls of tapioca floating all over the dessert soup.

Move the clock 3 hours later, and Phoenix Inn is for dinner. A "Taiwan" Festival and "new items" have been going over the airwaves these days, and so we were interested in trying Phoenix Inn again, after not going there for a very long time. So...we went in, and the first thing that greeted me as I turned right to go to the cashier desk for seating was a Michelin recommendation. Hmm...does this mean this place is good? After all, our past experiences with "rated" restaurants have been not always great. 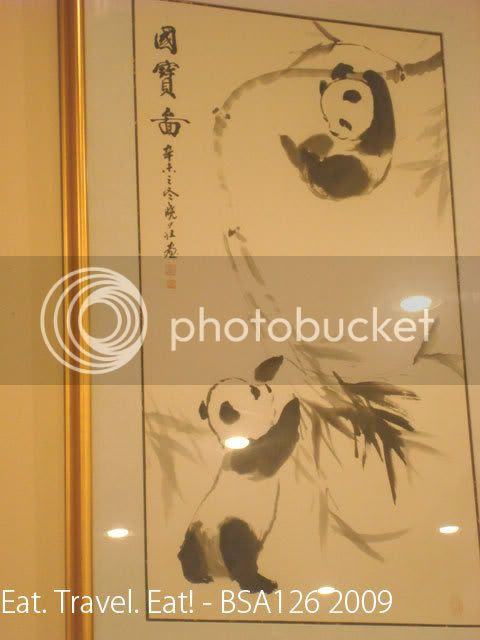 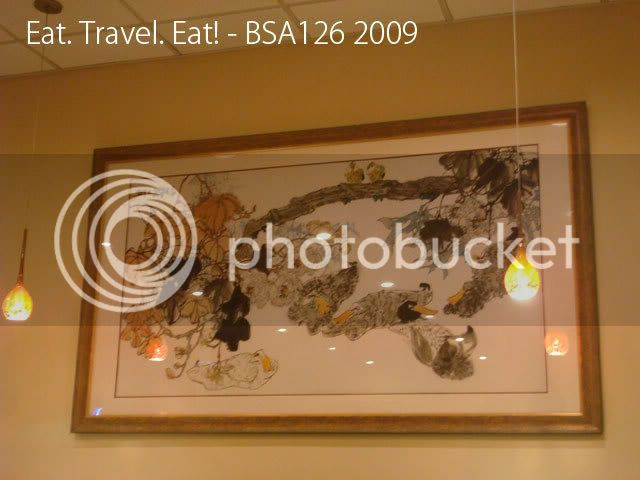 As we got seated, we all noticed the paintings all over the place which were very beautiful. The panda painting is definitely very cute, and was in close proximity to our table to glance at.

The second thing we noticed was this more "upbeat" style music that had lots of beating and rhythm. I wonder why. Chinese restaurants rarely have this type of music flowing through their restaurant....

The third thing we noticed was that there was a doggie window that attached their "dessert" store to this restaurant. This way, if one ordered something sweet, the item would be passed from the dessert area to here through the doggie window and then to the customer. Smart idea!

What is the new items? What is "Taiwan" Festival? Well, these are some of those items from this new menu. Above is a mushroom with bell pepper appetizer which was served COLD for $5, and a RAW sliced pumpkin with grapefruit and passionfruit sauce. Interesting take on items. I liked the mushrooms and the bell peppers, but one taste and you know you obviously can make it at home! It was slightly tangy, and the mushrooms were cooked, and the bell pepper was crisp.

The pumpkin for another matter, was unedible. It was extremely hard to chew and to even bite. The sauce was again something you could make at home, and the garnish on top that looks pinkish was actually some pieces of grapefruit! They should have cooked the pumpkin. Off to the steamer this went after we doggie bagged this home.

What came next? Corn and Fish Maw soup please! This isn't on the menu, but it costs the same as the crab with fish maw soup, which is 10.95. There was a very good amount of fish maw in this, probably because we didn't get crab. However, the corn and the soup were almost tasteless! The soup only had a salty flavor- no other special components were added. Pieces of corn were not abundant, and that led to a lighter yellow color compared to other restaurants such as Embassy Kitchen which has a great corn and fish maw soup. 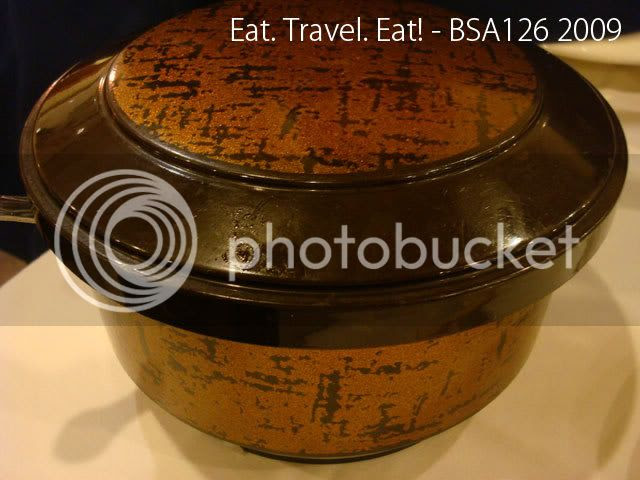 Before we got any of the items though, we got rice. It's served in an interesting looking container too, which I haven't seen before. Then, 3 other dishes came. 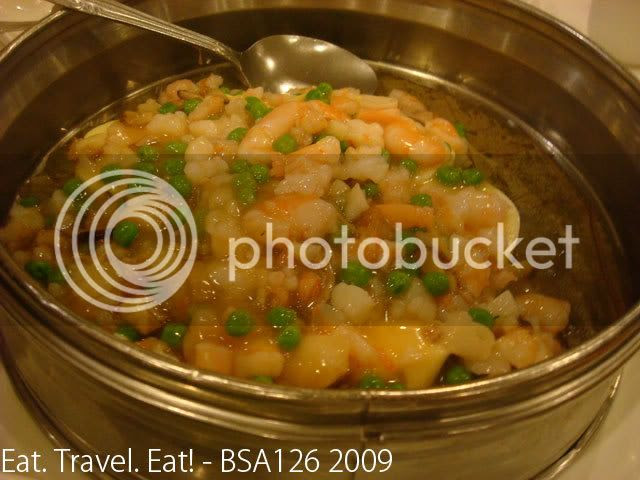 The probably best dish of the night was this. Egg tofu that was steamed and then topped with mixed seafood for 9.95. In this case, the topping had scallops, shrimp, peas, and mushrooms. It tasted great- the sauce was lightly flavored, and the ingredients had bursts of flavors, and the tofu was soft and velvety. It inspired us to make this at home, and we got almost the same result :). (home recipe HERE) 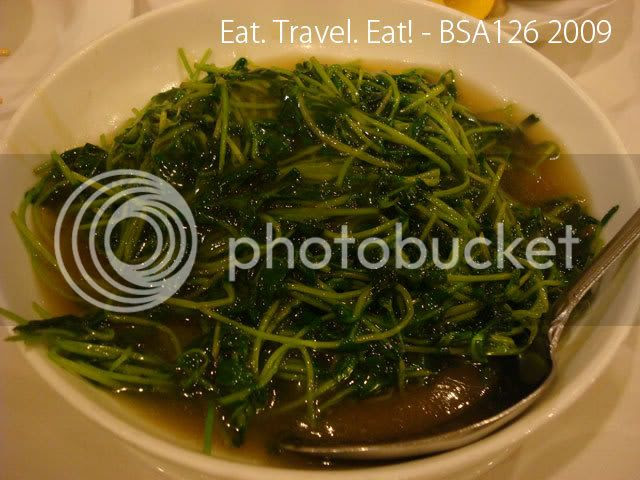 Another dish of the night was stir fried pea-tips for 8.95. This was nicely cooked and was crisp, and the sauce was cornstarchy and flavorful. MSG added? Probably. 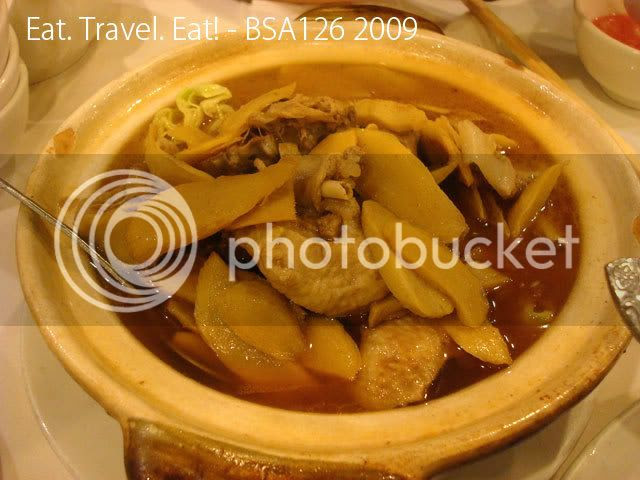 The last item of the night was a duck and ginger hot pot. It tasted good with lots of duck and stewed flavors, but the brown layer on top was all oil, which we certainly did not like. And no, it wasn't fatty oil either. After a night in the fridge, it was still in liquid form. Makes a great soup though when you cook it with some other ingredients! Fermented bean curd sauce was served on the side.

As we continued to eat, that rhythmic and upbeat music was starting to get really annoying. It seemed to be like a fashion show type of music where the models do the catwalk. Another interpretation? The restaurant wants you to get out ASAP as you finish your meal. And many parties actually did. People who came after us left before us.

Overall? Phoenix Inn was really nothing special. Lots of the items can be made at home without any special materials like a wok. It was also really oily, and not all the items were really flavorful either. The items we came for (the "new items") were disappointing, and although innovative, didn't taste that great.

Ah.... don't we hate loud and upbeat music when we are having dinner? Yup... psychologically, it makes you eat faster and leave the place sooner. That's why most of fast food restaurant are playing fast loud upbeat musics.
February 22, 2009

I like the panda painting too! And I want to draw it by hand someday. Loud music is so annoying, especially upbeat music. In my area, none of the fast food places played their music as loud as Phoenix, and none had the huge beats. And their Arcadia location didn't have music that was annoying at all! But it was probably because there were too many customers that weekend so they had to do so...
February 22, 2009