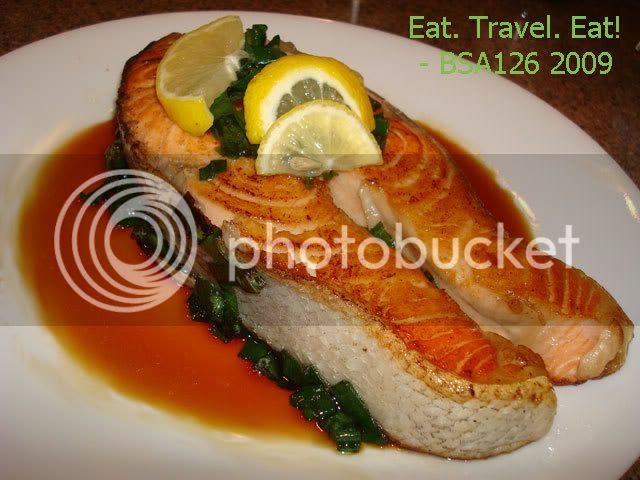 It's been a while since I last posted something homecooked, and so here I am today with a salmon dish we recently had. We make our salmon in two ways, and this is one way- simply cooked with lemon, soy sauce, and sauteed green onions.

The added flavors cuts down the fat oiliness of the fish, although you could add less. One of our friends here doesn't like the fishiness that much so we make precautions just in case. And besides, the lemon and green onions add a great flavor to the dish? But how is important.

You can add the lemon while at the end of cooking, or squeeze a bit of the lemon onto the salmon after cooking, but still let it sit around. Adding the lemon while cooking gives a slight lemony fragrance and the acid slightly penetrates in. Adding the lemon after cooking still will have a bit of lemon flavor, but if you add just a bit, it won't be sour and puckering, but rather enjoyable. The other added ingredients also help.

Lastly, the abundance of green onions cuts into the fatiness of this dish. The ends, as well as the skin, are very fatty. It's kind of like a palate cleanser while eating the fish so that your mouth doesn't get too oily all over.

The end result of the dish gives a salmon a great flavor, and it is just cooked so that the inside is very tender, and not hard to flake at all. The texture is almost buttery, and the skin is crisp and delicious! 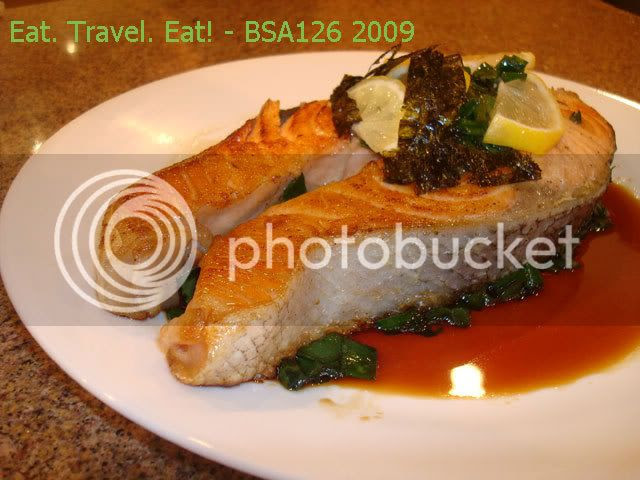 1. First, prep the salmon. Wash it a little, and pat it dry. Then, add some salt and pepper to both sides of the fish
2. Heat up your pan (we use a nonstick stir fry for this), and add about a tablespoon of oil. Just slightly enough to coat the pan very thinly. Then, add two ginger slices and fry it for about 30 seconds.
3. Place the salmon steak right on top of the 2 ginger slices. Then, do not move the fish around, and close the lid!
4. Tip and move the pan around, to kind of "steam" the fish using the condensed steam on the lid.
5. After about 5 minutes or so, flip the fish! Obviously, this will depend on your heat and your pan, as well as how thick your salmon is. This was about 2 inches.
6. Flip, and sear the other side! Do not move the fish.
7. When you are almost finished (4 minutes after for our steak), add about 2 handfuls worth of sliced green onions into the wok. The salmon's oils should have accumulated a bit from cooking (like from cooking bacon or meats), and so you don't need to worry about the green onions sticking. Cook the green onions until they look wilted and are shiny.
8. Plate the dish! Put the salmon in the middle of the dish, and then put the green onions to the side and in the hole of the salmon steak. This way, the soy sauce won't quickly penetrate the fish, making it too salty. Then, add the soy sauce to 2 sides of the dish. Add just enough to barely cover the bottom of the plate. More will get the salmon a bit too salty.
9. Squeeze a bit of lemon to the dish- we just used the sliced pieces in the photo which were just enough. After squeezing, put the lemon pieces in the soy sauce.
10: 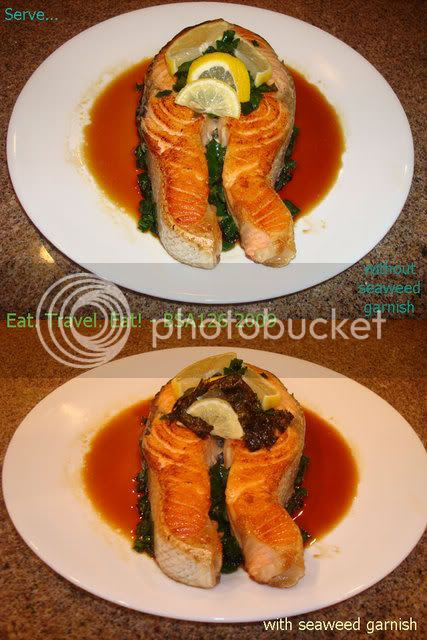