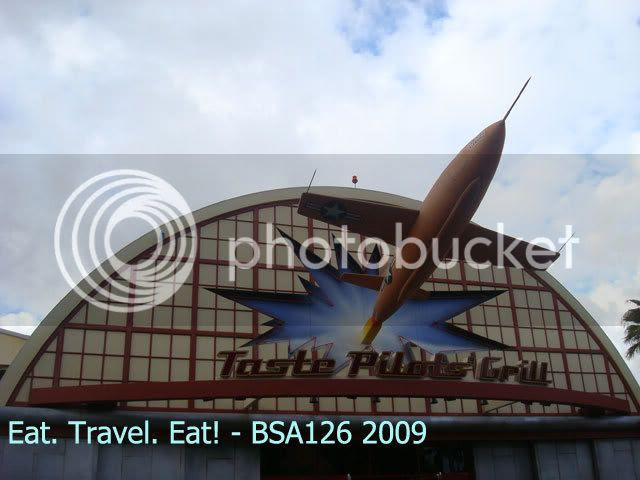 What is this plane doing in California Adventure? Why is the place so themed?

Well, this section of Disney's California Adventure seems to be highly transportation based. Nearby is a Cars (the movie) area, as well as Soaring Over California (a plane ride) right next door. Further out is a California Zephyr train. So...I guess this restaurant in general isn't out of place.

After a long drive to get here for a performance, everyone was hungry. One friend proclaimed, "The first thing we shall do is to eat. I haven't eaten breakfast yet!" Well...okay. It was almost 12 after we got our tickets. Serving customers isn't that easy of a task, isn't it? 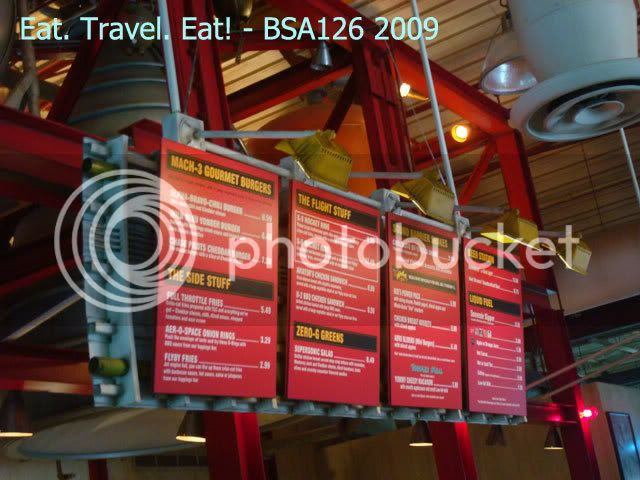 After entering, we saw the menu, which was also just as themed based.

What would be the second thing one would notice? The prices. 8+ dollars for a burger? That is a lot of money, considering this is more well, like a fast food joint. It isn't some beautiful, sit in place. Or maybe it is, as the whole interior is so aircraft like. Photos of planes are everywhere. 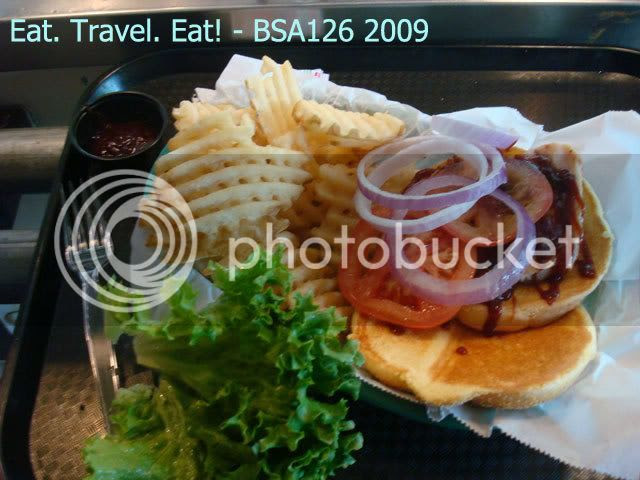 For lunch, I ordered a B-2 BBQ Chicken Sandwich, which was 8.59 before tax. I was expecting a browned chicken breast, with a bit of BBQ sauce on the entire chicken breast. Was the outcome the same? No. The employee gave me my order, and I was shocked. Now, you may think, hey, that photo on the top looks delicious! Well, I added vegetables to the photo as I was going to eat the sandwich with that.

What the employee did give me was the sandwich and fries, without anything else on the tray. In other words, it was a piece of chicken that looked mass manufactured and then a swiggle of their "house" Barbeque sauce. Uh...this wasn't what I was looking for! This looks like a school cafeteria meal that should have cost $4 or less! At least dunk the meat in the sauce, would you?

Why did they do this in the first place? Well, they have a HUGE toppings bar, with a lot of cut vegetables, sauces, and plasticware. You pile on everything else by yourself. I guess they get to be more lazy as now, they don't need to put the veggies on. You get to. 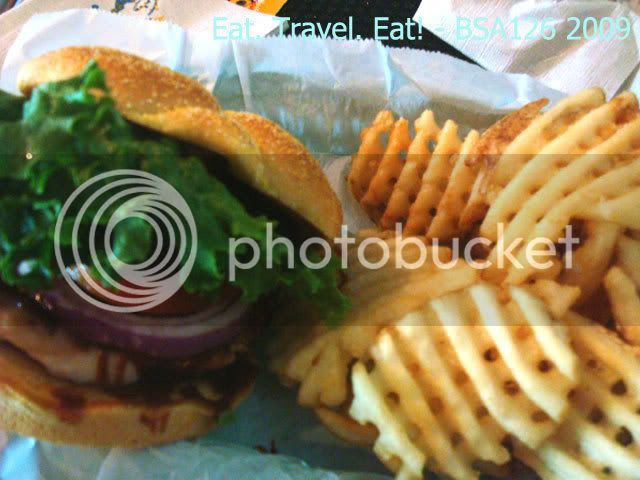 After some construction work, my sandwich looked like the photo above. Now, it looked pretty fat for a sandwich! Veggies do take a lot of space :).

Taste? Pretty good! The chicken was very tender, but the grill marks on it seemed to be fake. I liked the barbeque sauce, and the vegetables were all pretty fresh. Now, onto the waffle fries.

At first glance, they looked good. I plopped one into my mouth, and I barely tasted anything. Even though it had a nice crisp on the outside, there was very little potato flavor, and there was no salt! One of my friends had onion rings, which you can substitute for fries, and he said the fries were tasteless compared to his onion rings,which he seemed to like. They looked good too- crisp, and a dark golden brown.

Tick-Tock. After a whole afternoon, we were still full! One of our friends said, "Disney food seems to be pretty filling." I guess so! After all, we had gone on some crazy rides, as well as walk for a long long time. 5 hours later, with no snack, I was still pretty full. It seemed like other people though, were hungry. They were already eating 3 dollar churros (which were frozen in the beginning! :O) as well as drinking tons of soda and eating candy.

Tick-Tock again. With 45 minutes before closing time, and leaving CA Adventure time, we definitely needed to get something to eat after that long, grueling performance. After all, we were soaked in the rain! What is closeby? Taste Pilots Grill. I was wishing to eat the famous smoked turkey legs, but there was no where close by. Boo.

As we entered the door, the restaurant was full with people. Every table was packed to the max! However, eventually we found a table, and settled down.

It seemed like the employees during the nighttime shift seemed to be more friendly. The employee that took my order was worried I had nothing to drink (as I ordered nothing to drink), and so she gave me a cup of water. How nice! The midday crew didn't do that. 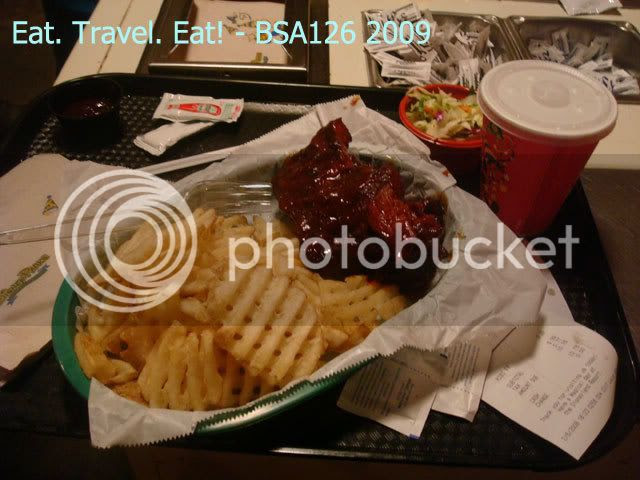 What did I order? The X-3 Ribs, for 9.99, which isn't that bad of a deal when you compare it to places like Claim Jumper's kids menu, which costs approximately the same as this. These ribs though, were big! It also came with a side of cole slaw which was not a usual, mayo loaded cole slaw.

My friend also ordered this too, and he proclaimed it as DELICIOUS. He seemed to love the barbeque sauce. Another friend, which used to live in TX, said these ribs were good, which is also another great sign to know. He ordered it for lunch, as well as for dinner too! Certainly, you could taste the quality- there was a good flavor in the meat, and it was fall off the bone tender for the most part.

Some other people also had gotten more than 3 pieces of ribs in this- some got 4, some got 5. So, if you are going to order this, just order the 3 piece. I got a really big piece, which was basically worth 3 pieces. And if you love soft bones, these ribs had soft bone in each one! However, it was a bit hard to chew.

The waffle fries in the evening were also better. Properly salted, they tasted great. Or was it because we were too hungry? Probably not. Plus, my serving of fries was HUGE! I couldn't finish it. 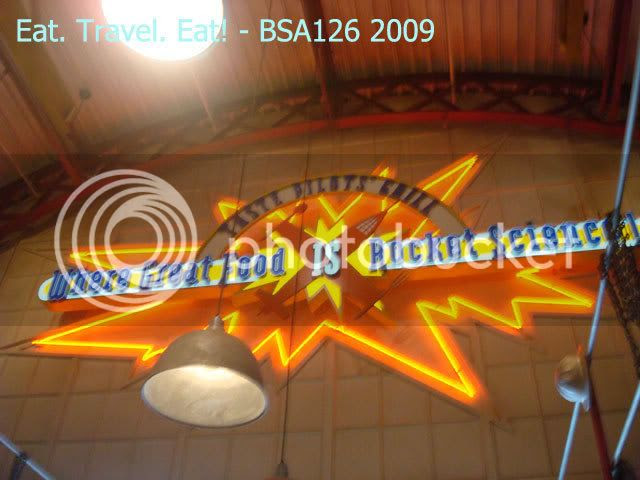 Update October 20, 2009: Commenter Stillness stated that Taste Pilots Grill does not offer the waffle fries anymore and the food has changed. Just wanted to let everyone know :)

noobcook said…
Your post makes me miss visiting california and theme parks, it's been almost two years since my last holiday. Thanks for visiting my blog =)
February 12, 2009

EatTravelEat said…
noobcook,
Thanks for visiting my blog too :). I haven't been to these theme parks either in a long time (even though I am only a hour away) and it was only until recently I went there. I'll post more on this theme park soon!
February 12, 2009

Amanda (Two Boos Who Eat) said…
I love California Adventure. My fiance and I love to eat at the place where you can get soup in a bread bowl. Yum.

Also in the Grand Californian, there is a nice restaurant called Napa Rose. If you ever get a chance to check it out, you will enjoy!
February 13, 2009

EatTravelEat said…
Amanda,
Thanks for the suggestion! Soup in a bread bowl is always good, and that would have been perfect on our day which we visited as it was raining hard!
February 13, 2009

Anonymous said…
i ate here before! it was alright. i love lots of pickles!
February 14, 2009

Yeah, they have a lot of pickles don't they? And you can take as much as you want! I saw people just eat the tomato slices by themselves.
February 14, 2009

OCnative said…
I ate here twice recently (annual pass holder) and they changed the fries! They are the same stock fries you can get all over the park and the burgers weren't charbroiled like they used to be. This used to be THE PLACE to eat for me and my friends, but now it's same old, same old. I asked about the waffle fries and they said they stopped making them. Bummer!
October 20, 2009

EatTravelEat said…
Stillness,
Must be some large cost cutting! After all, they could have gotten frozen waffle fries. Thanks for the update. I'll put your information in the post.
October 20, 2009