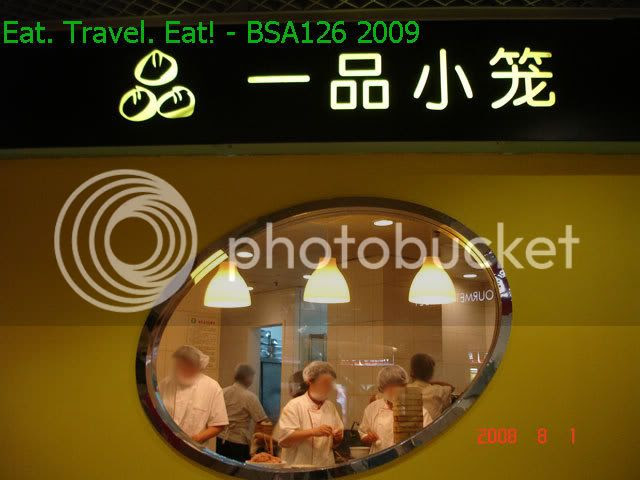 This place is almost hidden from everything at the Oriental Plaza at WangFuJing, which the Grand Hyatt Beijing is also connected to. But the xiao long bao here are just simply delicious!

We discovered this place two years ago by walking around, hungry for food. And so, we discovered this restaurant! It was not just relatively affordable (about 10-30 RMB for XLB), but it was almost to the fact addicting. Once you ate one XLB, you wanted to eat more!

If you love a good amount of soup in the XLB, this place won't disappoint. 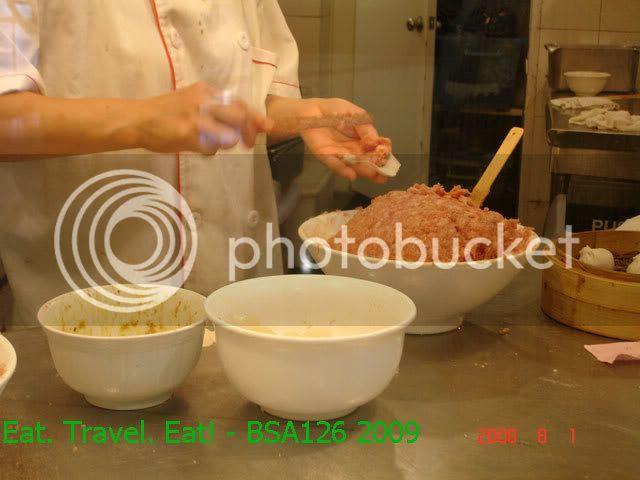 The circular window allows a great view of people making the different varieties of XLB they serve here. There are several, but none have any "crazy" ingredients. :)

Watching the window, I was able to see how they made their XLB's. First, they get a skin which has been rolled out by another worker. Then, using the wooden dowel (which the lady in the photo is doing), a dollop of the meat filling is added. A hole is then made, to house a gelatinous soup cube. After that, skillfully, the worker then makes the pleats by doing a slight inward and outward action, and then at the end, the dough is twisted as well as pushed so that everything is secure. The outcome? A very plump XLB, waiting to be steamed.

However, watching the window also showed some flaws. If a worker made a so-so XLB, that XLB would have to be thrown away! Poor meat, dough, time, and effort all gone to waste. They could have done a "Xiao Long Bao Stir Fry" by cooking the bad XLB's in a wok. 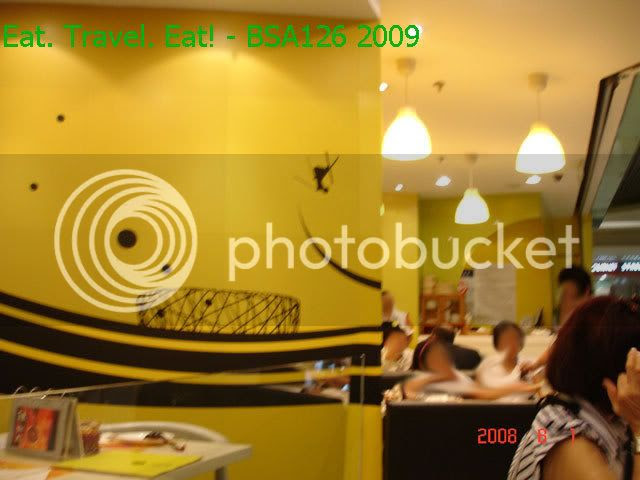 The interior is a very sharp taxi yellow and black and white. I don't mean Beijing's taxis but the taxis in the U.S. It's not everyday you see such a boldly colored restaurant! There are also paints of popular attractions in Beijing. In this photo, the center thing is the Birds Nest where parts of the Olympics were held.

Ordering was pretty SLOW. Yes, we ordered it early, and the first orders came in about 5-10 minutes. However, since we then loved the XLB's so much again, we ordered another steamer's worth. That wait was like the longest wait ever! Was it just us or was it them? We'll never know. They probably were made and cooked right on the spot, as at that time the workers were making the XLB's with fillings that were not for our order. 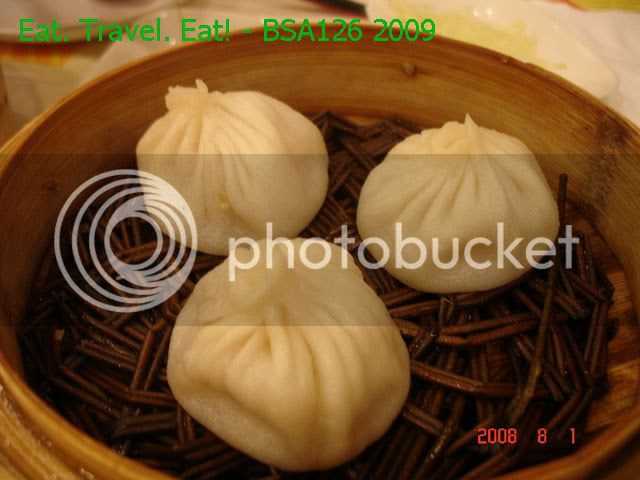 SHOCK! Why three? We were just trying them out. After all, we wanted to eat the XLB with only meat in it. Then what is this?

Being a dried scallop XLB this definitely had a good dried scallop flavor. You could even taste it in the soup broth that came along. This had a good spoonful, but not as much compared to the meat only XLB. 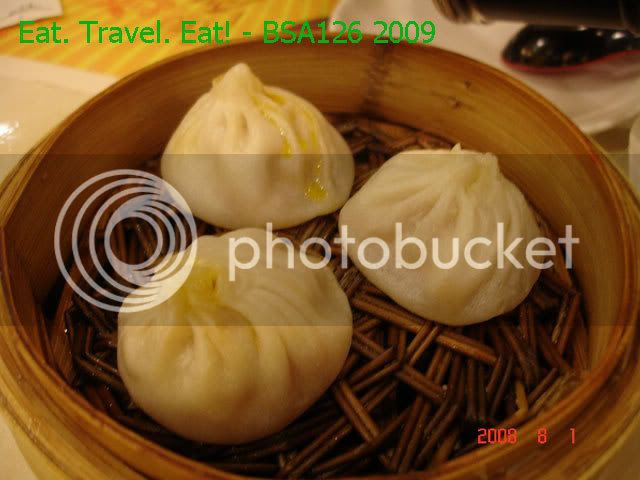 Next up was the crab and meat filled XLB's which we also ordered only 3. This had a very intense crab flavor as well as a good meat flavor. The soup broth in also had a lot of crab flavor. 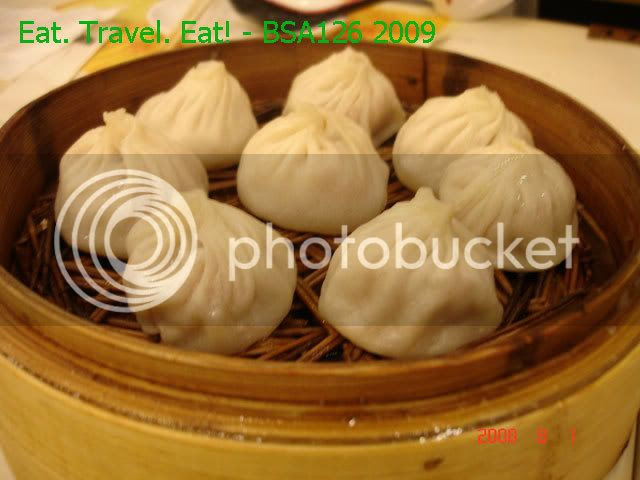 And this is the biggie. The meat only filled XLB's. We ordered it to come with 8, but if you aren't that hungry you can also just order 3. All of them can be ordered with 3 or 8. Obviously though, the ones with 8 are a better deal. We were just snacking. Or not so. One bite into this, and you could tell this was excellent! The dough is resilient and is not too thin (Din Tai Fung Dumpling House) nor too thick (Dumpling House), and it had that dough scent like Din Tai Fung.

Inside, there was a TON of juice. The meat broth even tasted slightly sweet too, which is a sign that you can only get when the pork is really fresh. And the meat was very tender and savory. Mmm. And so, we ordered a second batch.

Total for the check was about 80RMB. A pretty good deal for what it came with, although some places may be even cheaper! But alas, it is cheaper than in CA, where sometimes even several potstickers can cost 20 dollars (Las Vegas).

We also once ordered take out here, and it is so interesting on how they package their item for take out. For me, I would say it wastes a LOT of the resources as for every three XLB, they use one plastic container which is almost like a small bowl which you could store ingredients in. Just imagine how many bags it would take for four orders of 8 XLB!

They even have special containers for the ginger and the vinegar, which they fill it up for you right on the spot! Ginger is put into small, dainty plastic bags, and the vinegar is carefully poured into a plastic container. Lots of prepwork!

Oh, and still, the XLB tasted great, even after 20 minutes of handling from walking.

So far, the best xlb that I've eaten is from Din Tai Fung :)

food makes me happy said…
How interesting!
I was just craving for those dishes earlier today!
February 04, 2009

Cindy,
How interesting here too!
I just had the thought of making this post just this evening; nothing, other than taking the photos, was done before this evening.
February 04, 2009

shavedicesundays said…
When I saw that first photo, first thing I thought of was DTF, except they have hispanic people making the dumplings.
February 06, 2009

There are some differences though from DTF and this place :). Such as they use a bamboo steamer instead of metal (but DTF does use bamboo at special times). And the layout of the kitchen is different.

Sometimes the manager also makes the dumplings at DTF, as well as other workers that aren't hispanic.