March 15, 2009
There are many different car events in the world. Some are just for show, like the Auto Shows all over the world. Some allow you to eat, meet, and see. This was one of those special events where you look, meet people, and eat. And eat very expensive food. You should never miss out on these types of events- after all, it is free, and you get so much back in return, whether it be a gift (which is well, the most ultimate as you keep something!), food, great atmosphere, or more.

This Audi and Porsche event was at Rusnak Pasadena on Thursday, March 12. Anyone reading that was there ? :)

Driving was a bit long to come here, but as we entered the driveway, employees at Rusnak were welcoming us and telling us where to park. It seemed like most of the attention was at the Porsche event. However, we were going to the Audi event...but it actually didn't matter! People actually were running around both places and looking at what was to see. There was though, many differences among Audi and Porsche- and that doesn't include cars in the situation... 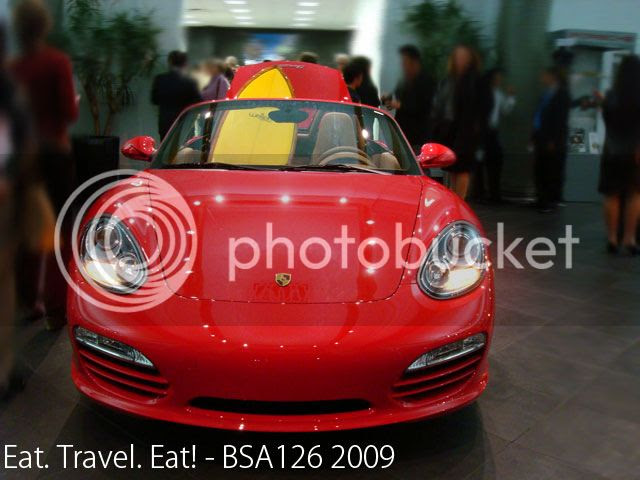 If one entered via the front door, you would meet this. A very red 2009 Boxster S, dressed up with a surfboard. Did you know other companies beside Porsche and Audi were also promoting their businesses in both of the 2 "events" that day? Billy's Board Shop was there, doing advertisements and bringing models that were clad in board shorts and clothing from popular boardriding companies. It seemed as if they were trying to show the different uses of a Porsche, and the Porsche's "use" was for surfboarding. Interesting...

The board shop people were also at Audi too. More on that later.

But what other company was there? Scarlet Tea Room was. And at the front, there was unlimited, free champagne, S. Pellegrino water, and bottles of water. 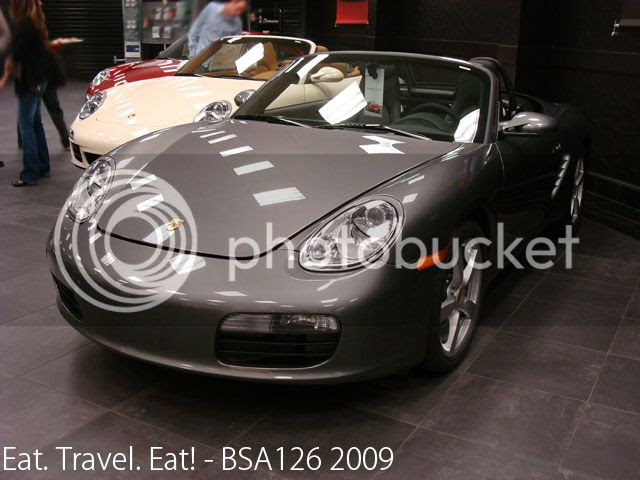 But what if you entered from the side entrance which they move their cars into the showroom from, like we did? The first car you would see would be this- a 2009 Boxster, but in a not so bright, but still very beautiful silver. In the back of the Boxster was a Cayman and a 911 (which had a red tag on it...), and there were even more expensive models running up to 150,000 dollars in the back. Whoa. 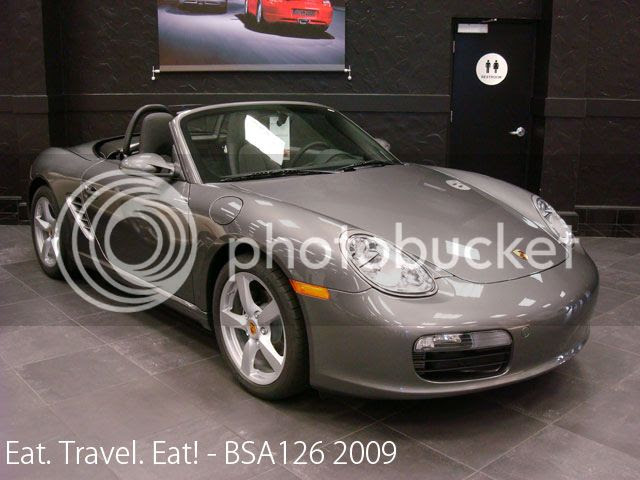 The Boxster that was displayed here was actually the least expensive of the bunch shown at the event today. And of course, we sat in it and tapped on stuff; it was actually "basic", with very little options, and no GPS even for a car that cost 55 thousand.

So...the start was something easy and basic. But what will come soon? Of course, something much more intriguing than every other car, even if those cars cost 100 thousand and more. 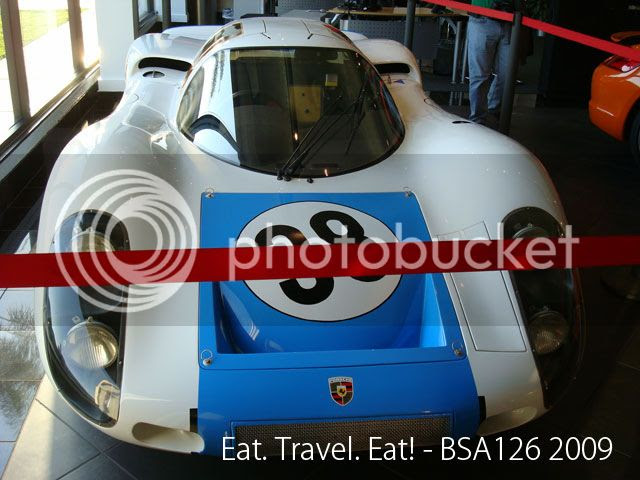 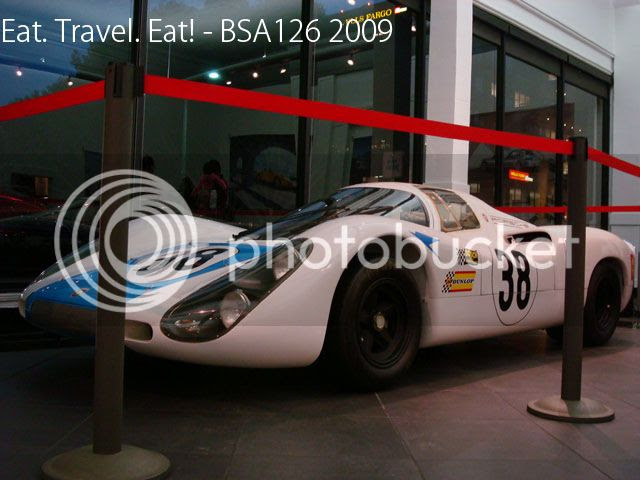 Look at this car, that is actually more than 40 years old, yet still looks in a great condition! The details, details! Stickers, placards, and the paint have not faded at all. Lots of tender loving care was given to this car. And yet, it isn't a fake model or anything. Someone actually owns this car; they contributed the car for show (probably just for today's event). 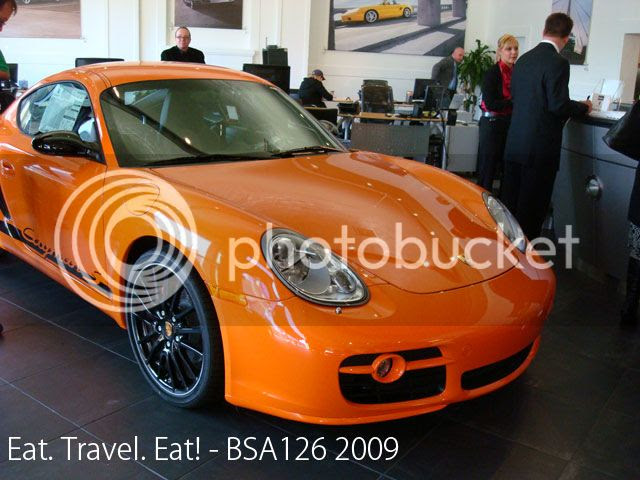 And of course, there were also other models too, like this very orange and black Cayman S, which was right next to the DJ in the back. The music? Kind of loud, but he didn't edit/change up the songs much like some DJ's do.

As we were looking around, a sales guy came, and actually talked to us for the whole time we were there. The starting point was about the Boxster, but later on it turned into a more developed conversation.

For some reason, people seemed to think we were going to be a good customer! Even a person from Scarlet Tea room specially gave us an ad on their place at the time. More on that...after we visit... 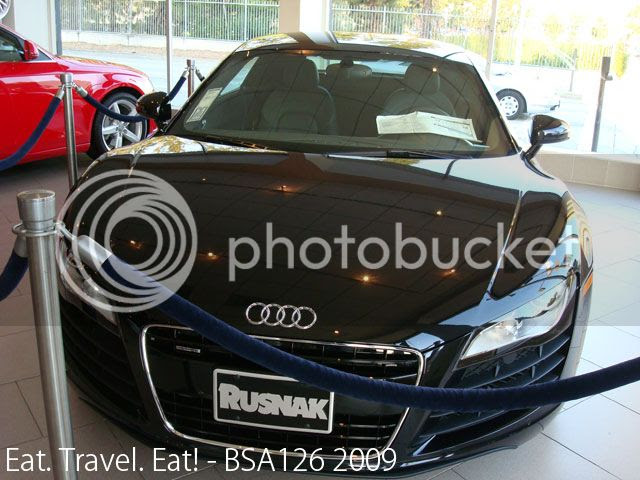 (An Audi R8, off limits to touch and enter)

Audi, of course! Entering the showroom though, it felt noticeably...quieter. It almost seemed as there was no event. But, there was. 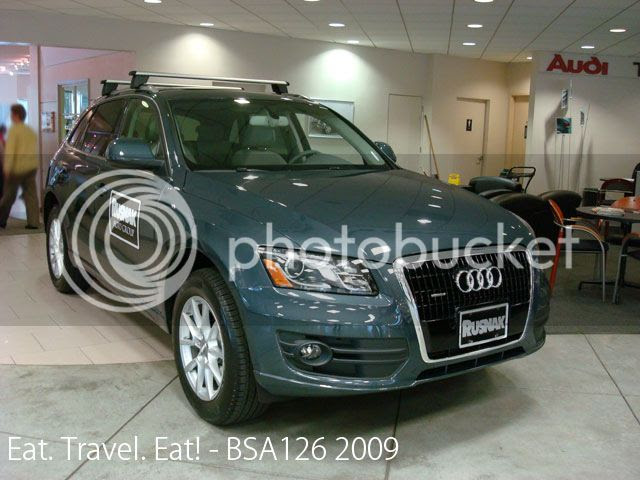 We entered via the back (again), to the pre owned showroom area, and a Q5 greeted us at the door. Only one Q5, you ask (the event's focus is the Q5)? Well...there were 3+ Q5s in the main showroom. 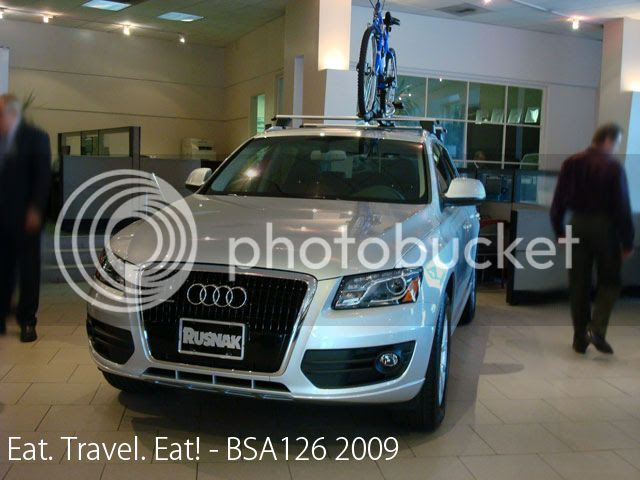 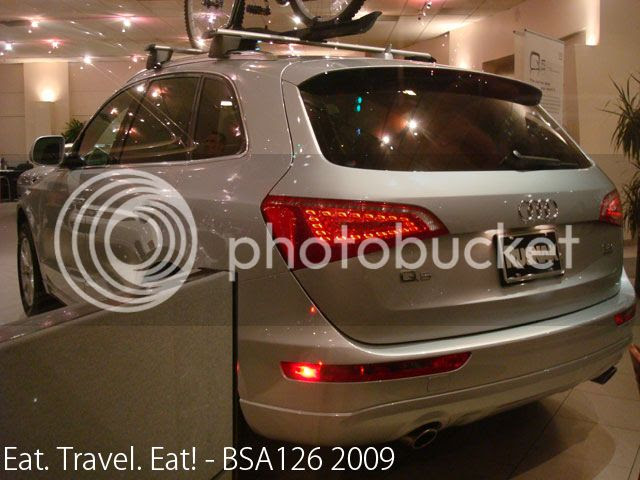 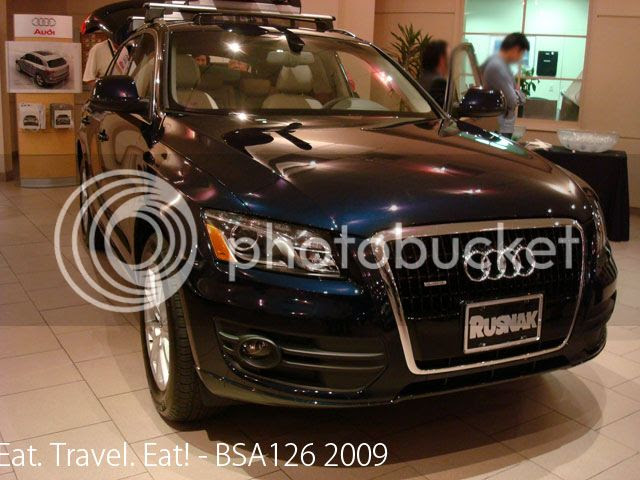 There were Q5's of different price ranges and colors. Some cost 38 thousand, while others cost almost 50 thousand. Of course, the features were different. I toyed around with the MMI and it was well, interesting. A bit confusing to use as there are so many buttons, but it probably would get easier after some practicing.

Other cars didn't have the full MMI set but rather a simple knob with four corners on the dash area (not near the armrest), but I didn't touch those...

By the way...did you see the bikes in the photo on top of the Q5? Again, those were from Billy's Board Shop. There were people trying to say that the Q5 was perfect for snowboarding, but it looked like they left pretty fast. When we visited again near the end of the event, they were gone, while the Porsche people were still there. 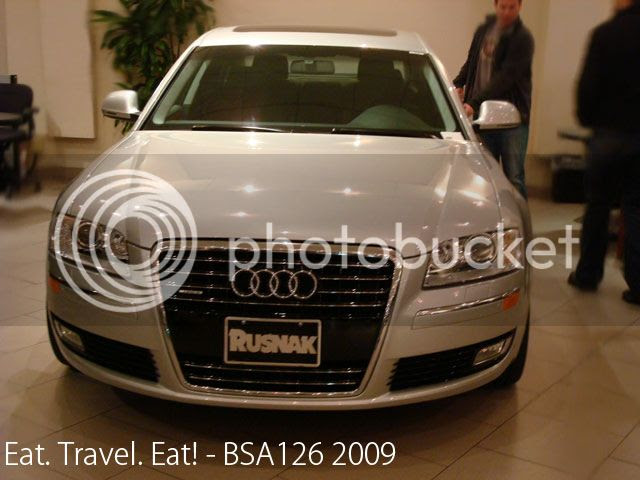 And of course, there were also other cars, like the A8 shown here, as well as a S5, A4, and the R8 already shown to you. The A8 seemed to be for some reason pretty popular. Maybe it is because it had a great space for showing it off- plus, there was a special colored leather which was unusual. A dark brown leather isn't that common in cars these days anymore.

And of course, other than cars, there was food! Both Audi and Porsche had food from Scarlet Tea Room, but there was a special spot in Porsche's showroom where they prepared the food. Who was better in the end? I'll say Porsche. There was more drinks flowing around (champagne was even given out on the tray and not at the table, but Audi didn't even have champagne), and there was more food coming out. At Audi, food stopped coming out near the end of the event, but at Porsche, food was still there.

What food? Take a look at this. 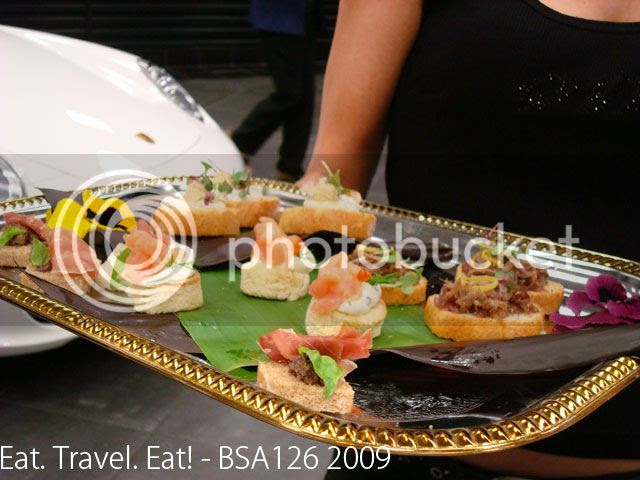 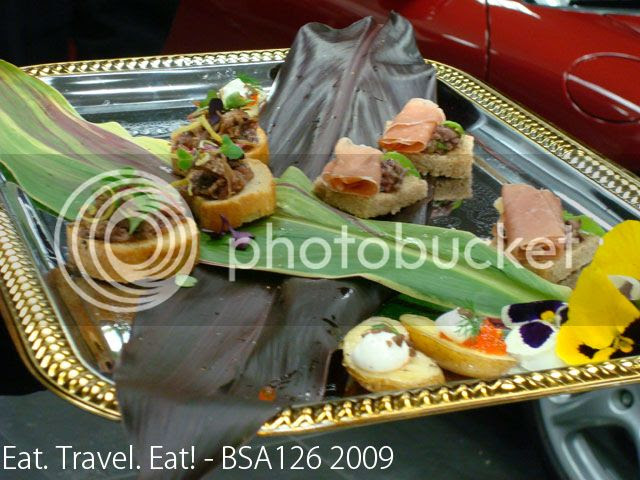 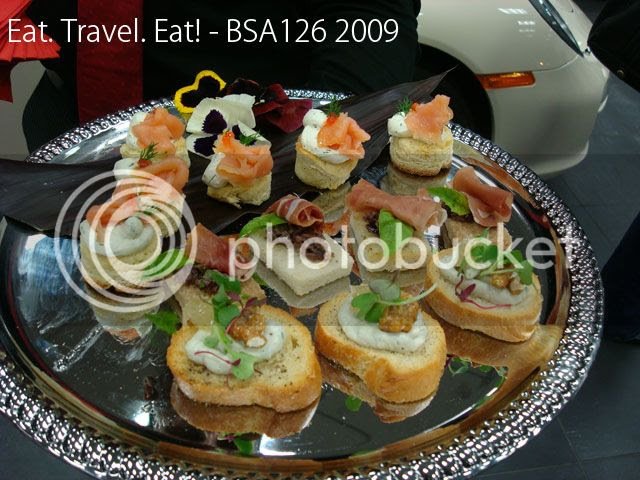 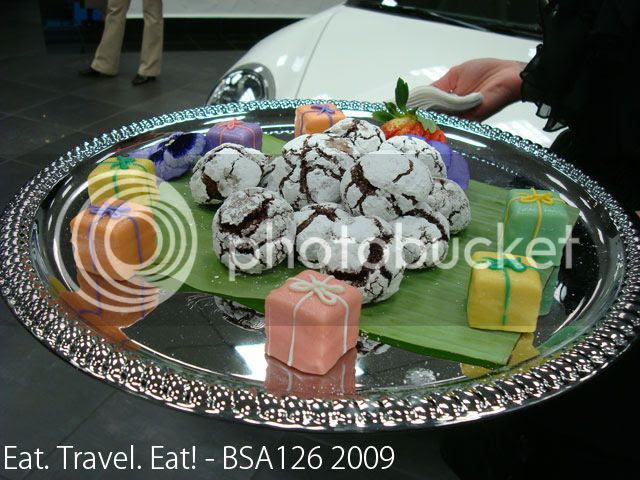 Aren't they just so cute? There were both savory and sweet items. The savory items included duck confit, prosciutto with a olive tapenade, smoked salmon with dill and cream cheese, roasted potatoes with roe and a special salt (grayish brown color, and the servers didn't specify), , and also something with brie and a whitish syrup that tasted a bit weird for our tastebuds. I personally liked the duck confit and the smoked salmon the best, as both were flavorful and didn't taste weird to me. Roasted potatoes also were good, but they added lots of the salt which had a very deep flavor. Also, the potatoes didn't come out as often, and they were oily.

Desserts? 2 things- a chocolate macaroon which was pillowy , soft on the inside, and lightly crispy on the outside with a dusting of powdered sugar, and small mini presents that came in 3 different flavors, including chocolate, lemon, and another flavor (I think raspberry). Both tasted great, I have to say! We grabbed a lot of the chocolate macaroons as they were really good. But if you weren't careful, the powdered sugar would get onto your clothes- not good especially at a event like this :).

What can I say? Unlimited high quality food for free, and a great opportunity to look at cars. What more can you ask for something that is free??? :)

---
*This is the 75th post on Eat. Travel. Eat! Thought of doing something special for the 75th post so I bumped this up from everything else in the queue :).

rmSOR said…
This comment has been removed by a blog administrator.
March 16, 2009

EatTravelEat said…
Selba,
Thanks! Honda is nice and they product some really nice cars, but I find their system thing for some of the new cars to be pretty intimidating :) with all those buttons and controllers.

rmSOR,
Sorry, no ads/links please to things not related to the blog or subject :). I'm sure you probably didn't do it on purpose, but anyway...
March 16, 2009

EatTravelEat said…
Amanda,
Thanks! Those chocolate macaroons were fantastic. Whenever we saw a dessert tray come by we would get one to eat. :) Probably very high in calories!
March 16, 2009

EatTravelEat said…
tigerfish,
Should have put the food part in the middle :). I'll do that next time for events, or put it ahead!
March 20, 2009