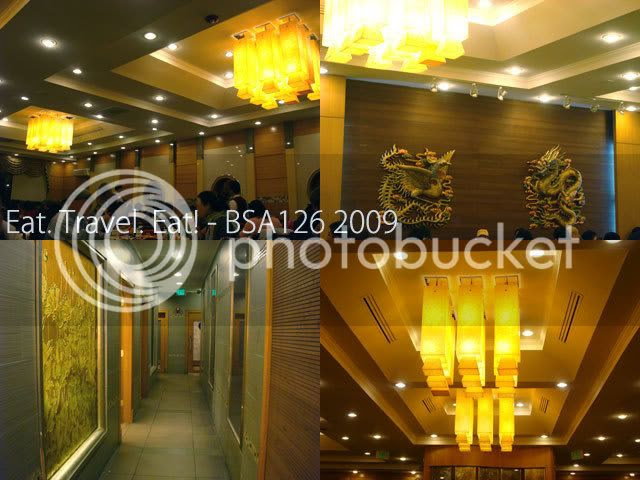 EDIT May 13, 2011: Blue Ocean Seafood Restaurant has been tragically burnt down from a fire on Thursday, May 12 that quickly spread throughout the restaurant from the kitchen. Investigations are still going on as to the cause of the fire. Hoping for a smooth recovery!

A used to be old favorite restaurant switched owners. And so, it became this: Blue Ocean Seafood Restaurant. The outcome of the renovation, as you can see, is very modern. Pretty much completely different than what the old restaurant used to be. The lighting is very yellow, and so that was not good for taking photos for the blog! I had to edit almost every picture in order for the items to look like the way they did during the meal.

What stayed though from the old restaurant, was this fishtank, which doesn't angle and is flat on the wall. I made the angle due to the fact I wanted to combine both photos together.

But how about the food and service? Is it still good? Well, being basically a chain from the New Capital Seafood Restaurant (which has a location in San Gabriel as well as other locations), you can pretty much expect the food to be good. And for the most part, it was. Service? Not so great. We waited for more than 30 minutes for all these dishes below on our last visit. At times though, it is fairly well. 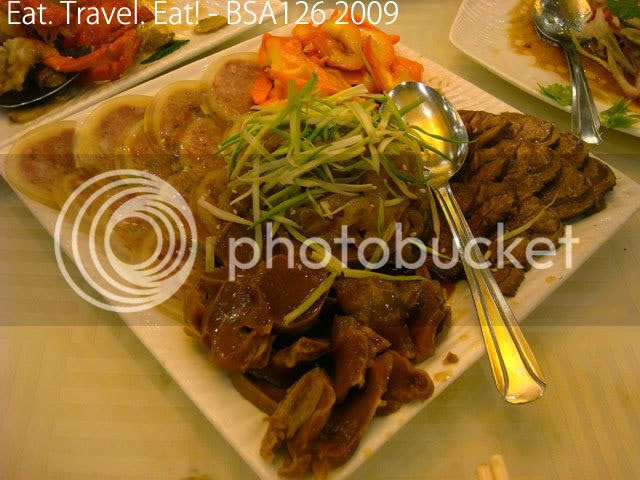 What is this nicely displayed platter of meats? Well, it is a cold meat platter with many different cold items, including jellyfish, meatloaf, gizzard, seafood, and beef. The orange colored thing in the back is actually the seafood. If I remember correctly that is squid. Certainly looks like it was colored! The quality of this was just okay. You can tell that the jellyfish was from a supermarket vacuum packed package (tastes like it). But the two items to the right were both good. 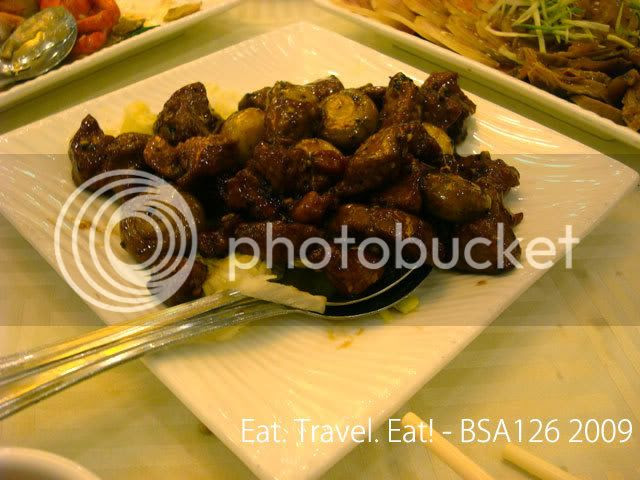 We also ordered the French Style beef, which was actually disappointing. Some of the pieces were tender, while some were very hard to chew. The mushrooms were nothing special but were fresh, and the sauce was like any other restaurant. I would not order this dish here. I'd rather eat it at restaurants like May Mei in Arcadia or Hop Li in Arcadia which can make it properly. 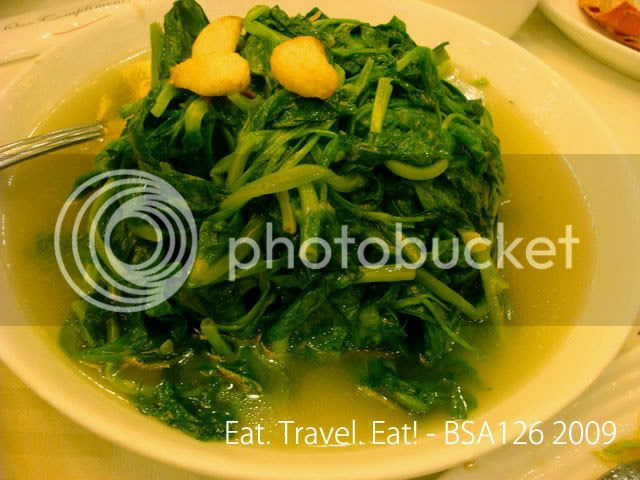 Something good? Well, this mound of peatip with a broth surrounding it is great. The peatips are cooked nicely and are lightly crisp, and the broth tastes great, and there is a lot of it! Some say though that the broth can be MSG... 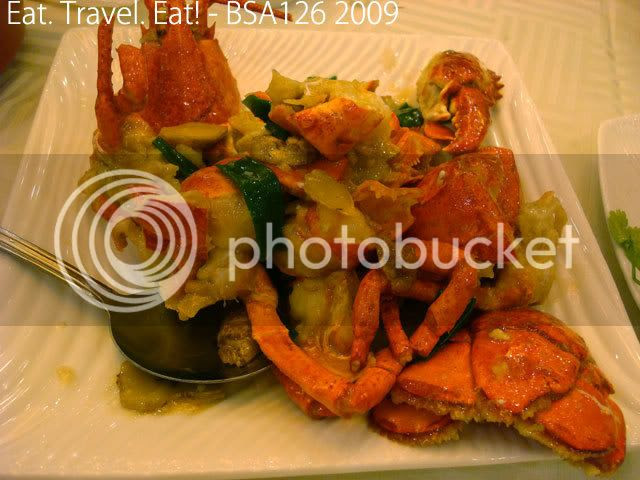 Green onion and Ginger Lobster comes free if you order at least 30 dollars amount of food. You could also get things like scallops with noodles, which in our opinion isn't as great of a deal. And look at the size! It was an entire lobster and it was cooked well. The lobster was flavorful and wasn't overpowered by the ingredients, and the sauce that it was stir fried is good with rice and has some lobster flavor in it. A great dish to have for free :). 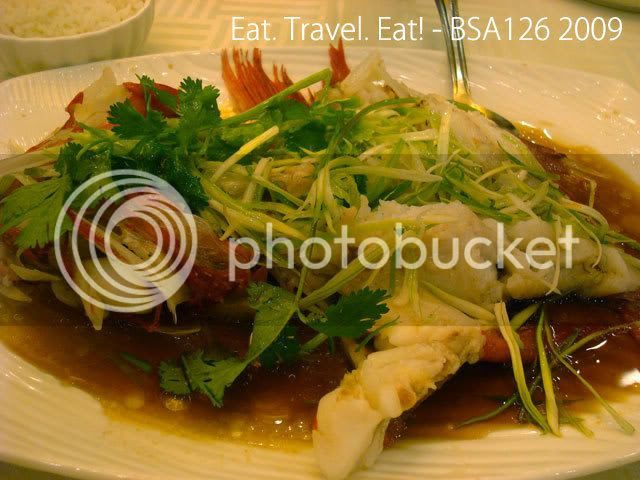 Fish though here is not as great. It tasted fresh and everything, tender but also firm, but one friend had the eye and they could tell that this fish wasn't fresh. Boo! Embassy Kitchen makes a better steamed red cod than here then. We've found there to have the freshest and well cooked fish there out of many restaurants in the area.

Also, it arrived first. How weird! And also, it was cut into pieces- it was not an entire fish. I wonder why they did that.

As usual though, I liked the fish soy sauce and the green onions. Those green onions are not easy to slice to look like that, you know? It takes some skill in order to do that nice thin cut. 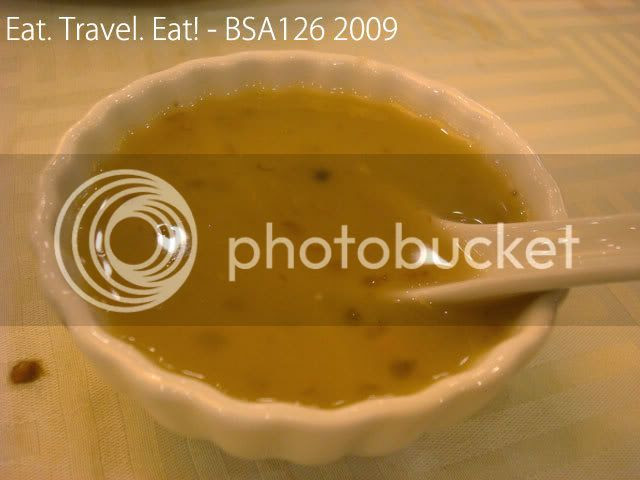 Dinner meals also end with a small bowl of tapioca and mung bean sweet dessert soup which is delicious as usual.

For some reason, Yelp also rates it very poorly. Hmm...another restaurant in Alhambra that I like but gets not so great reviews on Yelp!

foodbin said…
i think the purpose of cutting the fish is to get it evenly cooked and easy for the diner to get to the flesh.
March 05, 2009

Thanks again for another tag! :)

I think that probably is why, or if it was too long for the dish and couldn't fit it into the dish if it wasn't cut.
March 05, 2009