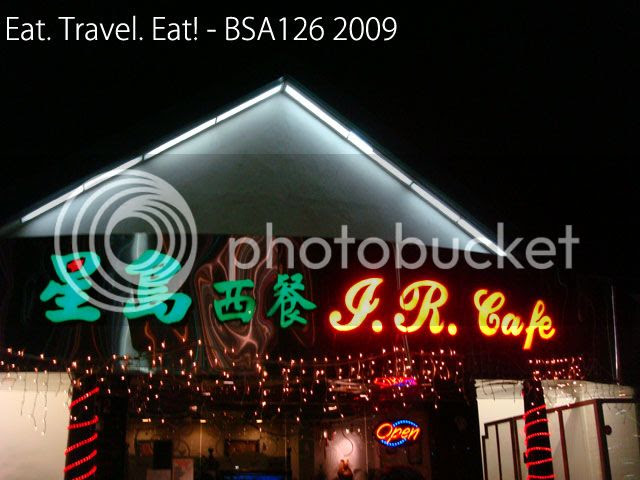 What a busy 2 weeks it was for me :). Lots of big things happening. Such as finding someone's wallet at Fresh and Easy last week, getting an offer to become Destination Expert on Tripadvisor, the biggest shopping spree we ever had at Fresh and Easy, the first time for me to shop with a shopping list for a event, and many many more other events. Hence, the less posts I have done these weeks! But let's get back onto schedule and well, start posting again.

There are many HK style cafes in Southern California, and this JR Cafe is yet another one. We've actually been to this place also for many years (more than 6), and have seen it change in ownership and logos/text. I wrote a "report" on this exact place as a district writing assignment 5 years ago. After all this time though, it's still a great restaurant to eat at :).

We've tried many items, and many of their complimentary soups that comes with any meal. But of course, I didn't start taking photos 5 years ago :). So, here are some great dishes we've had from 2 visits- the photos which have a bolder, older font that I used is from the first visit, and the one in the newer text which I use now is the most recent visit. 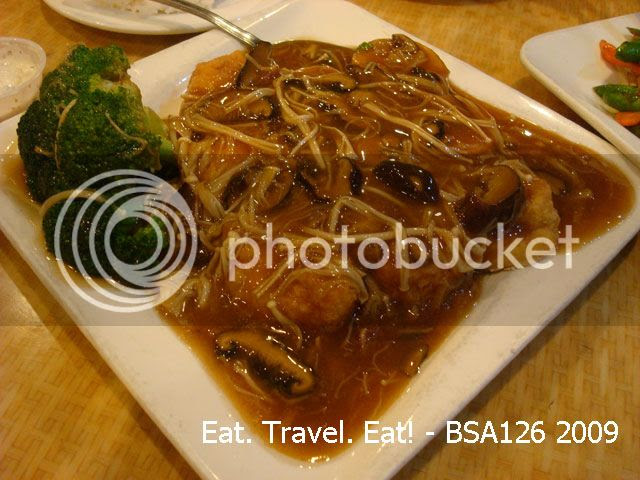 New found favorite this year? Fried tofu with mixed mushrooms and dried scallops. This is just YUMMY. A very crisp and thin coating is on the fried tofu which is just delicious, and inside, the tofu is silky, lightly eggy, and tender. On the outside, a rich and flavorful brown sauce covers the entire dish, and mushrooms are aplenty with a very concentrated mushroom flavor. Mmm... 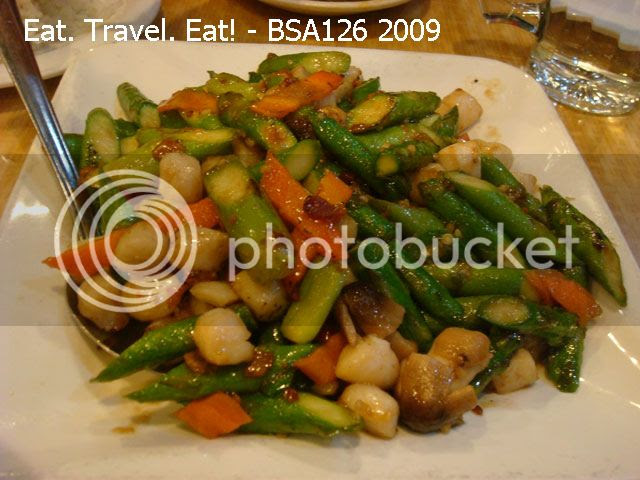 Another dish to like is this scallop dish with many veggies. We weren't expecting that much scallop, but guess what? We were wrong. This had tons of scallops, unlike Blue Ocean's version of the dish. And all the veggies were flavorful, crisp, and yummy. 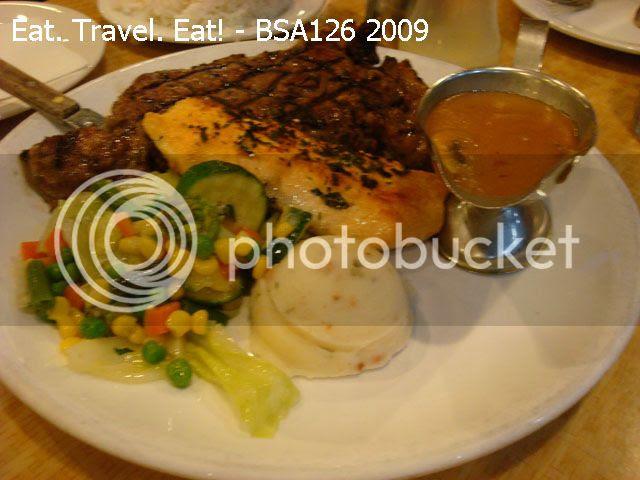 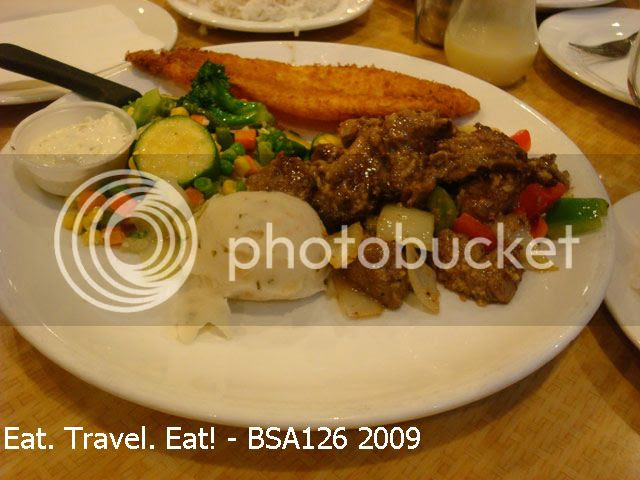 Another mix that JR Cafe does is lots of surf and turf or steak plates. These are just a few, but both of these were pretty good. They know how to cook their meat :). For the few times, our meat came a little rare than we wanted to. However, when we asked them to cook it again so it would be more done than before, the meat always came out just the way we wanted; tender, not bloody, flavorful, and never dry. Mmm... No, the veggies and mashed potatoes are nothing special though, but the meat is certainly yummy. The fried fish though in one of the photos isn't that special :). 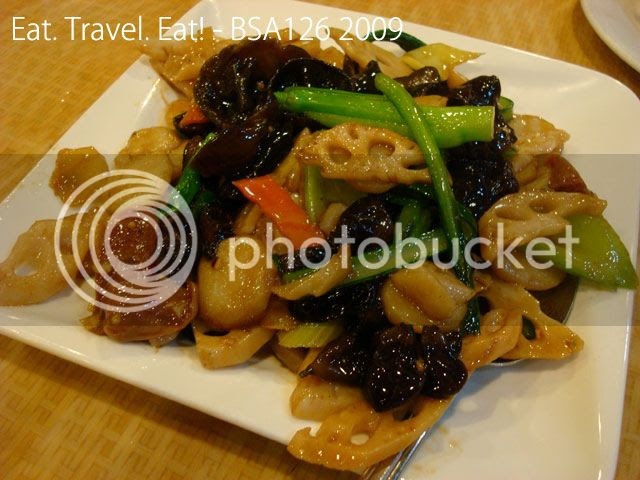 I've had several _________(restaurant) specialty dishes, also called "xiu chao wong". This one though, is the only one that didn't have loads of meat! Instead, this was lightly flavored with lots of lotus root, black fungus, carrots, celery, gai-lan, water chestnuts, and chinese sausage. I was expecting more meat such as shrimp paste, scallops, and chicken which I had at Garden Cafe last year, but this was nice to have :). A different change from the ordinary. 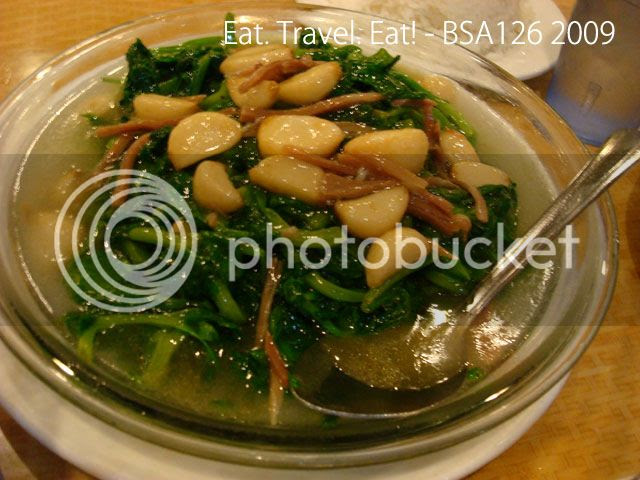 Whoa! So much sauce. So much garlic. What is this? Peatips in "supreme soup". These were okay, but a bit bland. The smoked ham though on top added plenty of salty flavor though! 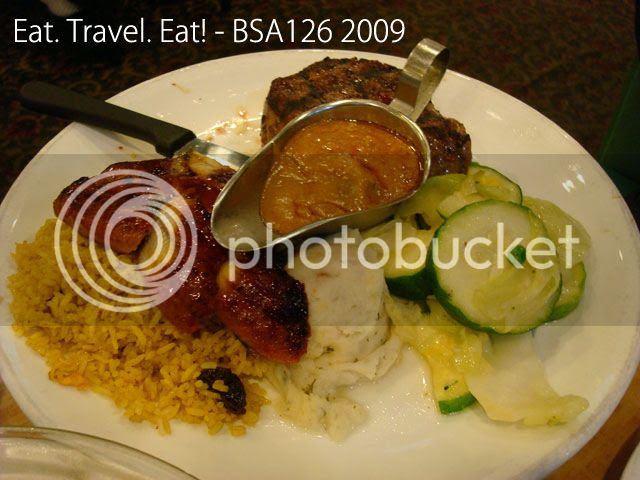 And we end, with another steak and seafood plate. This though, was pretty good, but the eel wasn't. It was lightly bitter and had a weird taste. Sigh. The meat was good though, even though we had to ask them to cook it again as with the first cut, tons of bloody red juice came out!

What can I say about this place? Another pretty good place to eat. Some other dishes I've liked include the egg white with dried scallop fried rice and the minced meat rice (although May Mei is still the best for that).

It's also interesting that one of my friends know the owners of this place. Hmm...