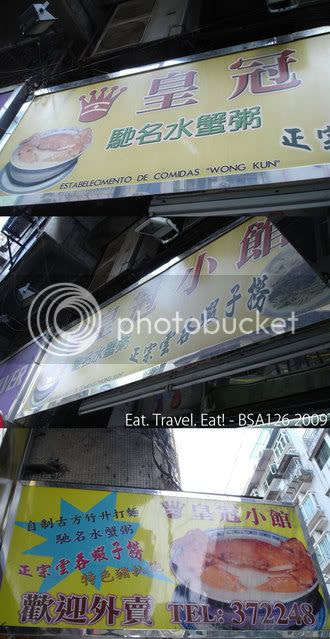 What do we see in the big 3 banners above? Well, I see a big crab on congee, and a bowl of wonton noodles. Which is exactly what we came here for. Our friend brought us here just for the wonton noodles, which she seemed to like very much, although she called the price expensive for about 20-30 patacas. And, if you are interested in the alphabets on the bottom, it reads Estabelecimento De Comidas "Wong Kun". Probably the Portuguese language there. And the Chinese translation would be "Crown Restaurant".

This place is actually pretty famous. Many awards and newspaper places have talked about it. They also are featured in the Macau Tourist Guide, and the ad there says they also use the huge bamboo stick to pound their noodles. Interesting, isn't it? If you have seen Anthony Bourdain's Hong Kong episode, he called the bamboo stick technique "disappearing". It seems like it! The bamboo pounding also gives the noodles a very special and delicious texture. We'll see if it is (it did...). 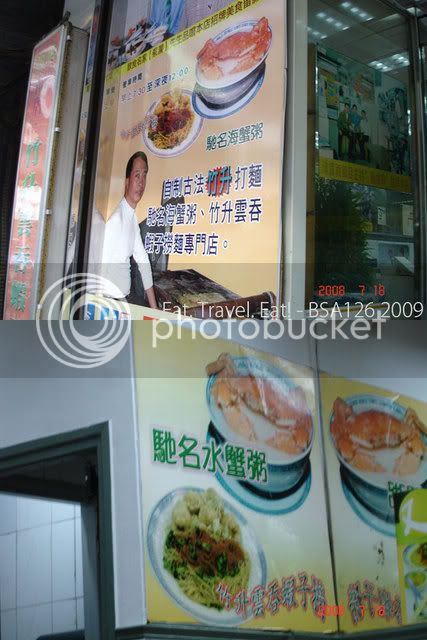 Signs in and out of the restaurant reassure us we had come to the right place. Look at all those wonton noodles and crab congee there. Doesn't it make your mouth water?

The interior? Not fancy at all. Lots of whites, and the tables are simple. It's a pretty simple place. 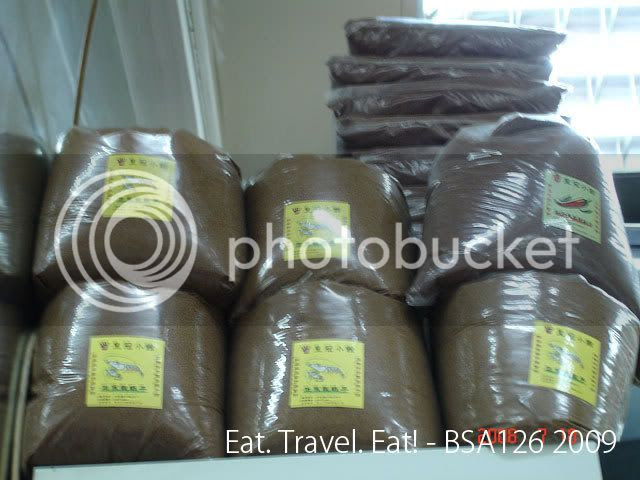 As we sit down, we notice this- tons of bags filled with brown stuff. What is it? Well, it's actually dried shrimp eggs, if you can see the sign on each bag. Hmm...interesting. It also seems like we will be eating some of this stuff later. Hint hint. Did you see that wonton noodle pic?

Right after we sit down and talk, the waiter/ probably owner of the place comes to greet us. She knows our friend who is also a local, and we exchange greetings. The owner makes sure also that we will be well fed. Service is definitely friendly this time! 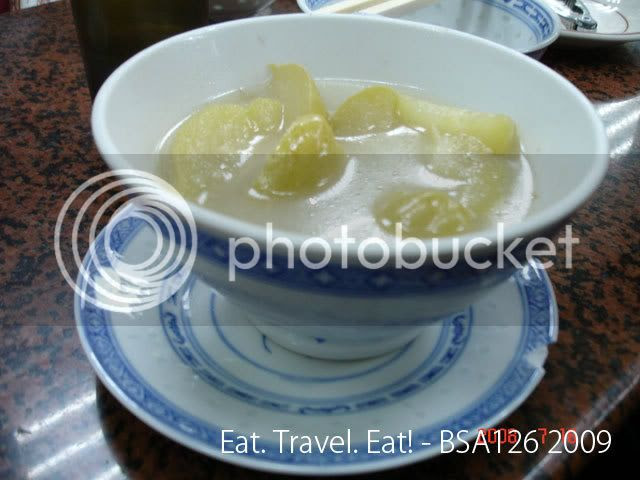 So, after some chatting, there came a bowl of soup. With so much of the veggie, it was very flavorful and tasty. Also a very good deal too...if I remember correctly it was about 5 patacas. 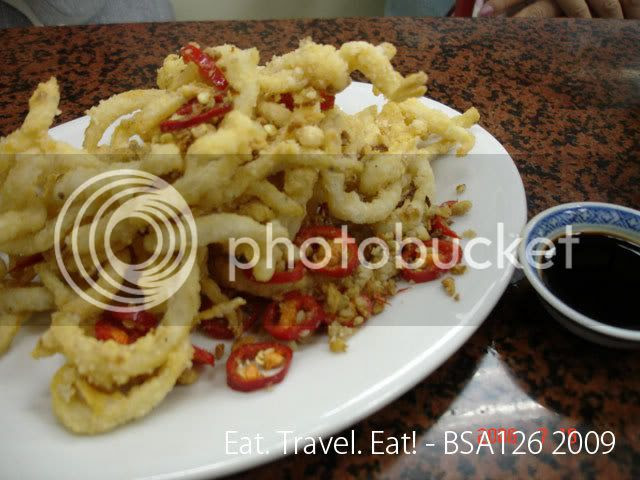 Next, a sizzling plate of fried silverfish came. These were addicting, and taste better than french fries! The outside was crisp, garlic-y, spicy, and slightly salty. And the inside was slightly meaty with a fresh fish flavor. They are pretty much good by themselves.

Those fried garlic pieces as well as the pepper also alone tasted delicious too :). 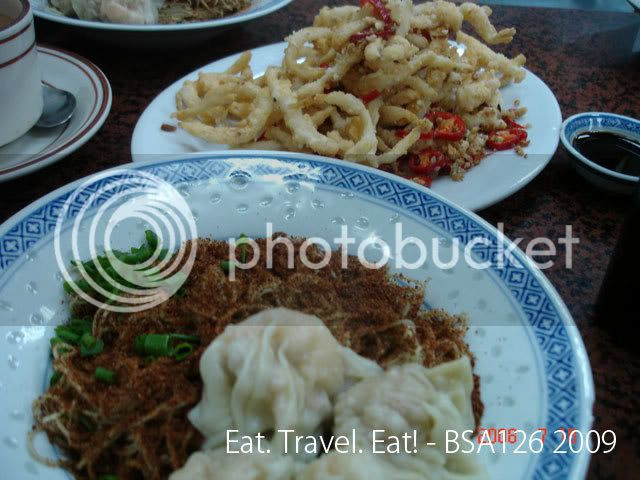 After a while of munching the silverfish, something came. That is, one of the hugely advertised items. Hint hint. Look near the bottom of the photo. What is it??? 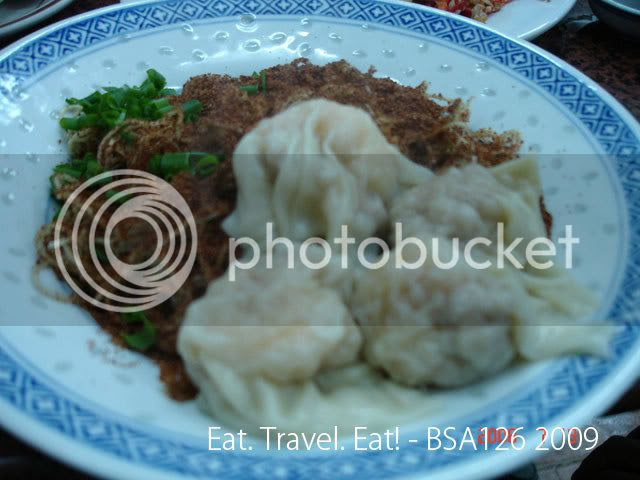 It's the famous wonton noodle that was pounded with the bamboo stick and some of the dried shrimp roe which you saw in those bags. A bowl of clear soup was also served along side of this. This well, was definitely wonderful. The noodles were really, just special! They were thin, bouncy, and lightly chewy. In addition, they were also cooked properly- not hard, or too soft. These were truly excellent. And the shrimp roe, with some moisturizing with some of the broth, was flavorful and shrimpy. Those 4 wontons were also very flavorful and freshly made. Mmm. And just when you thought this meal was over... 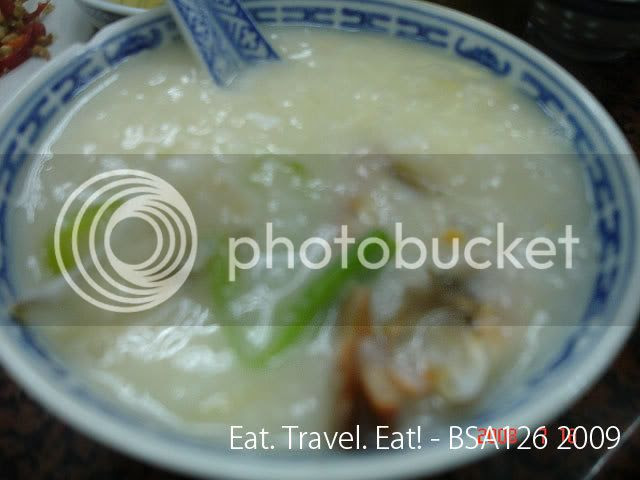 My personal bowl of crab porridge. Sorry for the bluriness.

Well, I was eating for a while. I never saw the big bowl's contents just yet. So, when I went for a refill of the porridge, I saw something that well, amazed me. Just look at all the crab used for the porridge! Wow! 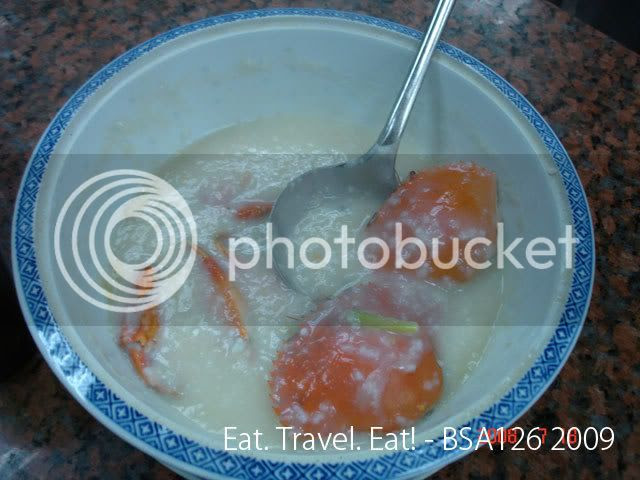 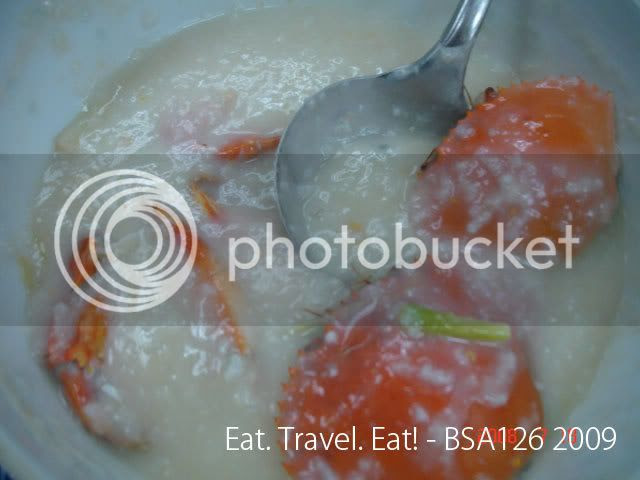 Two entire crab cooked just for a big bowl of porridge? You are kidding me. No wonder why this porridge was just so flavorful with the crab flavors all over. Lots of effort there!

Well, definitely a great experience having a meal here. It was a great recommendation made by our friend, and I think it is definitely worth a revisit next time we visit Macau!

EatTravelEat said…
shavedicesundays,
It's not very often one sees shrimp eggs! And here it's served as is as just a hefty sprinkle :)
Embassy Kitchen has a dish that has some of the shrimp roe, but you don't feel that much texture compared to eating these wonton noodles! It wasn't until this place where I got to taste dried shrimp eggs basically by themselves...
March 10, 2009

Hope you will be able to find it! They seem to always be in the tourist guide as they gave us a tourist guide with their business card stapled to the page of their ad at the end of our visit...
March 10, 2009

Anonymous said…
You guys rock! So fun to do all this traveling and eating : ).

The food looks good. Lots of new stuff for me to look forward to, especially those silverfish fries... que interesante!
March 11, 2009

EatTravelEat said…
Jules,
Thanks! I should do more posts on international places. Only problem is that some of them are blurry or look really weird. Guess I can edit it to look normal though!
March 12, 2009

elmomonster said…
Wow. I mean wow! I didn't even know shrimp had roe...and to have it in a dish? Amazing...just shows how much we DON'T have in the States!

Shrimp does have roe :), but no one basically talks about it here in the US! Thus, many of us do not know about it. :( All I've seen available in the US (or have eaten here in CA) are sea cucumber with shrimp roe (mainly available in Shanghainese restaurants) and fried tofu with bamboo pith and shrimp roe (Embassy Kitchen/ Embassy Chinese Restaurant). Those dishes too are more on the expensive side- 10-15 bucks(the fried tofu with shrimp roe at Embassy, which I have a post on) to 30 bucks (the sea cucumber with shrimp roe- in Arcadia Chang's Garden has it)
March 13, 2009