A Day at Costco: Frozen Yogurt! 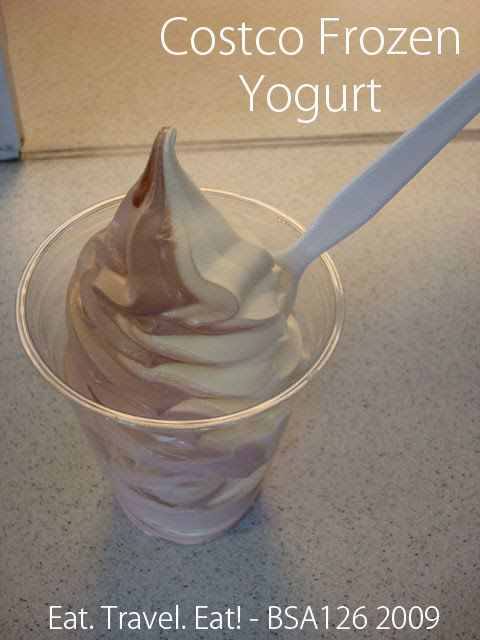 Costco is a place for many good deals. And if you haven't read the March's Costco Connection yet, there was a special article on Costco's food court, which has many very reasonably priced items (such as a hot dog combo for 1.50). (Read page 21 for the article). And so, being a very warm weekend in California recently, we decided to hit the Food Court to get frozen yogurt, which we haven't gotten in a VERY long time at Costco (kind of an afterthought for us as it's all the way to the side of the menu and we can't see it!). And many other people were just like us on that day- getting their fill on the frozen treat.

While waiting in the line, I was amazed by the soft serve machine. It pumped very quickly ( one of the Taylor models that you would find in Nubi Yogurt, but this one pumped especially fast), and what was even cooler was that since the machine would pump yogurt for a long time anyway, you could see how the yogurt would naturally twist in circles around the cup! It was very, very cool. The cashiers were also SLICK in making them. Some would not even look at the cup; they knew when it would be full and then would cap it off with a nice top. Some though, took their time and skill to make a beautiful, VERY large top (over the top of the cup by about 2 inches or so).

Our cashier was one of the people who would not look at the cup. And he gave us way less compared to one employee which filled the cup over the brim by about 2 inches. 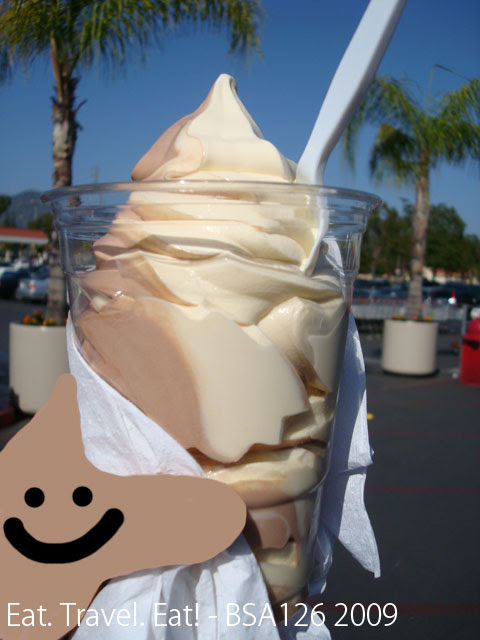 What? Less than normal? Look at that size of the cup (same cup size as for their Latte/Berry drinks) and how much yogurt there is already. At Yogurtland, that might have cost you 4 dollars (comparable size to their giant pink cup but slightly smaller- probably more than 4 dollars!). Here at Costco? A very, very affordable price of 1.35 (1.47 with CA tax). (and for the berry sundae, 1.65)

After eating the frozen yogurt, we were wondering how could this be nonfat when it was so creamy and rich! But, according to the sign at Costco's Food Court, they did use nonfat milk. So, we're happy about it. It's way cheaper than Yogurtland or any yogurt place (always a nice thing), and very good tasting too!

Yup they do now. I think they had it a long time ago too, but one doesn't see on the menu really easily. Had one of these frozen yogurts at least 3 years ago before eating it recently this year.

I agree! The texture and everything was very spot on, and it wasn't ultra ultra rich either.
April 06, 2009