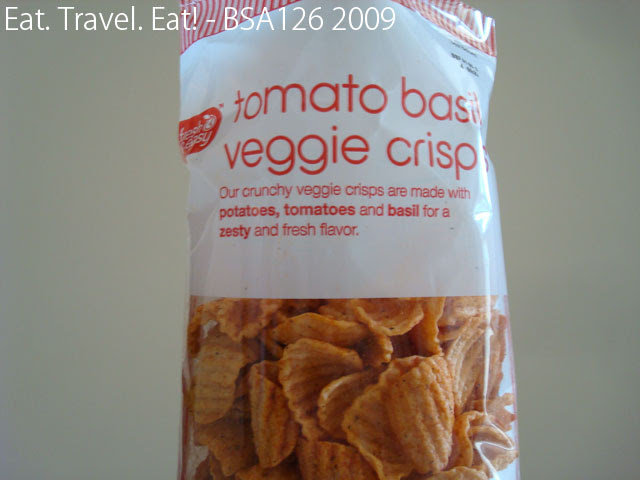 Last week, these crisps were available to sample at the Fresh and Easy "KitchenTable". And our whole entire party liked them. Well then, we got a bag of these chips. It cost 2.18 for a big but slender bag of these chips. An okay deal if you were talking to me!

What I like about this packaging though is that they show you the product already when you look at the bag. It's not some edited picture that covers up the bag; instead it is the real product right in front of your eyes! 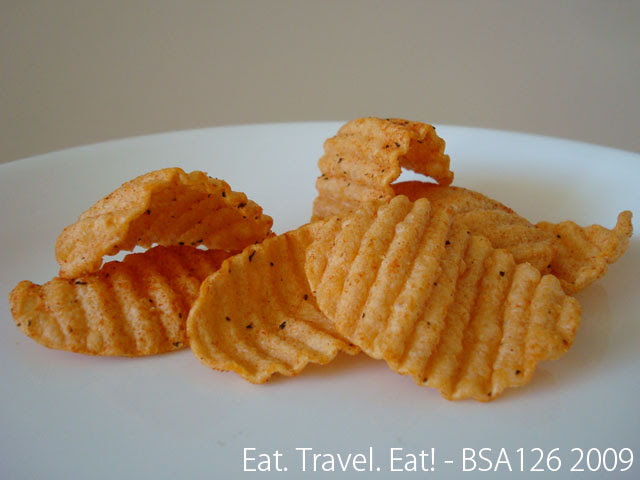 I finally found a good spot to take photos of food!
The taste of these obviously were fantastic. Tomatoey and a bit spicy with the black pepper. There was also a hint of basil flavor. Good texture in this potato chip actually- very light and crispy, not not thin. It kind of felt like eating the cassava crisps on Air New Zealand or the shrimp chips but more dense at a restaurant. This chip is a bit addicting. Once when you eat one, you want more. And there are several that are heavily seasoned- those are the best ones!

These veggie crisps also kind of reminded me of Calbee chips too. Their flavors seem to be pretty similar for some reason.

A friend of mine that ate this said it reminded them of spaghetti! They felt like they were eating spaghetti when eating the chip.

Best part though, was that these weren't oily! You would not get a oily residue onto your hands after eating them- at most it was a bit of the seasoning. Overall it's also a "healthier" snack for people who like chips. Only 130 calories for 1/6th of a bag, and there is no saturated fat unlike regular potato chips. The daily value for the fat content is also lower at 11 percent. Still high, but a bit less compared to your usual potato chip. You also get a bit of calcium and vitamin A, as well as plenty of iron by eating this snack.

I highly recommend it. :) UPDATE: And after 2 weeks, at least 8 entire boxes of the product has been sold at our local Fresh and Easy. Pretty popular item I guess! It's still available for tasting at the Arcadia Fresh and Easy as of 4-25-2009.

Nancy said…
Oh man...those kitchen table snacks really gets me every time. That's how the Hubs and I ended up with a humongous bag of spinach and artichoke chips from there. So good!
April 22, 2009

Spinach and artichoke chips? I haven't seen that yet at Fresh and Easy!
April 23, 2009

foodbin said…
the best part was no oily residue that often get us on our nerves-
did you feel thirsty?-
Sounds addictive- like groundnuts the more you eat the more flavorful it becomes.
April 24, 2009

Actually, I never felt thirsty! For some reason, as I continued to eat, the big flavor started to diminish just a bit. The heavily seasoned ones though were still very flavorful and packed a big punch!
April 25, 2009

noobcook said…
looks delicious. I wish I can find it in Singapore, but even if it's sold here, it will be really expensive hehe
April 27, 2009

Ooo...it would be interesting if it did get imported, as Fresh and Easy's big company is Tesco. I was very happy when I saw some products from the US imported to HK! But like you said, they were expensive!
April 28, 2009

They reminded me of the weird and different tasting chips from companies like Calbee and Jack and Jill for me!
April 29, 2009