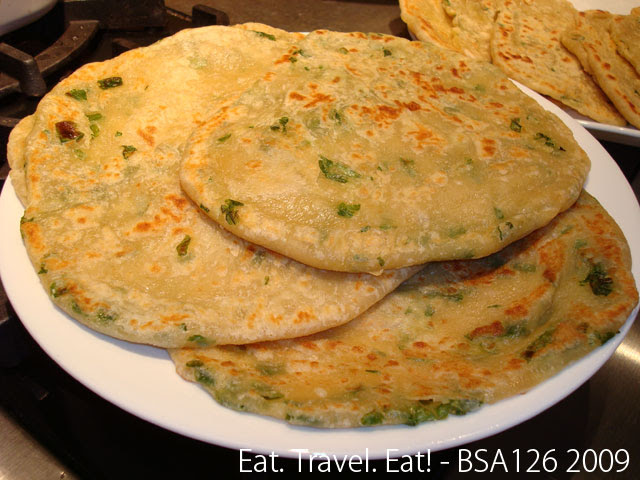 Result? Not what I expected! Well...there is no fault on the videos I watched or on Use Real Butter. The problem was me.

I wasn't looking at the recipe on how to make the dough at all when making it. And guess what? I added 3 cups of hot water. Yes, three cups. Just because some thought in my mind was thinking the dough was a one to one ratio. NOT! It really was a one to four ratio of water to flour. So...with not a lot of flour left, I used 6 cups of bread flour to balance it out. Now it is a one to two ratio. It worked for the time being, but later on I had to add flour while rolling the dough and making the green onion pancake.

Who was kneading and combining the flour and water together? Well...it wasn't me. 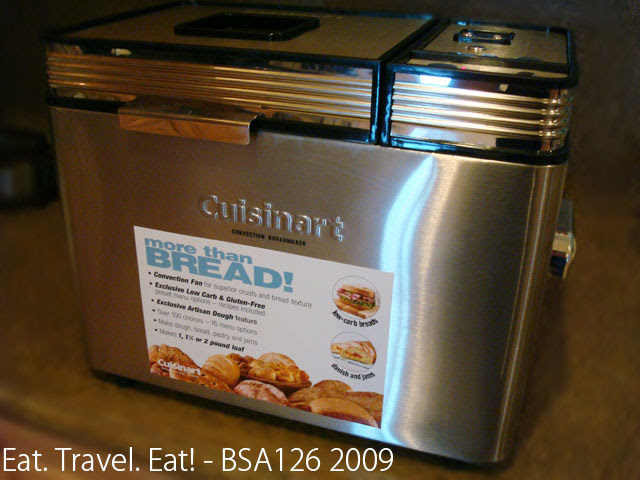 It was our bread maker! Yes...it had the option of to just make dough, and so I utilized the feature. Worked pretty well for the most part. It would have been easier though if I followed directions and added the appropriate amount of flour!

Anyway, on making the green onion pancakes- it is fairly simple, and there are also several ways to do it. Most people do the pinwheel like method, which is to roll out a piece of the dough, add salt and oil too it as well as green onions, and then roll it back up like a log and then make the dough look like a pinwheel shape. Of course though, with so much dough...we cut corners later on. We combined the dough together with the oil, salt, and green onions, and then folded it, rolled it out, and folded the dough to make the layers.

Overall taste? Pretty good. But most of them (we made 11 pancakes with the dough) weren't like green onion pancakes from Mandarin Noodle Deli. They were drier- less oniony, and not as chewy. But about 4 of them were halfway there. And why is that?

Well... we put a ton of green onions in. Plus, we put plenty of oil and salt. It seems like the oil is the one which makes the entire pancake more tender and chewy. And according to our taste, it also looks like the restaurants put oil into the dough as well as use oil that has green onion flavor in it so that there is plenty of onion flavor throughout the pancake. Smart.

Would we do this again? Maybe. But on a smaller scale. This experience though taught us a lot of things:

Anyway, here is the recipe:

Green Onion Pancakes
Inspired by Use Real Butter and Videos on Youtube. And personal background knowledge!

2. Make the dough! As said above, the ratio of hot water to flour should be around one (for hot water) to 4 (for flour). So...for example, if you had four cups of flour, you would use one cup of hot water. In addition, add salt too. Add one teaspoon for every cup of flour you use.

3. Knead the dough (in a bread machine or by yourself) and let the dough rest. Add some flour to where the dough is resting so that the dough won't stick.

4. Make the pancake. Form about softball sized balls from the dough, and roll them out until they are pretty thin. Then, add plenty of oil- the whole surface should look pretty much shiny. Afterwards, add plenty of salt- this is to your taste. We used about 1 1/2 tablespoon of salt for each pancake. Afterthat, sprinkle PLENTY of green onions. Then, roll the entire thing back up to a log like shape, and then roll the log shape into a pinwheel like shape.

Just take the dough, roll it out, add oil, salt, and green onions, and then fold it as many times as you can until it looks compact.

5. Roll out all the pancakes you have into circles- or whatever shape you desire :)

7. Serve them piping hot and crispy. For storage, they will keep for about a week in the fridge. To reheat, steam them to restore some moisture (and to make the interior chewy) and then crisp them up either by a toaster or pan frying them yet again. Or...just toast them up in the toaster or oven. 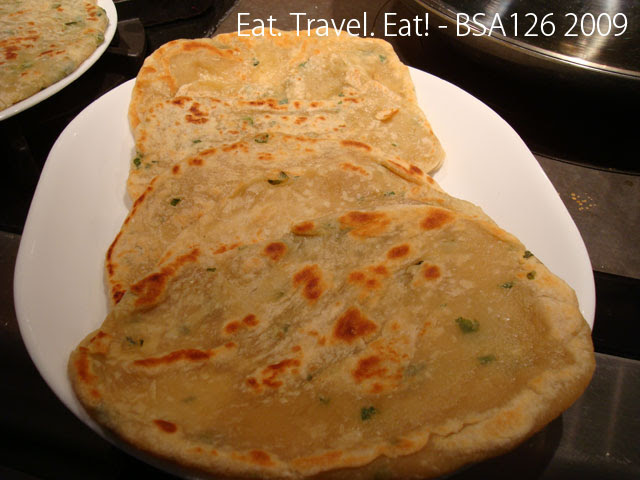 These green onions were not made in the pinwheel method but the folding method. We used less oil in these and not a lot of green onions either so these weren't as delicious compared to the ones above which had plenty of green onions.
Hope you enjoy it!


And as a side note, this is the 100th post on Eat. Travel. Eat! Time has flown very fast.

EatTravelEat said…
Selba,
For the dough yes! I wish the machine could also do the rolling out, putting the green onions and salt, and then pan frying it. But alas...it would then have to be a cooking machine robot wouldn't it?

foodbin,
Yeah...we later on ate it along with sauces instead of leaving it alone to eat. Or else...we would have never finished it!

Wandering Chopsticks said…
Congrats on your 100th post. Time did go by pretty fast! Seems like you just started.
April 25, 2009

Thanks! It still feels that way for me too. Can't believe it's been almost four months since starting this blog.
April 25, 2009

Thanks! It was a great experience making these but also very time consuming with the incident I had with the wet dough.

Everytime I eat green onion pancake outdoors I can only think of the oil in the pancake! Funny...
April 29, 2009

Jules @ Lovely Las Vegas said…
Way cool! I feel sheepish now... we were just at the Asian market and the store was having a special on prepared onion pancakes and we picked them up. But both of your versions look way yummier. Gotta test it out some day.
April 30, 2009

Thanks! Don't feel sheepish- we also usually get the frozen or the prepared green onion pancakes at the supermarket too. This was probably one of our very few times that we made it at home. :)
May 01, 2009