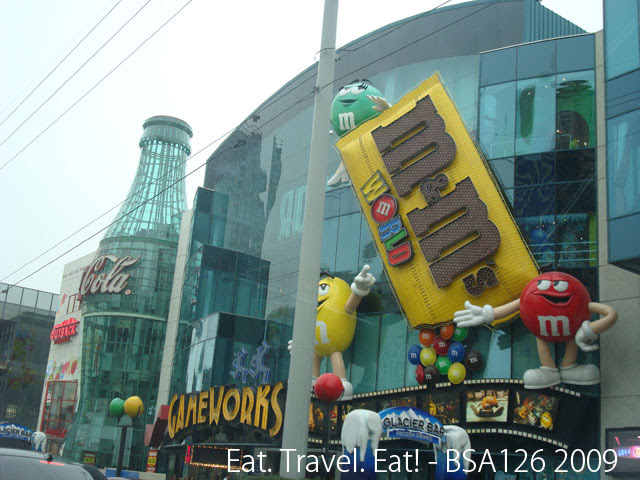 The always interesting and fun Showcase Mall has been in Las Vegas for years. It attracts many people, with stores that you may not be able to see in many parts in the country. We've visited here for at least 7 years, and never once has it got boring. Whether it be Gameworks, The Coco-Cola Store, or the famous M&M's World, you know you'll have a good experience. It's a nice place to spend the afternoon in with all the sun coming in from the glass exterior. 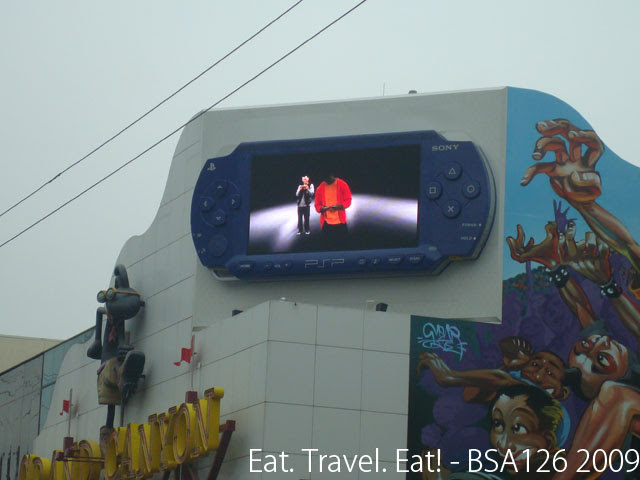 Outdoors, there is even more stuff to see, including this huge Sony PSP which has stood in the space for at least a year or so by now. This though is near the edge of the block...
Anyway, Showcase Mall has a compact space for a "mall", but it is very, very tall! There is a huge atrium in the middle with small stores like the aqua massage and other vendors. In the center of the atrium is a rock wall (which I haven't been on), and escalators to go down to Gameworks. M&M's World and the Coco-Cola store take the two outer edges of the mall, and so does the Tix 4 Tonight shop (which sells reduced show price tickets).

Personally, out of all these places, I always long for the M&M's World first. And so...let's enter M&M's World. 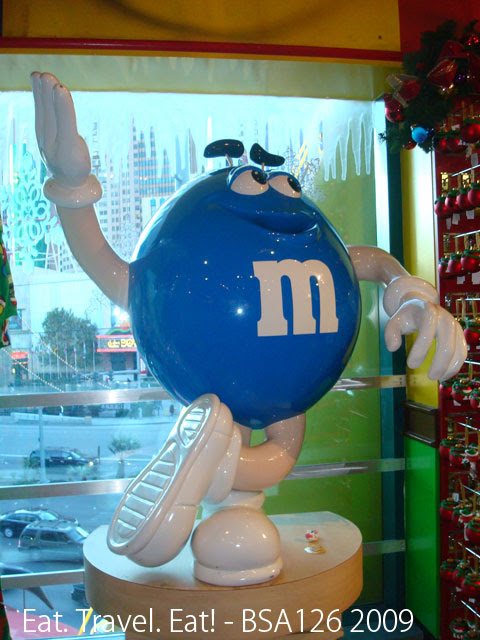 A very beautiful statue of Blue.

This Las Vegas M&M's World is just one of the three locations in the entire world! No wonder why so many people come here. M&M's World says their entire building area is 4 stories tall, but there are actually more levels than that. In addition, it's 28,000 square foot worth of M&M's. And what can there be to fill up the space?

It's always fun to be here. The biggest attraction for me though, is the entire wall of M&M's on Level two. 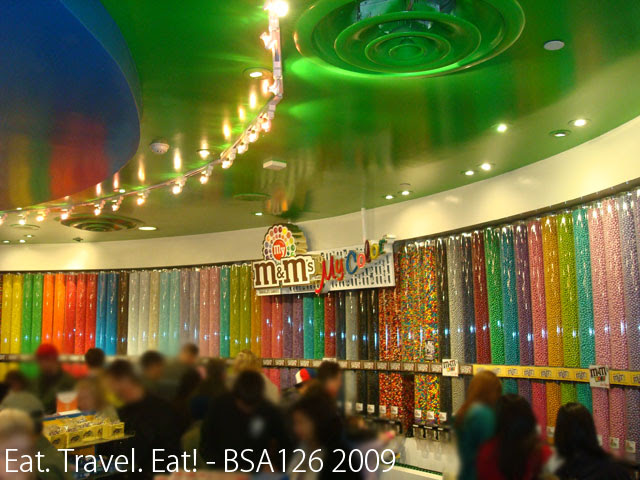 Yes, your entire choosing of many different colored M&M's are here. And there are so many of them, it's hard to capture a shot close to it. This is probably seven eighths worth of the wall. It really is that big!

There has been a change though. Before, it used to be called "Colorworks". Now, it's called "My Color". In my opinion, I liked the old name better. It was more creative.

Annoyingly, there are also tons of employees watching the My Color Wall. They also keep shouting that it's 9.95 per pound. WHAT!? Regular packaged M&M's at supermarkets usually cost 5 dollars or less per pound.

And definitely, there were people who loaded up who didn't know about the pricing. Sadly, I had to watch a girl dump almost all of her M&Ms, because her mom knew the total price would be way too much! I should have asked if I could have some :).

We also got our own mix of M&M's, which we planned to give to a friend. Just about 6 big handful's worth of M&M's cost almost 7 dollars. Pricey... 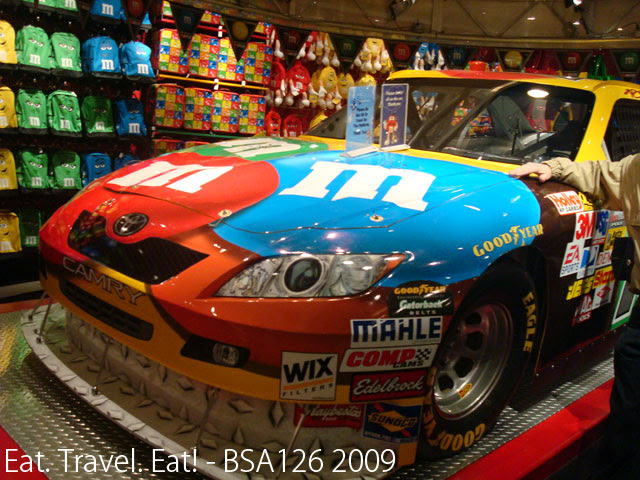 There's still lots to see other than the color wall. There's a show called I Lost My M in Vegas, and special Nascar Cars. Like this Toyota Camry, which many people were taking photos at.

Speaking of stuff to see, some people have said the Ethel M's store has gone. And yes it has! However, there's still a spot where Ethel M Chocolates are placed, which is near the upper floors. And if you haven't tried it before, you should! Their pecan brittle is awesome and their quality of chocolate is very very nice. The bars of chocolate are another good option too. 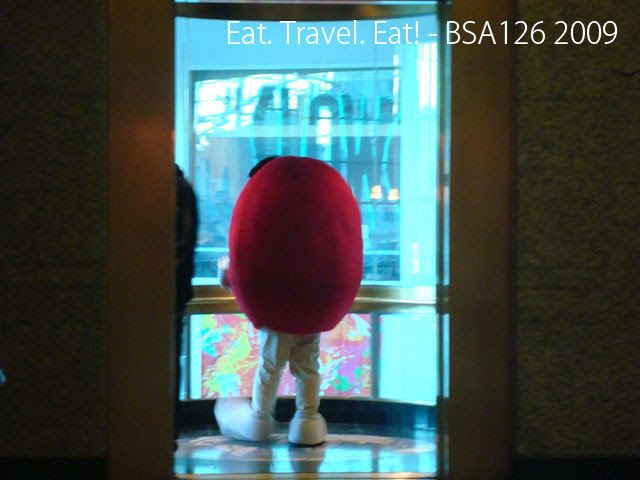 M&M's World is also a great spot to see people and things. I noticed Mr. Red go onto the elevator. He didn't seem to want to take photos with people. Instead, he just wanted to go down the elevator :).
But besides people, M&M's World also provides some great views of the Strip. And if you can take out some of the glare in some of the photos from the glass, you'll get some very nice photos. 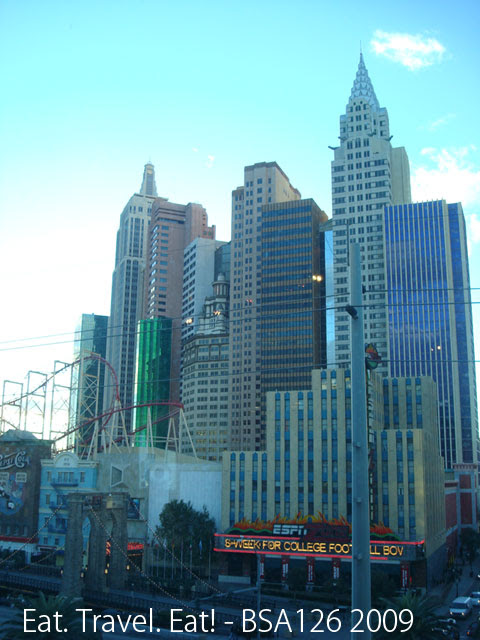 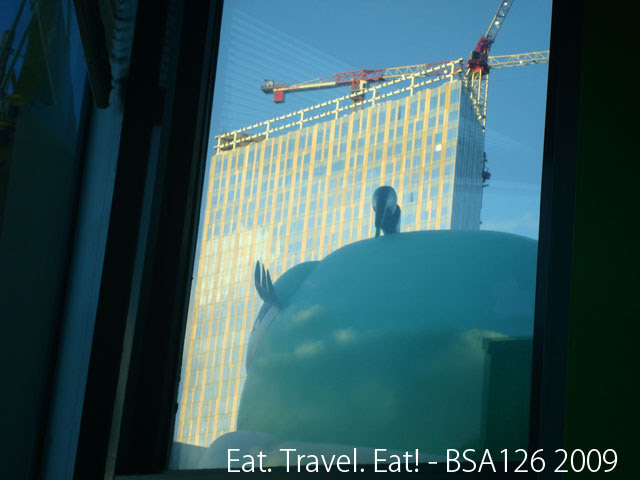 This is the soon opening Mandarin Oriental at the CityCenter, only blocked by Green's statue outside. 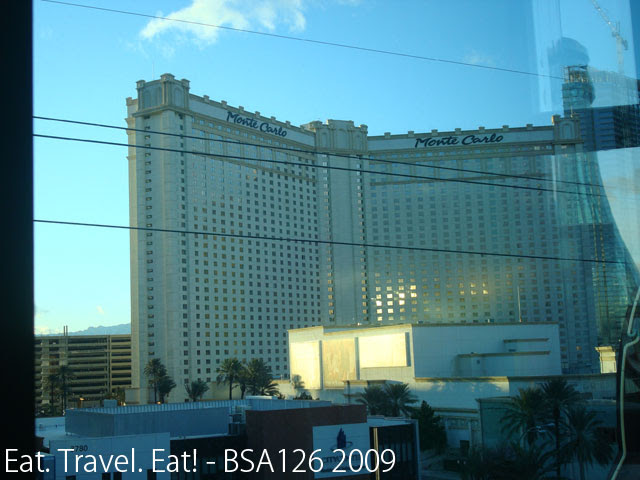 And here's Monte Carlo with some CityCenter owned building like the sales pavilion to the bottom left. 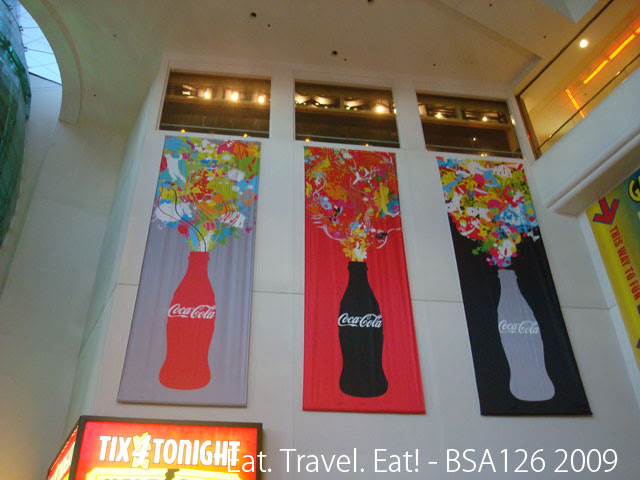 Besides that selection, you can also choose from a classic glass bottle of Coke, a Coke Float, or just a regular soda fountain beverage. It's your pick :).

As for other parts of the Showcase mall, the first floor also has shops like a electronics shop and the Tix 4 Tonight, and the bottom floor is devoted to Gameworks. There is also a movie theater which I haven't been to yet, and there is also a food court.

And there was something interesting there- even if the food court was all chain food courts. 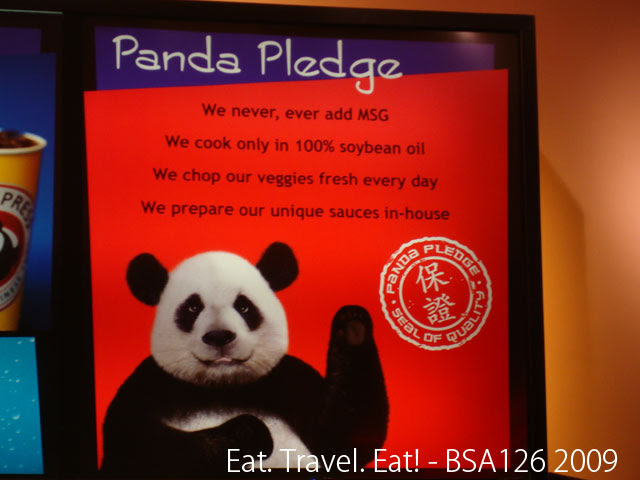 Passionate Eater said…
Whenever I go to Vegas, I make sure to visit Showcase Mall to get those 1/2off discount tickets. Also, I never knew there was a Panda Pledge! Funny!
April 15, 2009

Those discount tickets are always wonderful! You can also get them at the Fashion Show Mall. We got them this trip and saved a ton of money and even upgraded to a better seat at the hotel...and the entire price for one seat was still less than the cheapest seat at the show if you bought it at the hotel! Great :).