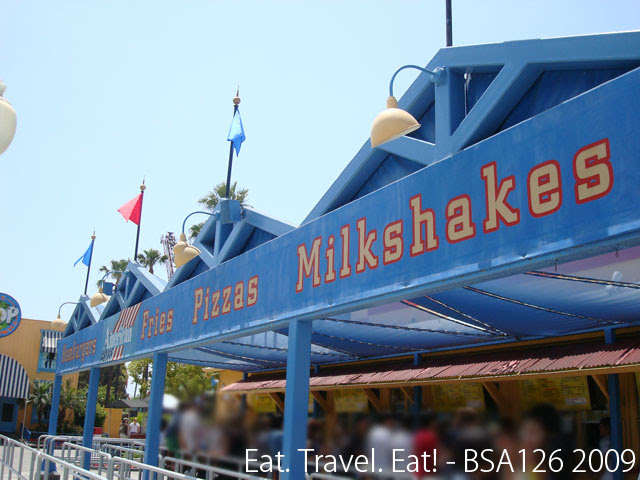 I recently went to Knotts Berry Farm along with my school for a "scavenger hunt" (aka graded assignment) for about 5 hours last week. And so, within that 5 hours, we decided to eat too at this place which never really showed it's real name at all in the exterior.

From the outdoor signage it just said American burgers, shakes, etc. Nothing about the name of the place! Only the map and the receipt mentioned Angel's Diner. What is also very interesting is that they say they have milkshakes (as shown in the photo) but do not. You have to go to another restaurant for shakes.

Mainly, we decided to eat here as part of the scavenger hunt. One of the rides which we needed to look at was really close by. And if you were wondering what some rides/things were nearby, they were: Perilous Plunge, Sky Cabin, Wipeout, Supreme Scream, Log Ride, and the Xcelerator. 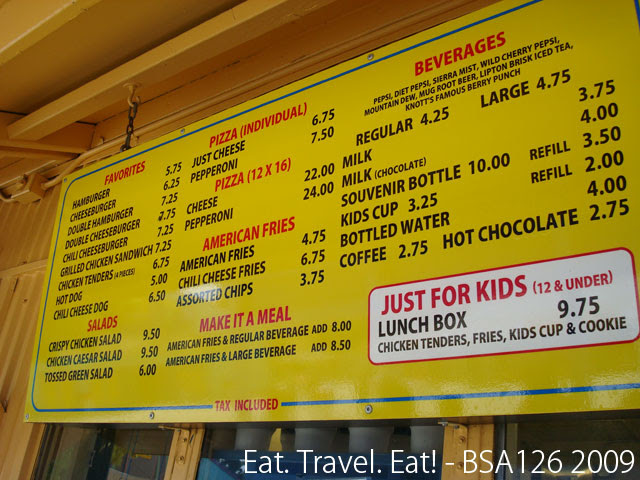 We lined up in to the line which was pretty empty considering that it was an amusement park. And right in front of us, there was the menu. At first, it was hard to choose something. I was debating whether I should have a burger or a salad. But then, I saw a burger, and it didn't look appetizing- the meat was not browned. It definitely was not as nice as Disney's catering. The so called "American fries" were basically just a big bowlful of crinkle cut fries. And so I started debating about the salads; what came out from my mouth is what I chose. I was still debating at the counter!
After I ordered, it seemed like the staff got worried. They suddenly were asking, "Do we have any salad???" It seemed like they didn't, and so I asked the cashier again and she just told me to wait. By the time my salad came, my friends who ordered later than me already were eating their burgers at the outdoor shaded sitting area!

I then saw (after about 5 minutes waiting) the chef trying to smash the lid down onto a crispy chicken salad which is how they are supposed to serve it as. However, she could not close it up at all! And so she gave the crispy chicken salad to me, with the lid open, saying that she added so much chicken that she couldn't close the lid anymore! How nice :). We exchanged happy greetings. 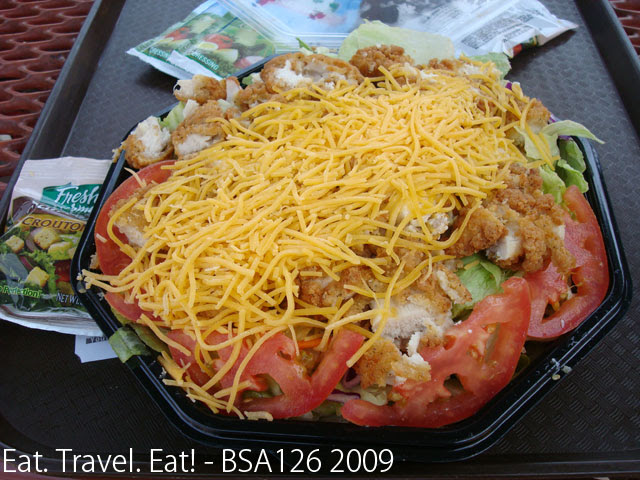 As you can see, the crispy chicken salad was HUGE! There was a thick bed of iceberg lettuce, shredded red cabbage (just a bit), some shredded carrots, and tomato slices. On top of the layer of veggies was a layer many freshly fried, crispy cubed pieces of their chicken tenders, and on top of that was a covering of shredded cheese. 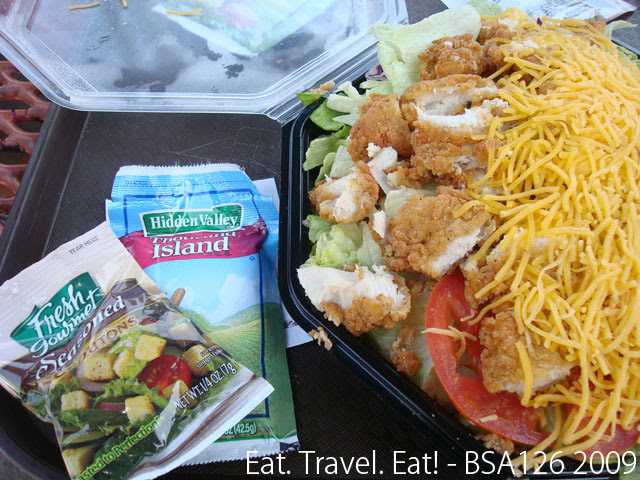 Served alongside were packets of Hidden Valley dressing (I picked Thousand Island, but I could have picked Italian, Ranch, or Caesar dressing), and 2 bags of croutons by Fresh Gourmet.

The taste of the salad was pretty good. The chicken, being hot (and the amount basically the same as an order of chicken tenders), started to melt some of the cheese in the salad. I liked the combination between hot and cold, and the different textures from the hot crispy chicken pieces which had tender meat to the crisp greens. Although one probably could make it at home, the salad was a good deal when eating it at places like Knotts. Looking at the menu, the crispy chicken salad looked like a order of chicken tenders and the tossed green salad. If I had ordered separately, that would have been 12.75. I got it for 9.50. :)

What was surprising to me was that the crispy chicken was actually freshly fried and hot! I was expecting the chicken to be cold, but I was wrong. Eating the salad was a bit of a task, and after eating the salad, I was really stuffed. My friends said they could have shared it by half and they would be full! I probably was eating for another 10 minutes after my friends had finished- luckily they were kept busy by the Knott's assignment of Scavenger Hunt.

When asking other students who had also came with me for the California Adventure trip, they said they thought the food at California Adventure (Taste Pilot's Grill) was better compared to here. One of my friends complained about their chili burger not having the chili ON the burger but instead being poured basically onto the side. I pretty much agree with their complaints. The food at Disney was more fresh looking compared to at Knott's, but the salad was pretty good; however the burgers and sandwiches seemed so-so. Pizza looked pretty good- the map even said, "best pizza in the park", but I decided not to pick pizza.

Overall? An okay place. Other than the salad and pizza, the other items didn't seem to be too good. There are however, other choices in Knott's Berry Farm, such as Panda Express, a Mexican Place, chili/chicken places, and more.

Writeup, photos, and videos of Knott's Berry Farm will be coming up soon!
----

Technical issue: Sorry for those who wanted to leave a comment on this post within 4 hours ago (currently 8:43 PM Pacific Time, May 19, 2009). I accidentally made the post have no comments; but now I have switched it and it is now open for comments again :).

Mochachocolata Rita did leave a comment which is at the Mother's Day at the mall posting (click here to view). I am putting it here too. Here is what she wrote:

"maybe it was my technological stupidity.. ^_^ i couldn't manage to leave a comment on the Knott's Berry Farm's Angel's Diner post...the crispy chicken salad...WOWWWWWWWWWWWWW i wish hk's kfc or mcD's serve this. it's no secret that i lovee anything involving crispy chicken :)"

shavedicesundays said…
I dind't know you were in school AND keeping a blog too. Kudos to you!
May 21, 2009

EatTravelEat said…
pink,
It was definitely good :). And I was very lucky I got a overfilled salad- I have never had anyone before give more than they were supposed to!

shavedicesundays,
Well...school isn't that hard :). But if there is a reason why there are less posts it is because of school. And more posts equals no school!
May 21, 2009

EatTravelEat said…
joanh,
Sorry that I never replied back! I too rarely go to amusement parks. If it had not been for school I probably would have not gone to Knotts anyway.