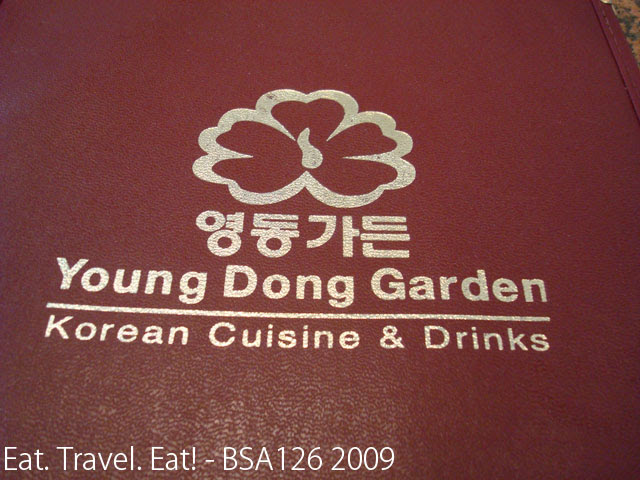 */Update, February 11, 2012: This restaurant has gone through a renovation recently, and I have written a new review to reflect the changes made to the restaurants; click HERE to read it./*
Restaurants can bring many memories for some people. For me, this is yet another place which has sparked many memories from me.We've had many big parties and meals here for the 5+ years it has been open. I still remember back then when they served BBQ Chicken on a huge cast iron pan. Good memories.

However, this place has changed since its opening. Ownership changes, food changes, menu changes, and more have happened to this place. I would say some of the changes were positive. But some were negative too. One person apparently was mad enough that there was a conversation of cuss words in the restaurant according to their review on Tripadvisor.
However, after posting their review...they didn't do anymore reviews, which could mean the review is fake.

Entering the restaurant from its side entrance (which you would do if you were parking there), you'll sometimes see a guy actually cutting the meat for the BBQ meats. It worries some of us as in the summer and spring, there are tons of flies and bugs. You know what that means.... 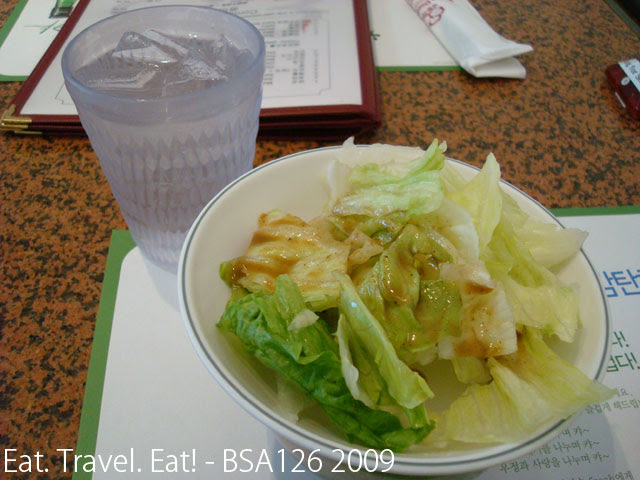 After you sit down, you'll be greeted with some water (which they say they won't provide for some reason unless you ask) and a small salad with lettuce and a tangy sesame dressing which my friends love. The salad is flavorful with the dressing and definitely tasty. After eating the salad, my friend always hopes for more dressing. 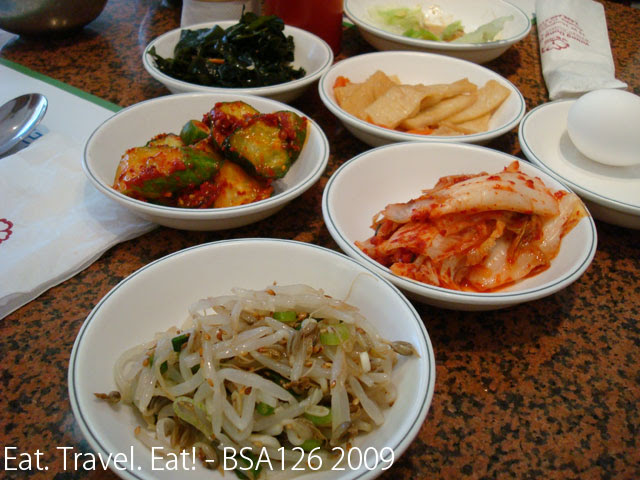 A negative which arises pretty recently is the panchan. It has dramatically went down compared to the past. Unlike most restaurants that serve the panchan when you finish ordering, they serve the panchan very, very late- almost to when you food will arrive very soon. In addition, the number of panchan has decreased. And their other side dishes have also decreased. Before, there were fish, cucumbers, and other delicious dishes. Now, it's just these 5. Plus... 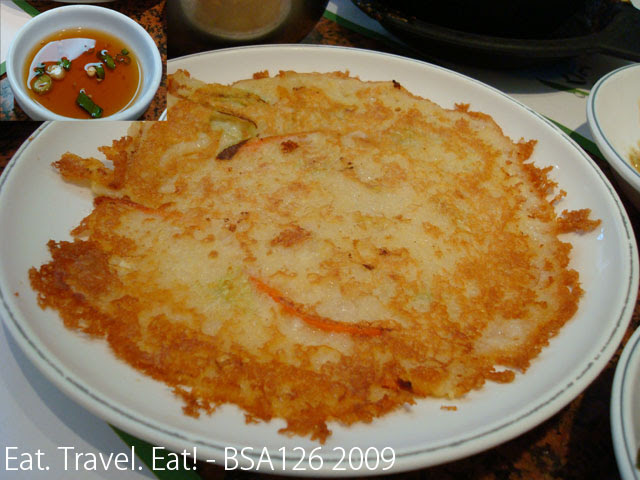 A crispy, vegetable "pancake" which is served with a tangy soy sauce. This is probably my favorite of all the panchan, as this is made freshly and has a great texture contrast. Dip it with the dipping sauce, and you are bound for a flavor sensation of textures and tastes. 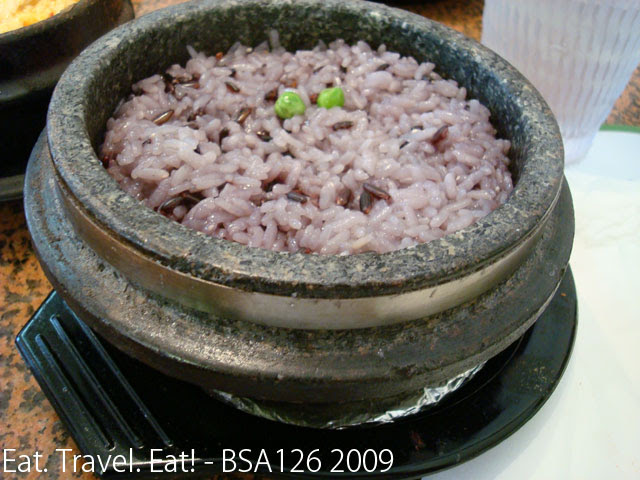 With every item ordered, you also get a hot stone pot's worth of rice. In this case, it has a mix of black rice and regular rice, which causes intriguing effect to the entire pot of rice: purple rice! A bit of a twist from your usual white rice. However, unlike it used to be, you can't get them to help you pour tea into the pot after you finished eating the rice from the pot- now you just leave it alone (or scrape the pot to get the rice crust). 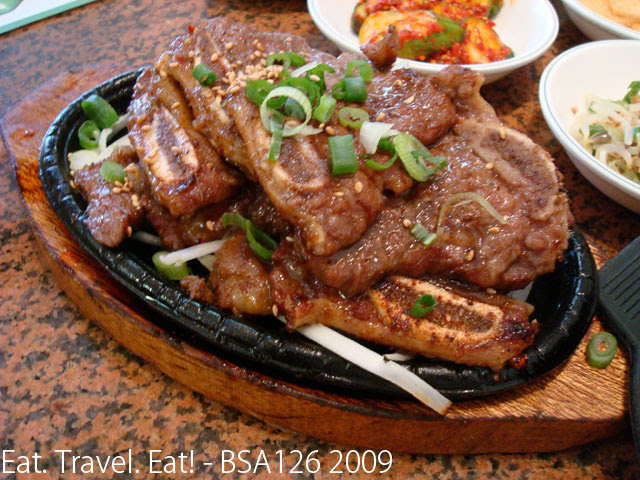 For weekends, we like to order a combination meal, which has several different options. We usually pick a combo of a tofu stew and a plate of meat. Here is the kalbi, or short ribs. It is one of my favorites as well as my friends' favorite. We order it quite frequently here, but for our most recent visit, the shortrib was a bit dry for our tastes and wasn't as juicy as usual. However, the marinade's flavors were consistent and tasty. 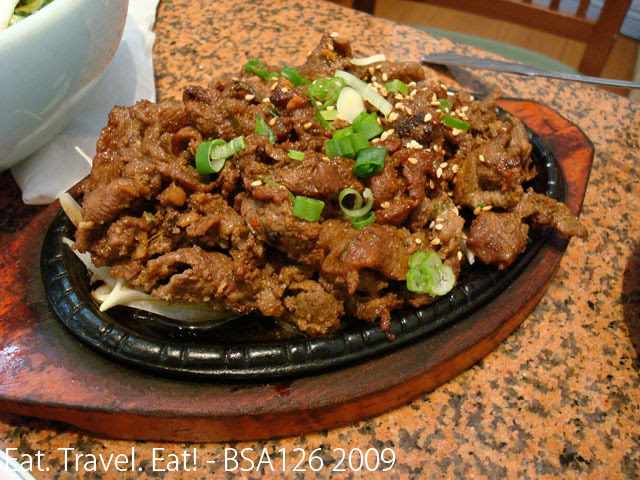 Bulgogi, or thinly cut marinated bbq beef, like the shortribs, were again drier than usual for our most recent visit. The flavors though were spot on, but if it was a bit more juicy it would have been even better. 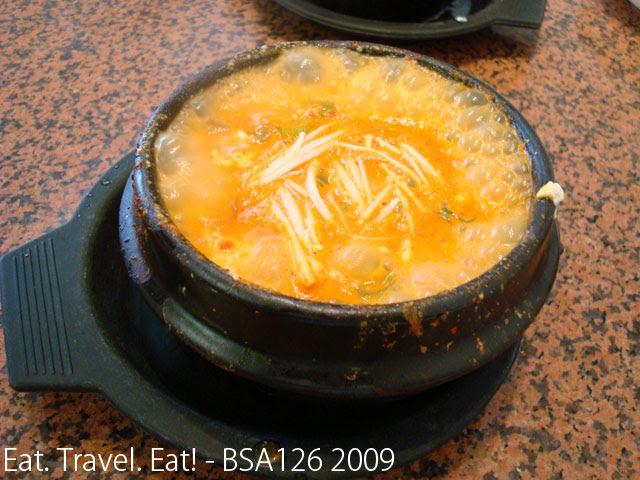 Along with the meats comes a tofu stew as said before for the combination meal set. You can choose from different items in the tofu (which can include seafood or other items), as well as the range of spiciness. This was a mild tofu stew with mushrooms, and it had different types of mushrooms as well as having soft, silky tofu. You also get to plop in an egg to cook, which we did too.

The taste usually is pretty good, but for our most recent visit it was bland. A bad day maybe? Or is it just how it is now? 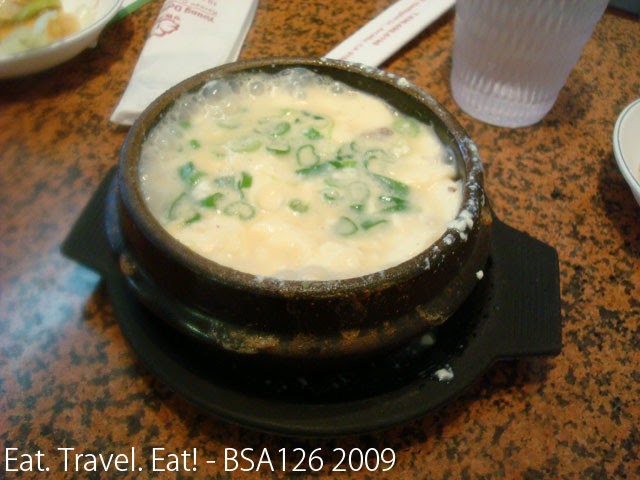 People who don't like spicy food still have an option for the tofu stew, as they offer it plain as it with none of the spicy paste. It tastes pretty good actually this way- you get to taste the tofu by itself and the ingredients have a better opportunity to shine out. The green onions add a nice touch. 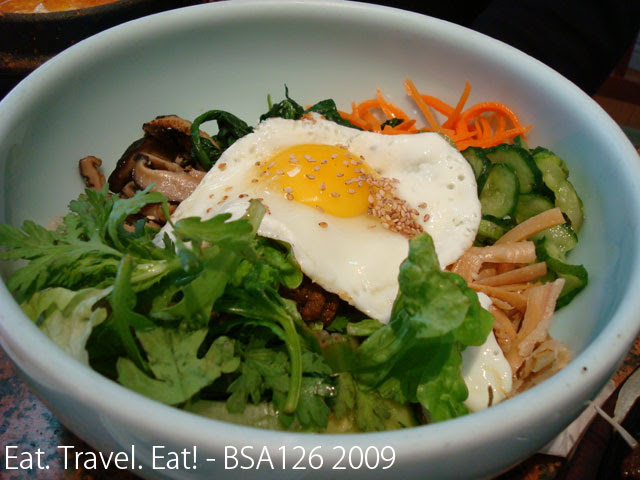 Obviously, other than tofu stews and barbecued meats, there are other choices, like this Bibimbap. Personally I didn't get to try a lot of this, but my taste of it was pretty good. There were many veggies as you can see, but very little meat. Rice was served to the side, as well as the spicy paste. 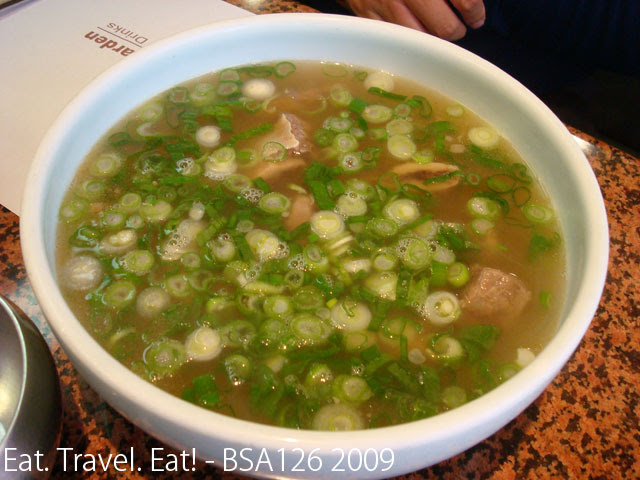 What Young Dong Garden calls "Kalbi Soup" is also very good. Basically it is a clear meat broth which also has some clear glass noodles as well as plenty of green onions and pieces of shortrib that have been cooked to the point of "fall off the bone". It is a very flavorful meat soup and the noodles are nicely chewy. Green onions add a nice perkiness to the soup. I would say this is one of the better items here.

And to end the meal, you get a piece of melon gum, which seems like the standard for most Korean restaurants in the area.

food makes me happy said…
Short ribs are good!
But I always have a hard time trying to eat that "elegantly" in the public....Just can't get enough of that boney goodness!
May 11, 2009

Shortribs definitely are hard to eat "elegantly" in public. And since probably many people know that we eat them as cleanly as we can :).
May 11, 2009

foodbin said…
over here, Korean food set comes with only white rice but lots of panchan(10).
the kalbi looks good- meaty with some fats too.
May 11, 2009

EatTravelEat said…
foodbin,
Ah, I can see that with your header picture! So many different sauces and items on the table :).
May 12, 2009