June 29, 2009
This restaurant for some reason, is an exceedingly intriguing place. Have you ever been to a restaurant where it is almost hard to find the logo of the place, or a business card at the front waiting area? Probably not for many of you. But this is one of those places. If you don't look carefully, you really don't know what restaurant you are in. Only the menu has their name, as well as on one of the walls of the exterior and one of the shade places. Why? I do not know. But it is a busy place with plenty of people, even though its signage is not the best. 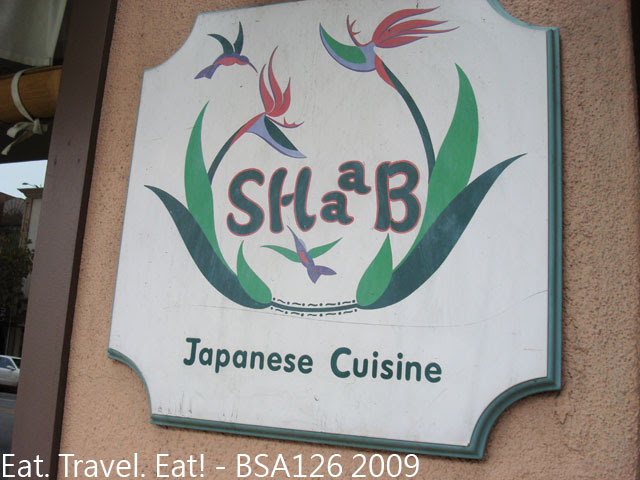 Parking is available pretty close by, but there isn't any validation (or at least Shaab doesn't talk about it) available from what we have seen. Plenty of parking, but it is a pretty crowded multistory parking structure.

When you arrive, there are two doors that split up a tea place and then to this restaurant. Make sure you enter the right place, which is to the left when you enter, and you will be fine.

In general, the restaurant is pretty dark and not too bright. The lights are pretty yellow, which doesn't help for taking photos- decent photos need plenty of editing or different option settings on the camera. There are plenty of tables though. We have never encountered a wait at this place before.

Above is the lunch menu, which we like to go to restaurants for (after all, you can save a lot of money, like Embassy Kitchen, for the same food that you get later on during the day). Plenty of options to choose from, and there is a "new menu" and the existing menu. Main difference? Different combination of foods. That's it.

Service is pretty slow here, so if you plan on needing to go to somewhere within a hour of arriving here at Shaab, pick somewhere else to eat. Our meal took us almost two hours to finish. About half of the time was waiting for our food. Yes, we definitely got extra hungry by the time the food came. 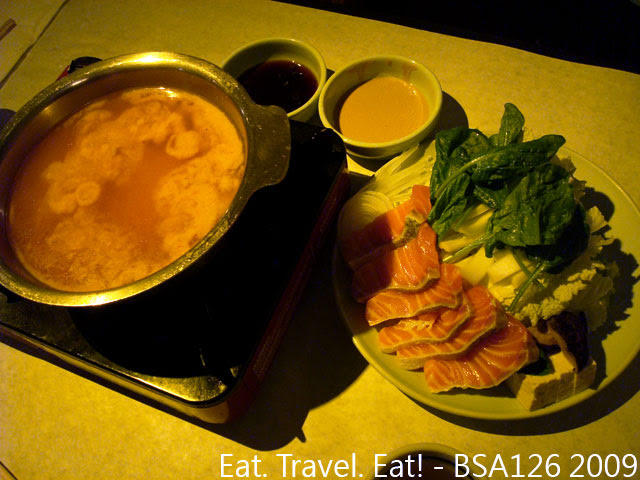 Luckily, the first dish was the Salmon Shab or Shab Shab, a dish that was easy to share among several people. Basically, it is just a shabu-shabu with a flavored soup base already in it, which was a salty miso soup. There was plenty of items to cook in the hot pot, like plenty of thick salmon slices, tofu, several types of vegetables, and clear glass noodles. Served alongside was some ponzu sauce, as well as a thick sesame sauce.

We liked this dish because we could cook everything to our liking. So, our outcome of cooking the salmon was really good, as the salmon was still pink and still rare in the middle, but it was already warmed through and cooked on the outside. Very tender and yummy, especially with some of the dipping sauces. The glass noodles were filling, and as time progressed the salty miso soup didn't get as salty, but still was a bit salty. 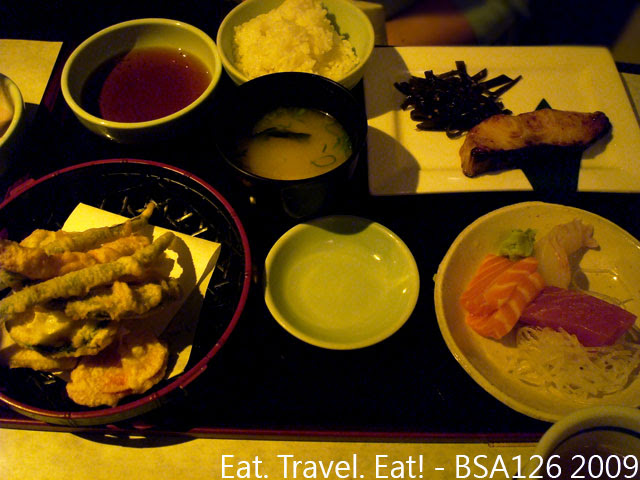 One of my dining companions ordered a lunch set from the main lunch menu, which consisted of tempura, sashimi, and broiled black cod, along with some miso soup and rice. I wasn't able to try any of the black cod but my dining companion seemed to be happy about it. The tempura was very nicely cooked, with a crispy and light exterior. Everything was cooked nicely on the inside and with the dipping sauce it was a great treat. 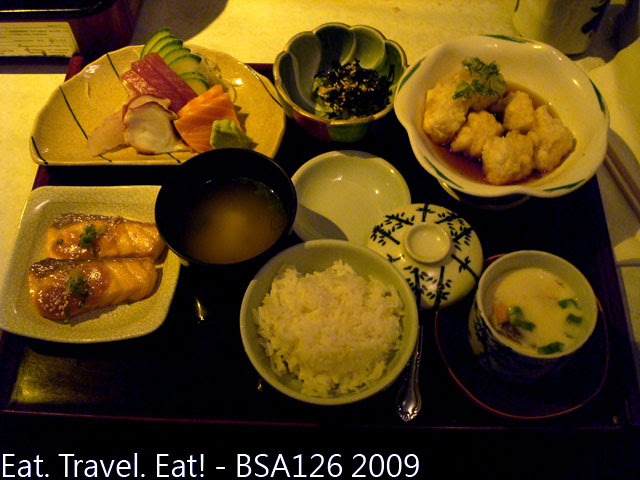 I ordered the Special Lunch, which had a lot of different additional things compared to the black cod, sashimi, and tempura combo which one of my dining companions ordered (only ten cents more). This had more sashimi, a very good chawan mushi, steamed rice, miso soup, broiled salmon, agedashi tofu, and a cucumber and seaweed salad. The broiled salmon was very nicely cooked and was tender, but the sauce was unexpected. It tasted a bit sweet like teriyaki sauce but wasn't as sweet compared to the food court teriyaki sauce. The salmon was pretty much good by itself though.

I dumped a bit of the sashimi into the shab for fun and the results were the same as the salmon pieces before that we dumped to cook in the shab. The octopus was very tender and not too chewy, and the salmon was just as fresh as the salmon pieces in the salmon shab. Tuna was flavorful and meaty. All good sashimi- nothing was fishy tasting.

The seaweed and cucumber salad was dressed up in some sesame dressing and was served cold. A nice bite during the day.

The agedashi tofu surprised me a bit, as I didn't know it was fried tofu (yes, I have very little Japanese food knowledge). There were plenty of very lightly fried pieces of soft tofu, which were then placed in a pond of light soy sauce similar to the tempura dipping sauce. Although light in flavor, it was very good.

And I did know what chawanmushi meant, and I was surprised that they also gave me a special spoon to eat it in. Wow. It was nicely flavored and was very soft, and there were little goodies inside, like shrimp, meat, and other things. Very nicely done.

Lastly, my other dining companion ordered the Salmon Teriyaki Combination from the new menu, which consisted of salmon teriyaki, dynamite (mushroom), tempura, mixed vegetables, rice, miso soup, and some cut melon. I was able to try a bit of the salmon Teriyaki and it was tender in the middle, but a bit dry near the outside. My broiled salmon was more tender. There was also skin attached, which was slightly burnt. The teriyaki sauce wasn't ultra sweet like some fast food places which was good, and the dynamite was a mixture of masago, various mushrooms, and mayo which was then baked. Yum.

Overall, it was a great visit! We'll return soon to show you more items. Another plus: lunch specials are available on all seven days during the week, unlike some places.

pleasurepalate said…
I've been there for dinner and remember that the service while friendly, was also on the slow side. But I enjoyed my meal and sometimes that's all you can ask for.
June 30, 2009

EatTravelEat said…
pleasurepalate,
Yeah, I agree sometimes the food is more important than the service. Good service but bad food is a awful combination, but good food and so-so service is fine with me.
July 03, 2009

foodbin said…
I always like Japanese set meal-you can eat a bit of everything. The sesame sauce on the first photo looks good.
July 08, 2009

foodbin,
Always like these set meals. But I always feel sorry for the dishwasher people in the restaurant. So many items to clean just for our own table!
July 08, 2009