July 13, 2009
There are plenty of American restaurants in Arcadia, scattered throughout the entire city. Places that have a bar and a full dining area though are a bit less. A close example to BJ's would be the Matt Denny's Ale House, which is very dark inside and serves just okay food. BJ's though we find a bit better for most of the choices. Plus, the food just looks better. Better lighting equals for me a better dining experience. 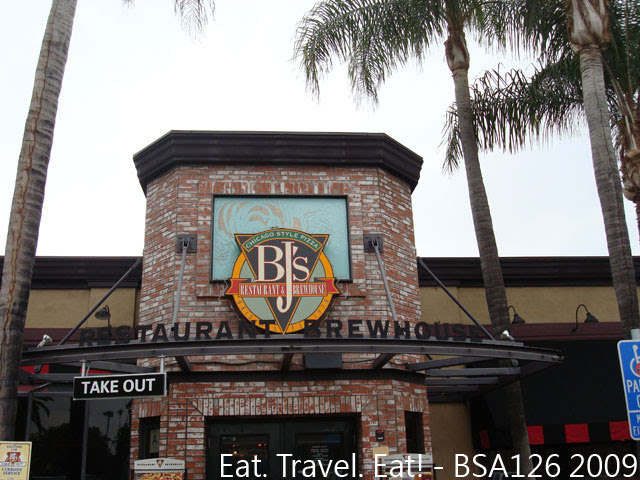 The Arcadia BJ's has been here in Arcadia for many years already, with its outpost close to restaurants like Maki and Sushi and Sesame Grill, as well as the AAA Auto Office and the majority of hotels in Arcadia (including the Embassy Suites, Hampton Inn, Residence Inn, Hilton Garden Inn, and Marriott Springhill Suites. If you notice, the logo on the outside of the restaurant is their older circle logo and not the the new red triangle logo.

BJ's has been offering their new lunch specials, as well as special promotion offers in the mail for quite a while now. Their lunch specials are a great deal during the weekday. The combinations to choose from are aplenty and the best part is that the food is plenty for the price you pay- no running away feeling empty!

This visit though, we did not get the lunch specials as our visit was during the weekend. Right when we arrived they asked if we wanted drinks and appetizers, and within a few minutes our drinks and appetizers came. We were not even finished looking at the menu and our appetizer already arrived. That is just FAST! 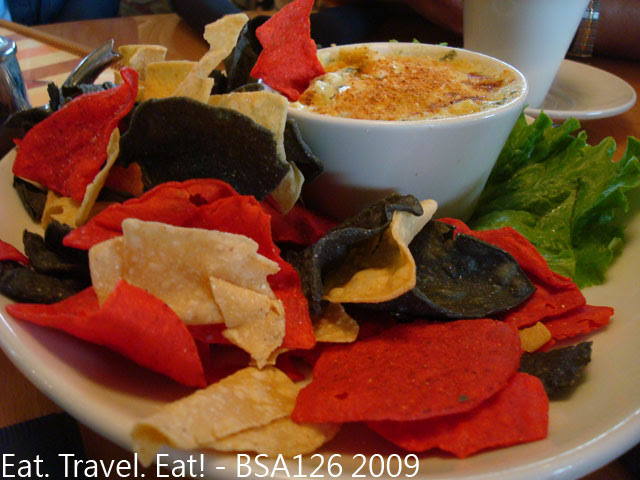 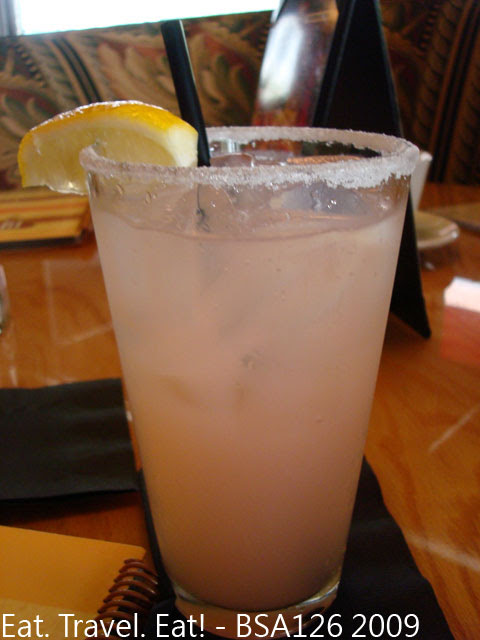 What arrived along with the spinach and artichoke dip was our pink lemonade (2.45 USD). Pink lemonade comes automatically even if you just want lemonade. BJ's makes their lemonade very tart and also pretty sweet. A sugar rimmed glass comes with every glass of lemonade, even if you get a refill, which is free!

We then ordered our dishes while enjoying the appetizer and lemonade, and then our clam chowder (5.50 USD) came shortly. 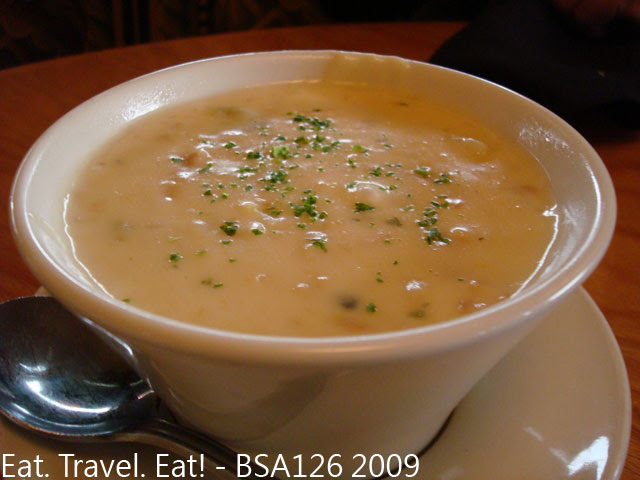 We used to order this very often at BJ's. Before, the bowl was fat, stubby, and filled with tons of clam chowder. It was around last year when they reverted to this new bowl. We asked them about the bowl size and they said it was the same. Uh...I don't think so!

Crackers were served along with our clam chowder, but we did have to ask for it. The staff sometimes forgets...

Anyway, the clam chowder was very good, but a bit salty. It was creamy with plenty of potatoes and clams in it. One of the better clam chowders in the area, but most places just used the canned stuff anyway in our area. If you want good clam chowder, you're off to Massachusetts at places like Victoria Station...or find a seafood restaurant!

Our other items arrived at the same time. 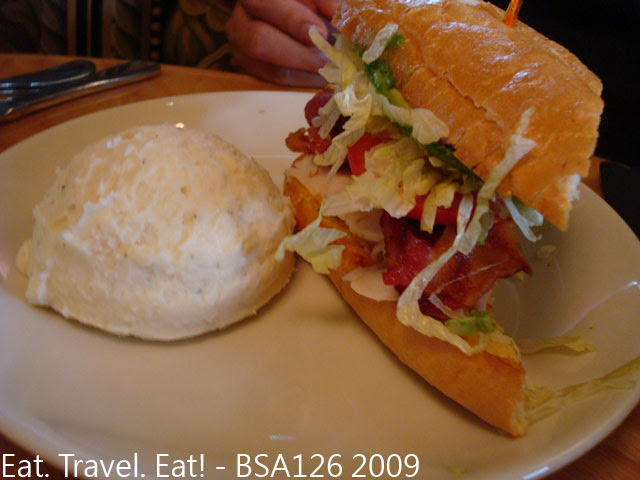 One of my dining companions ordered a half of a cobb sandwich (6.95 USD), which came along with a side (in this case, mashed potatoes). I didn't get to try it but inside were cobb salad ingredients like lettuce, tomato, ham, and bacon. 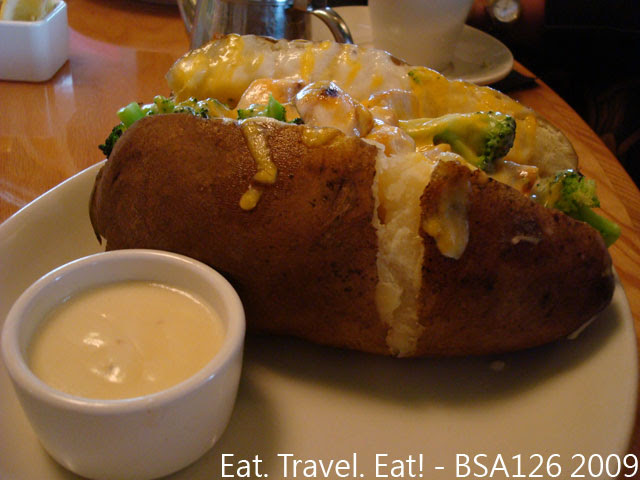 Another dining companion ordered the Grilled Chicken Potato (appearing on the check as the grill chick potato for 8.95 USD). AS you can see in the photo, it was a extremely large baking potato which was then split open and filled with grilled chicken, cheese, and broccoli. A side of cheese sauce was served on the side which really didn't need to be utilized. This was very fulfilling, and my dining companion could not finish it. It was just too large! Even supermarket baking potatoes, like the ones at Fresh and Easy, are not that large. 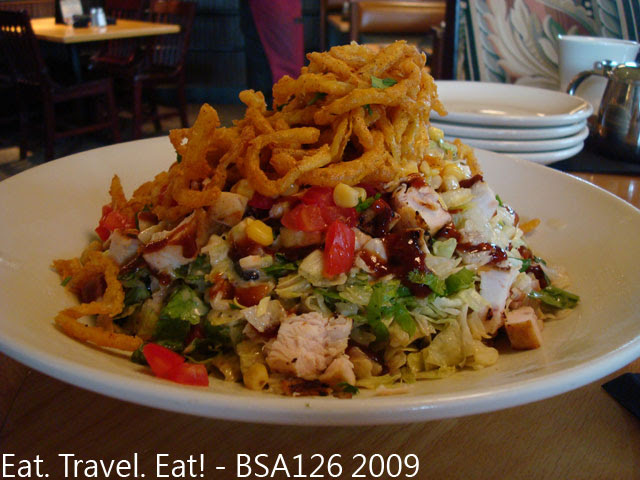 I ordered the BBQ Chicken Chopped Salad (10.75 USD) which I was hoping to be similar to California Pizza Kitchen's BBQ Chicken Chopped Salad. Obviously though, it wasn't. There were plenty of corn, black beans, tomatoes, lettuce, and chicken like at CPK, but there were also a bunch of fried onions on top which were yummy and delicious. All the flavors melded together really well, but a texture profile was missing- the crunch from the lettuce! It felt like the salad had been dressed for hours and was sitting there waiting to be eaten, instead of feeling freshly tossed with dressing. If BJ's could fix this then it would be very similar to California Pizza Kitchen's salad.
Overall a okay visit for the most part. The prices were a bit expensive for what you got in return. Lunch during the weekday offers some more specials and discounts, so we'll need to visit so that you all can see some more items on the blog! :)

tigerfish said…
I miss the happy hour in BJs. Do they have it over there? And love the samplers for beer....neat!
July 16, 2009

I haven't seen it at this BJ's, but that may be also because that I haven't visited BJ's during happy hour times of the day. Probably they do though! They advertise a lot on their lunch specials and free stuff these days.
July 21, 2009