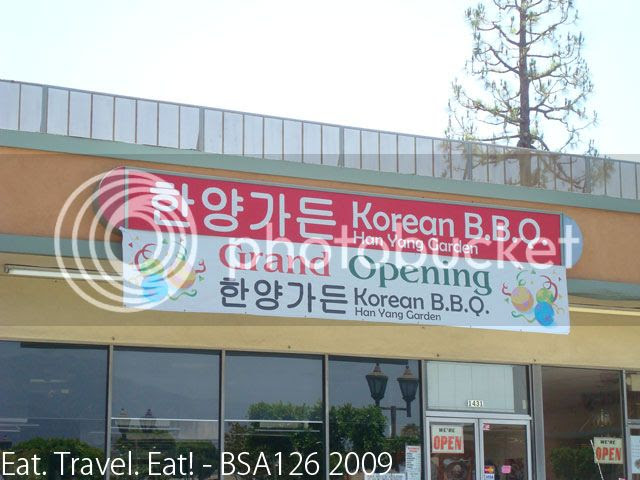 As you may know, this restaurant opened after Seouljung Korean BBQ which I reviewed several months closed down. So, we went to check out the new restaurant after a few months of its grand opening.

First impressions? A very weird oil and smoke smell was all over the restaurant. However, there was barely anyone in the restaurant other than the employees working there. We couldn't sit down at the table we wanted to as they saw something up above the hood. What was it? Oil from the fan. Not a good way to start the meal. 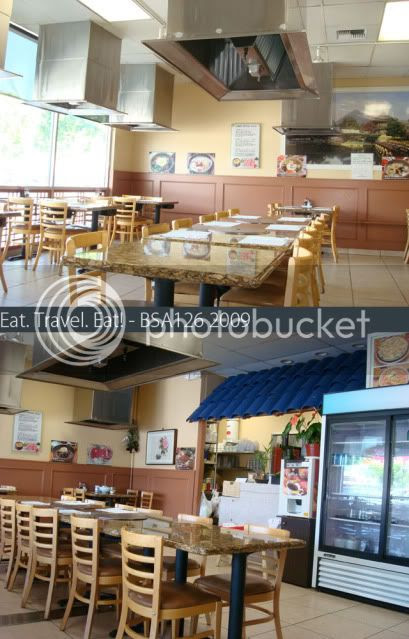 The interior has pretty much stayed the same, but now there is the fan problem up above the diners' heads. Again, it was very empty during our visit. When we entered, there was only one party which was leaving, and then we were by ourselves for most of the visit. When we were finishing up though two parties came in and had some food- one party ordered the all you can eat deal which made the restaurant very smokey as there was no fan turned on. We rushed to leave.

Service was pretty much the same too. Pretty friendly for the most part but you could certainly feel that they felt a bit weird serving such little customers. They all sat around at a table drinking from mugs and looked at magazines. At least they did take care of us and were friendly. 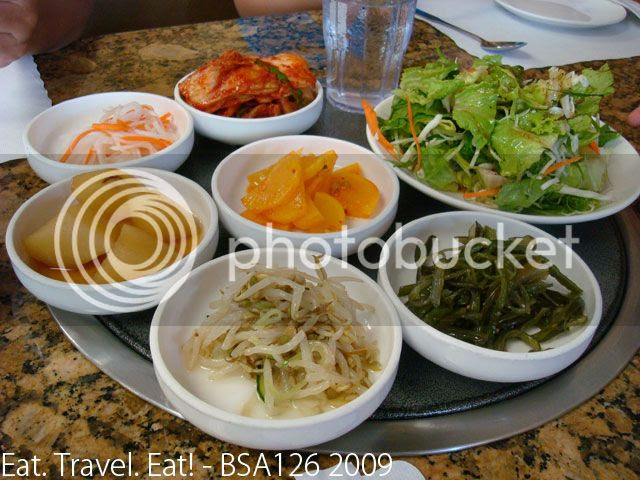 Soon, the panchan arrived and it was slightly different than what the previous Seouljung Korean BBQ offered. Cucumbers and the marinated gobo were missing, but the shredded pickled daikon and carrot as well as the kelp was added. This time around, the salad was properly dressed, and most of the items were very good. The kelp was a bit different than your usual Korean BBQ kelp, and it wasn't marinated in vinegar. Instead it had a sesame oil flavor (a bit) and tasted as if it wasn't marinated. We liked the potatoes and the bean sprouts as usual, but the potatoes weren't as soft compared to Seouljing.

What we ended up ordering for this visit were two combinations as well as a galbi soup, so that our visit could be a direct comparison to our most frequented Korean BBQ place: Young Dong Garden.

All of our items arrived at the same time, but what was placed first in front of us were the 2 plates of BBQ meat we ordered. 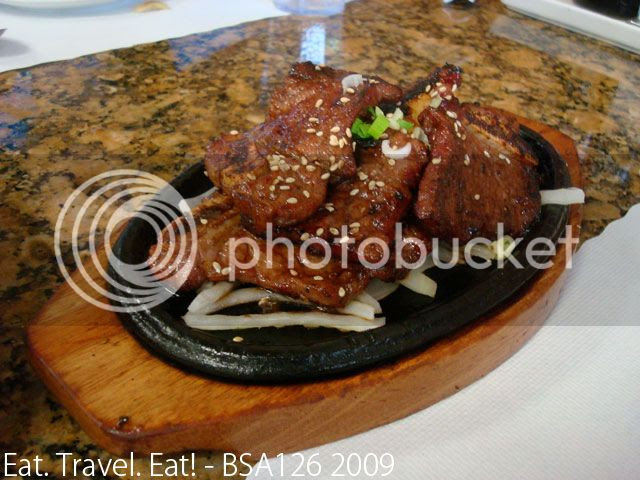 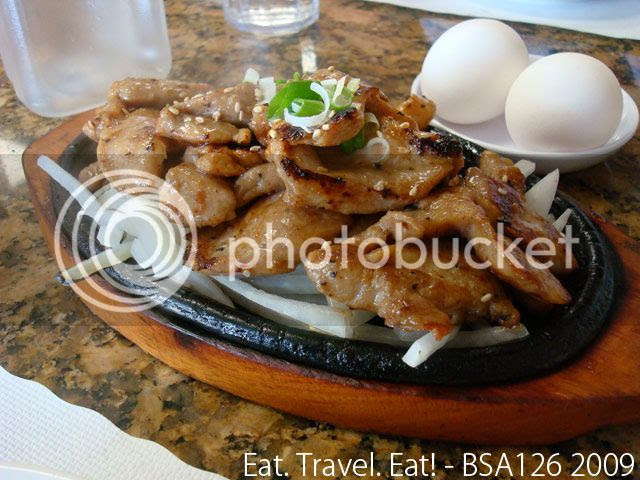 The tofu stews though were disappointing. They were missing a flavorful that we wanted and felt watery instead of flavorful. Even the spicy tofu stew felt watery. Ingredients were okay, but the lack of flavor pretty much ruined both of these tofu stews. 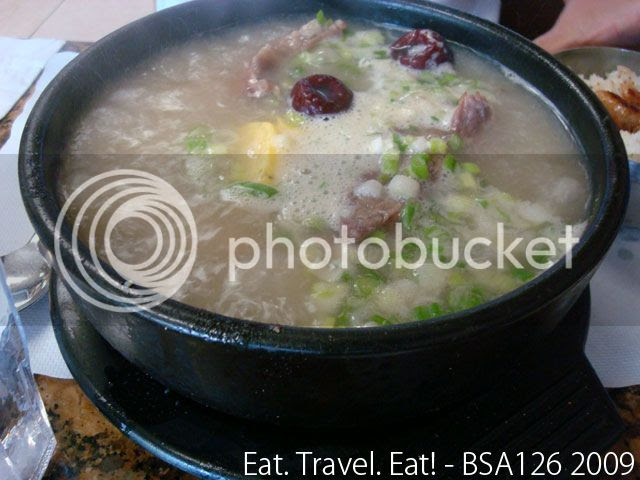 Kalbi Soup gave us a impressive first glance, with the big pot filled with lots of meat and other items. The soup also tasted pretty good for the most part, but wasn't as beefy flavored due to the addition of other ingredients like the jujube. I was liking it, until I had a bite of the meat.

The meat looked dry, which it shouldn't be as it was in the liquid. And the taste was horrible. It was the mix of freezer burn plus no beef flavor at all (usually the beef still retains some flavor even after long hours of cooking). Needless to say, we finished the soup, but didn't finish eating the meat.

Also, no noodles in the soup, so it didn't fill up our stomachs as much. 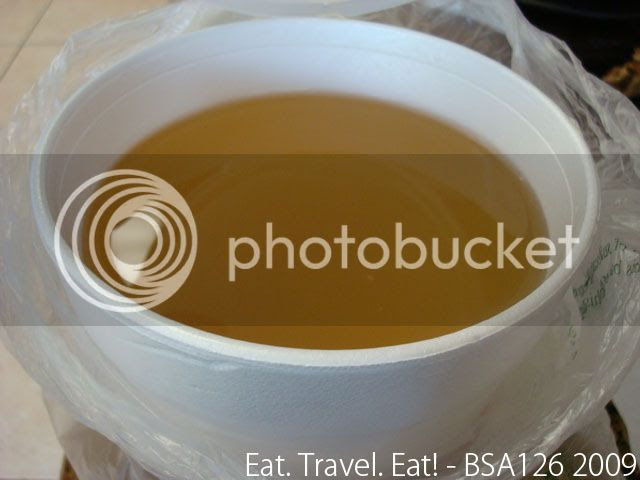 The meal ended with a free styrofoam bowl (pretty big one too) of a sweet fermented rice drink called shik hye (thanks for the information SinoSoul!) that was slightly sweet and cold due to the refrigerator that it was in. Seouljung Korean BBQ used to do this along with the addition of pine nuts, but the shik hye was served in small metal cups and not a huge styrofoam bowl.
Overall the meal was a borderline meal as to return back or not to return. And looking at the lack of customers and not so good reviews on websites like Yelp, it looks like many people have had the same experience as we had. The pretty much only good items were the panchan and the Korean BBQ meats, but with the oil and smoke smells and a freshness quality suspicion with the Kalbi soup, I don't recommend visiting here. I would much rather pick restaurants nearby like Full House or May Mei for a meal.

Shailendra Singh said…
This comment has been removed by a blog administrator.
July 10, 2009

If you would like an ad space please do not do it via commenting. Thanks!
July 10, 2009

SinoSoul said…
*sigh*
this place is yet another sign there are no good Korean joints in the SGV. the final chilled soup is shik hye. thanks for taking one for the team!
July 10, 2009

Thank you for the information on the drink at the last photo. I've changed the blog post to call the rice drink shik hye. Thanks again!
July 10, 2009

joanh said…
yeah. sometimes you don't know if when a place is just working out their opening kinks, or just a bad sign. unfortunately it just doesn't want to make you come back when there's too many strikes against them, right?
July 11, 2009

Novy said…
*sigh* you would hope that with a change there'd be some good points but it seems as though it's all gone downhill. Even the number of banchan has depleted.

Most definitely, unless if we do have a good visit and everyone else has a so-so visit. But for them it's been several months before we even visited them.

You're welcome! It's interesting how some restaurants go downhill. I didn't even notice the decrease in panchan in my photos; after I looked back I noticed what you meant!
July 13, 2009

foodbin said…
they should have adopted a powerful vacuum suction piping for each table.
July 13, 2009

They really should have instead of using those big fans on top! I've seen some of those suction things right next to the grill at some photos. Hang Yang should do that, but with so little customers it may not be good money spent for them.

Ooh...favorite Korean BBQ place in HK?! I've never visited one in HK yet. Do you mean Kim Mi which you reviewed? :) Probably will visit HK soon...hopefully winter or maybe next spring or summer!
July 14, 2009