July 22, 2009
After some so-so restaurant chain reviews here on Eat. Travel. Eat!, it is time for a better, more positive review on a small restaurant chain, especially since this is the 125th post and should be something positive rather than negative! And so, today's post is on a California restaurant chain that we like. It is great when we are in the mood for some good American food. 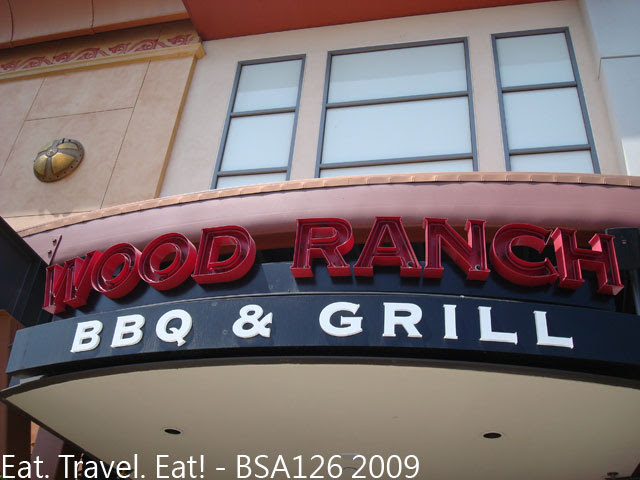 Located in the first recent expansion of the mall (Restaurant Square), Wood Ranch has one of the prominent spots there, and when you arrive at the mall you will see smoke coming off from their chimney. Next door is a kids daycare center and the Cheesecake Factory, which I hope to visit someday. 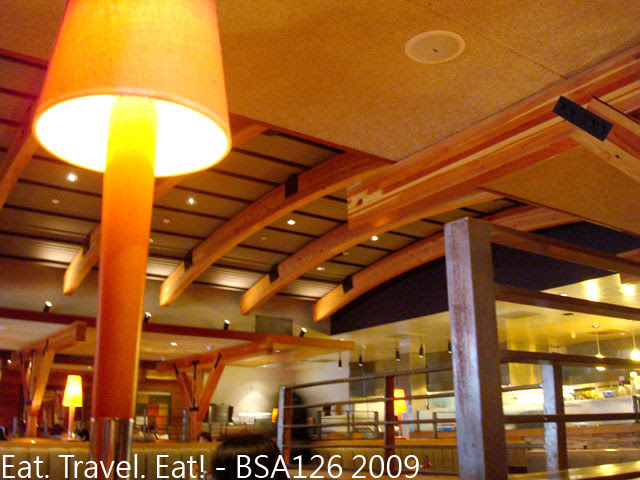 Entering the restaurant, you will find a large sitting spot if you are required to wait. Luckily, for this lunch visit, we did not need to wait. However, dinner is more busy, and we had to wait every time we came for dinner. You'll get a beeping buzzer thing which you get at other restaurants like BJ's and Outback Steakhouse if you do need to wait. 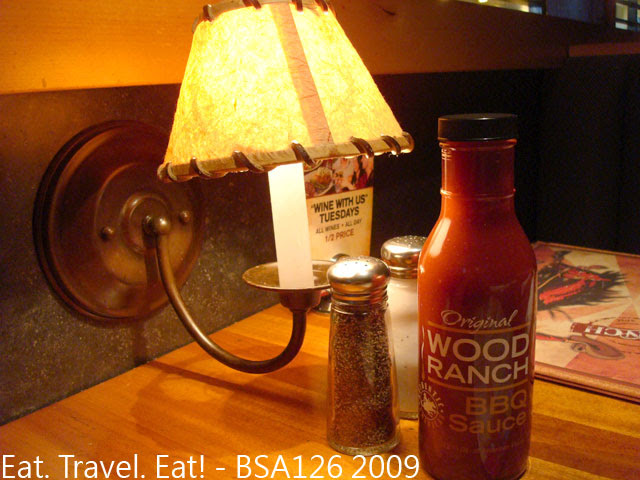 At the table, looking at some BBQ sauce, pepper, salt, and a lamp.

The interior is a bit dark near the walls of the restaurant; however there is plenty of smaller lights at each table as well as on the ceiling which make the dining experience much bearable. I just am not used to eating in very dark places. For a bright spot, get seats in the middle of the restaurant, which you see in the photo above this one. They like to spread out the customers throughout the restaurant so sometimes you may get a dark spot, or you may get a bright spot. This time we got a darker spot. 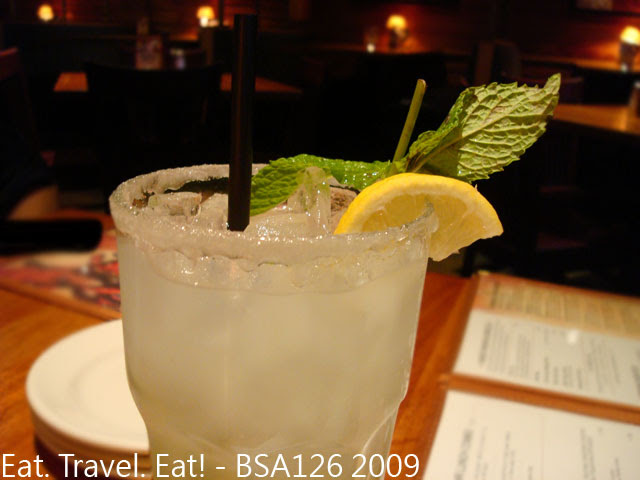 We started off with some lemonade (3.95 USD) which was decorated with a sugar rimmed glass, mint, and lemon. At 3.95 for lemonade, you definitely would expect something nice going along with it. This lemonade had a nice balance of sweet and sour and the mint when put into the glass added extra flavor. 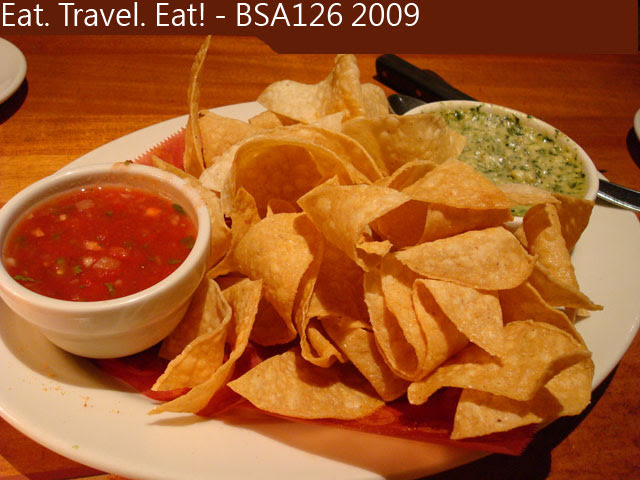 For the appetizer, we ordered some Spinach and Artichoke Dip (9.50 USD) which came with warm tortilla chips and a bowl of salsa. This dip was excellent. The chips were seasoned and were extremely warm (probably just fried), and the dips wewre very tasty. The spinach and artichoke dip was smooth with no big chunks of ingredients, and the flavors melded together so that tehere was no big substantial taste of one ingredient, which BJ's did not do as well. Salsa on the other hand had lots of juice in it, but at the bottom were diced tomatoes, peppers, and onions. We ate along with both of them. 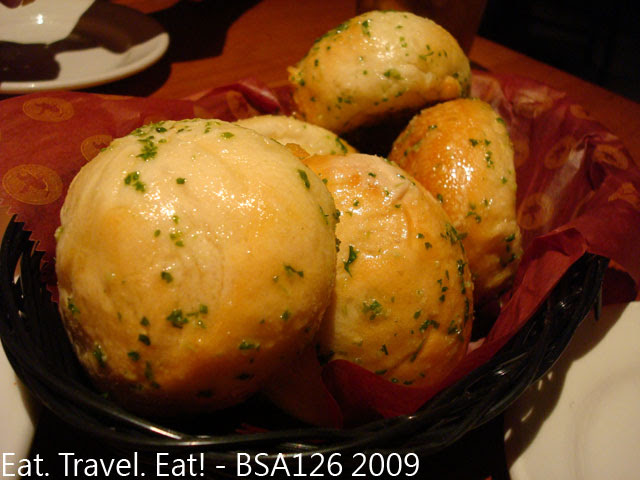 After we had gotten eating our appetizer for a while, the complimentary warm garlic butter rolls arrived. This is one of the things that is special about Wood Ranch; I have never seen these served elsewhere other than at WR. On the outside is a coating of butter, garlic, and bits of green (not very identifiable to me), and when you bite in, you get a soft interior with a slightly chewy and hard exterior. Sometimes I eat five of them by myself. I did that during my first visit to Wood Ranch by the way. Eat as much as you want, because refills of the bread are free. While waiting for our main entrees, part of one of my dining companion's lunch combo arrived, and it was the house salad. You can pick between soup or salad and my dining companion ordered the house salad with some ranch dressing. There was bed of romaine lettuce, and then the dressing came in. On top were chunks of tomato, house made croutons, and a few grinds of freshly cracked pepper. Nothing too spectacular with the salad, but the ingredients were fresh. Plus, the croutons were seasoned properly and definitely were made in house. No commercially made croutons here! 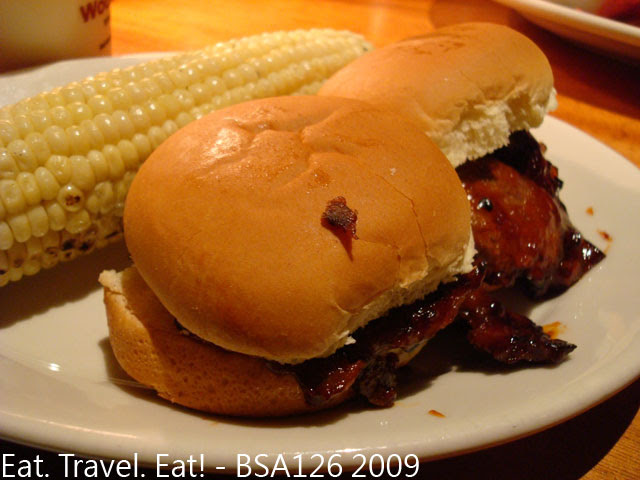 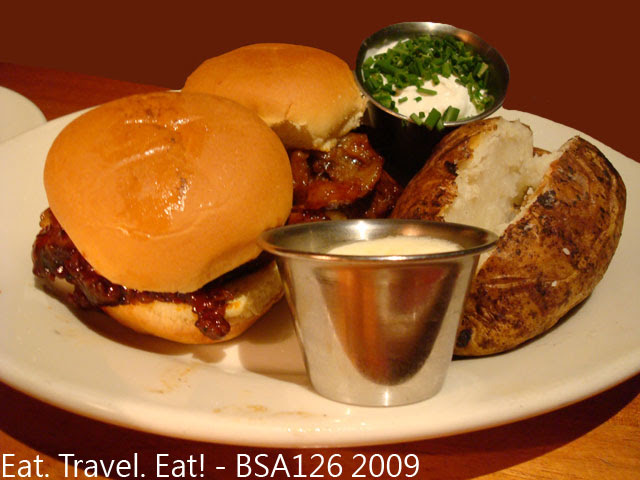 Lunch Combo Portion (10.95USD)
Our main courses finally arrived and the first dish that came were the WR Tri-Tip Sliders. On top you see the kids portion which I had, and the bottom is the lunch combo portion. Basically, there was no difference between the two. You get to pick your choosing of side, and so I ordered the corn, which was nicely grilled and not charred, because there was no baked potato option. However, the lunch combo portion allows you to pick the baked potato so my dining companion did so. WR's baked potatoes have a coating of some salt and oil on top and are cooked properly- not too hard and not mushy either. Butter and sour cream and chives were served on the side.

The WR Tri-Tip sliders on the other hand on both plates were fantastic. The meat portion was the same on both of the plates and the meat was firm but tender and juicy. There was just enough sauce to coat every piece of meat, and the BBQ sauce was slightly sweet and rich, but not overwhelming in flavor like those storebought BBQ sauces. The tri tip was served on lightly toasted sponge buns which were very soft but yet held up to the tri tip due to their light toasting. Both my dining companion and I were very happy with this dish. I highly recommend it. 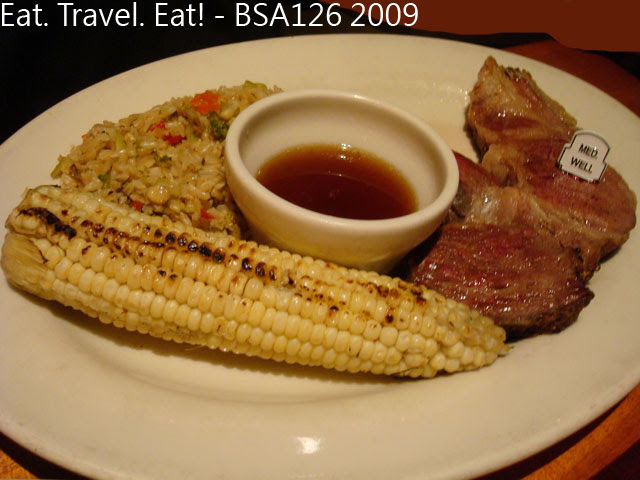 Another recommendation I would like to make is the prime rib (this one is 11 ounces and costs 23.95USD). It is on a bit of the expensive side, especially in Arcadia, but this is so scrumptious. Even at the medium well stage, the prime rib is so juicy and tender, and retains a beefy flavor, which most of the other prime ribs I have tried do not. The aj jus is freshly made and there is a huge difference between this aj jus compared to buffet aj jus. There is no comparison! So beefy and flavorful. You get two sides with the prime rib and so my dining companion had some rice and corn on the cob. 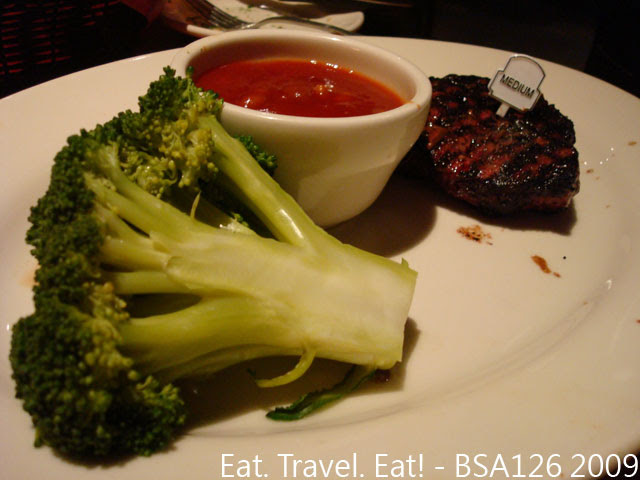 The only disappointing dish of the day was the top sirloin (19.95 USD), which was too charred for our liking. The sirloin was a bit dry for our liking as well, but it too also retained its natural flavor. Unlike places like Garden cafe, this sirloin was very thickly cut. On the side were the WR baked beans which basically are beans with their BBQ sauce, and broccoli. The broccoli surprised us as it was just one head of broccoli. We ourselves had to cut it down into smaller pieces. By the way, the broccoli had no seasoning to it, so we dipped it into the aj jus later on. Great flavor combination actually, even though if it seems weird!

Overall, a great visit here at Wood Ranch. Only one not so good item which we wouldn't have ordered anyway (my dining companion picked it as it was cheaper than the prime rib plus we did not want to get two of the same item...but now we will!). Their BBQ is nicely done, but a tad expensive for the price, especially in the full menu. If you ever bring kids there, get the kids menu. They will ask you even if your kids are way above the age limit, like me. The prices are much more reasonable plus the item portions, especially during lunch, are the same as the lunch combinations.

EatTravelEat said…
DessertObsessed,
Yeah, those garlic bread rolls are one of the things we go there just for other than the prime rib! The Stinking Rose sounds interesting- they would have to make the best garlic bread rolls. Otherwise, they can not be a "Garlic Restaurant"!
August 03, 2009

foodbin said…
wasn't the garlic bread a bit too oily? the meat with rice and corn on the cob sure looks juicy.
August 04, 2009

The garlic bread is oily only on the outside- inside it is all bread with none of the butter so with the two combined it works. But if you only eat the outside it is too oily!
August 04, 2009

jess said…
i know everyone's been talking about the garlic rolls, but they do look darn amazing....

you should definitely submit some of your photos to www.donteatthatyet.com. it's a visual restaurant review site with a template similar to that of tastespotting
August 04, 2009

EatTravelEat said…
jess,
Looks like a great website! But I'll need to resize my photos into 400px and not what I have already at 640px in order to post my photos on there.
August 04, 2009