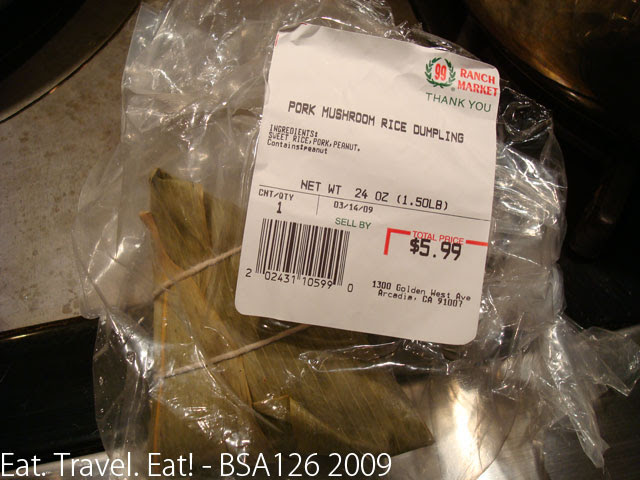 (You can see how behind I am in writing out posts now! This product's expiration date: March 14, 2009.)
Rice dumplings are a holiday food but are also available year round at Asian supermarkets, as well as in Chinese restaurants. Pre-made rice dumplings are quick and easy to eat and can be transported for eating at work or at school.

Usually, these rice dumplings go for more than 2 dollars per rice dumpling at restaurants like Full House (no, not talking about Lor Mai Gai), but they go for less at the supermarket. We like 99 Ranch's rice dumplings, and each package comes with 4 dumplings (so then 1.50 each) for 6 dollars USD. 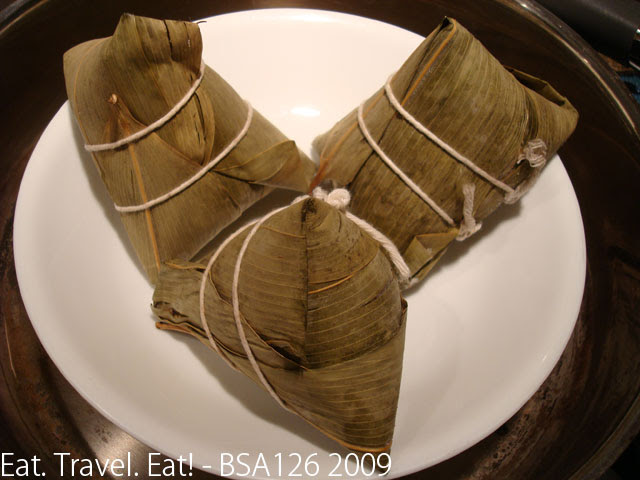 After buying them, we keep them in the freezer for long term storage, and when we want to eat them, they go into the steamer, which you see ours above. Now, you may be thinking, "What is this weird contraption?" Well, if you read my post on Mixed Seafood with Tofu, you have seen this "steamer" before. To recap from before, it is a deep frying pan which we then put a small rack which fits into it. Next, we add approximately 1-2 cups of water, and we put what we want to steam on a plate on top of the rack. Easy and simple. You don't need to buy a special steamer.
And after the sticky rice starts to ozze out, the rice dumplings are done steaming. And so, we take them out of the leaf: 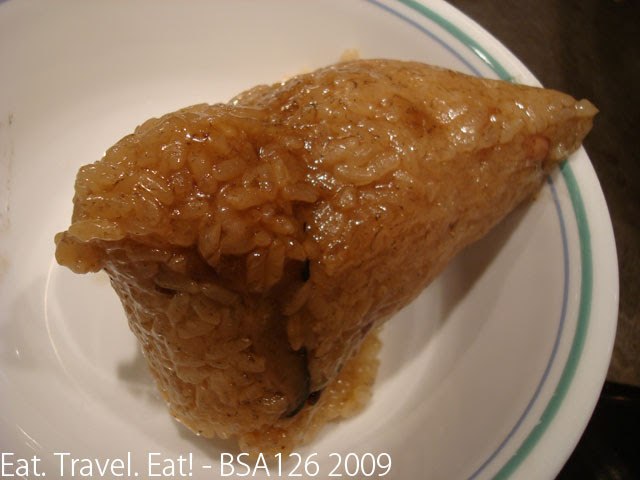 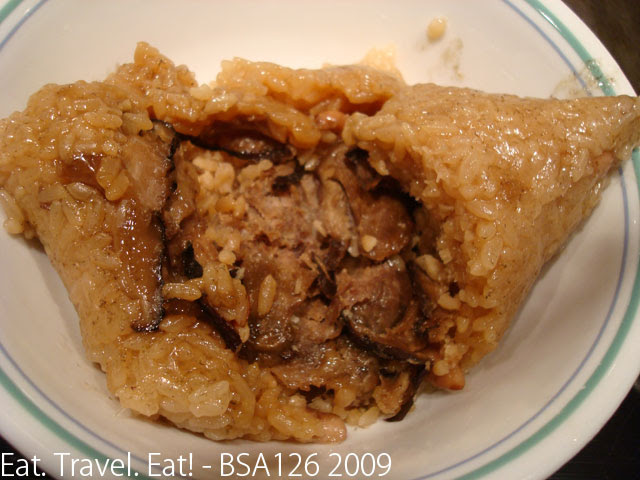 All the major ingredients as listed in the ingredients list were in the pork and mushroom dumplings: peanuts, pork, mushrooms, and sticky rice. However, the flavorants were left out of the ingredient list. There was plenty of all of the major ingredients, especially with the pork. In general, the rice dumpling was very nicely seasoned, and even had some of the flavor from the leaf, which is a good sign. The pork was in large pieces, and we shredded them as we ate along. Mushrooms in the dumpling were sliced and looked like previously dried shitake mushrooms. There was also a handful of peanuts which were tender around the rice dumpling.

One of these pork and mushroom dumplings, along with some vegetables, pretty much makes a meal! The amount of sticky rice is enough and fills you up quite quickly, and the amount of pork is just the right amount of protein for a meal. Along with some vegetables, a meal with one of these sticky rice dumplings is a well balanced meal. It is just why these pre-made but tasty rice dumplings are so convenient for meals...whether it be on purpose (for a quick lunch), or for a celebration.

noobcook said…
I love rice dumplings. Over here, there is an abundance so we get them fairly cheaply. I love the Nonya type, as well as those with chestnuts and egg yolks :D~
September 08, 2009

foodbin said…
the dumpling looks firm, if salted duck egg are added-it would be even more flavorful.
September 09, 2009

EatTravelEat said…
noobcook,
You are so lucky! We have to settle with what restaurants have. I've never tried a chestnut and egg yolk rice dumpling before.

foodbin,
Salted duck egg? That would have been interesting. But again... I have never seen anyone add this ingredient into a rice dumpling before.
September 09, 2009

Unknown said…
We get our rice dumplings from the local market here in Chiang Mai. They come with with salted duck eggs too. Yum! ....and we also freeze them, but being lazy people (or perhaps, hungry!) we pop ours in the microwave for 2 minutes. : )
September 11, 2009

EatTravelEat said…
Alice,
We do the microwave cooking too! But if we have the time we steam them though.

Mochachocolata Rita,
Haven't seen a pale colored rice dumpling for a long time with the exception of the sweet ones!
September 12, 2009

joanh said…
mm.. yeah, we usually get them with salted duck egg yolk too.. have you seen/eaten the sweet ones with red bean inside? i like the salty ones personally.
October 04, 2009

EatTravelEat said…
joanh,
Yeah, I have eaten the red bean ones before but it's been a long time since doing so! I still like the salty ones better. The flavor of the leaves in the rice pairs up better with the salty fillings.
October 04, 2009