September 05, 2009
One of the things that keeps us coming back to our local Fresh and Easy other than its convenient location and store layout is their Today's Special area. Unlike other markets like Ralph's or Trader Joe's, Fresh and Easy displays all of their older inventory that is about to be past its due/expiration date in a special area which is easily accessible and shown to everybody (and not hidden behind a counter or a hallway), and a special red tag notifies the customer of a new reduced price which is 25-75 percent off the regular price. At the beginning of Fresh and Easy's concept of displaying old produce, people actually would crowd the area to see what they could get; after all, the fridge for the Today's Special section was packed with items. Not were the prices only exceedingly cheap when compared to even markets that had cheap produce (like Dogwoods also on the same street in Monrovia), the produce was still edible for at least several days, and depending on the item, weeks. Even for bread, the day the bread molded was at least 4 days after the best buy date. This made us wonder how long conventional supermarkets put their produce. 1 week? A month? That just could be, according to our findings. A pack of organic roma tomatoes which was on sale for 50 percent off at Fresh and Easy still did not rot after an additional 2 weeks in the fridge at our house.

But as Fresh and Easy progressed along the months (and got smarter- less coupons and the coupons require a larger minimum purchase), the inventory of the Today's Special section dwindled, and at times, almost empty with only 10 or less items on the shelves instead of 50. Instead of produce, what was the bulk of the Today's Special inventory was F&E's convenience foods, dairy, damaged produce, and meat. However, routinely there was (and still is) plenty of the good produce available. And on Thursdays to Saturday, the deals primarily focuses on...bakery items, which I have said before, still last extra days after the best buy date.

Bakery items like baguettes, cakes, cupcakes, demi baguettes, donuts, french bread, sourdough, and the like appear on the racks on Thursday to Saturday. Always a wide selection for some reason! Especially with the baguettes. And so... 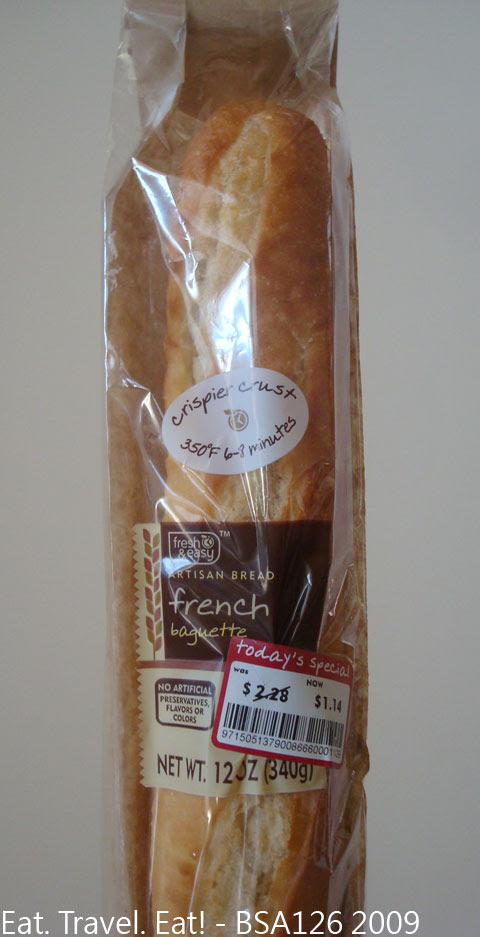 We decided to try out their French Baguette and was not expecting much from it. At 1.14 USD, it was 50 percent off from the original price. One time, we even bought this long baguette for 54 cents. Think about it. 54 cent probably only pays for the energy that needs to be applied for the bread to let the bread rise and bake! A steal. Anyway, now this French Baguette has gone back up to 1.14USD for the Today's Special price. Still a good deal in any way. 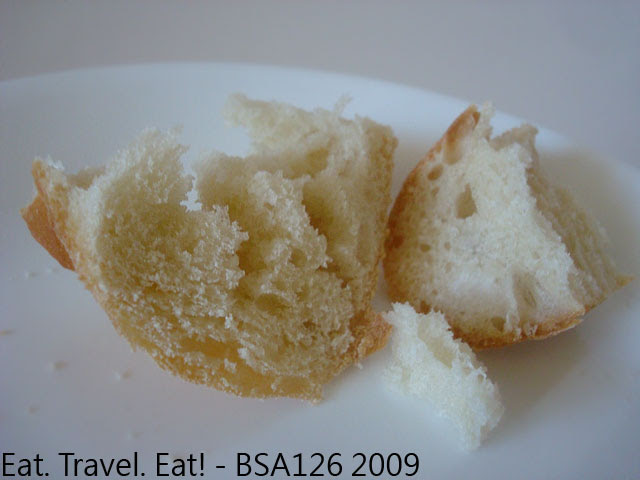 (This photo makes the baguette look drier than it actually is)
After purchasing the baguette we cut the portion we wanted to eat at the moment (then sliced the portion into personal slices) from the baguette and followed Fresh and Easy's directions for the crispier crust. Then, it was taste test time!

The crust was a bit thick and slightly chewy, but mainly crispy where the bread was exposed to the heat source. The interior of the bread was moderately chewy and soft, which we expected. Unlike Ralph's French Bread, Fresh and Easy's French Baguette retained its moisture even after cutting the bread up. With Ralph's French Bread, the bread dried up the day after; almost rendering the bread useless for eating purposes.
Overall, Fresh and Easy's French Baguette was very good especially since it was on the Today's Special rack! It might have even tasted better if we bought it when it was freshly produced. However, the baguette was certainly not as delicious compared to places that specialize in making bakery items like baguettes. For a supermarket bread though, we were pleasantly surprised.

EatTravelEat said…
Selba,
Which is what we did :). But cream cheese seemed to be the better choice as the baguette melted the butter before it went into our mouths.
September 06, 2009

foodbin said…
i had baguette the other day with leftover fishmeat and chopped onion-best.
September 09, 2009

EatTravelEat said…
foodbin,
Fishmeat and chopped onion sounds fabulous on a baguette :). I ate baguette with some stewed meat. That was good!
September 09, 2009