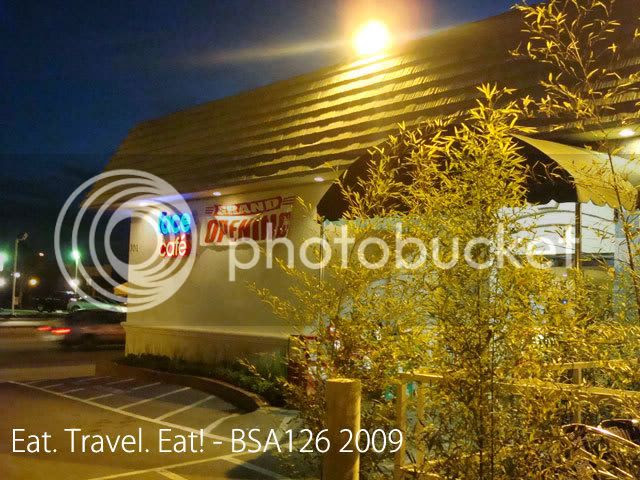 (Yes, this is an old photo. Bad watermarking as you can see. Plus, no more Grand Opening sign now if you visit, and there is a new logo with the Face Cafe logo in Chinese)

Following on my list of cafes and Hong Kong style food in the SGV area is Face Cafe. Earlier readers would know that I did not have such a positive experience on my second visit. Improvements have been made of course between my last review and this review however, so today I am here to tell you about improvements and other items on the menu.

Basic improvements that have been made include the inclusion of take out menus for all parts of the day- breakfast, lunch, and dinner. Also, there is a new suggestion box nearby the cashier's desk. I am tempted to put the link to Eat. Travel. Eat! into the suggestion box but have not yet. If I do decide to put it in, I will do it myself :). 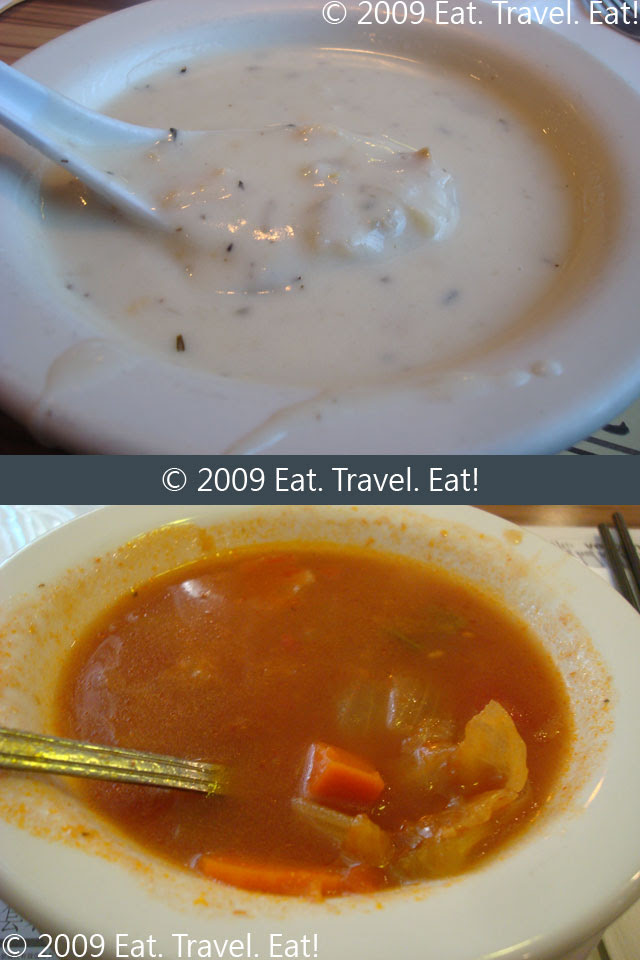 Side note: Be prepared to be annoyed by the constant watermarks. You see, I was angry and decided to put watermarks all over after my photos were used on other sites back in August when I was editing my photos for this post. Surprisingly, one on site the photo used was not related to the topic (How does my photo of Green Island in Temple City, CA become applicable to Cathay House in Las Vegas, NV?). Thank BzzAgent and Nextstop for spurring my mind...
Sorry for the rant and I most certainly apologize if you are annoyed and tired of seeing my watermark multiple times by the end of this post. Anyway, as you can see, Face Cafe has soups- but these soups are FREE during dinner (have not still been to Face Cafe during lunch). Both soups- the clam chowder and the minestrone soup- were flavorful and tasty. The clam chowder was a bit different compared to the normal free soup offerings at HK cafes, and it had plenty of clam meat and was slightly peppery which I liked. Minestrone soup was tomato-y and had multiple chunks of celery, carrot, beef, and onion which added more flavor. 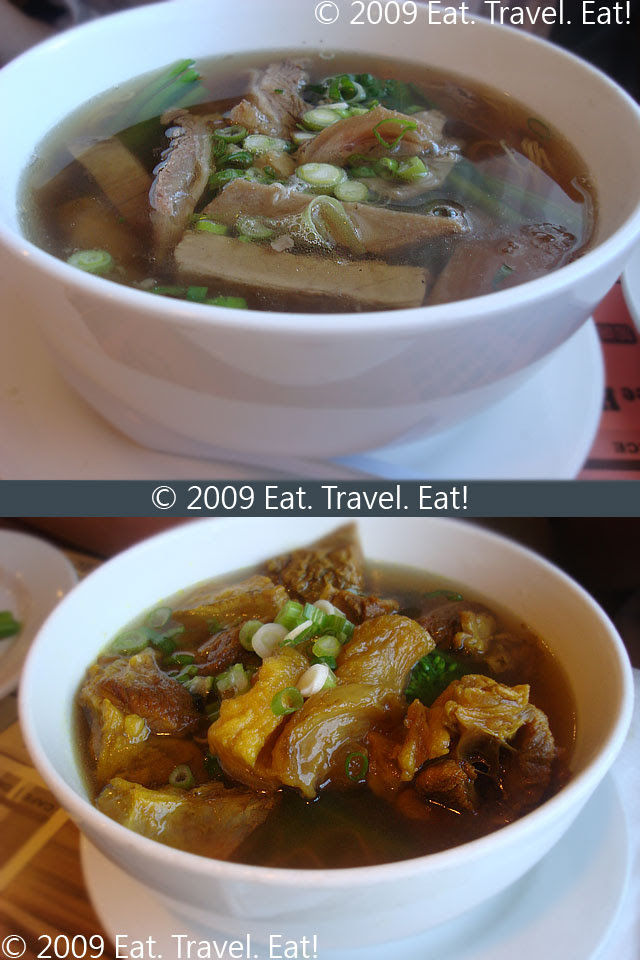 How about I start with noodle soups for this review? Anyway, here you see two examples of beef brisket with thin egg noodle soups. The top one is what you would get normally- choy sum, a clear beef broth, chewy thin egg noodles, green onions, and slow cooked pieces of brisket (that are not hard to eat unlike on our second visit). However, the photo below with a yellow tinge to the beef is a curry beef stew noodle soup. We were longing for tendon in our noodle soup and the friendly employees suggested if they could use the beef for the curry for the noodle soup, which would have tendon in it. End result was quite delightful surprisingly. The beef broth which did not have too much flavor by itself already got bumped up in flavor with the addition of the curry beef stew. 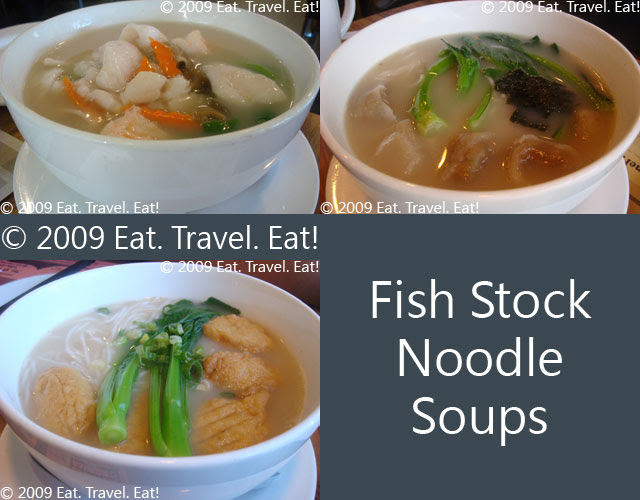 (I count the watermark 7 times in this photo above)
I know I wrote that the fish broth noodle soups were not that "great" as I expected on our second visit, but we still order the dish still. Pretty much the same still- a light fish broth (think what Red Ant Cafe had with their macaroni fish broth soup- that I did like very much...so you see my opinion has now changed with this fish broth- it is pretty good too), chewy and bouncy rice noodles, and pleasant toppings like fish puffs, seafood, and other toppings. 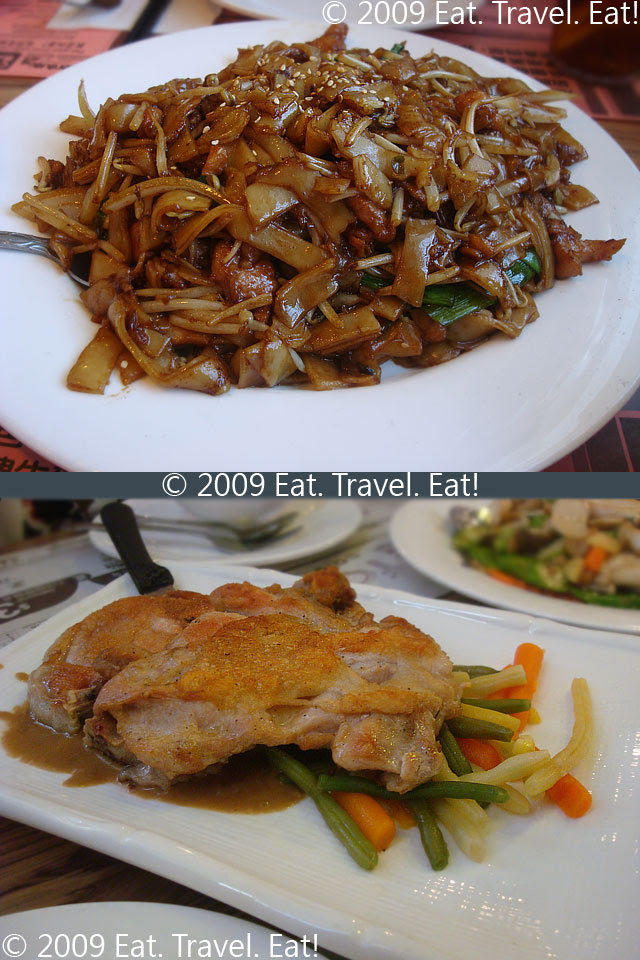 We are now bridging onto entrees now, but how about we first transition with Chicken Chow Fun with Swiss Sauce? At first I thought Swiss Sauce was going to be a cream sauce. I was wrong. Swiss sauce was actually a sweetened soy sauce as I learned as I was eating as well as reading Mochachocolata Rita's post on Tai Ping Koon in Hong Kong. So, the Chicken Chow Fun with Swiss Sauce had a pleasant sweet and salty taste to it which I enjoyed. The thick rice noodles were also chewy and smooth which I liked- no clumping or mushy taste which is what you get with overcooked rice noodles. Bean sprouts and green onions added a nice textural and flavor contrast.

The Mix Grill plate you see on the bottom photo above was ordered due to its value. The addition of one extra piece of meat was only a dollar (if I remember correctly), and since I was not too hungry and wanted to share, I ordered the Mix Grill of chicken cutlet and pork chop with mushroom sauce. This was very good, but I would have liked it even more if Face Cafe had given more mushroom sauce and placed the sauce on the side (because I like the crunch from the searing of the meat). Also, the vegetables did not look enticing at all to eat and tasted like canned food. However, the majority of HK cafes do like to put canned/frozen vegetables on their meat plates. I would have liked veggies like cucumber and zucchini more though. The meats were flavorful and had plenty of their original meat flavors unlike some places where meat tastes nothing like what it originally was. 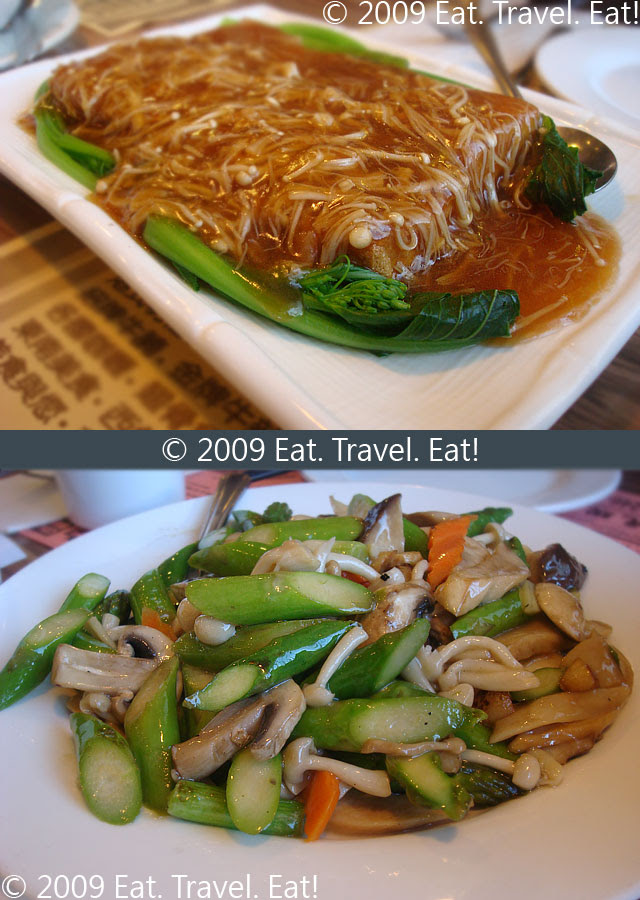 (Like the blur effect on the tofu dish? I wonder how the blur would have looked if the image was captured on my new camera)
And now we move onto dishes that are not as filled with meat. Above you see the fried tofu with golden mushroom (enoki) and dried scallop and asparagus with mixed mushrooms. Personally I like both of these dishes- after all my dining companions have ordered these dishes twice consecutively already. The fried tofu was silky and had light crisp on the outside, and the dry scallop and enoki mushroom sauce is mouthwatering and pairs so great with rice :). On the other hand, the asparagus with mixed mushrooms (buna-shimeiji, button, king oyster) is a tasty vegetable dish with a light garlic and broth flavor to it (think the fresh cooked entrees at buffets at Morongo and Gold Coast). Only problem- once I got a dirty button mushroom that was coarse on the bottom. As one of my mentors would have said, it was "interesting". 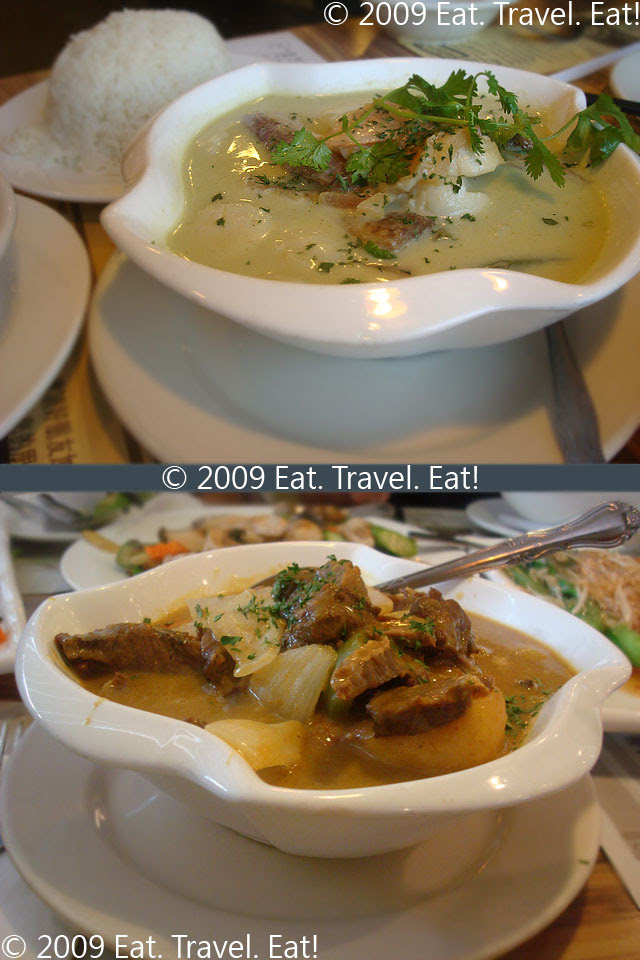 To round out this post are two varieties of curries. Unfortunately, my dining companions and I were not happy about both of these dishes. The top photo is a Thai green curry with scallop and eggplant. It would have been a tasty dish, but it had too much of a sour and lemongrass flavor which overpowered the dish. Plus, the curry sauce was too spicy for our tastes (they did not even ask what level of spiciness we wanted). Drink up on the tasty iced lemon tea! At least the veggies and the scallops were okay- plenty of them too.

The bottom photo of the set of two above is a Hong Kong style beef stew curry. Definitely not comparable to Tasty Garden's delicious beef stew curry. There was way too much beef stew, which for this dish was yucky, as the beef stew had no flavor at all to it. It basically tasted like if you cooked the beef for a broth for hours and then took it out to eat with some curry sauce. Otherwise, the rest of the dish was pretty good (onions and potatoes) but a bit salty for our tastes. 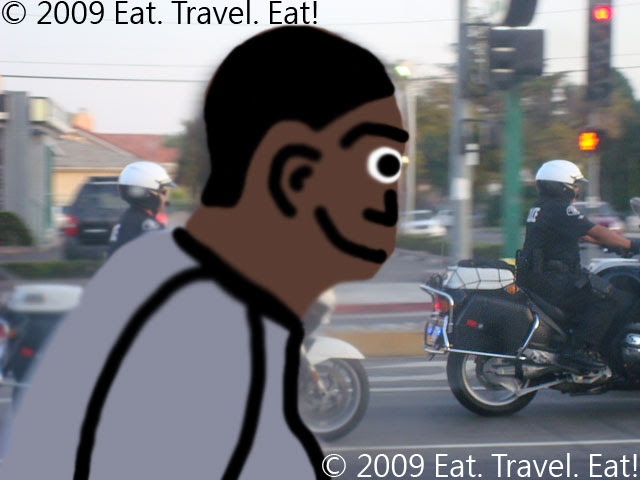 Now what is this? I was trying to take a photo of a long line of motorcycles which were stopped while I was eating. However by the time I took the camera out, the motorcycles were moving. When I snapped the photo, an innocent civilian on a bicycle passed by, taking center stage in the photo. :)

noobcook said…
wow free soups! The curries look nice though you mentioned didn't quite like it. I may like it more coz I love spicy foods haha
October 26, 2009

tigerfish said…
Look that the extensive variety in the menu offering...wow!
October 26, 2009

KirkK said…
Hey ETE - The food looks pretty good. It's great that the place has improved as well.
October 27, 2009

EatTravelEat said…
noobcook,
Free soups are always great :). Plus the portion is not small either.

tigerfish,
There's still a TON of items I haven't tried yet! Just a reason why HK style cafes are so great.

Kirk,
Always great to see improvement in restaurants :). Sadly usually it goes the other way around for a while though.
October 27, 2009

Unknown said…
All the dishes look great. The Green Curry looks rather pale though. Here in Thailand, it's bright green! hehe.
October 29, 2009

Unknown said…
wow, you are so blessed with authentic hong kong cuisine there :)

i was so wrong about swiss sauce too, i thought it would involve cheese somehow :p
October 29, 2009

Mochachocolata Rita,
SGV is very lucky to have such a wide variety of authentic cuisines available to eat at hearts content! Haven't been to anywhere else with so much variety.
October 29, 2009