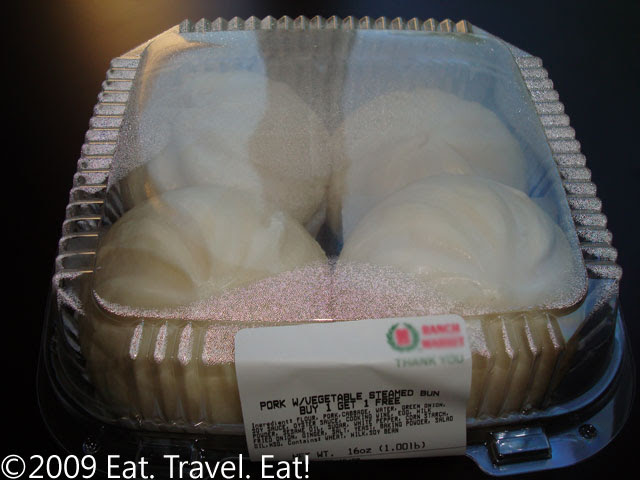 Have you tried these before, people in the US? After all, these are getting quite popular as a sales item in California anyway. Usually bundled in packs of two, meaning that you get eight large baos, these are a good deal these days. Before they used to be 3.99- about a dollar per bao. Then it went up to five dollars. Now it is back down again, usually at two packs for five or 3.29 for one box, so it is quite an affordable deal. They make portable, simple lunches anyway which is perfect for school or work.

We used to shy away from these baos a lot, because their fillings were weird. Think about a very loose meat filling that didn't even feel like it tasted like meat. I would question what comprised about that filling. So, since that filling was the norm, we stopped buying these 99 Ranch Market bao. After all, there were places like Noodle House (now closed, a restaurant that was featured by Jonathan Gold), that had the baos for 1 dollar each. Why not go there instead?

This deal though was too good to pass up, so we went for it, not thinking there would be any change. 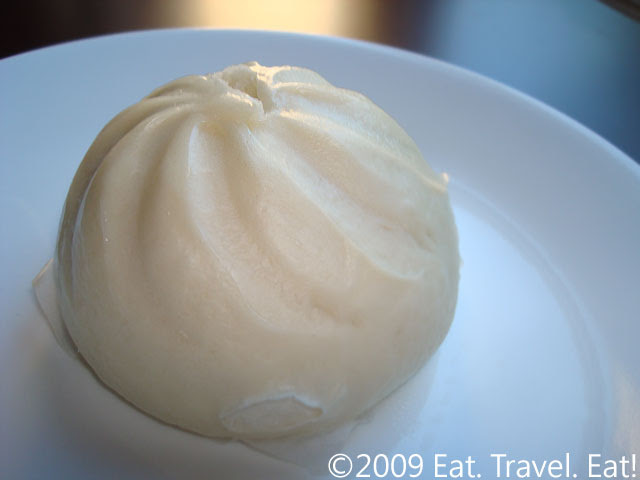 Ah, a machine made bao sunning itself in the weekend morning sun. What a nice photo. Not.

Quite easy to heat up anyway. I typically just add a bit of water to the top of the bao and then shake the excess water off so that the bao is not too dry after half a minute to a minute in the microwave. You can of course steam them too to heat them up. I usually steam on the weekends, but microwave on the weekdays due to my schedule. 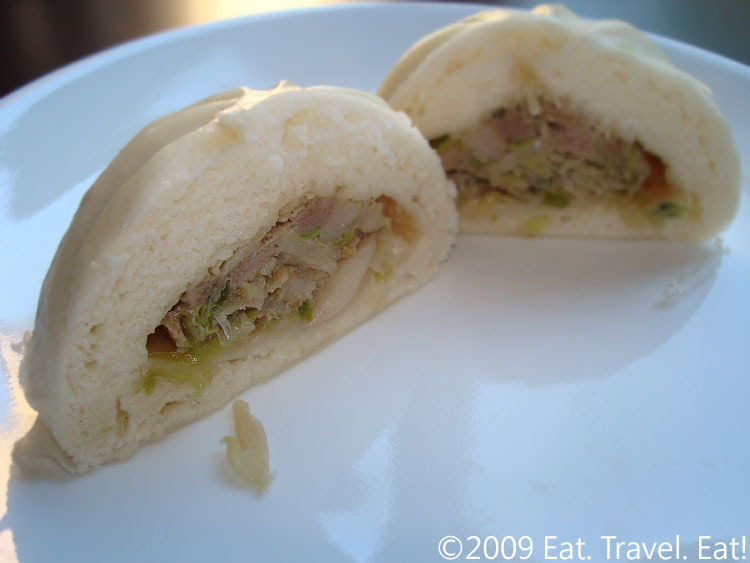 Cut up into half, you can really see the difference between the old version of this bao and the current version. Before, the meat was very light colored- pinkish, with a very dominant wine fragrance to it. Now, it is a bit darker in terms of color and the filling is firm.

Along with the meat there is plenty of cabbage. According to the package, oyster sauce, soy sauce, and wine (along with some MSG too) were used to flavor the filling, along with the standard pepper and salt.

As for the taste, you will not fine a flow of juice coming out from this bao but plenty of flavors from the seasonings and wine. The bread is soft, but after eating this for at least 10 days at school for this school year, it does get pretty boring after a while!

Speaking of school lunches- this is a good item to bring along as it is small, but the odor can be quite annoying (I just leave it in a zip bag in my backpack). I do not know what to describe it as- it does not smell like bread though! Just wanted to let you know.

---
Next post...the Arboretum! Due to the fact that Josh, a college student, requested for some photos. I'd thought it was time anyway.

And after that, curry chicken recipes. Thanks Fresh and Easy for the low chicken prices...

After that, a conference in Irvine- three food reviews and a hotel review. Want me to combine them into one post or separate them out?