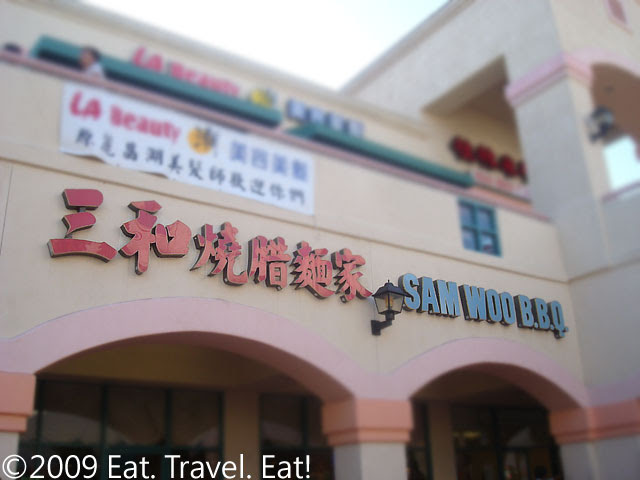 *Hope everyone is having a nice Veterans Day in the U.S. I have the day off from school so I decided to write this post now instead of on the weekend. That means you get another post this weekend, but it is easier. Garden Cafe with 1 visit*

Sam Woos are all over the place. When I started the blog last December, I wrote about the Las Vegas Sam Woo, one of the "highly" suggested places for Chinese food. It used to be pretty good more than two years ago. But our last year's visit proved it was bland and of low quality. Sigh. Another place gone to eat. Looking back at last year, it looks like I could control my POV of writing either...

It's no wonder why I constantly say on Tripadvisor the San Gabriel Valley's Chinese food is better. And yes, Sam Woo BBQ in San Gabriel, CA is MUCH BETTER compared to the Las Vegas location.

Although Sam Woo may be a quick "fast food" type of joint with rapid service and affordable food, the food is pretty much good for the most part. Sam Woo BBQ was one of the restaurants that I would visit constantly during my childhood- after all, it was a short drive (now for us it is another extra 15 to 20 minutes), and the food was not only affordable but delicious. Sam Woo was our May Mei back then- a good restaurant for take out and for dining in- but that was until we moved. 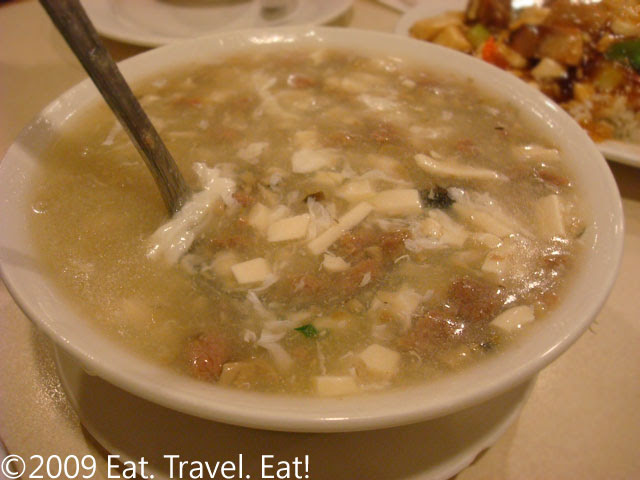 So after we moved, Sam Woo was a rare visit. However, we recently had to drive to San Gabriel more often, so we decided to hit back at Sam Woo again- once for a real meal, and once for a take out. 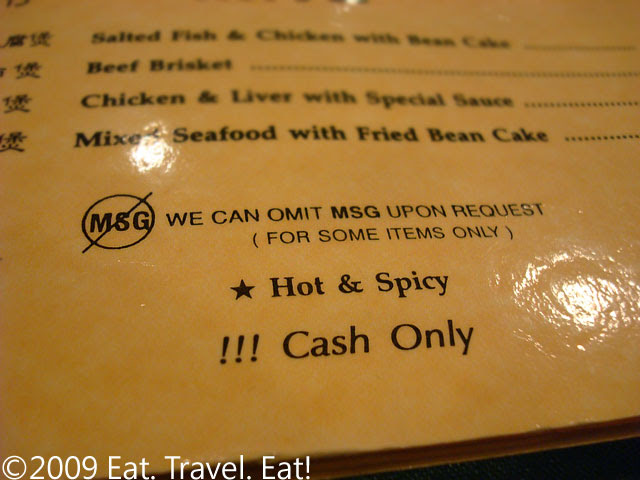 Above are the main precautions you need to know about Sam Woo. Yes, you can omit MSG, and yes, like May Mei, Sam Woo is cash only. After all, with the low prices, if you paid by credit card the credit card companies would take a significant amount of profit. 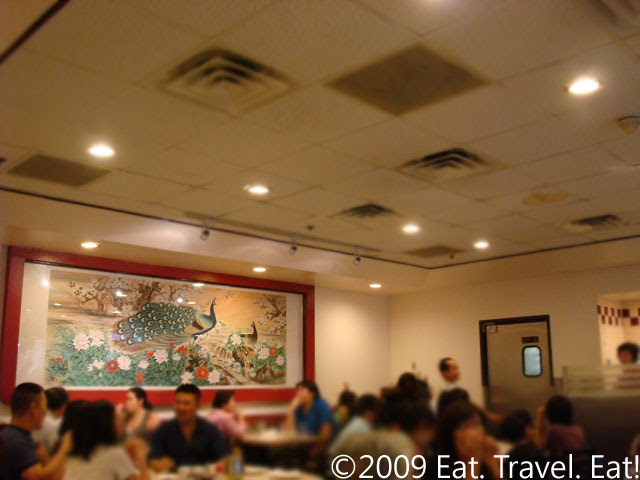 The interior is quite simple and bland. No pretty decorations at Sam Woo other than the peacock drawing you see in the photo above. When you enter Sam Woo, first you'll notice a take out area with all the BBQ items displayed in a window- like roast pig, et cetera. Usually, this area is where customers wait for their spot, and for our dining in visit we had to wait for about 30 minutes. Yes, Sam Woo does have a large customer base. So, we waited outside while I went inside and out, looking at the actions of the employees. Here is what I noticed:

1. The stereotype of the rice being recycled is FALSE here at Sam Woo. The rice pots after a customer uses them are then dumped of the rice. However, fresh rice is then refilled back into the rice pot, but the rice pot (or spoon) has not been cleaned.

2. Is the action of the chef using his wiping cloth to wipe his hands and other items true as seen in a sushi video that I mentioned in my Maki and Sushi post? Digustingly, yes it is at Sam Woo. I saw the employee cutting up the char siu for a customer's order and he wiped the plate with his wiping cloth- which he also used to wipe his hand and the counter. Then he placed the char siu onto the plate, and soon enough that plate was on the customer's table. What are restaurants now? Not everyone is sanitary anyway. Like how in Anthony Bourdain's show, a chef in a expensive restaurant is captured with his delicate hand work for plating- with dirty hands that had dirt in the fingernails.

Rant over, let's talk about food now. Soups are a great way to start a meal, and Sam Woo serves large portions at again, very low prices- lower than May Mei. This bowl could serve about 10 people with everyone having a small bowl of the soup! West Lake Beef Soup, which is served with cilantro, diminutive pieces of tofu, egg whites, and mushrooms is our standard order for soup when we go to Sam Woo. It is savory and a simple dish, but very warming and perfect for any cold day. Cilantro adds a nice brightness to otherwise a simple savory soup. 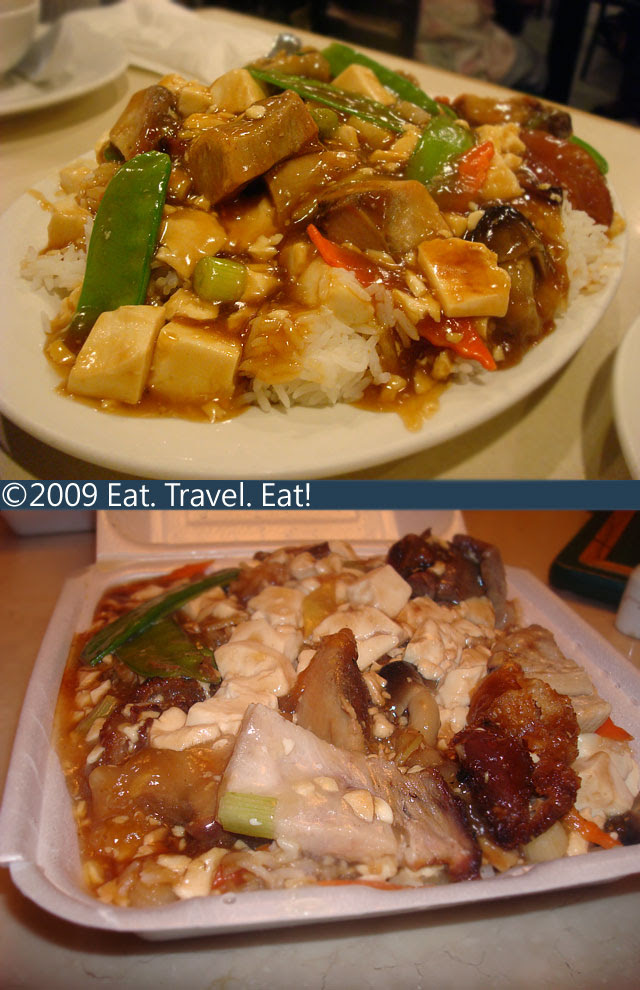 The one item that I was interested in ordering while looking at the menu was this: Roast pig with tofu rice (price was less than 5 dollars I believe). All of Sam Woo's rice plates are GIANT even with their low prices. Sam Woo back then amazed me with the amount of food for the price. Now, with the rise of costs, it is even amazing they still give so much. As you can see, the dish is also again pretty simple- a bed of steamed rice is topped with a brown gravy with savory, crispy roast pork, silky blocks of tofu, carrots, pea, and green onions. Unlike the Las Vegas Sam Woo, we did not find any bland flavors here. The gravy was nicely seasoned, and the roast pork added concentrated pork flavors to the dish. Eaten fresh, the pork still had a crisp skin to it, and also offered a porky layer of delicious fat, as well as meaty pieces of lean pork. Yum! 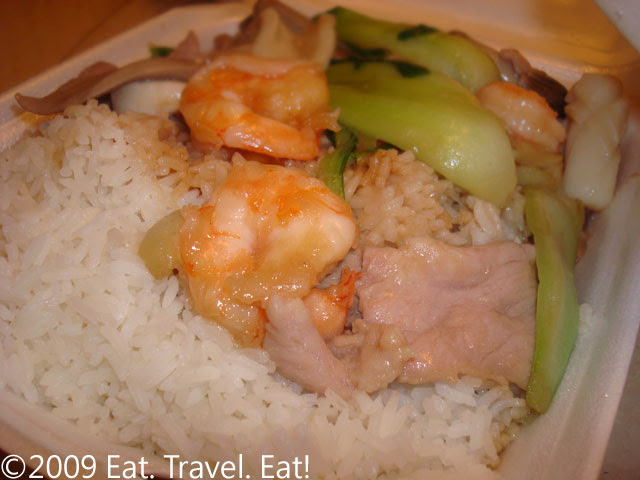 On the other hand, we did not really enjoy this mish mash of seafood and meat on rice. There was seafood and pork, but only on half of the rice. Really? I'd rather see a price increase than pay five dollars for something with only bits and pieces of shrimp, squid, pork, scallop, and veggies. Plus, it was fairly bland in flavor as there was very little of the gravy. 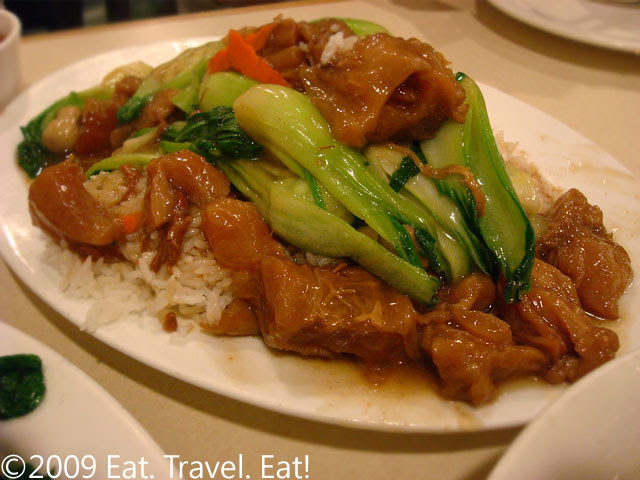 However, this plate of Beef Tendon Rice was delicious. We requested our waiter for the beef brisket to be changed to beef tendon and he said, "Of course" to our request! How nice. Like May Mei, the dish came with plenty of beef tendons, but had more bok choy (not choy sum). The gravy that the beef tendons were cooking in were also lighter in terms of flavor, but not enough to call the dish bland. Beef tendons were also very tender just like May Mei. I'd order this again. 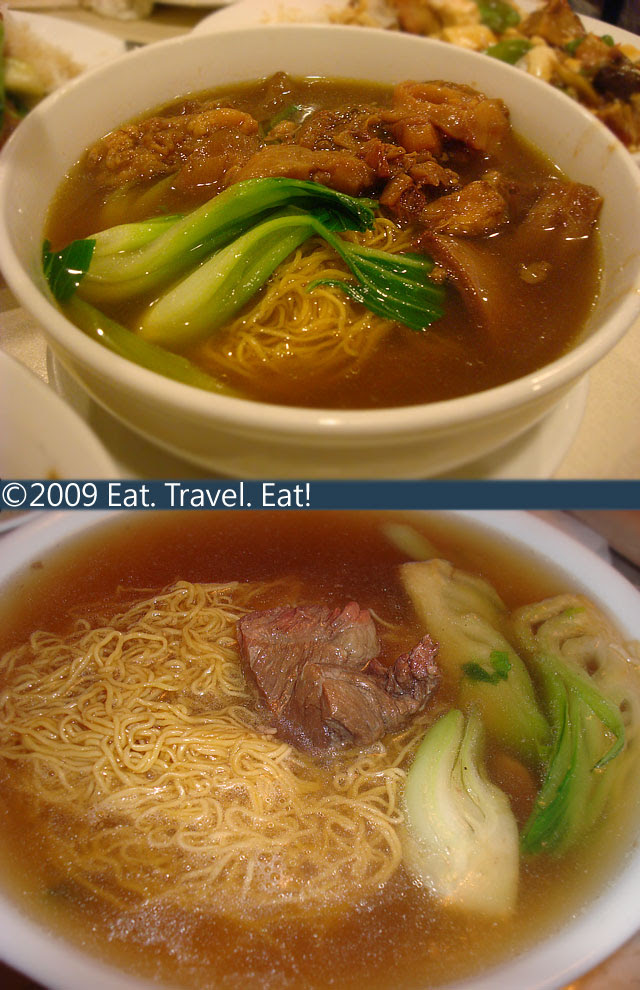 Or I just will order the beef brisket noodle soup instead, as Sam Woo's noodle soups (e.g. wonton noodle soup) are quite excellent. Again, you can request for tendons if you would like. Sam Woo's version of the dish is pretty good. A nice rich in depth beef broth with bouncy and chewy thin egg noodles is a good mix to start out with...and the beef brisket is the same as the rice without the gravy but with the flavor. Unfortunately, the bok choy on the dine in visit had a off putting taste to it so we put it aside. That flavor went into the soup eventually too. Boo.

Now you may be wondering, why does the take out noodle soup have so much soup in it? Well, I did not know that... 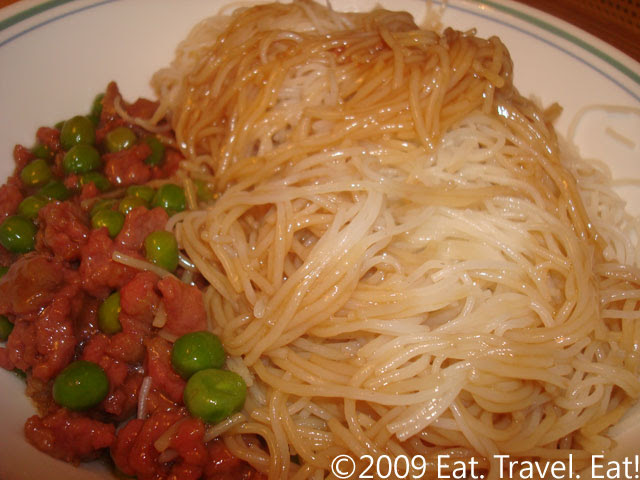 ...the minced beef with rice noodle soup required the soup also, which was placed all in one container. Oh well. We mixed the soup in after taking the photos. As you can see, there is a minced beef mixture and rice noodles. The minced beef was very similar in terms of taste to May Mei, but not as meaty or salty. Rice noodles, like the other restaurants I have reviewed on the blog, were chewy and cooked to a bouncy stage. Good as usual. 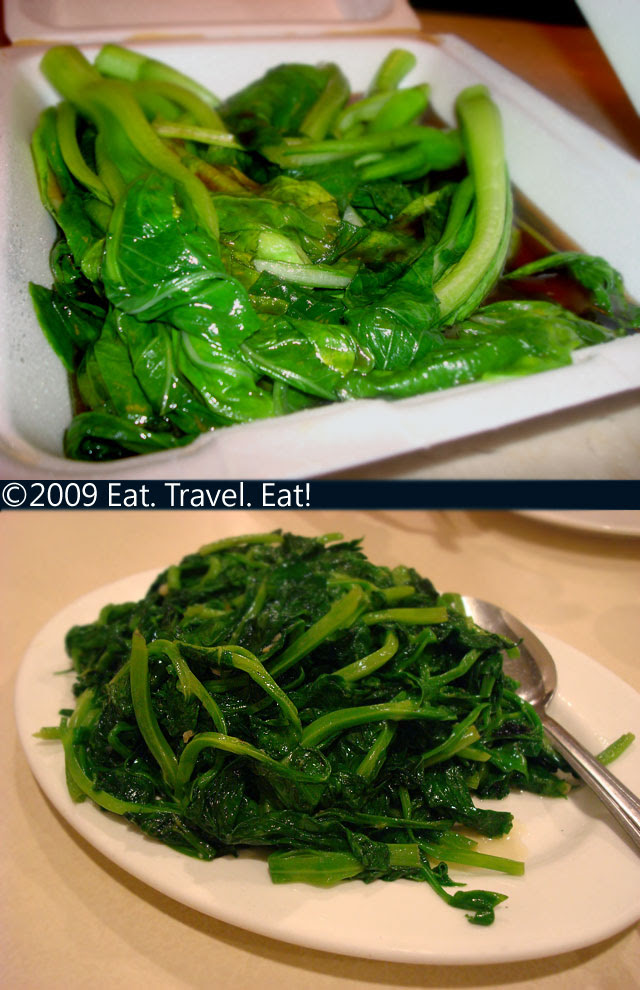 As I always seem to ask in these long posts, what about the veggies? Well, we tried both the choy sum and the sauteed snow pea leaves with garlic, and both were very nice. The choy sum had a twist to it, being that oyster sauce was added, giving the dish an interesting sweet flavor. The snow pea leaves were great to munch on during our dinner visit as they were the first to arrive. Pretty similar to May Mei too but not as oily and more crunchy. 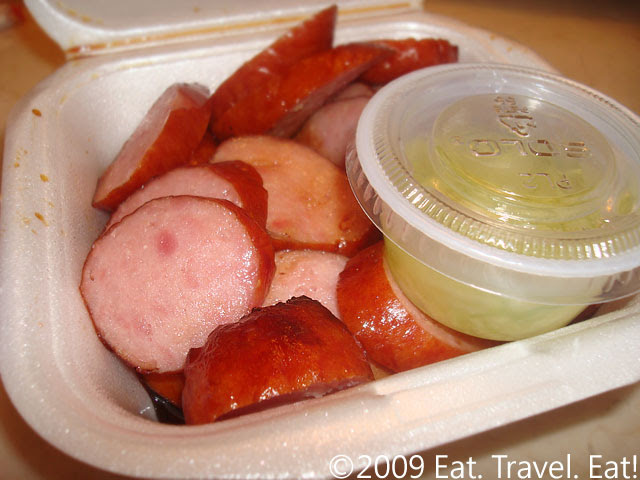 And I of course should show you at least one BBQ item since I even forgot to take a picture of the display case of the meats. The sausage that you see in the styrofoam box was and still is one of my favorite BBQ foods. Lately I haven't been ordering it much since I do not go to Full House BBQ (next door to Full House where you can order take out dishes, left over dim sum, and BBQ items), the closest Chinese BBQ joint. So when we went to Sam Woo BBQ for a takeout we decided to order the sausage, and it was as good as I remembered. A savory and salty fatty sausage is marinated in a sweet soy sauce which when combined together is AWESOME with plenty of rice. A bit heavy on the flavor, but that is why the rice is there for. The ginger and scallion oil help cut down on the fattiness and saltiness of the sausage.

In short? An affordable place to go for delicious, authentic Chinese cuisine. Be prepared to wait though during the busy hours for eating though, and remember to bring cash and an empty stomach to finish most of your order.

KirkK said…
Hey ETE - I'd like to read about anything you feel the urge to write about! We've eaten at this Sam Woo many times, the food is not bad, though I still think Sam Woo in Alhambra, though kinda on the grundgy side is the best of the bunch.
November 12, 2009

Bill said…
I like the MSG caution... I guess their food might be worst without it.
Then again MSG make everything taste better.
November 13, 2009

EatTravelEat said…
Kirk,
Ok then! I'll do what I want :). I think the worst Sam Woo is the one on Las Tunas. Never had a really good experience there other than the fact we knew one of the employees there. Back then they had a grade lower than a C. How could they do that?

Bill,
Actually not really. The food tastes almost the same without MSG. After all there are substitutes, like chicken bouillon and oyster sauce...
November 13, 2009

KirkK said…
Hi ETE - I don't mean to beat a dead horse - but in many cases "hydrolyzed protein" means MSG, which includes Boullion and most Oyster Sauces contain MSG. My main point, MSG is not evil.....
November 13, 2009

EatTravelEat said…
Kirk,
Aha! So I thought...and restaurants probably get away with that too :). So there's still MSG in one way or another and people can put MSG in still with nothing in its own form, like udon soup base. Definitely not evil as still so many people use it in small amounts.
November 13, 2009