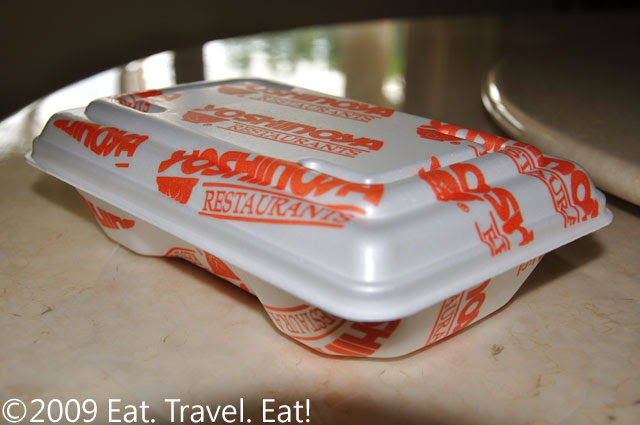 (Notice anything different about this photo?)
Since I mentioned Yoshinoya in my last post on Garden Cafe last Friday, it is kind of fitting for this to be a transition blog post as I aim my direction towards products and recipes for a while (you have not gotten tired of full out restaurant postings yet? Really?). Yoshinoya used to be one of the fast food places we would frequent for a quick meal back in the day. After all, it was cheap, the portions were large, and their clam chowder was quite yummy for fast food (and low-middle end buffet standards; definitely not seafood restaurant quality though). But, it was the end of summer this year when that would all change.

See the box above? It used to be large, perfect for splitting to two for kids or for a filling meal for an adult. The box used to be rectangular- not the "vial" like shape it is now with the bottom being smaller and then larger. It was not as tall in height as before. Lastly, the lid was separate from the bottom of the styrofoam bowl, which made it easier to eat. However, it made the Yoshinoya food hard to transport back to home. Spills were easily made. Now, this meal gets you full, but not very full like it used to be. Hmm....good for the belly? I guess.

Now, with all these changes, did the price go down? Nope. No change. Almost like I am getting oh maybe 20 percent or more less food compared to before.

At least the food did not change. Or else that would be not very nice. 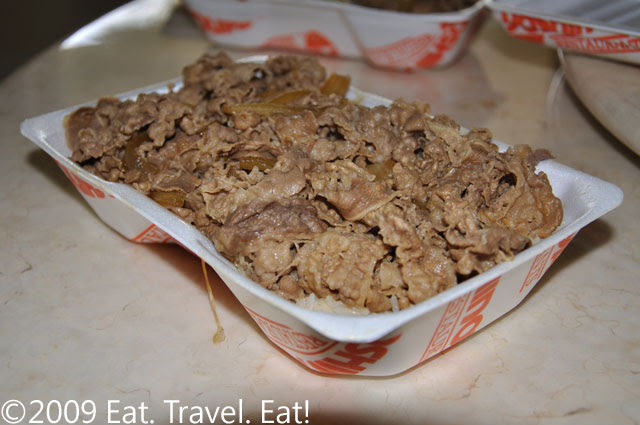 Yoshinoya's most famous item is their beef bowl, as evidently seen by their logo which has the word "beef bowl" in it. In Japanese this dish would translate to gyu-don.

As their website states, the beef bowl has:
"Thin juicy slices of USDA choice beef simmered with fresh onions in a special sauce of herbs and spices over a bed of plump steamed white rice."

That is pretty much the description of the dish! The rice is plump, fat, and chewy (not clumpy though). The special sauce is probably just soy sauce and wine with herbs and spices. Now the beef is probably not very "juicy" all the time as it is very thin, but it is tender and not dry. I would not call it juicy though. Onions that come along with the beef have the flavor of the simmering liquid but they are still quite crisp. Of all the items at Yoshinoya this is the one I order the most. Not saying that I do not like the other items, but the beef bowl tastes best in my opinion of all their items. 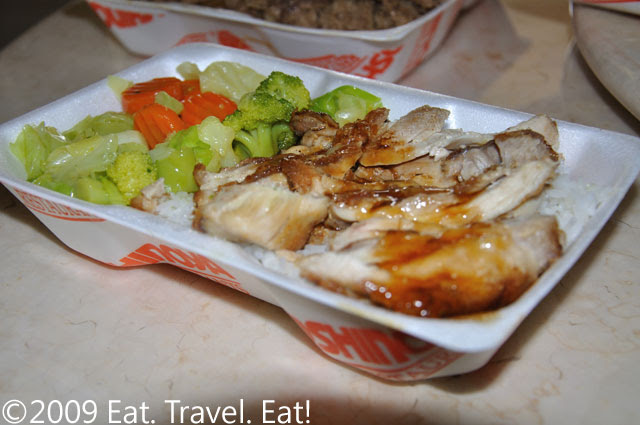 "Tender, golden-brown slices of chicken topped with our exclusive teriyaki sauce and mixed vegetables with our signature sauce over a bed of plump steamed white rice."

Also with the fact that the "signature sauce includes chicken broth".
I just learned something new, and that is the signature sauce for the vegetables. Who stated that before in their restaurant? I never heard of it at all at my years of visiting Yoshinoya.

Suffice to say, this chicken bowl's description is really not as true as it states. The chicken is golden brown (sometimes a bit charred too), but it is quite dry in comparison to places like Red Ant Cafe with their chicken chops (but why am I comparing a cafe to a fast food chain now?). You can also ask them to remove the skin if you would like. Now, the teriyaki sauce is quite deep in flavor, but still not as good as what I have had in authentic Japanese restaurants. It is salty with only a hint of sweet, and lots of condensed soy sauce flavors. No sweet teriyaki sauce here. I've never liked it due to the fact it was quite salty in my opinion.

The vegetables are a mix of brocoli, cabbage, carrot, and cauliflower, none of which are crisp at all but rather easily mashed with a touch of the fork (exception being the cabbage). The sauce is really nothing special and is rather bland with a hint of savory salt flavor. That is all. If that was my signature sauce, I would be embarrassed to share it to everyone! 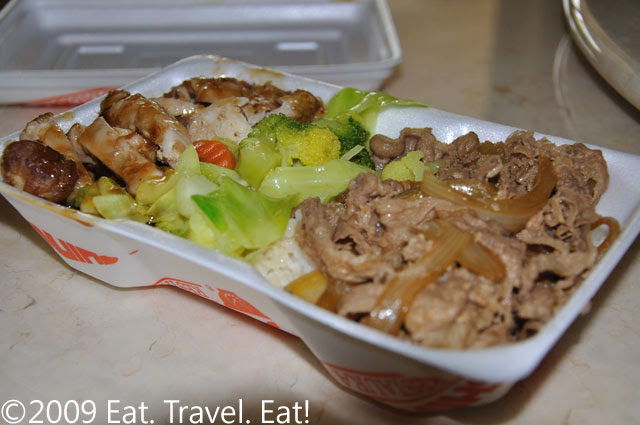 Combine the beef bowl and the chicken bowl together and you have the combo bowl, which has toppings of chicken, vegetables, and beef with onions split into thirds. You can see the above descriptions on the two bowls for my thoughts on the taste. It is a good dish to order if you are the person who likes a variety of things to eat but you pay extra of course for that experience!

In short, Yoshinoya's rice bowls are a dependable and quick choice for those in the mood for rice. Although the prices are similar to a restaurant (Sam Woo. Same cost (actually less than Y.) for a plate rice dish), the food is not really restaurant quality. But it is a good reliable choice for fast food. Certainly beats eating McDonalds or some other quick hamburger chain for food.

Yoshinoya
Multiple Locations, the one I went to was at:
707 E Huntington Dr
Monrovia, CA 91016
‎
yoshinoyaamerica.com

*Note that with all the rice bowls Lee Kum Kee light soy sauce, red colored shreds of ginger, and red pepper are also available as condiments.

So what was different about the photos in the post? It is the first post where all the photos were taken with my new camera. The results seen online though are quite different then when seen in Nikon's ViewNX software as NEF (RAW) photos though (like with the beef it has slight metallic looks on one piece- meaning it had been oxidized...).

Unknown said…
ehm...never liked yoshinoya, i used to like the one in jakarta's mal ciputra...i think it's called beef bowl...was that yoshinoya? they make excellent chicken!
November 17, 2009

Mrs. Donato said…
I prefer the beef bowl over the others too.
The veggies I'd pass on if only I didn't feel so bad about not having my vegetables with the meal. Fine with me since I'll mask the blandness with their teriyaki sauce. Although there's a beef bowl located in san gabriel/lower alhambra that tastes vastly different that the rest. If I lived within tolerable distance I'd go there for my beef bowl.

EatTravelEat said…
Mochachocolata Rita,
Probably? If that little bowl you see on the first photo matches the one jakarta then it should be...
November 18, 2009

EatTravelEat said…
Mrs. Donato,
Thanks! Haha...left a comment right when I was replying to one :). I usually just go to the Monrovia one or the Temple City. Other than that the other location I've been to is in Beijing...so far away!
November 18, 2009

Unknown said…
I've only had Yoshinoya in Beijing! It's not bad for a quick, cheap meal, and healthier than McDonalds and KFCs!
November 19, 2009

EatTravelEat said…
Alice,
Yeah, Yoshinoya in Beijing is a good choice for fast food! I think it might even have tasted better than my area. Like the fact they serve the food in real bowls and not styrofoam too, which sometimes gets melted by the temperature of the food.

Personally I also like another place called Kungfu which serves Chinese food in under a minute or your meal is free. It was quite fresh and delicious!
November 19, 2009

Jojie said…
I ordered 4 yoshinoya yesterday, i noticed that they dont give much chicken and beef anymore. It was full of rice and very little meat on top and the vegetables are like the trunks of broccoli and cauli and the middle of the cabbage. Not happy.
August 08, 2016