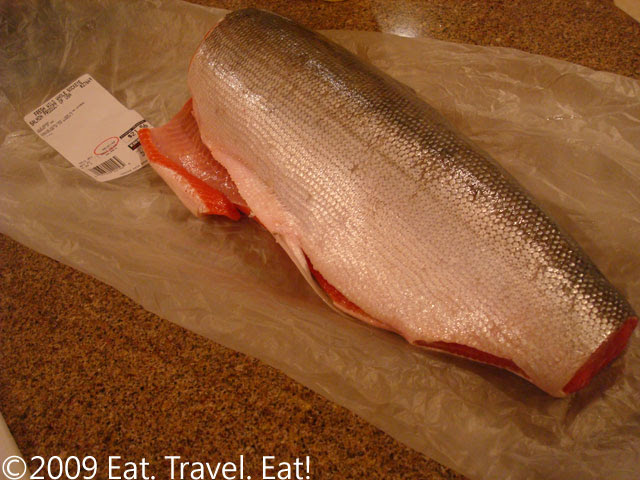 Quick Note: Just a quick shoutout today...obviously to be replaced by another post to read as today's post is just about fish and fish only. No cooking, no preparation, no recipe. I am in a rush to finish the 6 posts that I watermarked the photos on. You as you see...all these watermarks say "2009" on them, and there is less than a month to complete all these posts! Looks like the OC posts may be pushed back. Maybe.

Anyway...one item that popped up over the summer at the Costco Seafood Road Show was the Wild Sockeye Salmon. What made us buy it? Well, look at the pricetag. 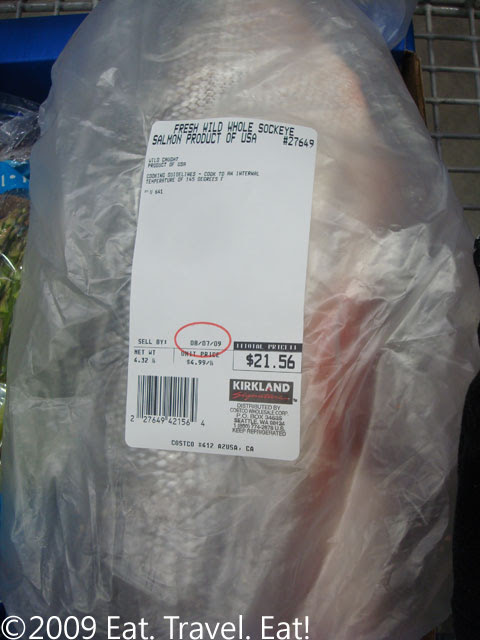 Only 4.99USD per pound! A STEAL! Farmed salmon, even at Costco, cost more than this beautiful 4+ pound piece of salmon. Costco's Atlantic Farmed Salmon costs 7.99USD a pound. 3 dollars more a pound, you see.

The cost also made us worried about buying it. Was it even fresh? Well, the Costco employee said it was very fresh and was a just received batch. Alright then.

However, although it was a steal, there were some negatives:

1. You had to take out all the scales by yourself.
2. The fish had its fins, guts, head, and tail removed. The rest of the cutting is now up to you. Filets? Do it yourself. Steaks? Again, you will need to do that yourself. We just cut them into steaks.

As for preparation we pan fried and steamed the fish with ginger and scallions, sometimes also adding some onions as well. The final touch was some Lee Kum Kee Fish Seasoned Soy Sauce or their Double Deluxe Soy Sauce. Easy and simple. (no, no one paid me from either company to write this review...as with ALL other posts that I do here on Eat. Travel. Eat!)

But how did the sockeye salmon taste? Well, if you could see on the top photo, there was pretty no marbling on the fish. Basically just a vast field of a deep orange color. It was very intense in salmon flavor and was exceedingly difficult to cook to a nice medium. There was no smooth feeling to the fish- a bit rougher than usual, but that may have been our way of cooking the fish. Pretty much every time it was cooked all the way through. With the lack of fat it probably was also harder to get a buttery feeling to the fish.

However, if the Road Show does come again offering the salmon we will buy it again. It is a great deal for wild salmon, and I'd rather eat wild salmon than the color added farmed salmon any day.