(Yay, the 105th photo taken with the Nikon :). Now 1060. Times fly!)
At another outing at our local Azusa Costco we noticed the Kirkland Signature Acai Berry with Bluberry Juice, made by Bolthouse. Due to the fact we were buying the Naked Green Machine drink already plenty of times, we wanted to switch it around a bit and so we bought this juice to try it out. FYI, this was sold as a pack of two bottles, not one, for less than 10 dollars. I can not remember the original price...

But would this end up on the cart? After all, Sambazon was coincidentally also offering samples of their drink. So, we tried that drink out. Weirdly, it felt really thick for some reason when drinking it. We also asked them between the difference between the two (not like they would know or not...). The lady said, "Our juice has Omega 3's. That one [this drink] does not." Which made the person who was paying for the bill think they added Omega 3's into the juice. Okay, no buy.

In reality, both would have Omega 3's, according to Sambazon's information on Acai. Lies! 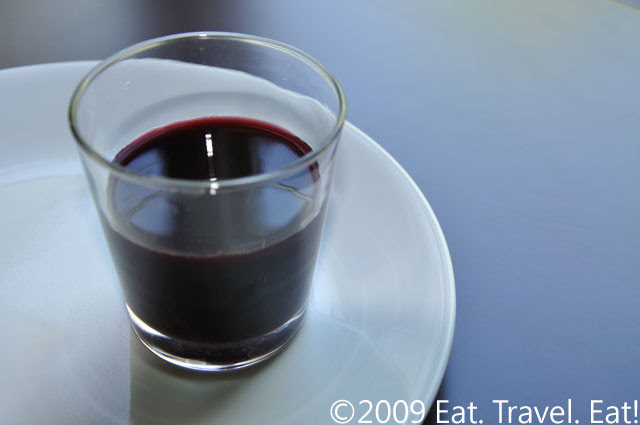 (the result after 30 shots of the same object in 2 different days. I need to practice!)
Most importantly though, how did this juice taste? Well, most of the flavor seemed to be blueberry- almost like eating a fresh blueberry that was not very tart. However, there was also a tart flavor coming from the apple juice and lemon juice. There was a slight thick feel to the juice, probably from the acai. Bits of berry flavor too throughout the drink. Overall, a very flavorful drink. However, adding water to the drink made it not tasty at all. What you can do with orange juice or cranberry juice should not be done with this juice. Just notifying you :).

Overall? An interesting product that is worth buying again. Quite tasty, but better savored in small amounts. Like the glass above- only about 1/2 a cup of juice.