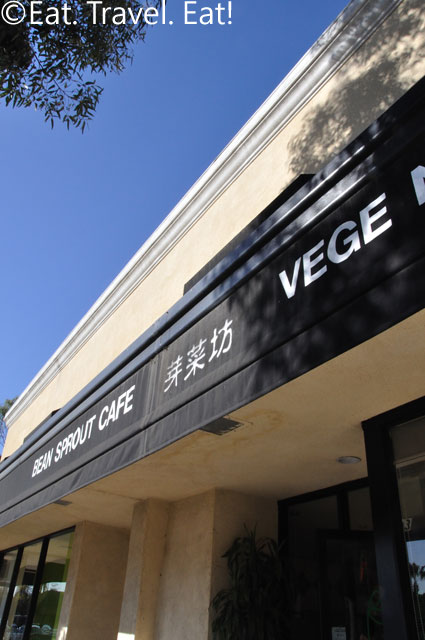 One of the lacking departments in Arcadia are Chinese Vegetarian restaurants. One of the few is Bean Sprouts, located on the busy Huntington Drive which also houses delicious restaurants like Sesame Grill, and the only car dealership in town, Mercedes Benz Rusnak-Arcadia, which is a fantastic place to go to if you are looking for a Mercedes Benz (or a pre-owned car). No dark, old showroom like Downtown LA Motors and Penske West Covina, as the dealership was built from scratch eight years ago. And pricing, if you can haggle or find a friend that has brought from there more than once, is a great deal. (plug added without pay from them)

Bean Sprouts is more of a upscale type of place, with a modern but comfortable, sunny atmosphere as well as higher prices. Gone are the cheap special deals or special sets that you find at other larger, family style Chinese Vegetarian restaurants in the SGV.

However, lunch for the matter, is a different case. For the first time visitor, might as well you come during the lunch hours. Why? Well, with every special lunch item you order, you get plenty of items to try along, like their famous rainbow rolls which usually cost the same as a lunch plate (8 of them cost $6.25). And while a number of items are left out from the menu, like my personal favorite, veggie fish, it is still a nice small menu with good deals. 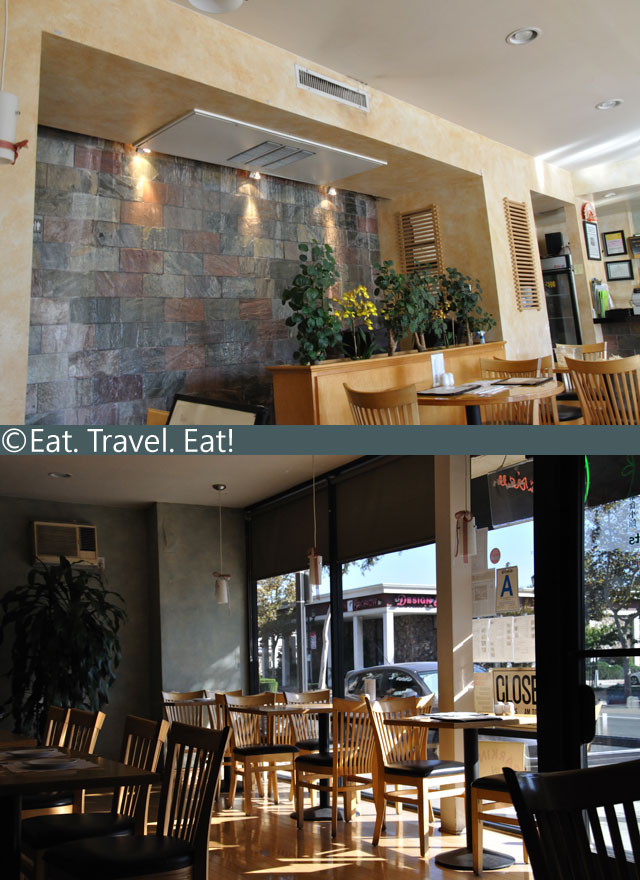 Seated inside, there is a row of bench seating and then tables with chairs. In reality, the restaurant is quite small- large parties would pretty much fill out quite a bit of space. For this visit, we were seated in the bench area. During the day time, it is one of the areas where you are covered from the sun. This brought to the photos I took later to be quite dark. For some reason, Nikon's Auto modes like to make the photos underexposed in my feelings- and since I was not using Manual mode or exposure compensation (didn't know how then...), the photos were a bit dark. You'll see the results below. Sometimes the photos are underexposed, sometimes they are how I saw them during lunch. How weird! The same thing happened last night when I had dinner at another restaurant. 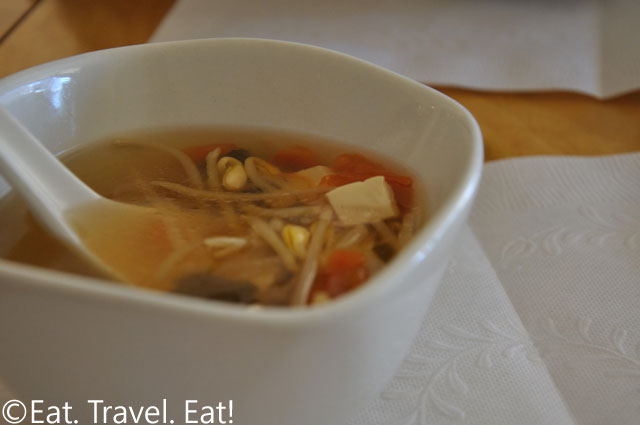 After we ordered from the lunch menu, a free soup arrived for every one of us, consisting of crunchy and robust soybean sprouts, tomato, seaweed, and firm tofu. It was quite light in flavor, but the vegetables shone out with pops of texture. 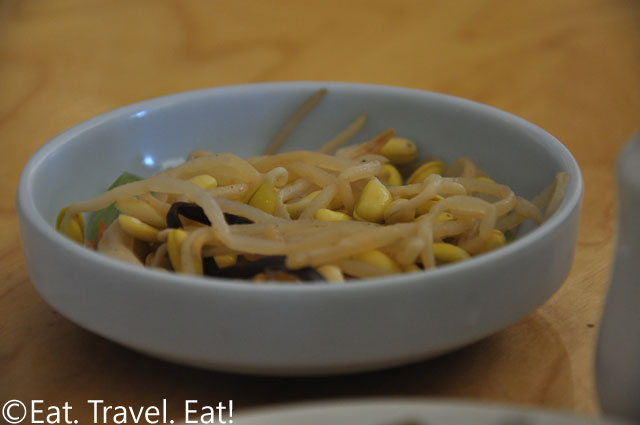 Another free item we received was a small, banchan sized plate of marinated soybean sprouts, which were basically tossed in some sesame oil, soy sauce, and the like. Like the soup, the vegetable stood out the most, and the sesame oil just provided a slight extra note to the bean sprout. 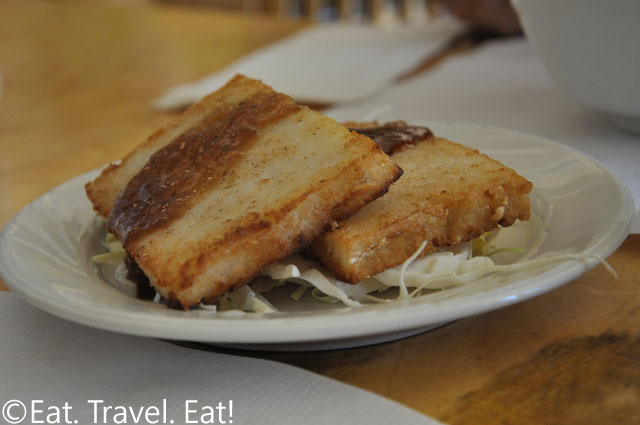 For an appetizer, we ordered a plate of Turnip Cakes, which were quite different from turnip cakes you would see at a dim sum place. These were a bit lighter in flavor, with the dried shrimp being absent in the mix. The batter was a bit more chewy, and there was less turnip in comparison to Full House's version. I do not remember how the sauce tasted like but if I remember correctly it was slightly salty and sour. In any way, it matched the crispy exterior of the turnip cakes well. Crunchy pieces of cabbage provided a nice bed for the turnip cake. 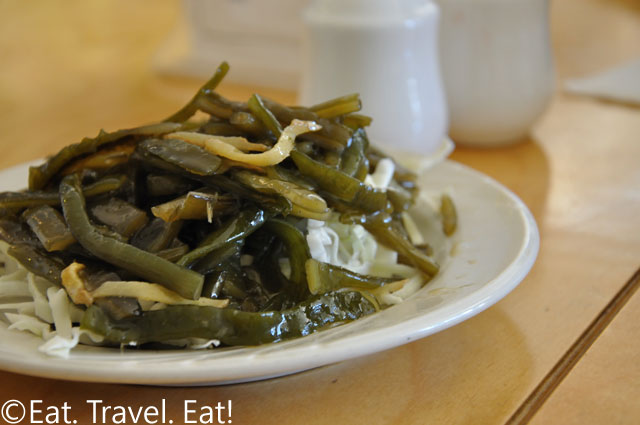 In addition, we also ordered a plate of Marinated Seaweed, which had a nice bite to it and was slightly sweet and salty. Simple rendition, but quite tasty. You can find this type of seaweed at Arcadia's 99 Ranch Supermarket or any other Asian supermarket in the area, usually salted and placed in a plastic package for sale. 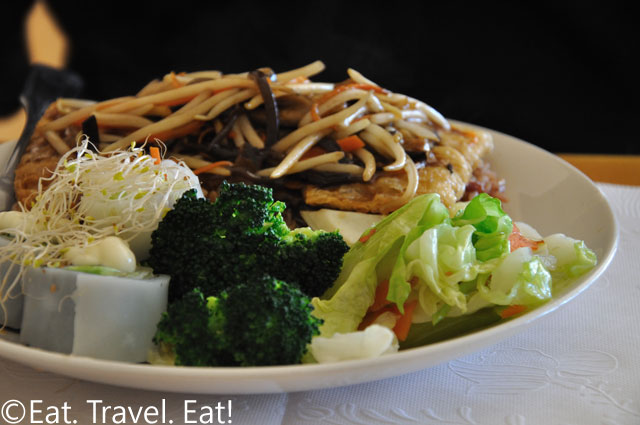 One of my dining companions ordered the Bean Curd Skin Roll from the menu, which also came with a side of broccoli, mixed vegetables, and 3 of the tasty rainbow rolls. We all chose a base of mixed brown and red rice instead of the typical white steamed rice, and it provided a nutty and fluffy texture with a bite to the dishes we ordered. The bean curd skin roll was quite simple. There were two large pieces of the bean curd skins, which were then fried. Ladled on top was a mixture of carrot, sliced wood ear, and bamboo which was mixed together with a brown sauce. The contrasting textures were quite delightful in the dish, and the lightly seasoned vegetables added crunch. 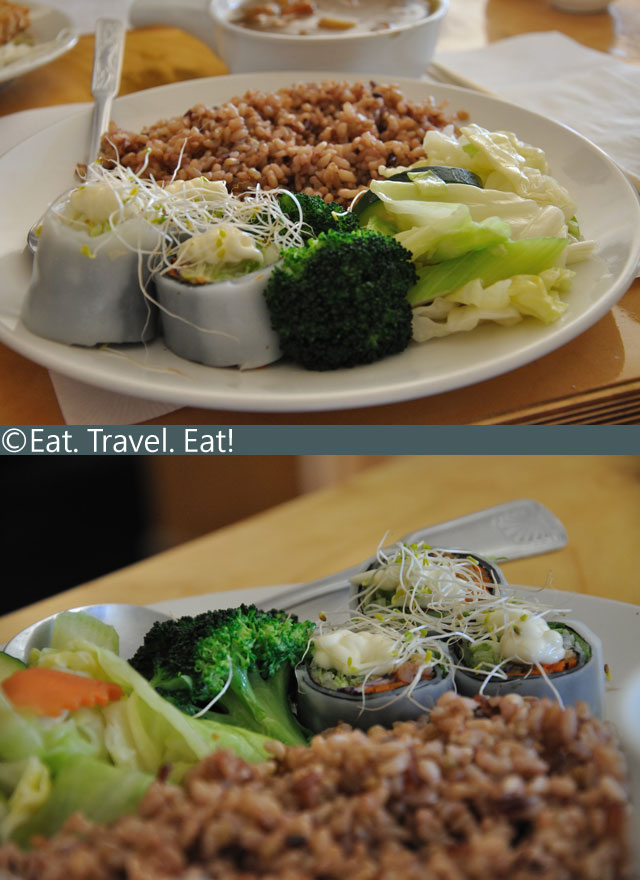 Another dining companion and I ordered the Curry rice. Again, like my other dining companion's bean curd skin roll dish, our dishes also came with a bed of brown and red rice, the mixed vegetables and the broccoli, and then the three rainbow rolls. The curry was separate, served in a bowl: 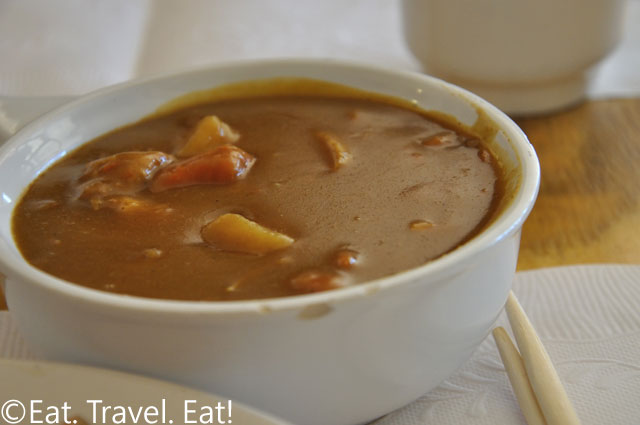 This curry was thick and was deep in flavor with plenty of cumin notes. I would call it similar to a Japanese curry, similar to my apple chicken curry which used the House Curry cubes, but made thicker with the disintegrating potatoes and an addition of cumin which made it very hearty. It was quite obvious that this curry had been on the slow cooker for a long time, as the potatoes and carrots were very tender and soft. What was the interesting part of the dish were the pieces of soy cubes, which were soft and pillow-y. There were not many pieces in my bowl of curry, but my dining companion's bowl had plenty of the soy cube pieces. 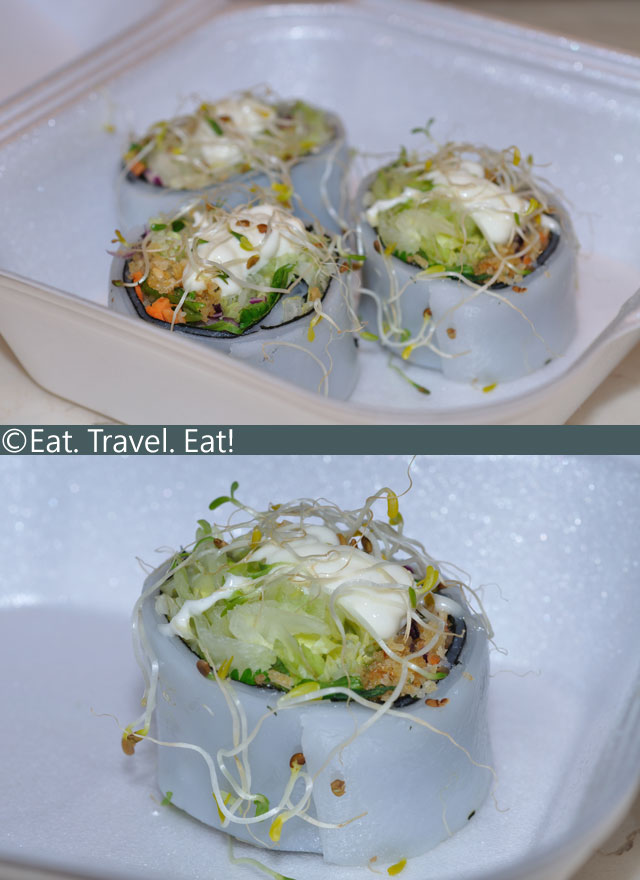 You would be correct if you noticed I did not talk about the Rainbow Rolls yet. Well, that is because I took images of them at home with the macro lens back then when I just started using the D90. And yes, these were direct flash shots with the built in flash. I was lazy to get the speedlight and so here are the results :).

The rainbow rolls were a delightful sensation when eaten. The outside wrapper was a slightly sweetened rice noodle, while another layer inside was seasoned nori, providing saltiness and flavors of the sea. Inside the tightly wrapped roll were matchstick carrots and lettuce, and a crunchy and sweet mixture consisting of crushed peanuts and crispy pieces of ??? which provided the sweet. To combine everything together, a creamy vegan mayonnaise melded the flavors together and the alfalfa sprouts provided a nice decoration and more vegetables. Always tasty, always fun to eat. These just go too quickly. One bite and you are done with one!

*UPDATE 19 January 2010: What a coincidence that I wrote about this place, and then two days later another person wrote about Bean Sprouts beef noodle soup and [seasoned beef] rice dish for the Apache Pow Wow, calling the place affordable (6-8 dollars a plate, she said) and good for the body and wallet (of course, when compared to school food! 5 dollars for so so food). Read story HERE.

pleasurepalate said…
I haven't been to Bean Sprouts in awhile, but I remembered enjoying my meals on the two times I did visit. One of favs was definitely that Rainbow Roll.
January 17, 2010

Unknown said…
omg! so...healthy! :D
i hardly go to chinese vegetarian restaurants in hk as they serve lots of mock meat, which had been deep fried, stir fried and totally drenched in oil...hope to find better veggie restos. the veggie snacks here are really good though.
January 17, 2010

tigerfish said…
Do they serve bean sprouts in every dish? Can't have customers suffering from gout problems, can they? ;p
January 18, 2010

noobcook said…
bean sprouts is one of the few vegetables that I don't dare to eat. but I'd say the food still look appealing to me, esp the rainbow rolls :D
January 18, 2010

EatTravelEat said…
Pleasurepalate,
Those rainbow rolls are great aren't they? I haven't been back in a month or so already now...

Mochachocolata Rita,
Most Chinese vegetarian restaurants are all about oily food! Tastes yummy but so UNhealthy instead of healthy.

Tigerfish,
No, don't think so. Other than the free food, you probably won't see it anywhere else other than in soups and the like.

Noobcook,
I think Bean Sprouts is one of the most appealing vegetarian places; simple plating, but it looks very beautiful :).
January 18, 2010

elmomonster said…
That roll makes me salivate. I'm still wondering what the crunchy stuff was. It looks like tempura batter?
January 20, 2010

EatTravelEat said…
Elmomonster,
I really do not know. It's crunchy, but it's not too light either. It's almost like eating crumbled pieces of a crunchy cookie or sort. I guess I will have to ask them!
January 20, 2010

EatTravelEat said…
joanh,
Yes, always going to be like this unless we spot more new restaurants or I write my Irvine trip which I am too lazy to do...
March 05, 2010