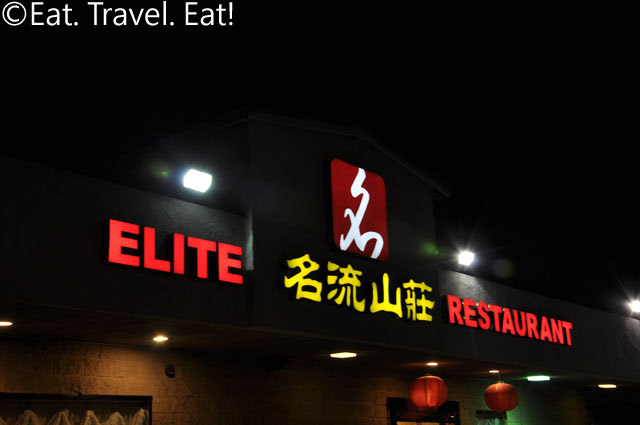 Elite. What a peculiar name. What is Elite? Elite is the name of a SAT prep school. It is also the name of a popular restaurant. Elite Restaurant is not like Full House or Hop Li. Instead, it follows the paths of places like Mission 261 and Sea Harbour- which are "high end" dim sum places. No dim sum carts are apparent, just like how most restaurants are in Hong Kong are. Instead, you order via a sheet.

Why am I even talking about dim sum when the post will not be about dim sum? Well, at these types of places, the dim sum and how they are priced pretty much speaks for the quality and the pricing for other meal times- like dinner. We visited for dinner after deciding not to eat at Embassy Kitchen again (we did the next day though), as we wanted to change it up and plus, our dining companion had a pretty good dinner there with friends. After driving for around 30 minutes, we were hoping for some good food. The parking lot was not filled, but it was filled with a pattern of similar cars: luxury cars, to be more exact. In particular: Lexus RX series (at least 3), Mercedes-Benz (at least 6), and BMW X5 (2). 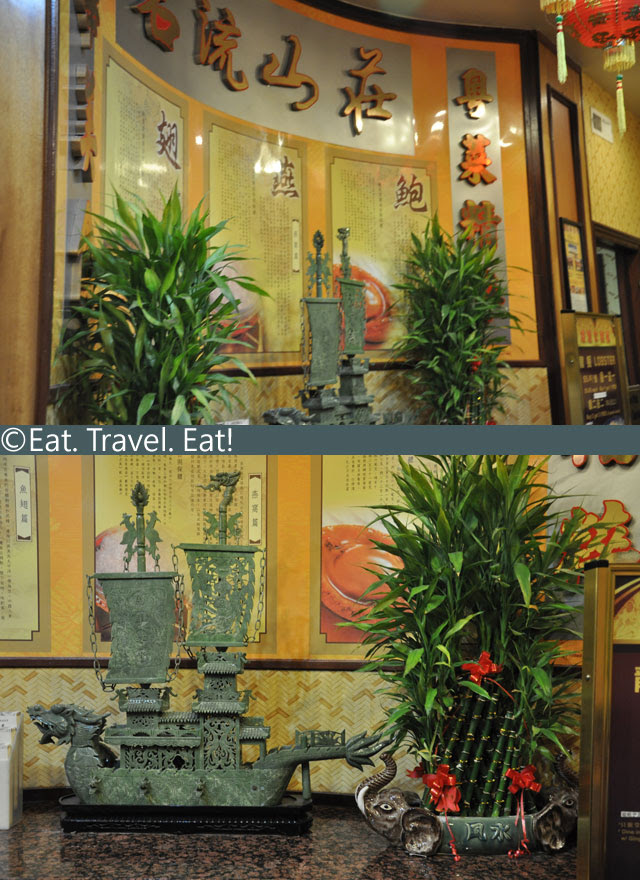 After taking some pictures of the exterior, with and without flash (end picture was without), we walked into the entry, a small green and gold area filled with their advertisements as well as some expensive bamboo plants (about 60 dollars each...) and a jade boat. With the restaurant being practically empty, we were whisked away to a tiny table quite quickly. Why a tiny table? I do not know. Other families of four got larger tables we did. 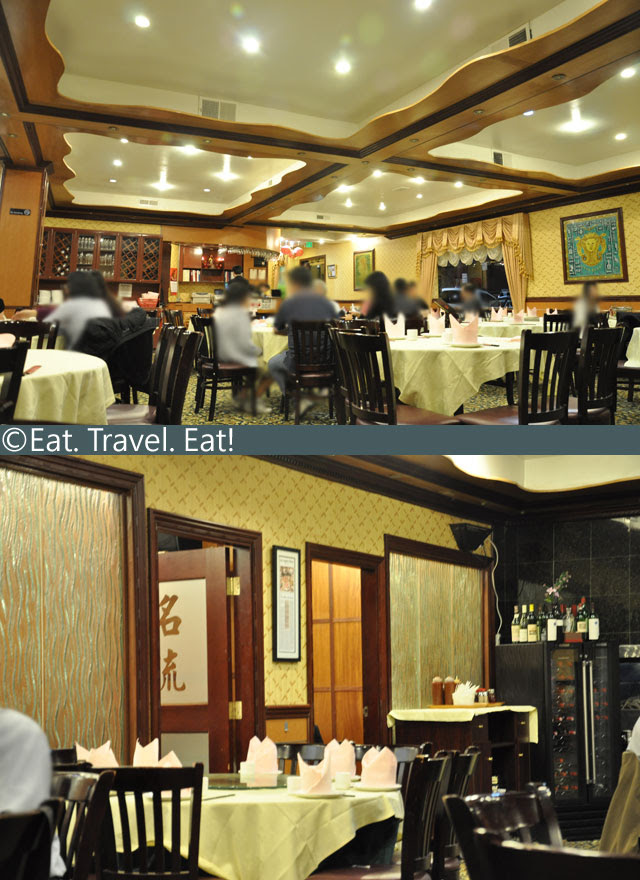 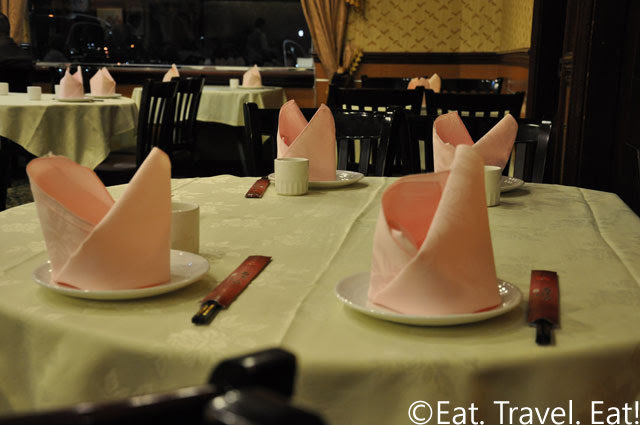 Sitting down at the restaurant, it was quite evident why long waits were usual here. The dining room was quite small. Only about 15 to 20 tables, with banquet rooms on the other side. With that said, I was expecting plenty from this place. The details were quite apparent already. A restaurant's logo in Chinese on each chopstick? Rare appearance. But, the servers did not care at all. At Singapore Airlines, if the logo on the glass does not face you, there is a problem.

Aside the fault that already happened, we enjoyed the paintings located all over the restaurant. The horses were a gift, I assume, which were given three years ago approximately. The cherry blossoms were tucked away in a side dining room. 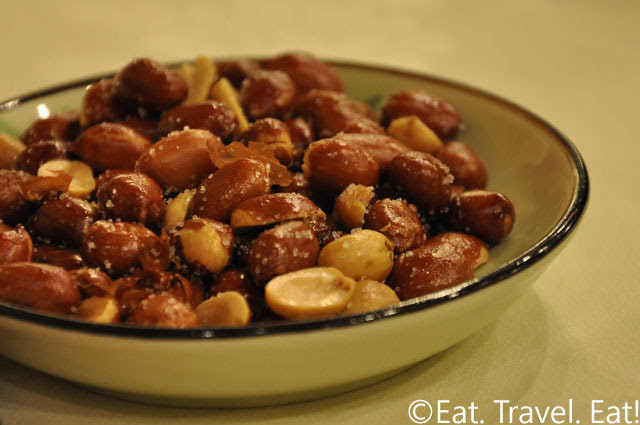 While we glanced over the menu, a plate of complimentary roasted salted peanuts arrived, which were quite dry and salty. The plate was wiped clean and taken away by our servers as we were about to finish it. Bye bye, plate.

And since the plate went away, it was time to look more into the menu. Of course, the prices were expensive compared to Full House and Hop Li. But, there were also some notices which were nice to hear about. No added MSG on purpose (assuming that excludes things like oyster sauce which could be added in). As our courses arrived, it was evident how the tastes were different compared to other restaurants that may use MSG. 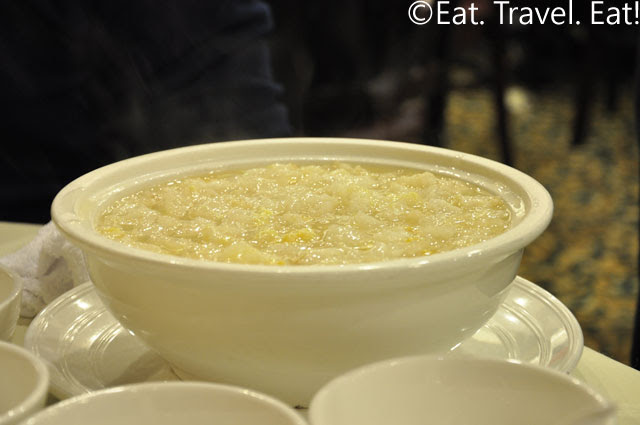 Our Sweet Corn with Fish Maw Soup (9.80) arrived a few minutes after we ordered, so it was time to turn the camera on, take some pictures quickly, and enjoy! Our server placed about a ladle and a half into each soup bowl and served our dishes. In addition,... 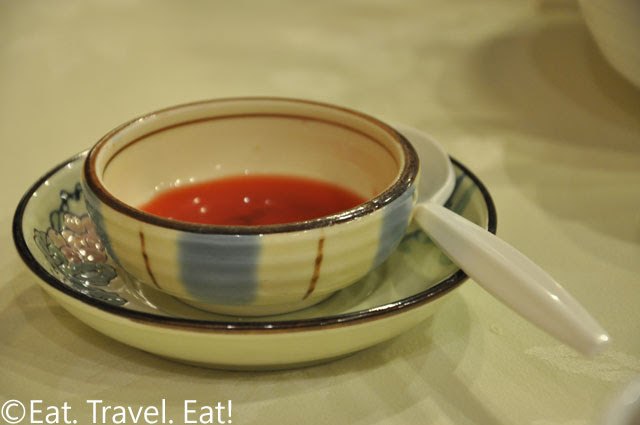 In addition, a dish of red vinegar was given as well. We requested more, and then another dish came. And we requested again, and then came a tiny glass bottle. We finished half of the bottle. Why so? The vinegar was very light, maybe even watered down. It did not have that big of a sour punch that other red vinegars did. Different supplier? Maybe... 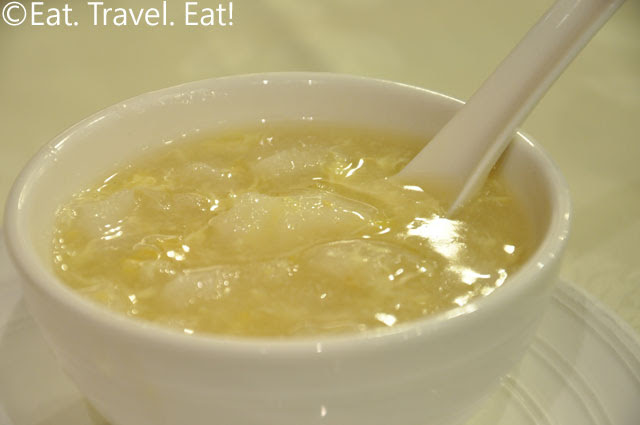 Slurping the soup, we all noticed that the soup was very light in flavor in comparison to most other places. There was very little corn flavor in the soup, and the meat stock for the base was very subtle and lightly flavored, probably due to the lack of MSG or a long simmering process. Luckily, the fish maw was excellent, with no off flavors- puffy and slightly chewy. There was very little/no cornstarch slurry added to the soup, which we appreciated. See, the benefits of paying more for your meal includes the fact that there are less unnecessary ingredients added. Just like how expensive potato chips have less ingredients than thrifty potato chips. 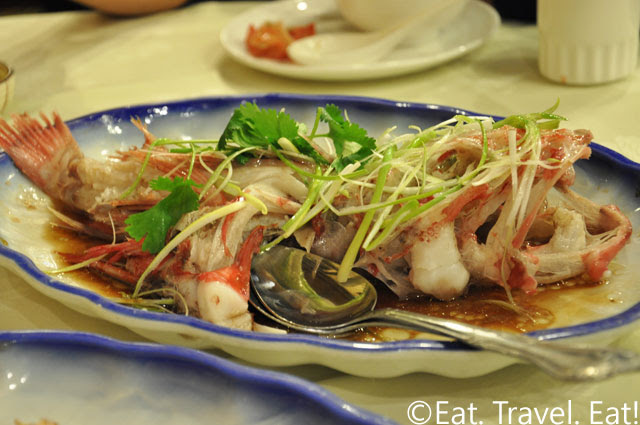 After finishing the soup, our entrees arrived, and the main star was a plate of steamed California red cod (2 pounds, 19.80USD a pound). We were hoping the fish to be excellent, but unfortunately the fish was not fresh and was also overcooked, with the outer part of the fish exposed to the steam being hard and rough compared to a smooth and silky perfectly cooked red cod. The scallions were very thinly cut, and the lightly salty soy sauce was delicious with sweet notes. However, the red cod was not well prepared and steamed. Very disappointing, as the restaurant was not even full with customers, which should have allowed the chefs to be more vigilant on how long the red cod should have been cooking. Steamed fish is one of the things that tells you how good a Chinese seafood restaurant is, just like how Beef noodle soup is the dish that tells you how good a beef noodle soup restaurant is. Elite did not do too well in this category. Embassy Kitchen is still the winner for a perfectly cooked and well prepared red cod. Unfortunately, they seem to rarely have red cod these days. :( 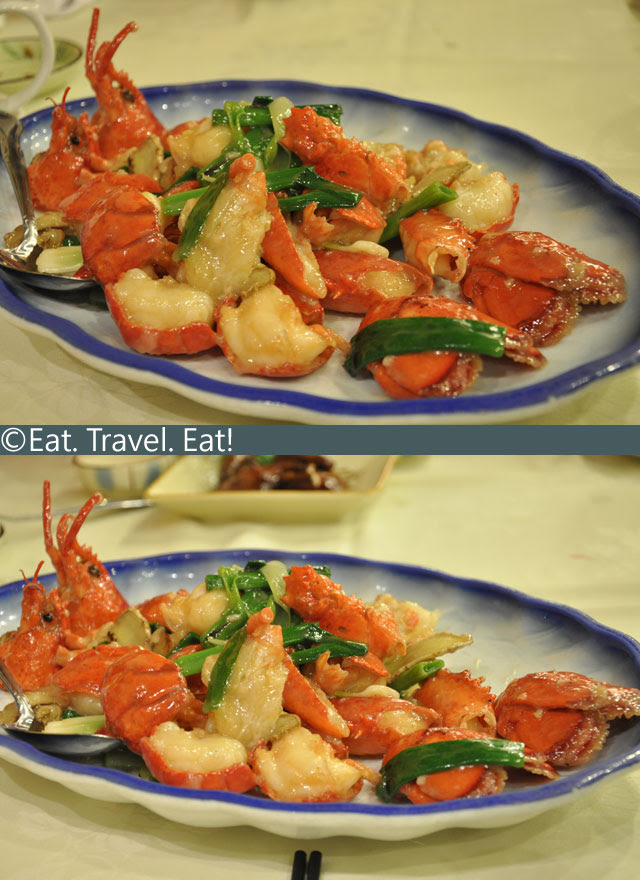 We were hoping the Marine Lobster (Ginger and Scallion Preparation, buy one get one free for 5 dollars) to be better, and it was an excellent deal also! But the lobster was overcooked a tad, just like the fish. Again, this should not have happened as there were only about five tables being served. The lobster was however beautifully presented, and the coating for the lobster was cornstarch, giving the outer crust a smooth texture. The ginger and scallion sauce could have been a bit more flavorful in my opinion but maybe I am just accustomed to other restaurants where MSG is added, and thus the sauces are more flavorful. Elite does not add MSG (by itself), as I told you earlier. 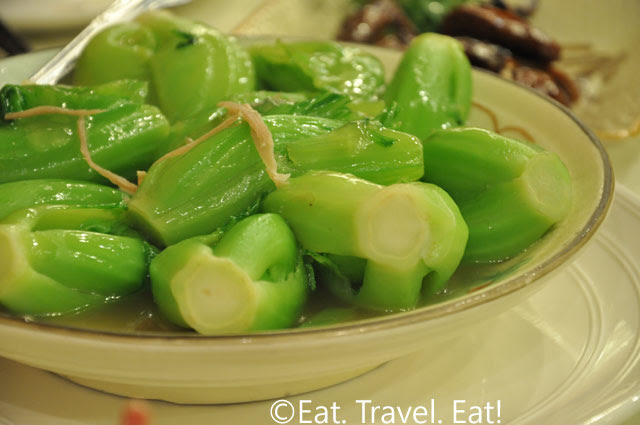 Luckily, the Poached Mustard Greens with Superior Sauce (10.80) were better. The mustard greens were cooked nicely, retaining their shape while still still having a nice bite. Better was the superior sauce, which was spectacular with hints of braised abalone sauce. It had a nice depth of flavor in comparison to other restaurant's versions of "superior sauce". Ultra delicious with rice! Unfortunately, right after one dining companion took away the last mustard green and I was holding the spoon to take more of the sauce, the pool of scrumptious superior sauce was taken away immediately by a server. NO! NO! NO! Why are you going to waste that sauce and dump it to the trash? (obviously, this was in my mind...) For those who like sauce, take it before you finish the dish. Elite's waiters are ultra vigilant and take away each plate right when you are finished. Good for some people, bad for others. 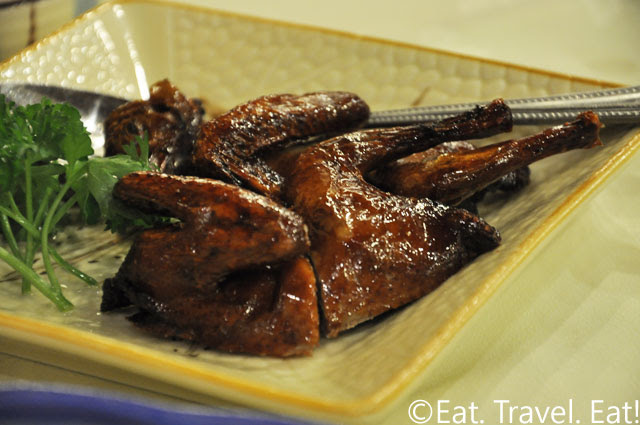 We also ordered a baby pigeon (14.80) to share , but we were not expecting it to be this small! I tried some other ways to take the picture of the pigeon. None were very good. 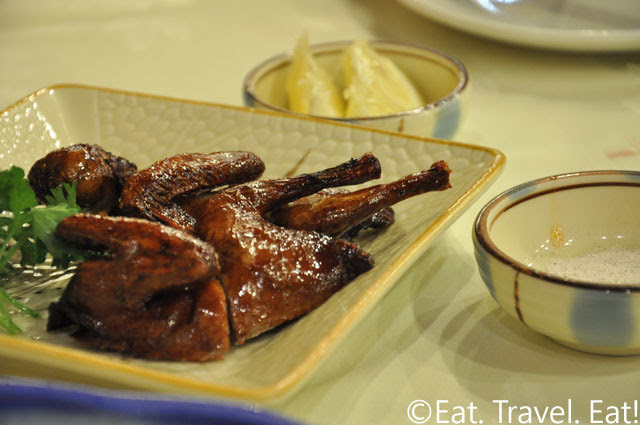 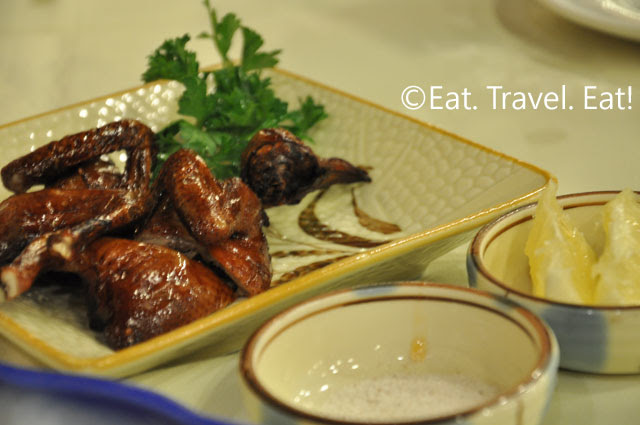 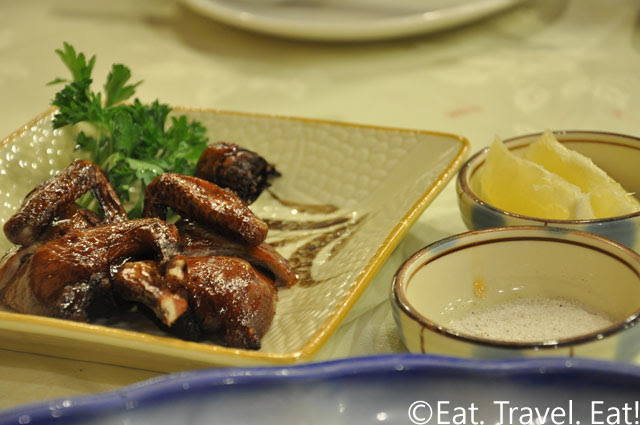 We were not expecting it to be this small, but I guess we should have noticed how small it would be when the waiter was saying they would split it into four pieces instead of the usual two for them. The pigeon was flavored with some five spice powder. In size comparison, this was much smaller compared to Full House's version- even smaller than the Pelican Hill quail pieces, with less meat too.

As for taste, I'm finding pretty much all the Chinese restaurants make pigeon/quail in the same preparation: fried/roasted to a golden crisp. Elite's version was just not as oily, but it wasn't particularly juicy either. So, kind of disappointing as it was smaller and pretty much the same or worse as other places that cost less. Plus, the pigeon was roasted to a very dark color on the outside, almost close to black, which doesn't really please us. It may please you though. :)

And for your information, steamed rice was 1.20 for a regular rice bowl. No big tub, no refills. 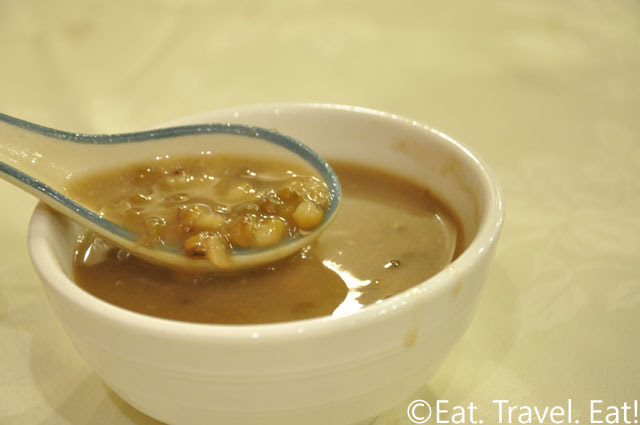 To end the meal, everyone got a complimentary bowl of mung bean dessert soup, which was accented with dried orange peels. Sweet and tasty, it was a happy ending to what was an expensive but only average meal. But, some other people got this instead: 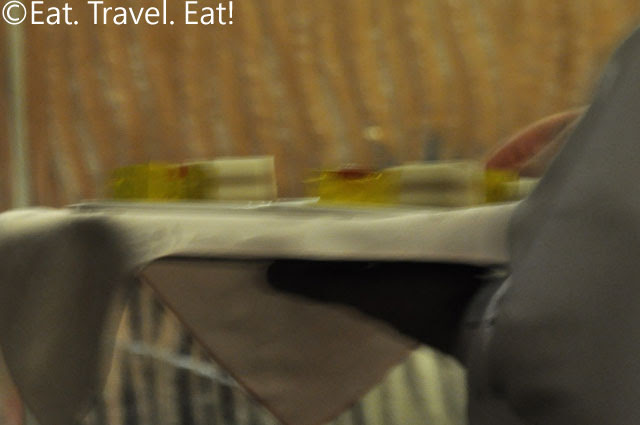 What is this? A variety of delicious gelatins? I wanted this instead of the dessert soup. But, they never asked us what we wanted. And maybe, the table paid for those squares of gelatin. That will be a mystery.

I apologize for the not very upbeat tone in this post, but it is really disappointing to see such a restaurant overcook their food when customers pay at least 10 percent more than they do at other restaurants of the same level. The taste was good, but overcooking food weighs more in my book. Again, comes the point in my review policy: why pay more when something that is less expensive is better? But this post gives you a warning: go for dim sum (as Wandering Chopsticks and many others have enjoyed it. We thought it was okay but too far from where we are.), not dinner.

I guess Elite is the same as how I wrote off Full House about a year ago. (That will change after I edit my photos for a large Full House post) It kind of explains why the crowds will wait for an hour for a seat during dim sum time, but do not need to wait during dinner. Maybe next year they will be better. Full House has gotten much better in the course of a year from the NYE post!

A better suggestion? Embassy Kitchen. Also am planning to write a big post on this place with a giant photo queue. Same echelon as Elite (no dim sum though), but much better service and food. Or, Capital Seafood and Empress Harbor in Monterey Park- both are at a slightly lower price range than Elite, but the food preparation is just as meticulous and better.

Dave -nibbleanibble said…
Was never a fan of Elite. It's alright I guess...but I do expect more from a restaurant that charges in that range.

Too bad Mission 261 is now closed, so my current fav is probably Sea Harbour.(Which I will write about in a few days.)
January 30, 2010

Wandering Chopsticks said…
That explains the empty parking lot when I drive by at night.

I like Capital Seafood slightly better than Empress Harbor.
January 31, 2010

EatTravelEat said…
Dave,
I like Mission 261 too. Too bad they closed down- I used to go there quite often.

Wandering Chopsticks,
I like both but go to Empress Harbor more as I've been eating there for 10 years, while with Capital, about once in two years. Ocean Star used to be just as good but not any more, unfortunately :(.
January 31, 2010

tigerfish said…
Only for the Elite? From the photos you have, business seems slack huh? Where are all the Elites???
February 03, 2010

foodbin said…
i like those poached mustard green and pic 3 of the pigeon was OK.
February 10, 2010

joanh said…
they seem to have jinxed themselves with the name.. kind of like those parents that name their kids after ivy league colleges.. haha

EatTravelEat said…
joanh,
Ha, that could be! I used to not like to eat pigeon, now I am pretty much okay with it but everyone seems to only fry them.
March 05, 2010