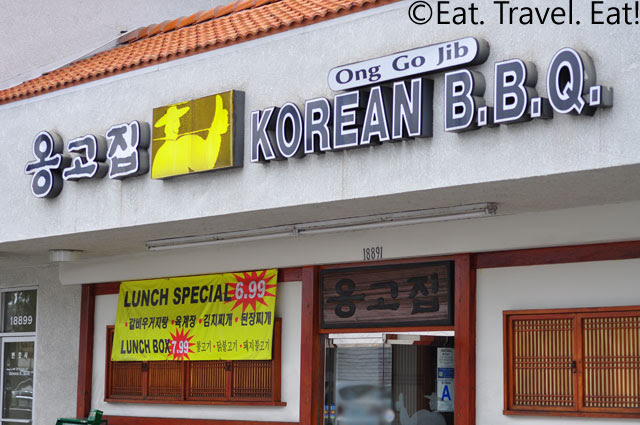 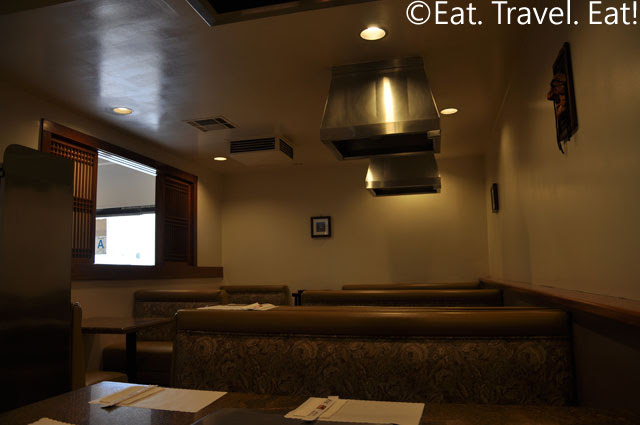 In fact, it was quite empty being at around 11AM. There was one table with a chatty teen which I will talk to you about later, and another table with some seniors eating some food. That was it! No one else was there. None of the grills they said they would use for BBQ were on either at the tables. It was all quiet, with the teen (or college student, I don't know) making all the noise on college, food, and travel to his grandma. :) 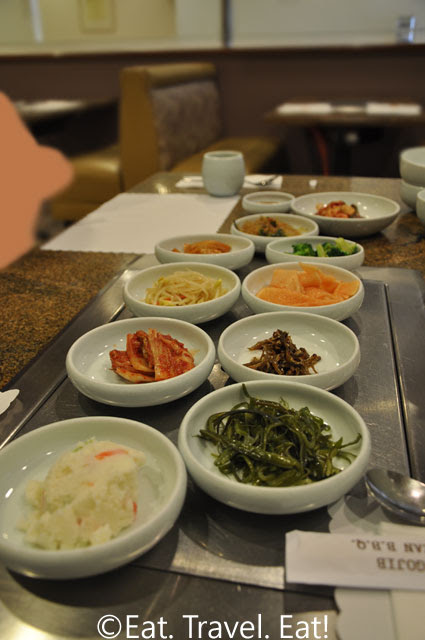 After ordering from their lunch menu, multiple dishes of panchan were placed onto our table. This was different than our usual whereabouts but it was good! Very good. Here's a overview:
Potato Salad- Slightly sweet and not rich and heavy. Inside the scoop were minuscule pieces of carrot and cucumber.
Seaweed- tasted like seaweed with little flavoring added. Crunchy and tasty.
Fried silverfish- these were delectable, with a thick, sweet soy sauce mixed. Good by themselves!
Napa Cabbage Kimchi- It wasn't to our liking as we are not accustomed to eating slightly bitter kimchi.
Soybean Sprouts- tasted like themselves with a hint of sesame oil. Similar to Bean Sprouts' version, but without the pepper and other vegetables added.
Daikon Kimchi- This was lightly spicy and even a bit sweet. Vinegar was added for a bit of sour flavor. The daikon was crunchy too and was a favorite among us. 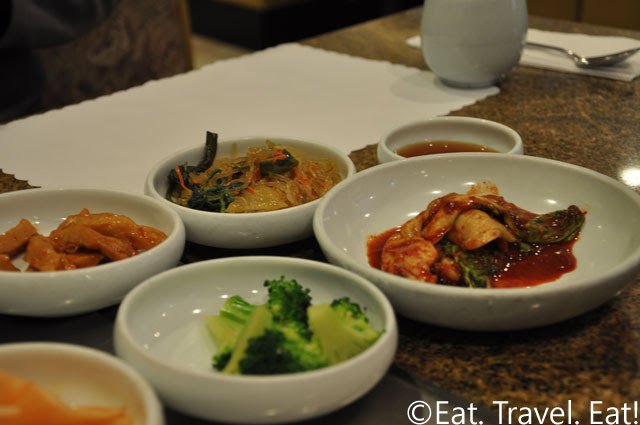 Broccoli- The broccoli kept its crunch and was lightly flavored with sesame oil.
Fishcake- This was slightly spicy (unusual to us) and sweet, but unlike other restaurants we have been to, the fishcake here was thick, not flat.
Japchae- Bouncy potato noodles and veggies were mixed together with some soy sauce and sesame oil. A tad underflavored to me, but this might be something I am not used to after not eating it for several years as restaurants I went to did not offer it.
Special kimchi- Don't know what veggie this was. Bok Choy? Not too sure, but the flavors were definitely to our liking. It had a nice depth of flavor and had a mild heat and a interesting sweet note to the kimchi. So GOOD. 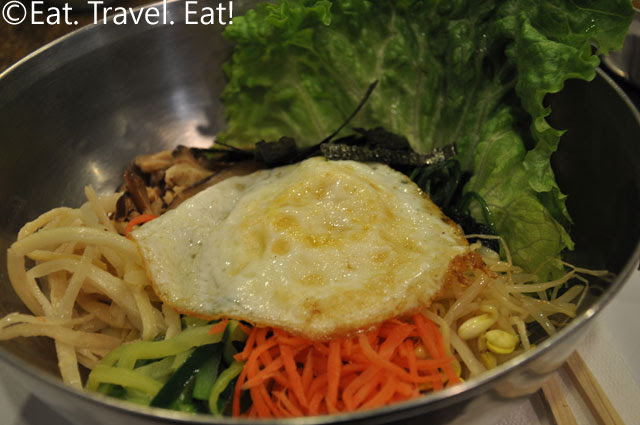 After enjoying the panchan for several minutes, my bibimbap (7 USD) arrived at the table, without any meat. Why? I guess there was no meat to be found, as 1. They were not serving BBQ for lunch specials and 2. Our server may have messed up because my dining companion wanted a veggie option and then, the server pointed to this dish as a suggestion. When I chose to switch from dolsot bibimbap to regular bibimbap (the server thought I was pointing at this when I was pointing at the regular bibimbap), I guess she also thought I wanted no meat so there was none. Anyway, meat aside, Korean hot bean paste was also served in a jar and I was free to add as much as I wanted to. When the server served the dish, she even told me instructions for bibimbap. Good job! 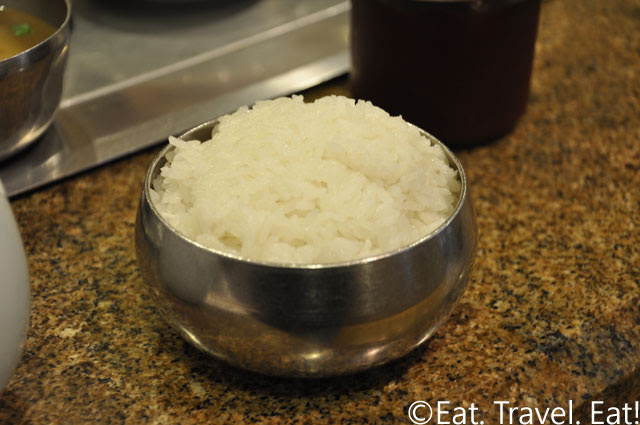 Rice was served alongside and I plopped the rice in and mixed everything together, which made the large bowl look like this after minutes of stirring along with some of the hot bean paste: 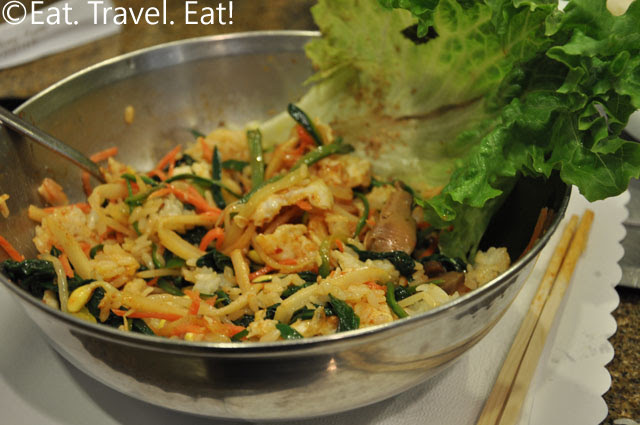 Overall, a nice healthy dish. The vegetables crunched with each bite and were obviously the star of the show. Unfortunately, the bibimbap wasn't really warm, even with the rice added in. I'd be fine with this on a summer day, but this was winter on a rainy day. But the taste was was pleasant- a simple mix of different flavors that melded well. A spoonful of the hot bean paste added depth and a slight hint of spicy and sweet. 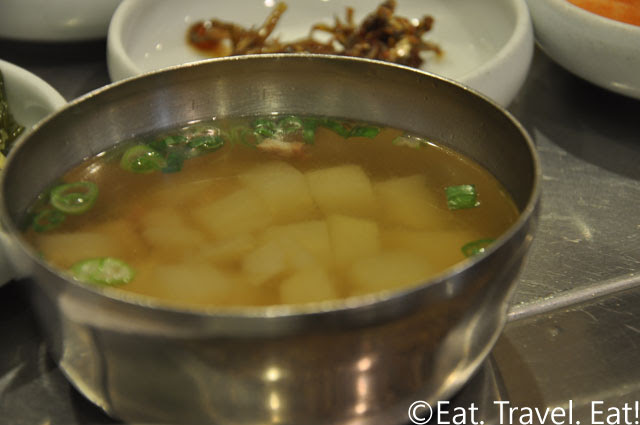 A light daikon and pork broth was served along side, with green onions added for some brightness. This washed down everything nicely after eating the bibimbap, and it was also excellent with the fact that it was served hot, not cold. Next came a pot of beef tofu soup without the beef, which we left along for quite a long time until the waiter came to say it was actually my dining companion's choice. We thought we had ordered the wrong thing, but no, it was right! We thought it was going to be like a regular soon dubu with soft pieces of tofu and little liquid, but it was not. We did ask the server to not add any beef and it was followed- a piece of clam did sneak in but it didn't matter. Inside the tofu soup were pieces of cucumber, firm tofu cubes (not soft tofu), green onions, and peppers. The soup however had a nice depth of flavors of spicy and savory, but it was too salty for our tastes when sipped by itself. For 8 dollars, this was quite pricey for such a small bowl, especially when compared to the bibimbap. 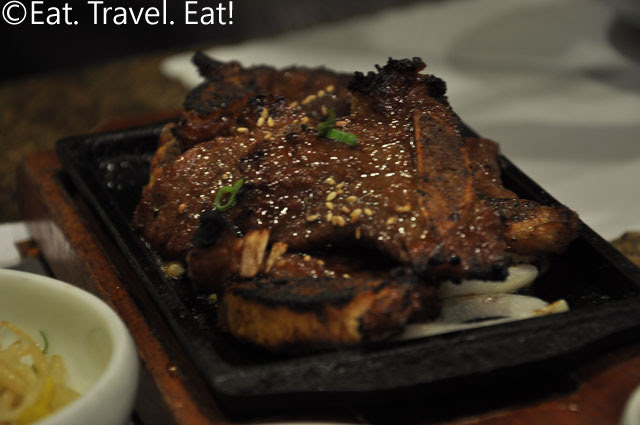 Our last item of the day was a kalbi and cold noodle soup combo (16 USD). The kalbi was lightly sweet and (more) savory with the usual marinade flavors that I have seen in a Korean BBQ place. It was however a bit charred, which we didn't like. Also, the portion was tiny, as you can see in the photo- probably just 8 pieces, not 12+. 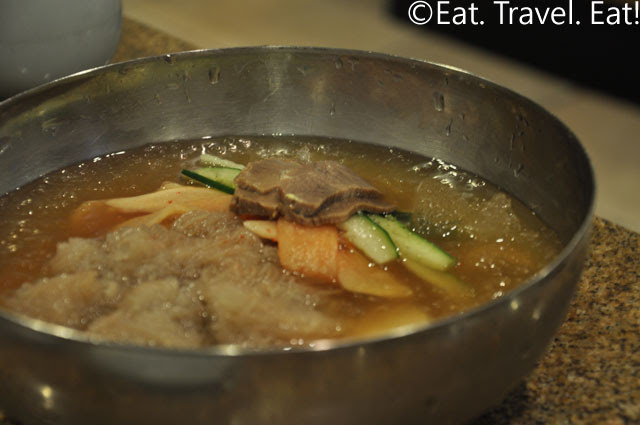 The cold noodle soup was simple and was served with a garlic flavored sauce and vinegar. Inside the bowl were pieces of ice, an assortment of fresh vegetables, and lastly chewy, bouncy noodles which were delightful to eat. The soup was lightly savory, matching the lightness of the dish. After all, were cold noodles meant to be heavy on the palate? No.

While we were eating, the table next to us was talking and was easily overheard in the restaurant by everyone as everyone else talked really quietly and were just concentrating on their food. A relative was talking to a teenage boy who definitely had a interest in food and how things were made. The lady talked about food- different spices used in Korean cuisine, as well as tastes. It was kind of obvious that she wanted to get the boy even more into food, which he seemed to be already. Good job. In my opinion we need more people interested in food that do not just stick with the fried foods available in schools...which there are aplenty. 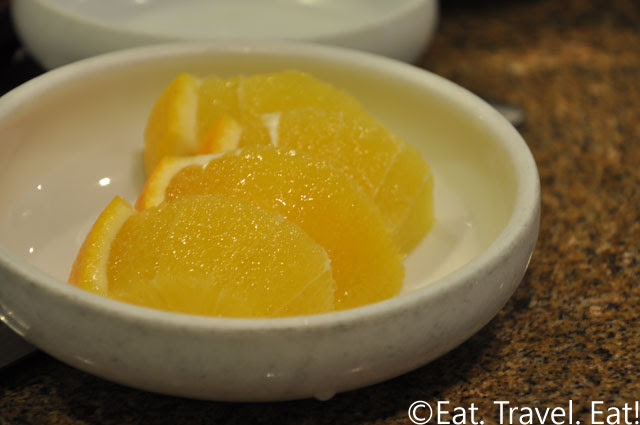 To end the meal, we received a plate of nicely sliced oranges which were sweet and lightly tangy. Simple, but very refreshing and delicious.

Overall, I would say, a good choice for people living in the area. However, there are plenty of competitors in the area which are cheaper and serve about the same quality of food or better. The service is also quite the normal, friendly service we receive around here in Rowland Heights at their Korean restaurants. The panchan here though is pretty much the specialty, but you should be coming here for the main courses, and not just the panchan right?

Watch the Vancouver 2010 Winter Olympics today! The closing ceremony is tonight too. I have for the past two weeks, you should too. :)

KirkK said…
Hey ETE - I guess the Server got really confused; first about the vegetarian thing, and second, you got a regular BBB.... a dolsot bibimbap is supposed to be served in a hot stone bowl. Dolsot = stone bowl.
March 01, 2010

EatTravelEat said…
Kirk,
Guess she did get quite confused. I actually did ask for a regular bibimbap but at first she thought it was dolsot, which cost a whole lot more!
March 01, 2010

noobcook said…
so many dishes to sample! I love buffets because I can eat a bit of everything :)
March 02, 2010

SinoSoul said…
never understood why dolsot costs SO much more. I mean, for the cleaning? I've driven by Ong Go Jib a bunch of times, even walked in, and then walked out, once (due to ZERO customers). We always end up at Cham Sut Gol.
March 02, 2010

noobcook,
Ha, the banchan made it look like we ordered so much! And we got refills. Yum.

Sinosoul,
Don't get it either! I don't want to pay 50% more for a dolsot bibimbap!

tigerfish said…
I always add daikon to my chicken soup! They are so good!

I love Korean food because of the panchan they offer - some even include fried yellow croaker fish!
March 04, 2010

EatTravelEat said…
tigerfish,
Panchan is always good in my book especially with its unlimited refills!

Wandering Chopsticks said…
I saw the yellow man symbol and thought Ong Ga Nae had changed its name, but nope, different restaurant. That's my favorite in Rowland Heights and it's also on Colima. I wonder if they're related since they have the same logo?

I like the crispy rice in the dolsot. Then add tea and scrape the bowl clean.

EatTravelEat said…
Wandering Chopsticks,
I think they are! Yelp photos of their chopsticks wrappers are basically the same, even the font of the words. And the logo too but I never noticed it when I went.

Crispy rice is always fun, just don't get your teeth numb by chewing too much of it (I just prefer to scrape and just eat immediately).

Bedwings? What a unusual verification word! I usually get letters that spell out nothing :(.
March 06, 2010