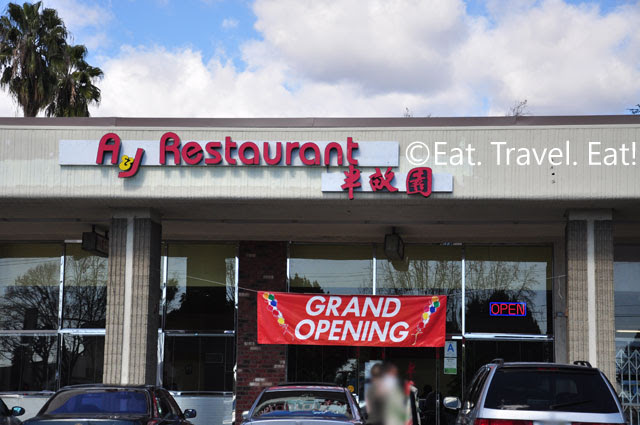 I wrote about A&J Restaurant-Irvine last summer; it was not for our tastes and ended up being another piece of "evidence" that we should just skip Chinese food when traveling to the OC. Or maybe not, with good advice from the likes of Elmomonster and Eileen on Asian food in the OC. I attributed A&J to being the Orange County- people probably were accustomed to that type of taste and thus A&J had to fit in to their wants. After I wrote about it though, comments were being left on A&J as a whole.

San Diego blogger Kirk of Mmm-Yoso said in his comment, "We were underwhelmed with A & J as well....the only thing that was ok was the Kaufu, of all things....."

Which left me pretty much thinking, I will never go back to any A&J. But somehow, we just had to visit A&J Restaurant in Arcadia after driving by it. It was a new restaurant, after all. Before, it housed many unremarkable restaurants, ranging from Japanese to who knows what? I've lost track after driving by here for about ten years now. Was it kind of obvious we were in for the same experience? Not really. We were hoping for different. And it was, on our visit on a bright, sunny long weekend where again, I got sick. ( :( ) 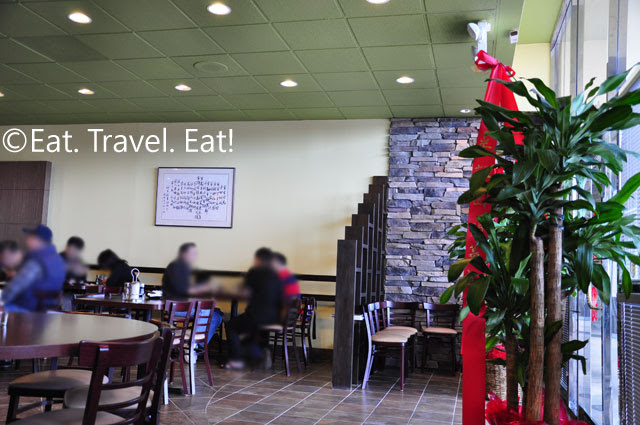 Inside it was modern and airy with plenty of natural sunlight from the windows. A server, which ended up to be a previous employee at Mandarin Noodle Deli- Temple City, took our orders and checked up on us.

What we were already displeased with as we sat down were the dishes. Whoever was cleaning them was doing a lazy job. All the plates, tea cups, et cetera had a film of oil on them which could not be easily washed off with a rinse of tea and a napkin wipe. We try, we try. This was quite disappointing though to see such problems when A&J had opened for about two months when we visited. 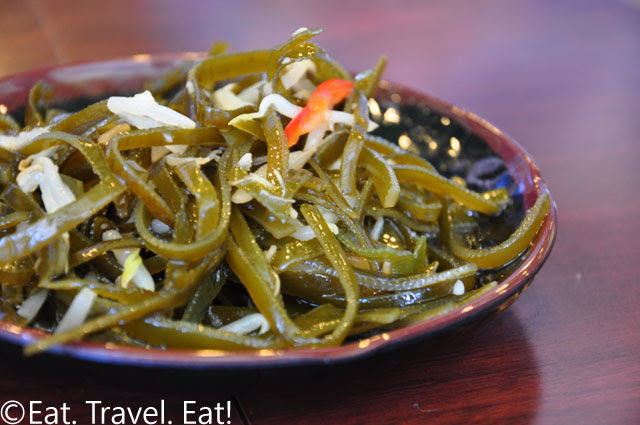 Our starter was Seaweed and Bean Sprout in Garlic, Vinegar Sauce (1.95 USD). This was pretty good, with a very, very light hint of vinegar and garlic. We do however prefer the bolder flavors of the seaweed salad available at Mandarin Noodle Deli though, especially when combined with their cucumber salad marinade. 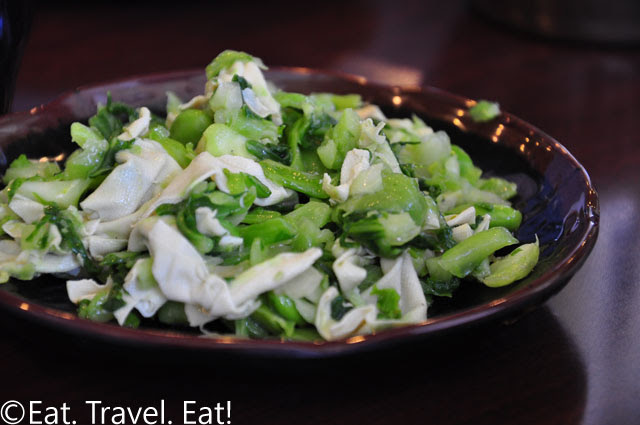 The Bean Curd Skin with Mustard Greens and Soy Beans or Xue Cai Mao Dou Bai Yeh (2.15 USD) was a cold version of the usual hot version, with plenty of mustard greens and not so much of the edamame or the bean curd skins. This was pleasant to eat, with the mustard greens not even being bitter at all. However, the serving size was tiny, and I wished for more bean curd skins. 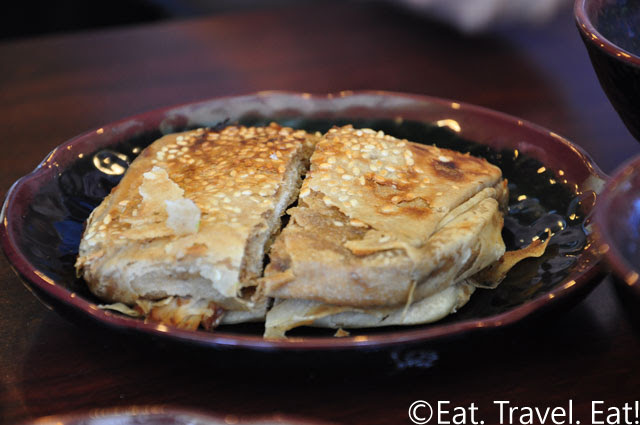 As seen in other tables and online, people order lots of their items involving bread. Thus, we ordered their Jiang Rou Shao Bing, or Chinese Sesame Biscuit with Sliced (Soy Sauce) Pork (2.65). The shao bing had several layers of fluffy dough and was very light and easy to eat. Inside was a filling of shredded pork which was seasoned with some hoisin sauce. Nothing quite spectacular, but I did like the fluffiness and the multiple layers in the biscuit. 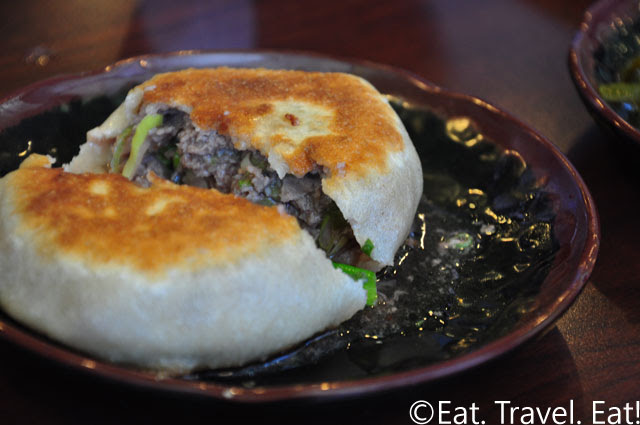 In addition, we also tried their Beef Bun (1.50 USD), as pretty much every table here and in Irvine was eating it. It definitely housed a lot of juice inside, as you can see by the photo. My one bite was a dense and crispy bread exterior with mound of extra juicy and salty ground beef mixture. My other dining companions felt this was quite salty and fatty- definitely get something lighter to balance out the meal if you plan on ordering this. 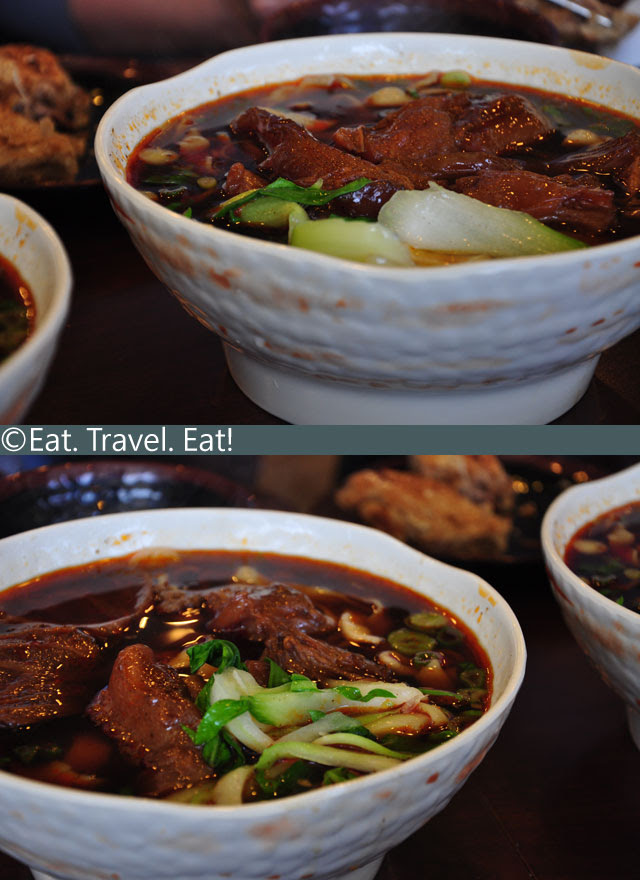 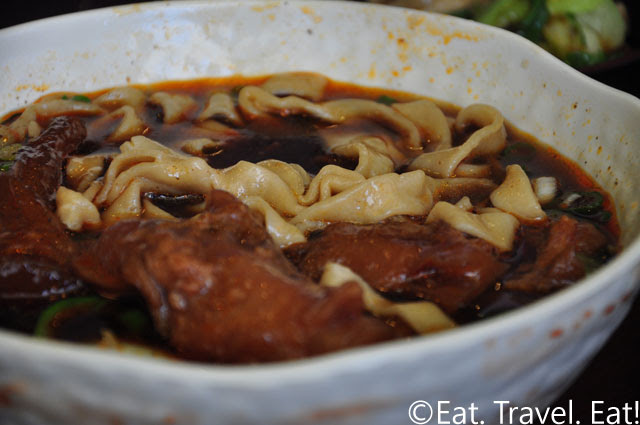 These bowls of noodle soup were clearly superior to the Irvine location. Not only were the bowls larger, the servings of noodles, beef, and vegetables were all much more plentiful compared to in Irvine. The soup had much more beef flavor in comparison to Irvine, and was almost comparable to Mandarin Noodle Deli on a bad day (passable but I want more flavor). However, what was different was that it was quite spicy with a layer of chili oil, which we were not accustomed to. I was sweating after eating this. The thick noodles were very chewy and were from the same dough as they use for their dumplings. However, they were a bit easier to eat as although they were broad in shape, they were not too thick. Good, but I still got tired of the chew by the time I was finishing the meal. I'm sure a thick noodle lover would enjoy them though. They were generous with the stewed beef pieces, giving us plenty of pieces as well as cutting each piece larger compared to the Irvine location. Plus, each piece was tender and had soaked up the beef flavors in the soup. Overall, I would say the beef noodle soup was decent, but the spiciness level puts us off from eating it again. I am a wimp. 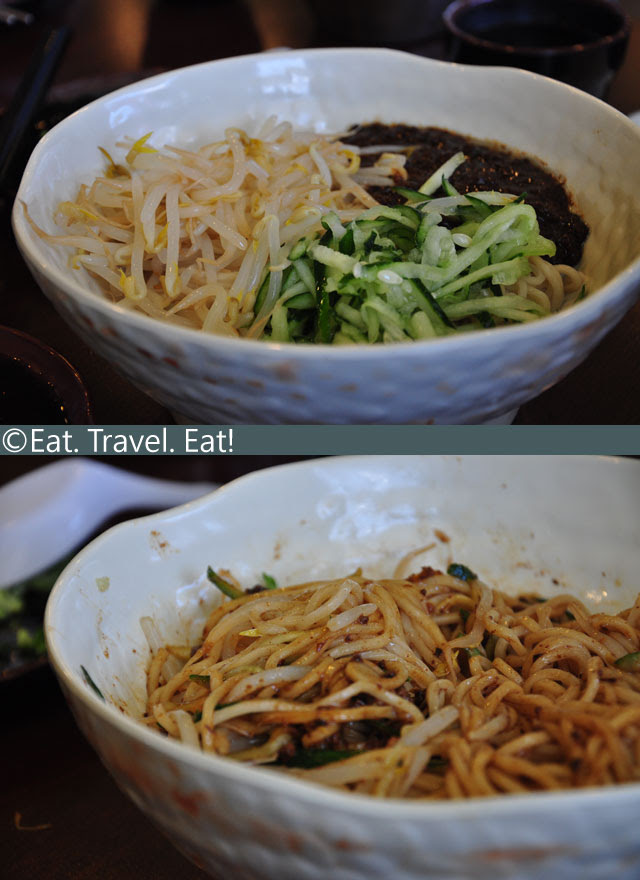 On the other hand, the Noodles with Ground Pork, Ben Sprouts, and Shredded Cucumber, or Jia Jiang Mian (6.25 US) was relatively flavorless to me. However, that is my opinion about these noodles all the time. Whether it be here or in Beijing at Crystal Jade, I end up calling them flavorless as the ground pork mixture has way too little sauce/flavor. Mandarin Noodle Deli is the only restaurant where I think there is enough flavor, but the fried ground pork puts me off.

We did order the thin noodles as the MND waitress recommended us to, and they were very thin, chewy, and had a nice pull. Cucumber and bean sprouts added some veggies into the dish. It seems like we might have enjoyed the thin noodles if they were in the beef noodle soup. Ha! 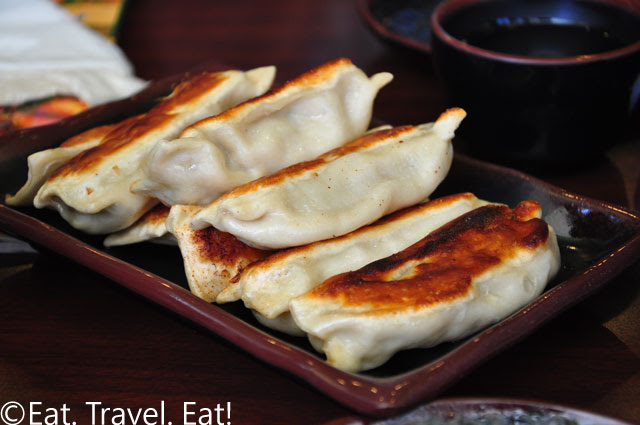 Last but not least, we also ordered a plate of their potstickers, which featured a thick and chewy wrapper and a lightly flavored pork and cabbage filling. These were cooked in my opinion for too long, as seen by the dark brown color of the potstickers. Plus, the fried portion was not really crispy either. In this case, I feel that the Irvine location made a better version.

Overall, we left pretty much the same way we did in Irvine: nothing special! However, we all agreed this was a much better improvement than the Irvine location. With the oily dishwashing though and just okay food, we do not plan on returning. After all, Mandarin Noodle Deli is just a stone a few more minutes away from here. I might return for breakfast, but there is Doe Jon Station across the street which is good also. They probably would have stiffer competition if Noodle House was still around though.

Jules @ Lovely Las Vegas said…
It is amazing how you, as EatTravelEat, always make things look so good. Even though your experience at A & J wasn't that great, by looking at your pictures (and bypassing your text), I would have thought the place would be pretty decent.
February 18, 2010

dave -nibbleanibble said…
I guess how the potstickers are cooked is a personal preference thing. I actually complain when they don't fry it enough.

tigerfish said…
I remember the A&J here when I saw the beef noodles and pan-fried beef bun!
February 18, 2010

EatTravelEat said…
Jules,
Thanks! Good lighting (this place did with its large windows) and a simple presentation always makes for good looking food :).

Dave,
Really! I complain when they get burnt like these. They didn't even get much flavor with the crisping up.

Tigerfish,
Aha, so that is what A&J is famous for. I though so.

EatTravelEat said…
SinoSoul,
The D90 is doing a great job most certainly, although I can still learn more about it :). I'm just using what A&J says about their items in English for now but I added "soy sauce" for the shao bing item thanks to you! Pinyin usually comes from my companions and me as I can't recognize enough characters yet :(.
February 20, 2010

joanh said…
the food looks great, too bad it's just ok... then again nothing can compare to the good eats here in taipei!! hahah!
March 05, 2010