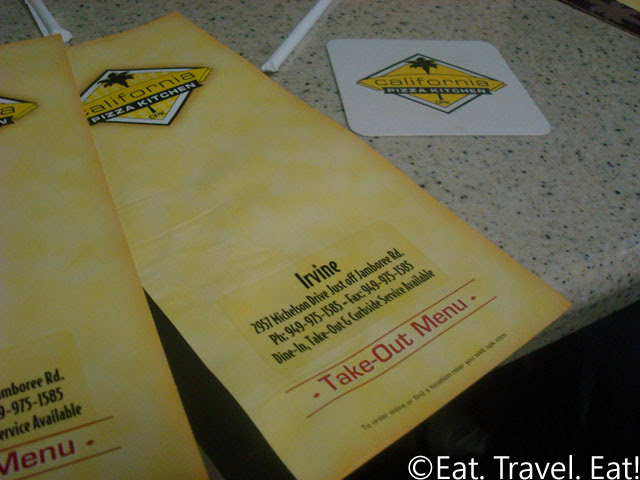 (All exterior photos blurry so this is what you get! The exterior is actually quite modern and pretty though)

Following the workshops in the conference, our group went to California Pizza Kitchen, like the group did last year for dinner. According to the group, they have gone to CPK almost every year they have been to this annual conference. I find that quite interesting.

Interesting tidbit? While one of the group members was going to park their car, a Ferrari came by. We let the Ferrari have the spot and looked at the car after we parked. After all, even in Irvine, it is not everyday you see expensive cars parked. Plus, this convertible had the top cover off, so we could see the interior. Happy car fans are we. 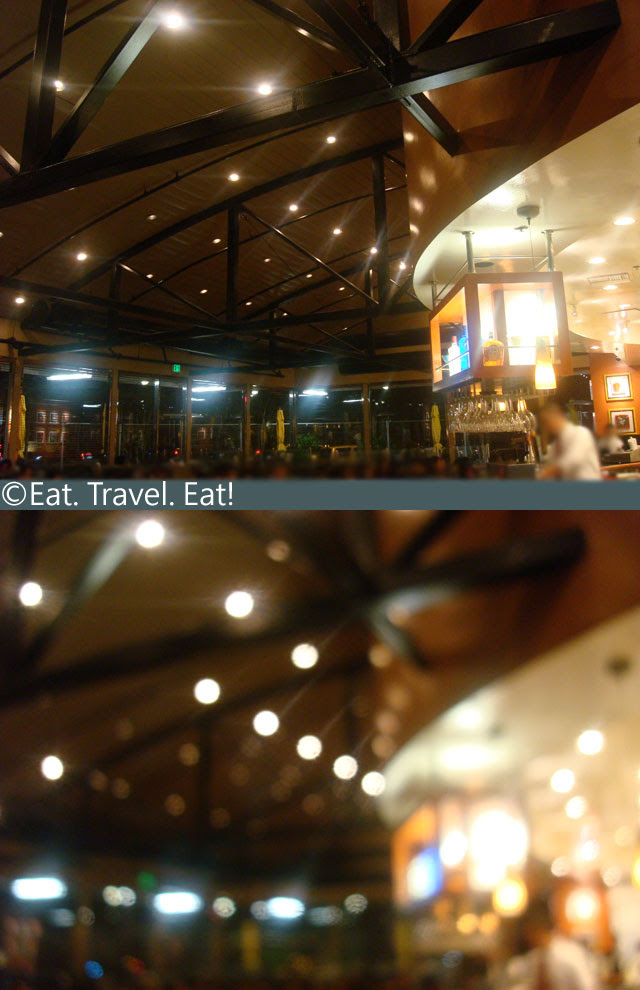 Interior: 1 fine, 1 ultra out of focus! The Sony W90's focusing is lacking as time goes on... :(
We went into CPK and then they had to prepare for our table. Hmm...I guess that my group forgot the suitable action of making a reservation for a large group. :( Funny thing is, they talked about it in the conference. How hypocritical. 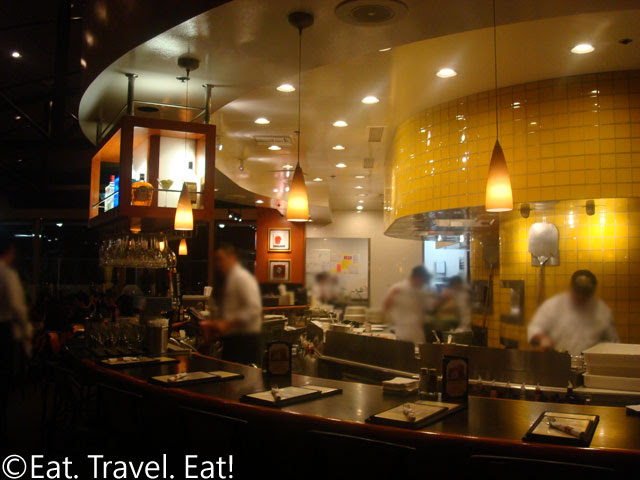 In return, we waited for almost an hour for our table to be set up outside. Unlike Souplantation, CPK's tables were made of metal and thus were heavy to move around. 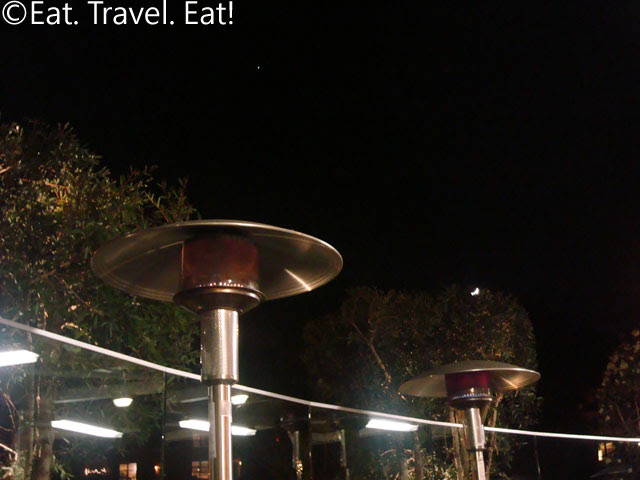 After the wait, we arrived at the outdoor patio, which was not really that chilly with all the heaters on. In fact, the heaters almost made us too hot instead. On each person's plate there was a take out menu for us to look at. No real menu- real menus were only the beverage menu. 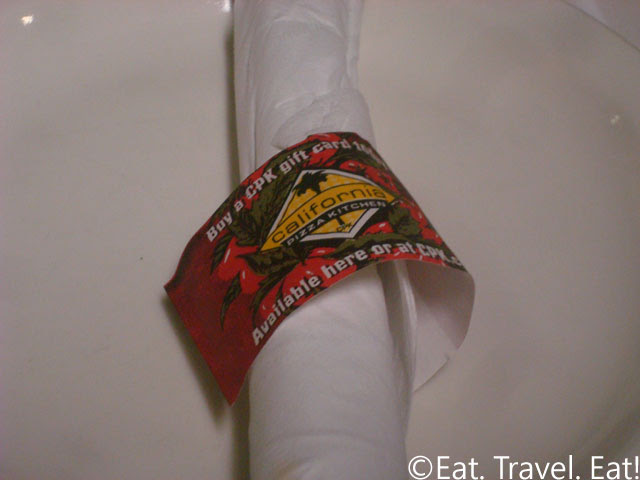 (Special Holiday Gift Certificate Advertisements- you can get 2 50USD gift certificates at Costco for 79.99USD too! (I do that now)
So, after about another 10 minutes or so, the waiter came out asking for drink orders. After the drink orders, the drinks arrived in another 10 minutes. This is slow, right? But my group did order quite expensive drinks like italian soda and pineapple colada. Not easy to fulfill all those orders! I ordered a simple glass of hot water, which they forgot about until I asked again. After all, we were eating outside already in the cold Irvine evening!

After another 5 minutes, we started to order. I ordered a simple BBQ Chicken Pizza. I debated on trying something not reviewed on the blog (or that I already took pictures of but have not posted yet to the blog) but could not make my mind on something else. During this ordering process, I also learned that you can split your toppings in a pizza so you could get two different toppings (almost like getting two halves from two different pizza)- one of the members of the group did this as he wanted both the Santa Fe Chicken and the Cheeseburger Pizzas (new product). It would cost an extra two dollars though for the split. 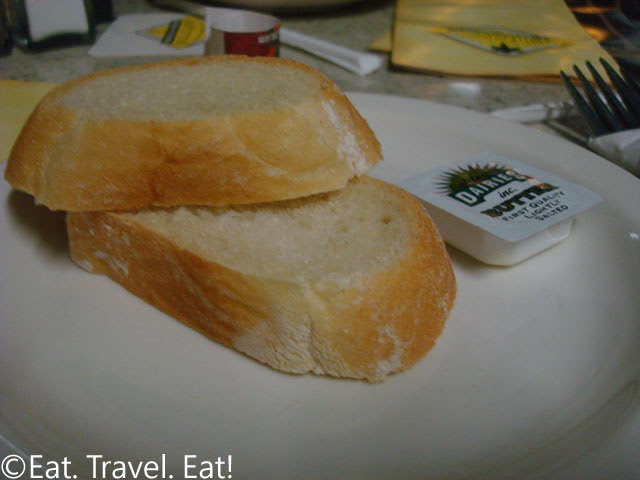 10 minutes later the bread arrived, and we were hungry. Members in the group complained about the long wait times for things like the bread in comparison to the Arcadia location, but that is one of the consequences for not reserving a table. :) The bread however was way better than the Arcadia location. The crust was a bit chewy while the inside was soft and tender. Delicious with butter, or just simply alone.

Another 10 minutes later food started arriving and the server made drink refills again. My food did not arrive for another five minutes. The servers were way too busy with drink refills of course. Who said refills meant 6 refills of a glass of soda, with flavor changes in between? Crazy. So when I asked for a refill of my hot water, it never came after I finished my pizza. So I requested again later on and got my wish fulfilled. 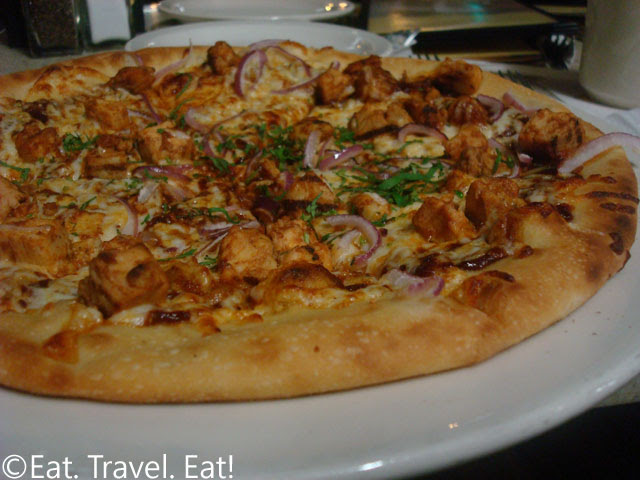 As for the pizza, it was quite good. Simple but filled with slightly peppery pieces of firm chicken (not soft/ ultra tender like Arcadia), crisp red onions, basil chiffonade, and a tasty BBQ sauce. The crust seemed to be more fragrant with a bit more bite to it compared to the Arcadia location which I liked. 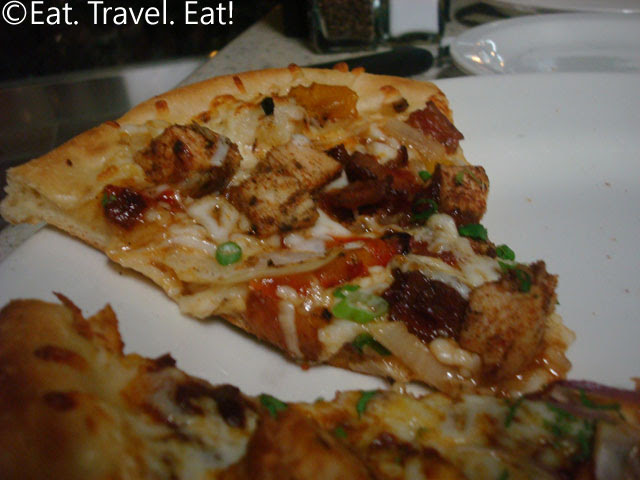 In addition, I also exchanged a piece of my pizza for a companion's Jamaican Jerk Chicken Pizza. Boy was it spicy! I know this is a spicy pizza, but this was very spicy (due to the sauce) compared to the Arcadia location. The chicken had a lime pepper seasoning to it, and the bacon added crunch and a textural contrast. On the other hand, the sauce was a mix of spicy and sweet. It seemed like as if there was honey added to the sauce- probably it was.

In the end we were full but the service was not very great. Now, some lessons:
1. Don't eat outside if no one else is (we were the only ones out). If you do, it is up to the server to come back to check on you. You can't flag a server now since you are outside; you have to go indoors which will annoy customers sitting next to the outside door.
2. Reserve a table if you have a large group. This is definitely of course should have been done earlier. We waited for a long time for them to set up- and you can not blame them either, as those tables were quite heavy.

As for the food, good as usual for CPK. If you like CPK, the food here is as good, if not better, compared to other CPK locations.

noobcook said…
pizza looks much better than the ones here. Yummy looking ^
March 17, 2010

joanh said…
i used to be in love with the tequila fettucine and hummus, but now it's the sicilian thin crust. kinda miss it though there are a bunch of new good pizza options now here
March 17, 2010

EatTravelEat said…
Noobcook,
There's more to look at when I get to posting my other CPK post :).

joanh,
Tequila fettucine? Never saw that on the menu. I like the sicilian thin crust pizzas too- very nice but also a tad more expensive.
March 17, 2010

Jules @ Lovely Las Vegas said…
Despite some questionable service, it does look like/sound like some good grub... I will have to give it a try in Las Vegas.
March 21, 2010

EatTravelEat said…
Jules,
CPK is usually good in terms of service and food and I am quite sure the Mirage location will be okay. Passed by it several times and it looks just like a normal CPK.
March 21, 2010