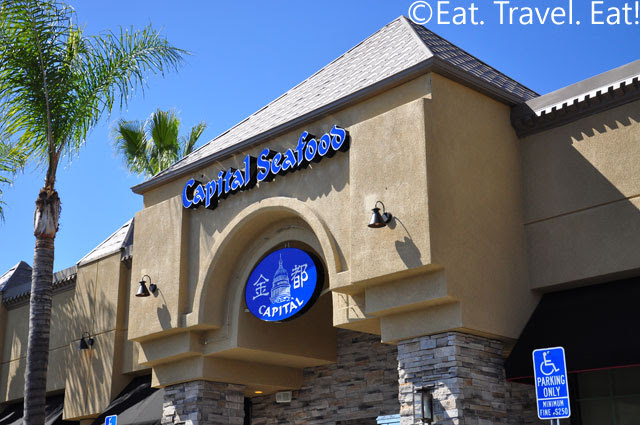 Read my full post on Capital Seafood- Arcadia HERE for more menu items and photos of the place. This post provides background information.)

Replacing Tony Roma's and Fusions, Capital Seafood is an almost unusual restaurant coming to the area. Who would have expected a dim sum banquet style restaurant to even open in Arcadia in a different location compared to the rest of the competition? Located in the densely packed hotel section of Arcadia, Capital Seafood is one dim sum restaurant in the sea of mainly Western restaurants and just a handful of Asian restaurants. Untypical? Yes. There are only two other Chinese restaurants nearby Huntington in this part of town- Bean Sprouts, and Golden Dragon (old favorite that became not so good).

Normally I never do posts without the pictures of the food, but a full posting is not coming today. Rather, I am just giving you the first impressions my dining companions had eating dim sum there. I got to eat some things they brought for me and I will tell you about those items.

As for what is important and very different about Capital compared to Hop Li or Full House, the two other restaurants that serve dim sum, there are plenty, including:
-Tiered dim sum menu: It is not one price for everything. Thus, most items are more expensive compared to Hop Li or Full House whether it be during the weekday or the weekend- by a large margin too. However, in return, you get better quality. A: 1.88USD. B: 2.88USD. C: 3.88USD. Some other items are listed and are not part of the A,B, or C listings, like porridge and noodles.
-No carts: You order via a menu, like you would at most higher end dim sum restaurants today whether they be in the United States or in Asia. However, occasionally some waiters come out with trays of food which you can get immediately from them rather than ordering.

What my dining companions complained about was firstly the dishes- they were a bit dirty and not too clean. Being just the second day of opening this was a bit unusual. In addition, some of the employees only spoke Mandarin, not Cantonese. This was also quite unusual as Capital is a Chiu-Zhow style restaurant and a dim sum restaurant, where it is pretty much expected that employees speak Cantonese and Mandarin- especially with the fact that this is Arcadia, and not some area where there are little amounts of Cantonese/Mandarin speakers. There were also a large number of employees at the restaurant and many just watched my dining companions eat. However, the service aspect was not professional, with requests being forgotten even when there was just a few people eating in the restaurant.

Even intriguing were the condiments. Basic dipping sauces, like chili sauce, were NOT available during the second day of opening. Unusual? Yes. Even the Monterey Park location had it (to be reviewed). A request for chili soy sauce was also forgotten even when the employee boasted about it being freshly made in house.

As for the food, it was pretty good, with high quality ingredients used. There were lunch specials in addition to just the dim sum menu which brought in congee, noodle soups, and stir fries. Their wonton noodle soup was different compared to our current favorite, Tasty Garden. The soup was overflowing with flavor from the broth. Usually, the broth at most SGV restaurants is bland and lightly flavored, but here those exact flavors were concentrated and intensified, flavoring everything in the soup. The noodles had a nice pull and chew, and the wontons were as good as Tasty Garden's, if not better. They were smaller though.

A vegetarian rice noodle roll had multiple thin layers with a filling of sweet shredded carrot, wood ear, and baby corn. The quality of the rice noodle sheets explained the 2+ dollar expense compared to Full House or Hop Li- they were nicely thin and chewy. Of course, I need to try this in person to see the full potential.

Spinach dumplings consisted of a tapioca exterior with the vegetarian fillings with spinach. Simple, but large and full of delicious veggies. Chiu Zhou Fun Goh had pieces of pork, dried shrimp, peanuts, and more. Each ingredient was identifiable, unlike some other restaurants. The Shu Mai was also bumped up in quality, with small pieces of meat instead of ground pork with lots of fat pieces (Full House). A small bit of masago was added on top for color and extra flavor.

I also had some pieces of Yang Zhou Tofu and a mixed mushroom and broccoli stir fry. The Yang Zhou Tofu was excellent, with a eggy, tender interior and a eggy, crispy outer layer. On the other hand, the mixed mushroom and broccoli stir fry was also just as good with plenty of flavor to go with rice, but the mushrooms were fried.

So, overall? Good food, but more expensive compared to Full House or Hop Li most definitely. The thing that brings it down are the employees. Hopefully, by the end of this month, they will have learned more and have experienced more to provide better service and professionalism. A better, full post will come in the following months, when I have taken plenty of pictures of the inside of the restaurant and the food.

EDITED 27 March 2010: Just went to Capital today and I can definitely recommend it now. It's going onto the Excellent Places to Eat list for sure! Probably the BEST option if you don't mind the price for eating dim sum in Arcadia. During our visit there was one lady who seemed to only speak English but other than that there was no language speaking problems. Service was pretty good other than a slow check. Full review coming in a few weeks; after next week I have Spring Break!

Protocol Snow said…
Have you tried Mission 261 in San Gabriel yet? That is by far my favorite dim sum place in SGV. Might be a little more pricey, but I think the quality is worth it. I'm doing the happy dance because I just found out it re-opened after being closed for quite a few months.
March 24, 2010

kirbie said…
Thanks for the quick review. I saw the sign for it when I passed by the Irvine location and was curious as to how the Arcadia one would be.
March 24, 2010

EatTravelEat said…
Protocol Snow,
Yep, many times :). We know the owner and we have had dinner and dim sum there before. I guess I'll need to visit it soon after I get all my work to do sorted out!