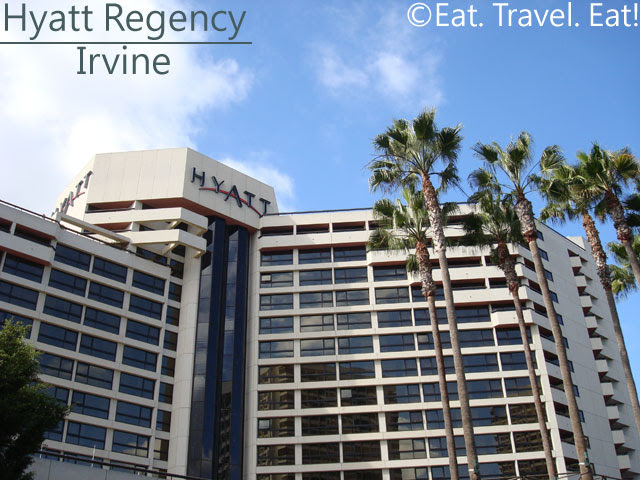 After about four months from the initial visit I am finally going to write about this place! Typically, I have written my reviews as soon as I have finished visiting each place, but with a large backlog and the need to now watermark photos, this is not happening quite quickly enough. With extra things to do now compared to before, it is not easy. However, there are benefits of writing out things later. Writing about a place too quickly brings you a big sway of view of what you think the place is like. It is not only until a few months later that a true point of view of the hotel is really established. For example: Pelican Hill- awesome hotel as stated in the review. But a few months later, we feel it is a beautiful place, but not worth staying for people close by as it feels too much like a home (then stay at home, right?), and the beds are not comfortable enough. See, our minds change. What we feel now changes later. 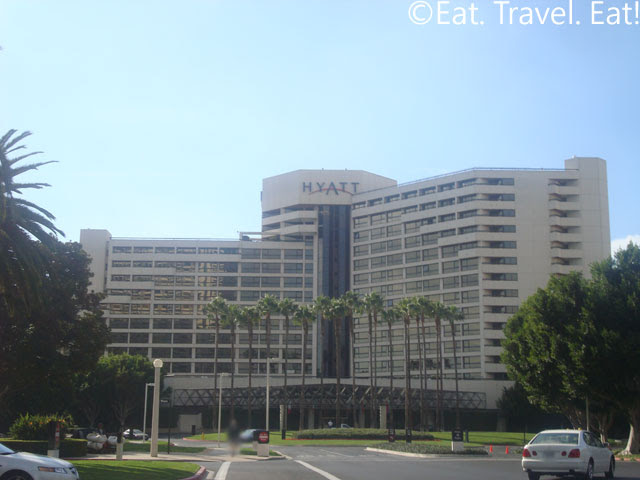 (Another Exterior Image)
You can tell what is old and what is new on my blog anyway now. New photos usually are taken by the Nikon D90. Older photos were taken my Sony W90. I did have the Nikon already by this time, but it felt safer to bring a regular point and shoot camera so the Sony went into my pocket. I thought it would also be awkward to bring a non-pocketable camera anyway, but plenty of people had big cameras, some outfitted with professional lenses too such as the 70-200mm f/2.8 lenses. Big!

Anyway, a part of a conference that I attended during November, I was able to stay at the Hyatt Regency in Irvine for one night. I was thinking about staying here in the past for a fun trip to the OC with UCI being the main topic of the trip, but the reviews on Tripadvisor were not all too positive and the candid travelers pictures were not very nice either. Bedbugs? Bites? Really?

The planners for the conference basically summed their idea of the hotel like this, "It is a nice hotel with an iHome to plug in your music players. And it's a Hyatt, so it will be nice." Fine. Tripadvisor didn't say good things, but I wasn't coming for the hotel anyway. 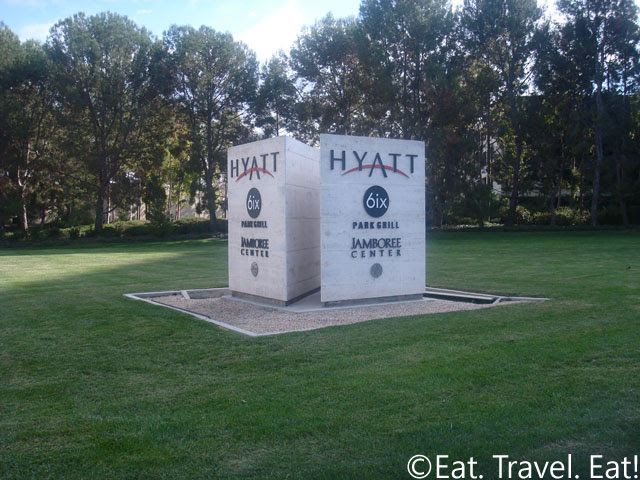 We set off as a group of 20+ on 7AM in the morning and arrived at 8AM. Signs throughout the property, similar to this sign, welcomed us into the hotel and smaller signs pointed the directions toward the Hyatt. 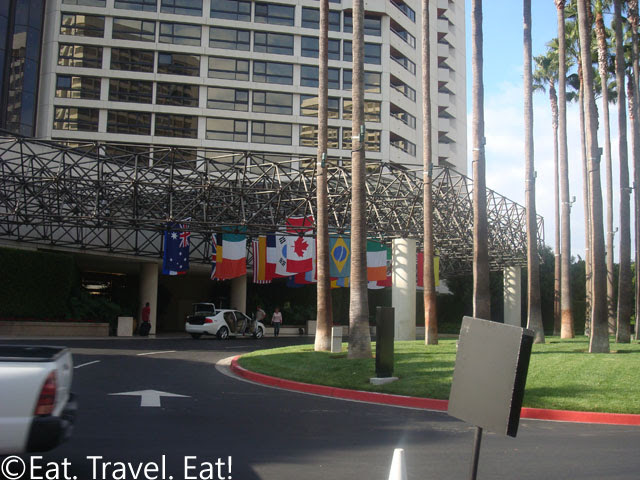 Soon enough, we were approaching the porte cochere, which does seem to be a highlight of the hotel. They put this on their hotel main page and the professional photos have plenty of pictures of this porte cochere.

When we actually stopped the car and got out, the flags came into full effect. They were beautiful, large, and oh so colorful! Also there were large Hyatt Regency busses and vans which I never found what they were being used for.
A bellboy opened the glass doors for us and we were in the hotel! 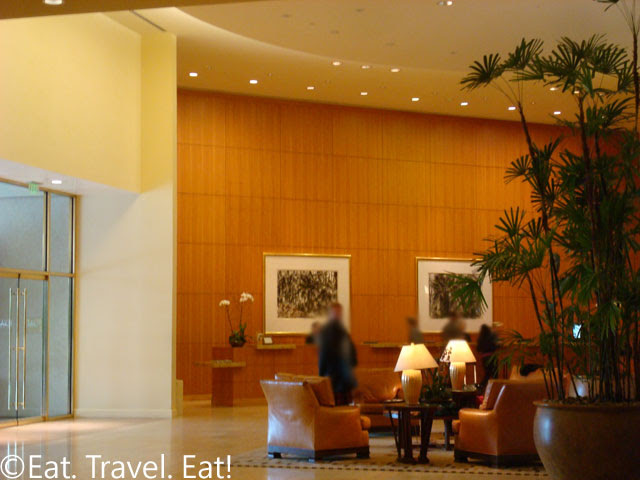 Inside the hotel, it was clear now how the professional photos compared to the real thing. They really look quite different, especially when it is not sunny or bright as seen in this photo. The lighting is very yellow compared to the photos. With the light being dim and yellow, I was about to sleep! Not that you would be hanging out in the lobby for long, but I did for about two hours as we were waiting for the rest of our group to arrive and check in. 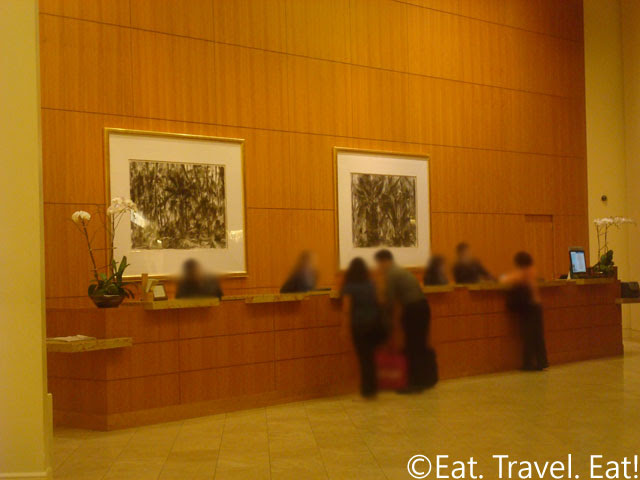 The check in counter was quite simple- slabs of wood and stone with orchids. Makes for a simple and elegant approach to the hotel. Of course, the color choice kind of makes it seem old though. 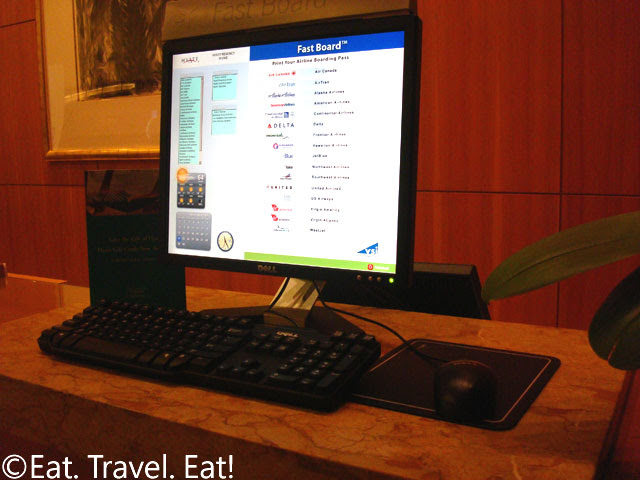 To the side of the check in area is a "Fast Board" computer where people can check in and print their boarding passes. We used this a few years ago at the Grand Hyatt Seattle where this feature was also available. It really is fast, and simple too. Use it if you need it; most people here never used it at all. 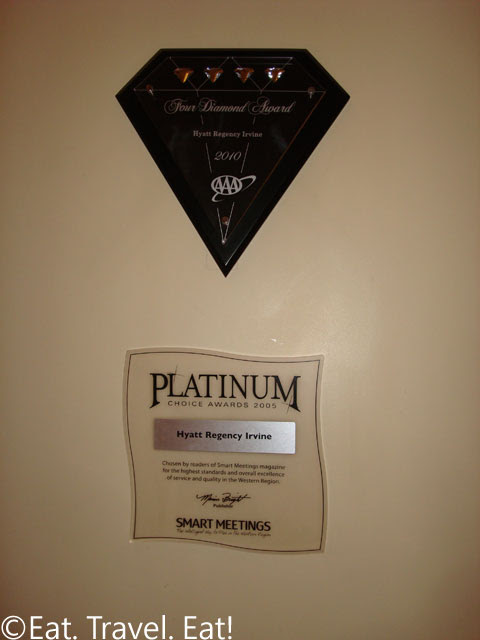 And to the other side, placed simply without any frames whatsoever are some of the awards and recognition that the Hyatt Regency Irvine received. These are the AAA Four Diamond Award and the Platinum Choice Award 2009 by Smart Meetings. 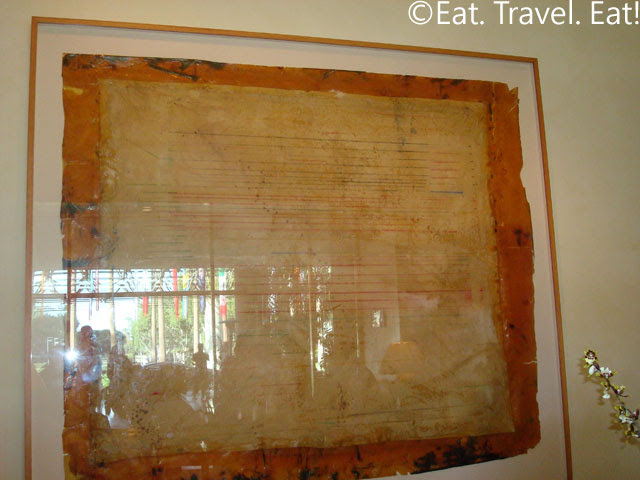 In the center of the lobby was this painting, which I was obviously too lazy to take the time to take a decent picture. Such paintings were also located throughout the hotel- some even had a card describing the painting and who did the painting- kind of like the Manchester Grand Hyatt in San Diego.
Anyway, while we were waiting for the rest of the group, we took some spots at The Cafe, a casual dining spot near the lobby across from Bar 8. 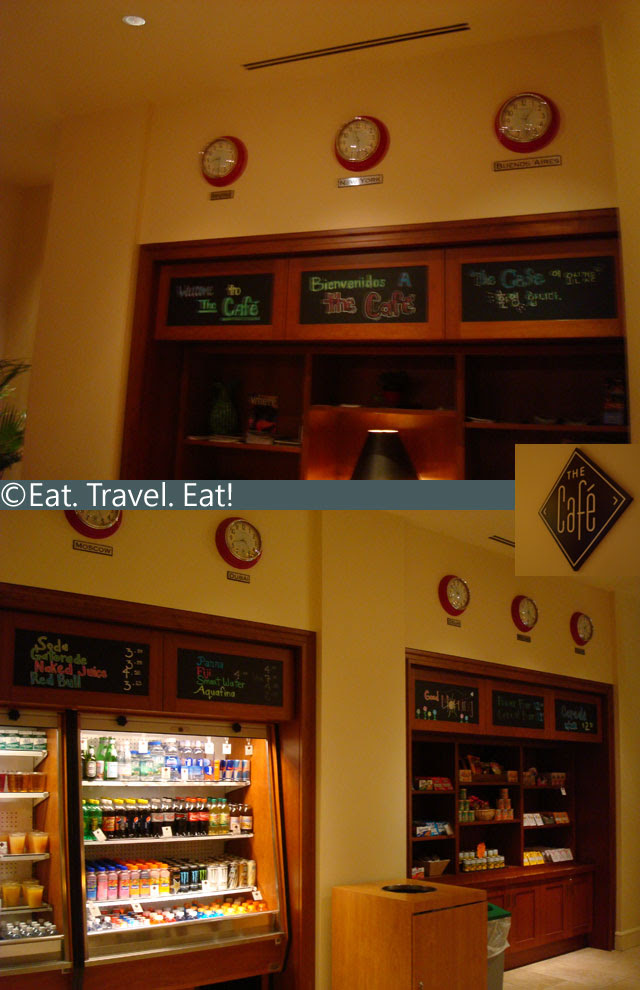 It was a pleasant but dim-lit atmosphere- dark enough for me to get blurry photos with about a 1/5 second shutter speed. It seemed like a Nordstroms Ebar but much spread out with plenty of seating. Of course, the food was not very cheap- quite similar to the Ebar too in this sense. Sandwiches and salads were about 8-10 dollars. Hot items like hamburgers were around 10-15 dollars. A small glass of juice? 3-5 dollars. At this point I knew I was going to drink plenty of juice during the next day's complimentary buffet breakfast. I do so anyway, as I have noticed throughout my travels. The norm for me is usually at least 3 cups of a juice, milk, or water.

As for what was available other than food and drink, the first photo of the two above showed the shelf which had plenty of coupons and information of where to eat and play. Some of these places I recognized thanks to the likes of Edwin Goei of Monster Munching with his many reviews of places in the OC. 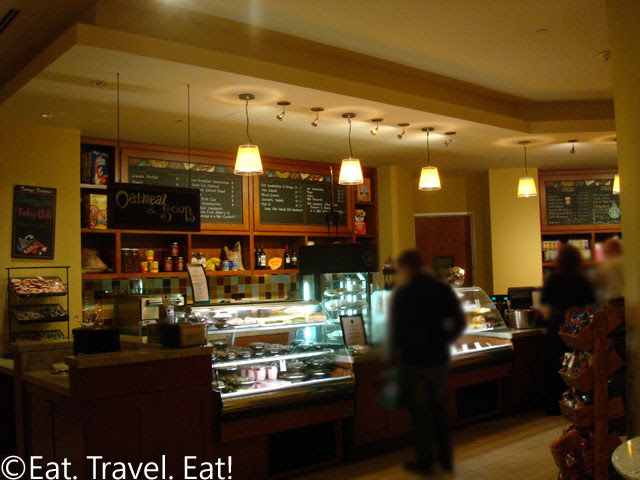 During the morning, there were plenty of people in the Cafe. Some came for internet access. Some came to have a place to sit down as the lobby was filled with people. Others came for a quick breakfast of oatmeal or breads and pastries. 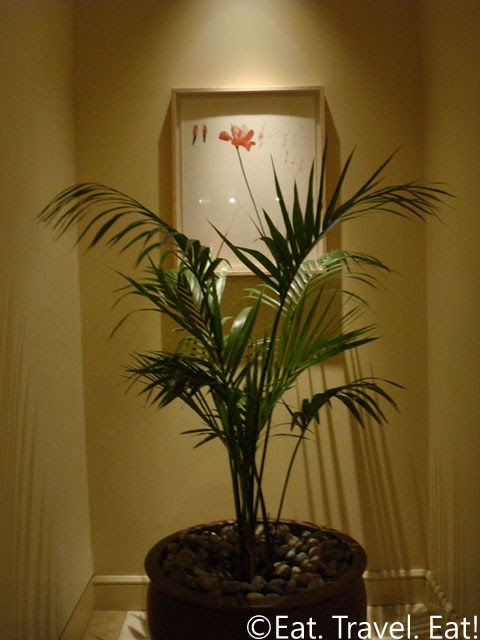 A small plant was placed to the side for some greenery; I took a picture of it as I was bored. 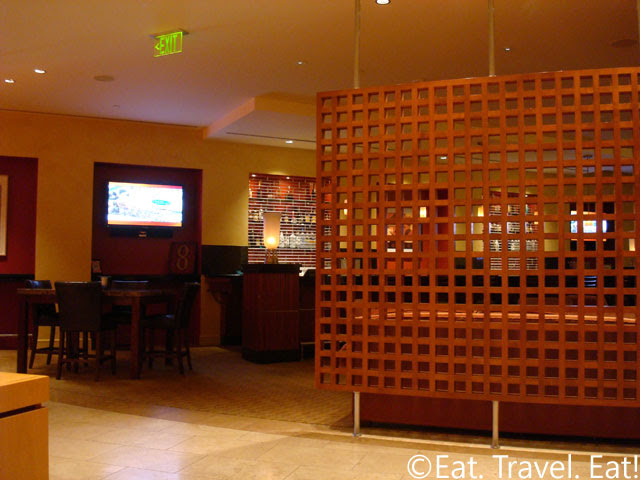 Bar 8 was across the Cafe and was closed during the morning, of course. It was dark with no lights on, with the exception of the TV which was nice to tide over the time. By the time the other group arrived which were in charge of check in, the rooms were not ready yet due to the large attendance, so thus we went to the conference halls where the main events of the day would be taking place. 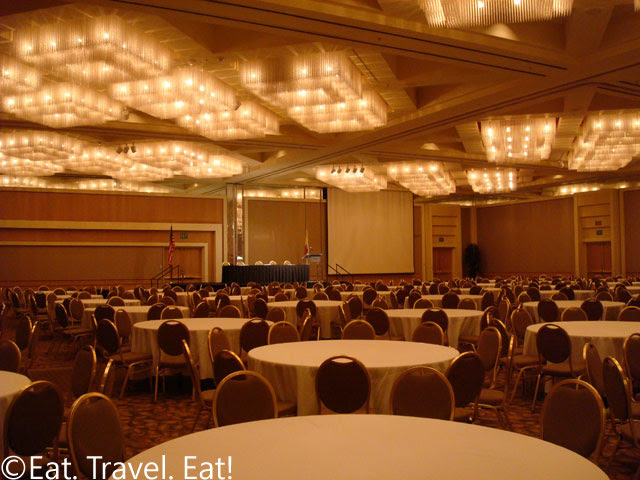 I will keep it short on this part. If you are planning a event here, know that the interiors are quite old. The lighting was dim for our events (not good while listening to the speakers it felt like a good time to sleep instead!), and the chandeliers were of a old variety in the large halls. The side halls (e.g. Trabuco) were much brighter and probably newer too. That would be a better place to hold a meeting of sort, but those rooms were smaller. There are spotlights and different lighting available so it maybe functional either way; this ballroom you see above, set for breakfast the next day, held a charity dinner with food and entertainment during the night. 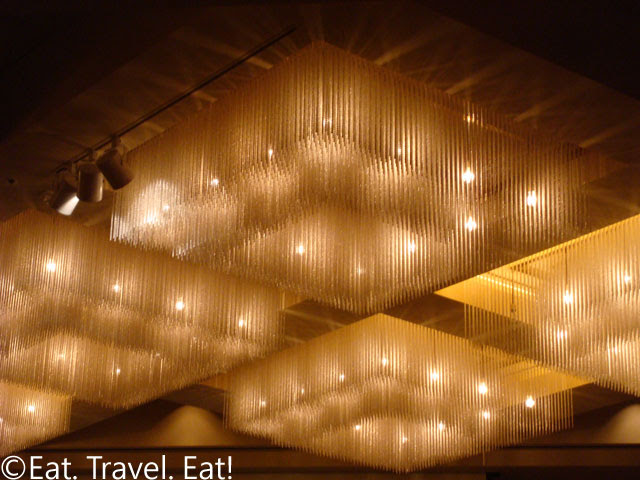 And how about another photo of the chandelier? :) 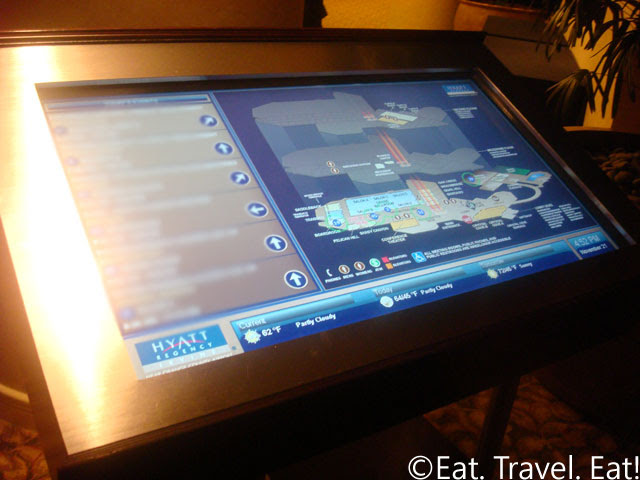 Throughout the hotel, there were digital boards like these for conference events, basically telling where every event taking place in the hotel would be. I thought these would be touchscreen, but no they were not! 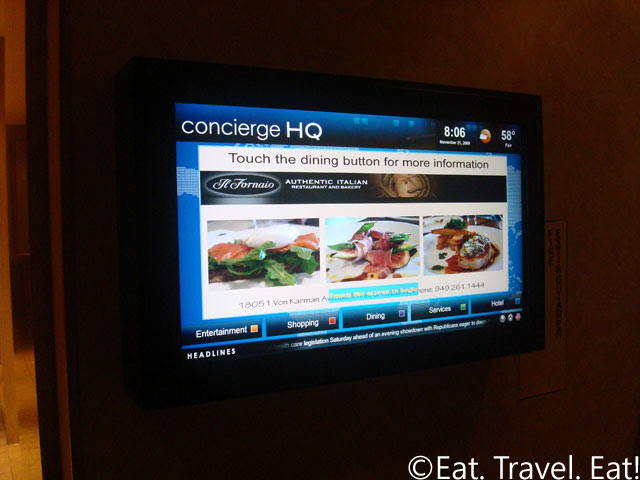 But this, the Concierge HQ, did have a touchscreen. You could use this to find addresses to different places in Irvine as well as find places to eat and play. Basically a digital version of usual paper handouts and advertisements.

After attending some of the events and having lunch at Souplantation (post to come next), we received our rooms and so up we went on the elevators, where we noticed they were ULTRA slow. 4 elevators for a 14 story hotel is decent, but slow elevators are not, especially when you are holding a conference with more than 200 people attending. Wait times for an elevator were at average from 3-5 minutes for one elevator. Especially with a big group suddenly coming towards the elevators, it was chaos. I felt quite sorry for the other guests who were staying. We conference members pretty much blocked the way out as there were so many of us!