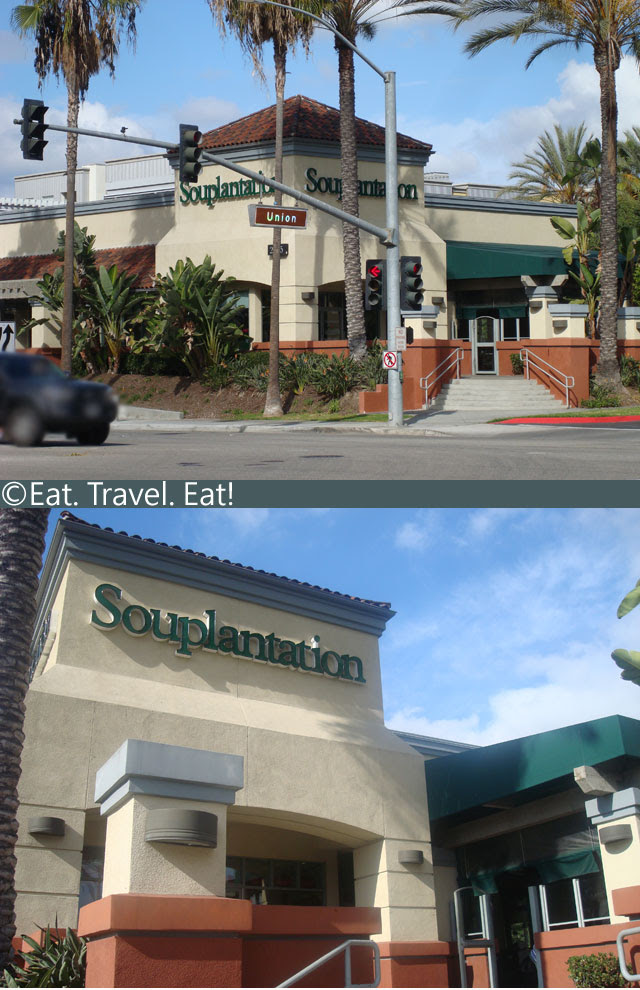 After the first session for the conference, it was time for lunch at an early 11:35AM. So, not wanting to go anywhere far but not wanting to eat at the hotel, we headed for Souplantation, which was about a 3-5 minute walk away from the Hyatt- basically just walking out from the entry to the hotel. It was just a quick decision made by our leaders on where to eat. The positives were that it was extremely close to the hotel and thus we just needed to walk. No need to arrange for transportation- always a nice thing. 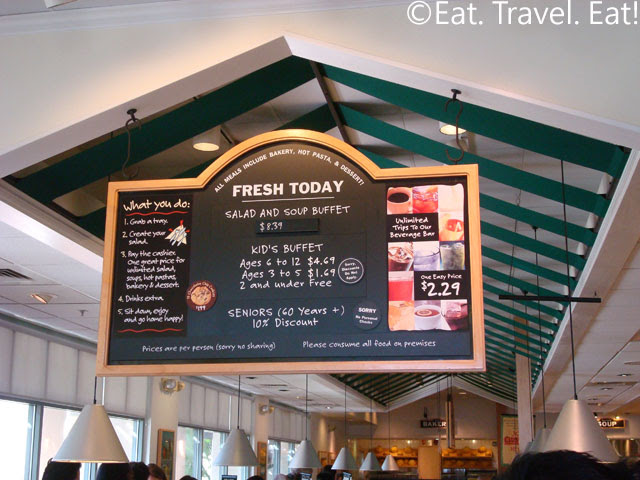 Inside, we grabbed a tray and then went to the long salad bar, filling up with as much salad as we desired. In the front was a spotlight of an employee making salad for the dressed mixed salads. Plenty of people were coming to Souplantation during that day- not only conference members were going, other people came as well to enjoy their own Souplantation experience. 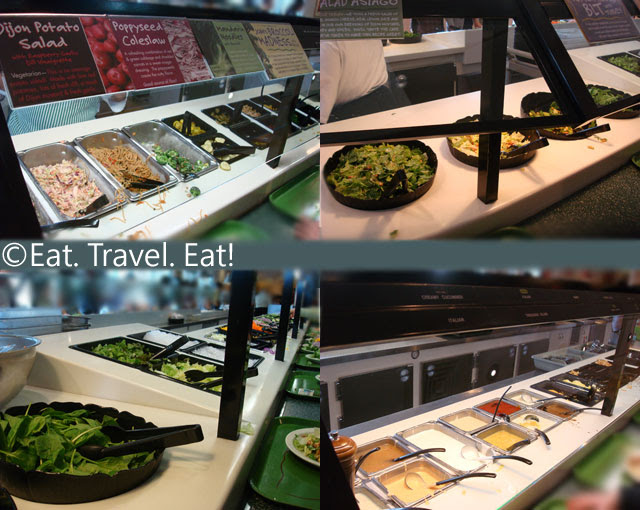 After the mixed salads, it was the make your own salad section, which had dressings, different vegetables, and toppings. Past all this was then the cashier's desk.

While I was waiting in line I took photos with the long waiting times. And what happened? After paying the standard 8.39USD for the standard all you can eat plus 2.29USD for the unlimited fountain drinks, my large group of 20+ people got the outdoor patio to sit at. Unlike CPK for dinner, Souplantation's staff only took about 5 minutes to set the table, but that was also of course because we had the utensils/ plates, and they only had light plastic tables and chairs to move around. I also helped out as well. 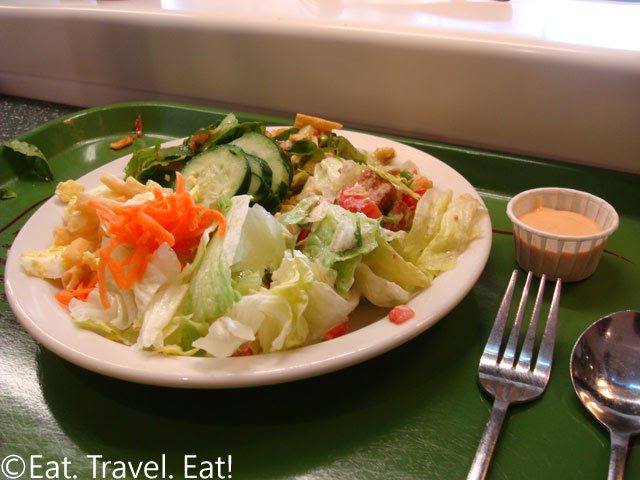 Here was my first plate and only plate of salad (as I did not know you could take taken more!) consisting of the Wonton Chicken Happiness, the Ranch BLT salad, and my own creation. Below are the descriptions of each item:

Asian Chicken Salad- Quite good actually. Slight hints of sesame, soy, and tangy flavors were in the salad, and the chicken and fried wontons added dimensions of textures and flavors. The veggies were fresh and seemed in place for the salad.

Ranch BLT Salad- Think of it as a simple mixed salad with bacon, lettuce, and tomato with ranch. It was a simple salad with ingredients I am accustomed to in a salad, so of course I enjoyed it.

My custom salad had lettuce, hard boiled egg, cucumber, and thousand island ranch dressing. All the ingredients were quite fresh and such a combination works anytime of day- so it was definitely yummy. The boiled egg was not overcooked and greyish green. 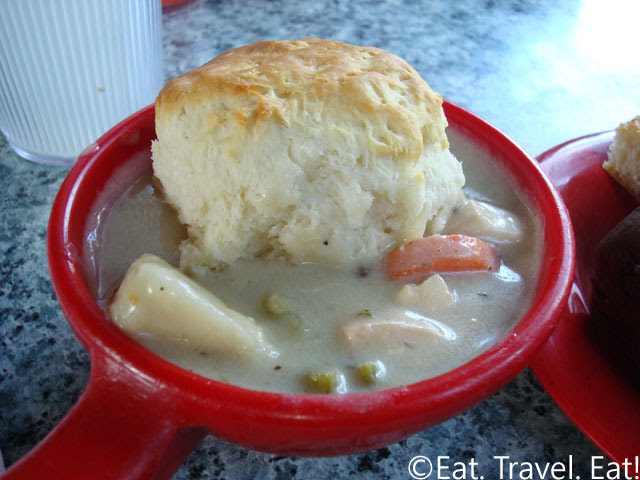 After dropping off the salad at the table it was time to get some more things to go along with the meal. My first bowl of soup was the Chicken Pot Pie Stew, which was one of their featured items back in November. This was quite like chicken pot pie filling without being so thick (like Marie Callender's version), and the flavors were similar too! Not too salty, but creamy with plenty of veggies. But where was the chicken? I had none. As recommended on the advertisements, I also had a buttermilk biscuit to go along with the stew which was soft on the inside and a bit crispy on the outside. Quite nice with the chicken pot pie stew. 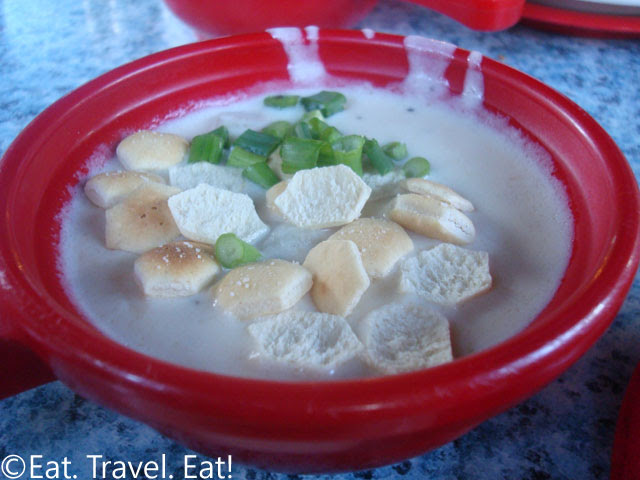 The yankee clipper clam chowder with bacon was actually quite good. It was creamy with plenty of potatoes and celery, and there was a hint of clam flavor. Where were the clams though? I was not lucky with the ladle as you see. The good thing about this was that the soup was not as salty in comparison to places like Sizzler or BJ's, but there was a definite lack of clams. More clams please! But of course, it is just a buffet and I am only paying 8.39USD for it... 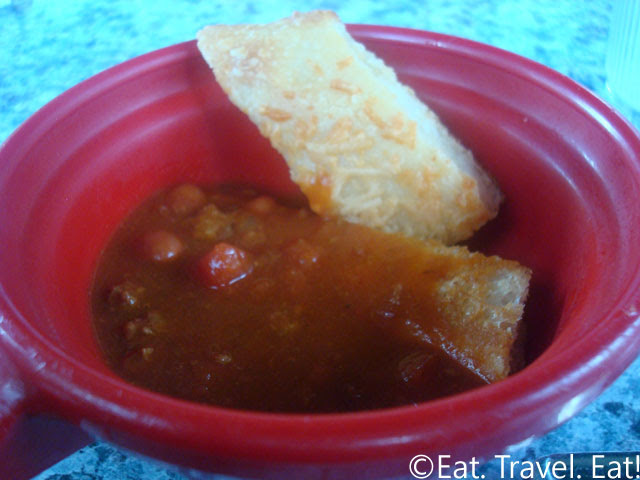 On the other hand, I did not really enjoy the deep kettle house chili, as it was mainly tomato flavor. I like a earthy chili with plenty of herbs and spices. This seemed almost like meatsauce but with a chili texture. 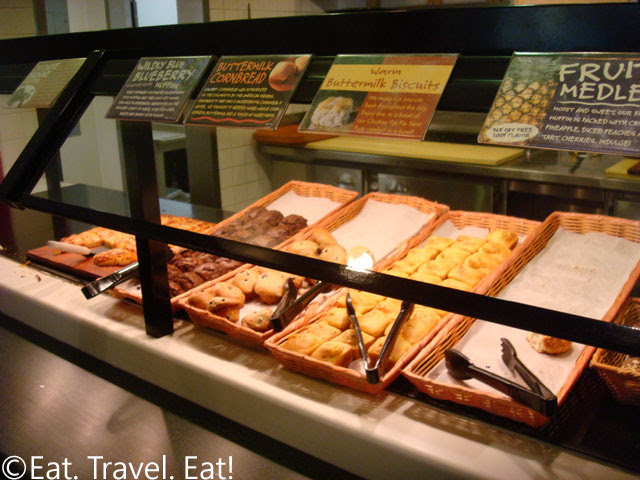 As for the bread, I mainly centered around the Garlic Asiago Focaccia, Quattro Formaggio Focaccia, and the Chocolate Brownie Muffin. All were quite nice! 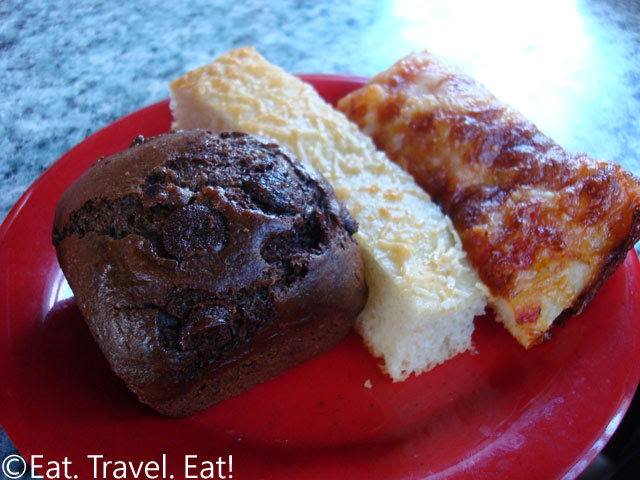 I liken the focaccias to a light pizza like bread with cheese. They pretty much are anyway! The garlic asiago foccacia is like a garlic breadstick you would get at a pizza chain without the oiliness and the quattro formaggio foccacia is like a cheese pizza with very little sauce and more bread, On the other hand, the chocolate brownie muffin is just like a cake like brownie with all the intense and gooey chocolate flavors of a brownie. So good, but also very fattening. :) 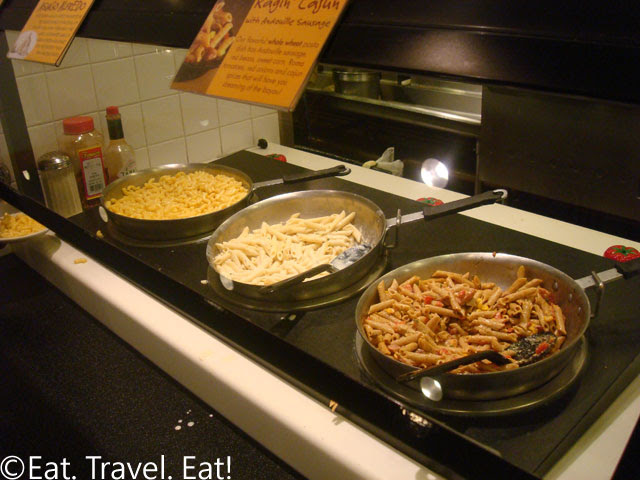 After having plenty of baked goods, salads, and soups, I went to the pasta station, where three choices were available for the choosing. What was fun was that they were served in skillets, an interesting serving choice. Do you see the tomatoes near the back of the image? They are actually timers. They switch out items every 20 minutes, if you did not know already. (I knew this after going to Arcadia's Souplantation) 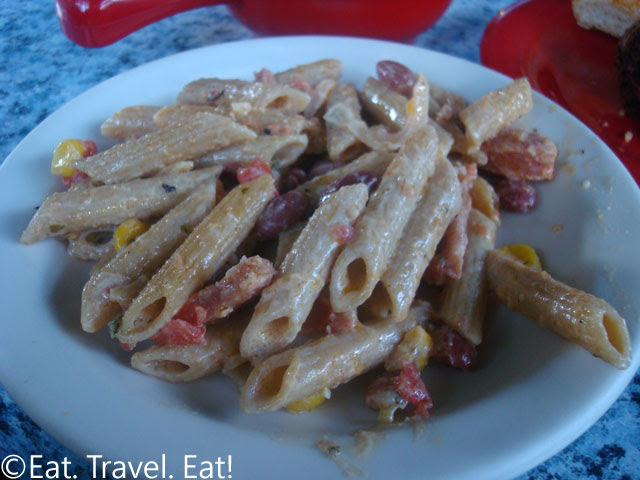 The Ragin Cajun Pasta looked to be the most appealing choice to me so I took a small plate of it. The pasta was overcooked a bit to my taste (as with most buffet pastas not cooked to order), but the multigrain brought an interesting texture that I haven't tried before. It was a bit too creamy/dry for my tastes but the "Cajun" flavors were ok, if a bit muted. I prefer a Cajun style pasta to be sauced with what you would see at the Clubhouse or CPK. On the other hand, the corn added plenty of sweetness which I liked. Corn is always a welcome addition for me! 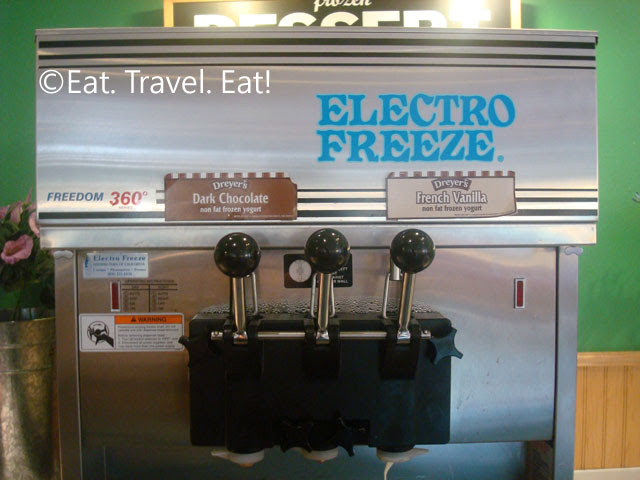 It was off for dessert and thus I went to the frozen yogurt machine to pipe an ice cream cone. However, the cones were TINY, so I just ended up getting a little. Well, that was perfect enough for me, so I was happy with that. 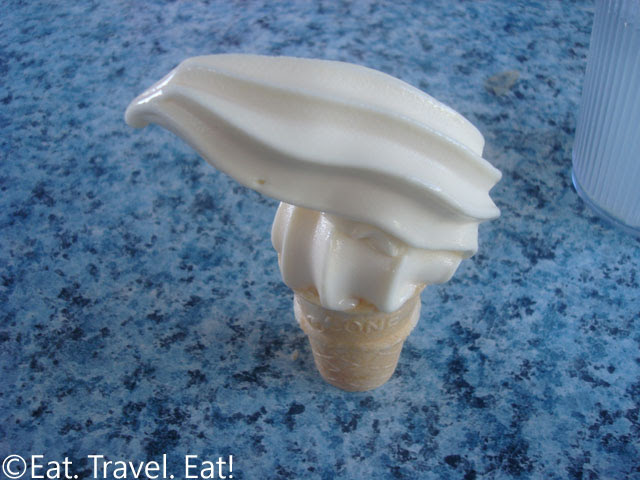 The vanilla frozen yogurt, which was made by Dreyer's/Edy's was very creamy/smooth and with plenty of milk and light vanilla flavor. It was quite comparable to Costco (much richer at Costco), McDonalds, and Yogurtland's version of vanilla ice cream/frozen yogurt. As you can see, the cone was completely not proportional to the frozen yogurt at all! Way too small. Even the pipe for the frozen yogurt was as large as the cone. Not good. Messy if you were just wanting a cone.

Everyone else in the group basically made gigantic sundaes, which were so beautiful to the fact I think they were made by professionals! Nice peaks, thoughtfully placed accoutrements. I didn't take any photos but they were BIG compared to this cone. 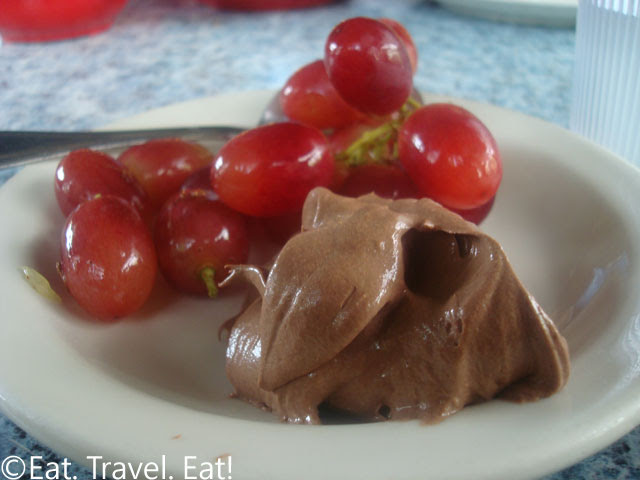 I also took a small scoop of chocolate mousse and some seedless grapes to finish the meal. The grapes were light and crunchy, but the mousse was definitely not to my liking. I don't remember the notice about Splenda, but this had it and it definitely tasted like some artificial sweetener with a ultra thick and fluffy mousse with a light chocolate flavors. As Souplantation likes to say, only 40 calories for a 1/2 cup!

Overall, pretty much a good experience here at Souplantation. It is a buffet with very good pricing at that- less than lots of other lower end buffets but very tasty in that fact on most items. There were less people here compared to in Arcadia which is nice, but the overall experience kind of depends on what is available on the day you are visiting. To make sure you get what you want, check out their website which tells what each location is serving for each day- it helps! You can also see nutrition facts and the like.

Other posts in this series:

Protocol Snow said…
Actually, you can return to the salad bar anytime you want after you're seated. You don't have to wait in line either, you can just grab a plate and directly get the stuff you want.

I used to go to Souplantation every month and still remember when it cost $6 for dinner. That was a bargain. I wish Souplantation would expand to the East Coast since I miss it out here.
March 15, 2010

SinoSoul said…
holy CRAP. I can't believe they let you take pix at Souplantation. We lived blocks away from one, and only finally visited after being coerced by double coupons... so fun, and so not.
March 15, 2010

EatTravelEat said…
Protocol Snow,
Really? So we just cut in between the two lines?

Sinosoul,
I just went to Souplantation in Arcadia with the Nikon and I had no trouble!
March 15, 2010

Protocol Snow said…
Yep, just cut right in the line, get your food, and then return to the table. Be polite to the person waiting in line though :)

joanh said…
love souplantation! always make a trip or two there when i'm in LA because my parents love it. yours has biscuits though! i've never seen that. i like the blueberry muffins and the cornbread and of course all the soups!
March 16, 2010

Wandering Chopsticks said…
I do one salad plate and get some pasta on the same plate. Half bowls of soup. Half bowl of clam chowder and half bowl of chili with Tabasco, cheese, and crumble in a corn bread.

Then small bowl of chocolate pudding and vanilla ice cream.

I only go maybe once a year? Not that often. Never seen the chicken pot pie with biscuit or I would've gotten that.
March 16, 2010

EatTravelEat said…
Protocol Snow,
Aha! So I'll definitely do that next time :).

JuliaBlog,
Thanks! I just went to the Arcadia location last Saturday.

joanh,
I like the blueberry muffins now too after eating them at the Arcadia location. Souplantation soups are great other than the fact of the high amount of sodium.

Wandering Chopsticks,
Yeah, I rarely go to Souplantation too. I've just started to go back again but I'm definitely not visiting very often unless I can restrain myself from all the food!
March 16, 2010

Dave said…
Souplantation is pretty good if you are thinking of eating healthier. But then again, you might be tempted to eat everything you can since it's a buffet.
March 16, 2010

tigerfish said…
Souplantation! I simply like this name.
March 17, 2010